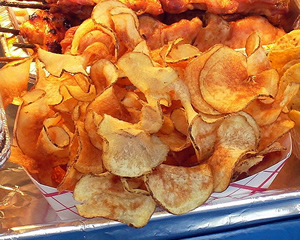 bamalibrarylady/flickr.com
Most of Pennsylvania's potato chip companies had their start with homemade chips like these.

Idaho is famous for growing potatoes that are healthy—“they’re fat-free, cholesterol-free and have only 110 calories”—and Maine is known for cultivating high quality potatoes for seed. So how does Pennsylvania fall into place with these states? They all have farming conditions that are suitable for growing potatoes, but Pennsylvania is certainly different from Idaho and Maine. The Keystone State stands out as the leader in producing the type of potato used in one of America’s favorite snack foods—potato chips. Potato chips are enjoyed by Americans as appetizers at parties, side dishes to complement favorite sandwiches, and to snack on while watching a movie.

Even though Pennsylvania’s potato chip production has been successful for almost 100 years, it remains a secret to many. With Pennsylvania being known for its agricultural successes—mushrooms, grapes, and pumpkins—it’s a surprise that its chipping potatoes do not receive as much fame. Home to 24 manufacturing plants, 16 of those being independent companies, Pennsylvania has more chip companies than any state in the nation; their production of potatoes accounts for about one quarter of the nation’s supply. Together, these companies gross over $57 million in annual sales and as a result, this potato chip heartland is ranked as the number one source of chipping potatoes in the United States.

One of Pennsylvania’s Agriculture Department members notes, “a lot of chip companies originated in Pennsylvania. There were many one-room, mom-and-pop chip companies.” Most of these independent companies began their businesses in their own kitchens, expanding into factories with an increase in demand and sales volume. Through time, more entrepreneurs saw the availability of success in the potato chip market and the number of companies skyrocketed. They spread throughout the state, growing specifically in the northeastern side of the state and into the condensed south-central Potato Chip Belt of Pennsylvania—York and Lancaster counties. 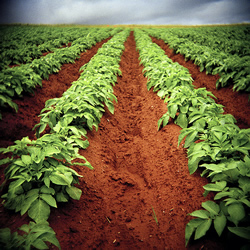 jimrohan/flickr.com
York and Lancaster Counties have hundreds of acres of potato plants each year.

The essential ingredient in producing Pennsylvania’s high quality potato chips is the potato itself. When harvesting, Pennsylvania’s farmers look for the ideal chipping potato—low moisture content, round in shape, bruise-resistant and low sugar content. Once harvested, the potatoes are stored over the winter in temperature- and humidity-controlled facilities. The potatoes are then sold to local chipping companies and processed in the customary fashion, by means of deep-frying and seasoning thinly sliced chipping potatoes. In Pennsylvania, potato chips are often fried for a longer than average period of time, yielding a stronger-flavored, darker chip.

Factors that grant Pennsylvania an advantage in the production of chipping potatoes are its soil and climate. Most of the state’s soils are fertile, yielding proper conditions for the cultivation of crops like chipping potatoes. Pennsylvania’s land is not overly moist and its soil maintains cooler temperatures because of its diverse climate. Although these factors are considered benefits, Pennsylvania’s climate also has the potential to be detrimental to potato crops. Winters in Pennsylvania, especially in the northern part of the state, can be harsh and can cause damage to potatoes. Also, Pennsylvania’s summers bring hot and humid conditions, which create ideal conditions for both insect infestations and the spread of crop diseases. In potato crops, such climate-related foliar diseases and insect problems unfortunately increase the cost of production. Barbara Christ, head of the plant pathology department at Pennsylvania State University, also notes that the soils can create difficulties—“Our soil types are so variable that quality out of a single field can fluctuate.” Christ is also in charge of researching diseases that grow in Pennsylvania’s chipping potato crops. She notes that, “potatoes produced [in Pennsylvania] suffer more climate-related foliar diseases and more insect problems, so the cost of production is higher.” As a result, potato production in Pennsylvania has decreased marginally. But the state still remains the nation’s number one source of chipping potatoes. While Pennsylvania’s agriculture may have a few setbacks, farmers still manage to find loopholes and produce the most chipping potatoes in the nation. 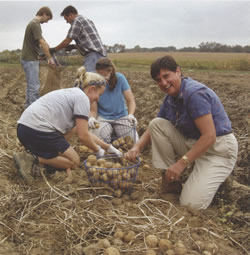 In addition to having successful growing conditions, Pennsylvania is also home to renowned scientific resources that study the harvesting of potatoes and the production of potato chips. The Pennsylvania State University has been advancing potato research and testing for years. Not only is the university known for its cross-breeding programs and genetic research of potatoes, but it is also recognized for researching methods of making potato chips as well. One of the techniques in which the researchers analyze the potatoes is by rating appearance and color; four potatoes are fried simultaneously, but for different lengths of time.

An additional cause for Pennsylvania’s success is potato chip production is the simple concept that potato chips are one of America’s favorite snacks—people love potato chips. More importantly, Pennsylvanians enjoy the chips that they can purchase locally. Greg Hake, owner of Hake’s Grocery in York County, PA says that “we’re in the potato chip area; we love our chips around here.” Perhaps this is because of the unique home-made feeling that a person gets when opening a bag of local chips. Another Pennsylvanian, grocery manager Terry Groff of Weaver Markets in Adamstown expresses the importance of local chips over nation-wide companies: “People in the rest of the U.S.—they have the Wise and the Lays—but they’ve never had a good chip.”