NEPA Photos@ancestry.com
A hotel collapsed in the wake of mine subsidence in Hazelton, PA in 1914.

In the seaport town of New London, CT, in 1998, 80 year old Wilhelmina Ciavaglia Dery could stand at her doorstep and smell the salty wisps of seawater from the nearby Atlantic shoreline. She had lived in her pleasant home on 28 East St. in the Fort Trumbull neighborhood of New London since she was born in 1918. The house had been part of her family for over 100 years. This year the New London Development Corp. asked Wilhelmina, or “Mina,” as she was called by friends, to vacate her home. The local government had invoked eminent domain, and they were going to take her house. She and a dozen or so of her neighbors, who were told to do the same, refused, and took their case to the Supreme Court, where they lost 4-5, losing their homes.

At this time, New London was suffering. The economy wasn’t well and the unemployment rate was nearly double that of the rest of Connecticut. The pharmaceutical company, Pfizer, offered the town of New London some relief by proposing to build a large research facility that would bring jobs to the suffering town. There was one problem with Pfizer’s plan: The land they wished to develop on was the location of Wilhelmina Dery’s neighborhood. The temptation of Pfizer’s offer was simply too great for the struggling town, and they conceded, enacting eminent domain for the benefit of the public.

Eminent domain is a government action protected by the last article of the fifth amendment of the constitution that allows the government to seize private property, with fair compensation to the owner, in order to benefit the public. Wilhelmina Dery’s case argued that the New London Development Corp. should be prohibited from enacting eminent domain for local economic benefit. Her case is far from being the first of its kind.

The case that forced the Supreme Court to define the principle of eminent domain actually occurred in the Pennsylvania anthracite coal region, near Scranton, Lackawanna County.

Coal mining was essential to the economic welfare of Scranton during the early 1900s.  The two most prominent types of coal used in the 1910s and 1920s were bituminous and anthracite.  Bituminous coal, found mostly in western Pennsylvania and surrounding states, polluted the air to the extent that it was banned in most large cities.  Anthracite coal is more environmentally friendly coal, and, in 1915, sold for four times as much as bituminous coal.  Pennsylvania was the only state to supply anthracite coal in the eastern United States, and most of the state’s deposits were near Scranton, PA. 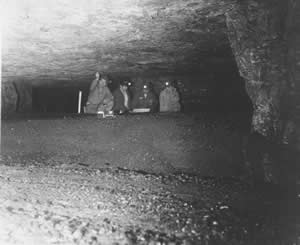 undergroundminer.com
Pillars of unmined coal (right of picture) support the surface layers of earth in towns and counties all around Pennsylvania...unless they become unsound.

However, along with the vast financial success of mining coal came the problem of subsidence.  Subsidence occurred when the coal underneath the surface was mined to the extent that there was not enough support for the land above it.  Subsequently, the land would cave-in and form massive crater-like holes capable of swallowing whole houses. 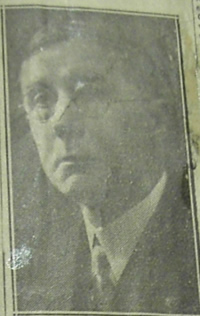 wurm-hastings.com
H.J. Mahon, the respondent in the case that set the legal precedent for the concept of eminent domain.

The end of these good relations occurred on August 28, 1909, about a week before local schools were scheduled to start. A schoolhouse in West Scranton was severely damaged by subsidence, collapsing into the ground.  Because of this catastrophe, the Surface Protective Association formed in order to protect the public against future subsidence problems.  There was no legal action against any of the coal companies, but Peoples Coal Company had done the most recent mining.  On February 3, 1919, without warning, a major subsidence occurred in Hyde Park, Scranton. “Whole rows of buildings in the heart of Hyde Park collapsed; sidewalks were upended; sewer, gas, and water lines burst,” according to Professor Fischel.  Peoples Coal Company, again, was found to be the culprit and in violation of a court injunction.  According to Professor Fischel, “the Peoples Coal Company was responsible for most of the major subsidence damage. It was truly a rogue company.  Not only did Peoples violate the informal agreements; it also violated the law by taking coal that was specifically reserved for support.”

Due in large part to the actions of Peoples Coal Company, the Kohler Act was passed on May 27, 1921.  The act prohibited the mining of anthracite coal under any structure used for human habitation, with the exception of the structures owned by the coal company doing the mining.

Coal mines existing beneath structures used for human habitation were to be ceased by the government. The government proposed to enact a nuisance exception. A nuisance exception is the government’s taking of a private property without compensation to the past owner, unlike eminent domain, which offered fair compensation. Dartmouth College Professor of Economics, William A. Fishcel, stated in his work, “if a land use is itself noxious, dangerous, or causes a public nuisance, the legislature is free to regulate its use without compensation, even though the police power may cause great loss to the property owner.” 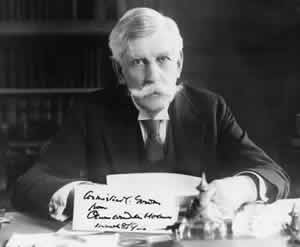 Health Sciences Library, U of Virginia
Justice Oliver Wendell Holmes wrote for the majority in the case of Pennsylvania Coal v Mahon, establishing the principle that private entities must be compensated when government takes their land.

The battle between government and the coal industries was taken to the Supreme Court. In Pennsylvania Coal Company v. Mahon, the legality of the Kohler Act was questioned, as well as the government’s proposal to enact a nuisance exception. The court held that the Kohler Act was a “legitimate exercise of police power.” But, Supreme Court Justice Oliver Wendell Holmes, Jr. argued “one fact for consideration in determining such limits is the extent of the diminution. When it reaches a certain magnitude, in most if not in all cases there must be an exercise of eminent domain and compensation to sustain the act.” The government must compensate the Pennsylvania Coal Companies for any seized mines.

Justice Holmes’ statement is the origin of what is known in law today as “diminution of value,” which is used by lawyers as a benchmark in determining whether government enacts eminent domain or nuisance exception when seizing land.  Justice Holmes felt that the Kohler Act caused a diminution of value of the right to mine coal, therefore the coal companies should be compensated for the seizing of their property.  In Thomas J. Micelli’s work titled Compensation for Regulatory Takings: An Economic Analysis with Applications, he had to following to say regarding Justice Holmes: “Justice Holmes’ ruling in Pennsylvania Coal marked a watershed in takings law because, prior to this case, takings were usually limited to physical acquisitions of property by the government; most efforts to obtain compensation for ‘mere regulations’ failed.”

Eminent domain continues to be a heavily debated topic in American legislation. Due to Justice Holmes decision, institutions are now compensated by the government through seizing via eminent domain. It has provided property rights for institutions that are still felt today.

In 2006, New London’s Wilhelmina Dery passed away before her home could be taken to construct a research facility by Pfizer. Mrs. Dery’s family was compensated for the property. However, less than five years after the research institution was established, Pfizer announced it would be shutting down the facility. It resulted in massive job losses in New London and saved Pfizer an expected 4 billion dollars. Many hope that the tragic outcome of Wilhelmina Dery’s case will someday have the same legislative influence as Supreme Court Justice Oliver Wendell Holmes, Jr.’s decision for the Pennsylvania Coal Mining Case.