The Lightning Rod: A Not-So-Shocking Invention 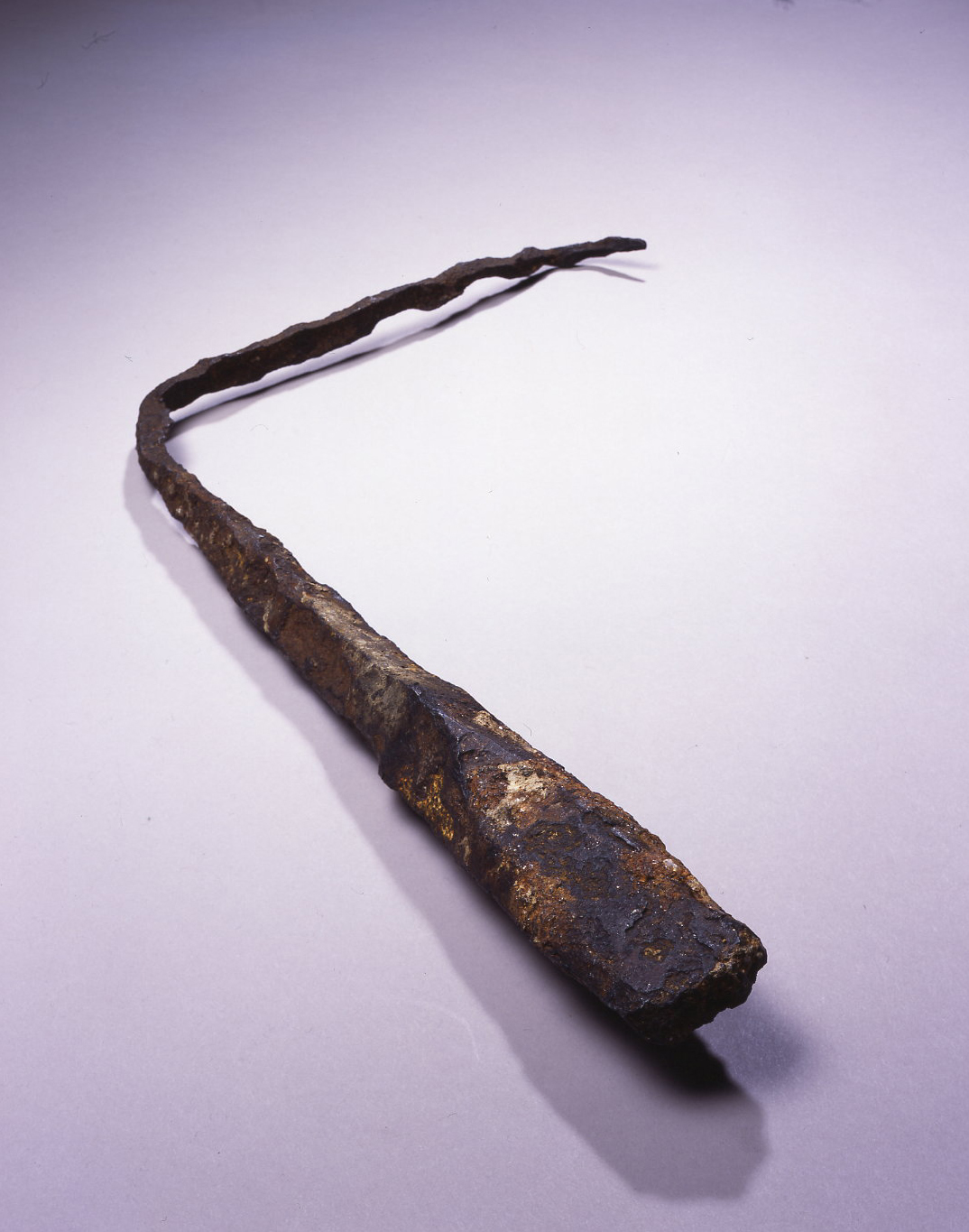 Lightning is a force to be reckoned with. It can strike at one third the speed of light and at temperatures exceeding 50,000 degrees Fahrenheit. We have all seen the beautiful flashes of light and heard roaring shockwaves of thunder, but most people do not have personal experience with the damage that lightning can cause to buildings, ships, and many other structures, let alone the injuries and deaths it can cause to people. For that, we can thank Benjamin Franklin’s ingenious invention—the lightning rod.

For centuries, lightning was a mystery, often believed to be an act of God. Many philosophers and scientists of the mid-eighteenth century suspected, though they could not prove, that lightning was electricity. Now we know that lightning is caused when excess electrical charge builds up in clouds. When the charge becomes great enough, it can be released, jumping from clouds to the ground in a sudden bolt. When experiments were preformed attempting to “draw sparks” from lightning, it was finally proven that thunderclouds are electrified and lightning is an electrical discharge.

The first experiment was performed under instructions from scientist Thomas-François Dalibard, who translated some of Franklin’s books from English into French. On May 10, 1752, at the village of Marly-la-Ville near Paris, they set up a tall iron rod insulated from the ground with wine bottles and succeeded in drawing sparks from lightning.

In the famous kite experiment in Philadelphia, Benjamin Franklin succeeded in drawing sparks from thunderclouds. Franklin’s experiment is thought to have actually happened on June 15, 1752 – after the one in Marly-la-Ville, but before he received word of its success. Philip Dray discusses why Franklin’s experiment is controversial in his book Stealing God’s Thunder: Benjamin Franklin’s Lightning Rod and the Invention of America. He states that Franklin was very secretive about the experiments plan and execution, and the only eyewitness was his son William, who never gave any statement about it. As a result, there is no concrete evidence that the experiment actually took place; however, it is generally accepted as true. The mystery that surrounds the kite experiment makes it one of America’s most beloved tales. 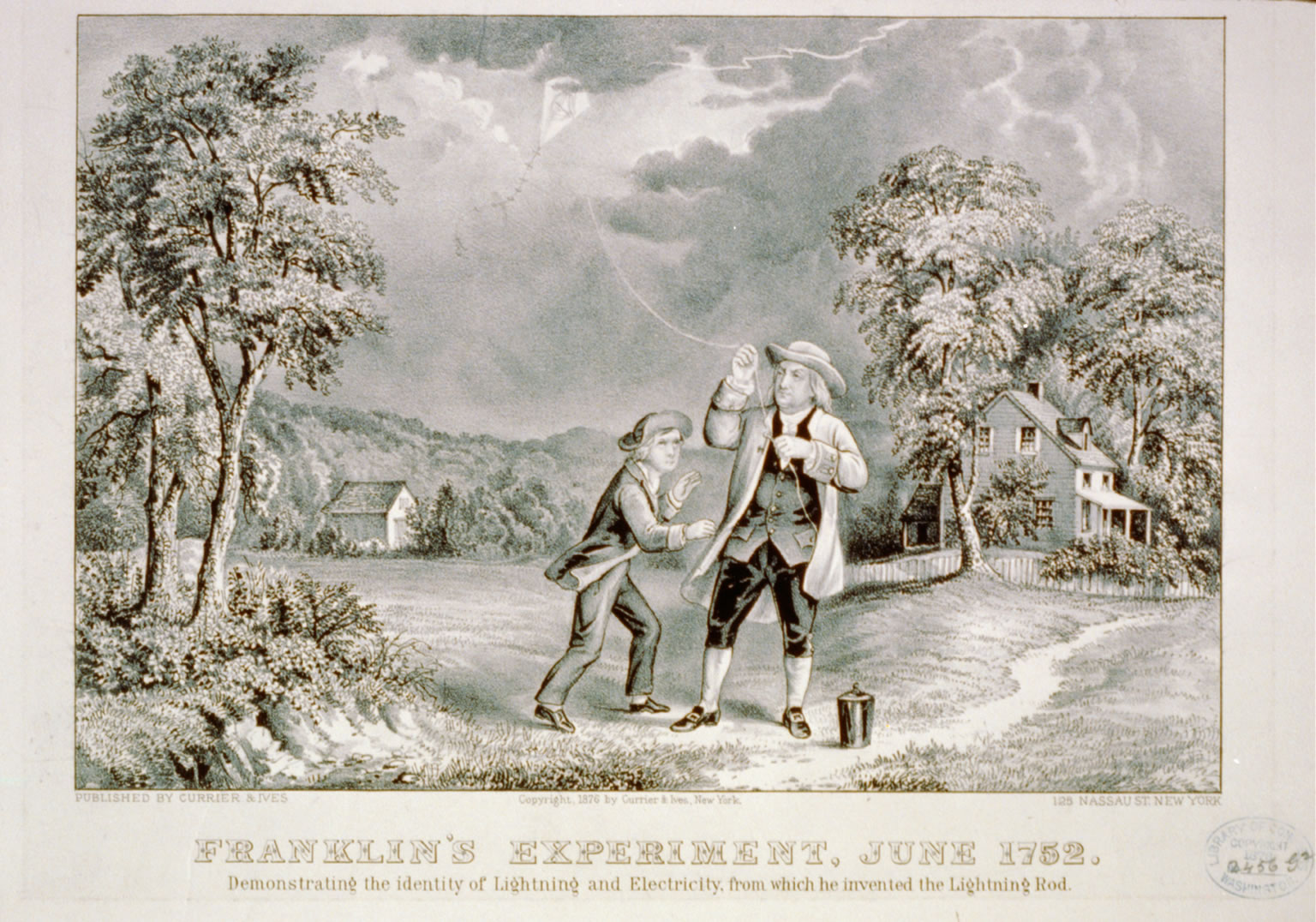 Currier and Ives, Library of Congress
American legend has it that Franklin discovered electricity with the famous kite experiment. This version is portrayed by the 19th Century's best-known lithographers, Currier and Ives.

In Dray’s description of the kite experiment, “Franklin carried with him a kite he had made of silk and cedar. To the top of the upright stick he had attached a sharp pointed wire that rose a foot or more above the wood. The twine leading down from the kite was attached to a silk ribbon, and on the silk ribbon dangled a key. It was important that Franklin and William stand indoors because the silk ribbon must remain dry…” The ribbon needed to be dry to act as an electrical insulator. Without the silk insulating the key from the ground, any electrical current would have passed straight into the ground, rather than gathering in the key. Franklin reported seeing the individual strands of hemp standing on end while waiting, and brought his knuckle close to the key, receiving a mild shock. Once rain began and wet the string, sparks started to “steam off the key to Franklin’s hand.”

With the proof that lightning was indeed electricity, and knowing that an iron rod could be used to attract it, Franklin erected the first lightning rod on the roof of his own house to continue tests. In his book Experiments and Observations on Electricity, he states that “an iron rod being placed on the outside of a building, from the highest part continued down into the moist earth… will receive the lightning at its upper end, attracting it so as to prevent its striking any other part; and, affording it a good conveyance into the earth, will prevent its damaging any part of the building.” This book, published in London in 1751, was translated and distributed across Europe, having a huge impact on the world of science. In fall of 1752, he published a passage in the 1753 Poor Richard’s Almanack detailing how one could protect their home or vessel from lightning:

How to secure Houses, &c. from LIGHTNING.
It has pleased God in his Goodness to Mankind, at length to discover to them the Means of securing their Habitations and other Buildings from Mischief by Thunder and Lightning. The Method is this: Provide a small Iron Rod (it may be made of the Rod-iron used by the Nailers) but of such a Length, that one End being three or four Feet in the moist Ground, the other may be six or eight Feet above the highest Part of the Building. To the upper End of the Rod fasten about a Foot of Brass Wire, the Size of a common Knitting-needle, sharpened to a fine Point; the Rod may be secured to the House by a few small Staples. If the House or Barn be long, there may be a Rod and Point at each End, and a middling Wire along the Ridge from one to the other. A House thus furnished will not be damaged by Lightning, it being attracted by the Points, and passing thro the Metal into the Ground without hurting any Thing. Vessels also, having a sharp pointed Rod fix’d on the Top of their Masts, with a Wire from the Foot of the Rod reaching down, round one of the Shrouds, to the Water, will not be hurt by Lightning.

“A modern Prometheus,” the world-renowned German philosopher Immanuel Kant named Benjamin Franklin, as recorded in historian H.W. Brands’ book The First American: The Life and Times of Benjamin Franklin. In Greek mythology, Prometheus was known as an intelligent, humanitarian God who brought fire from the heavens to earth for the benefit of mankind, which certainly mirrors Franklin’s contributions in making “heaven’s fire” safe. 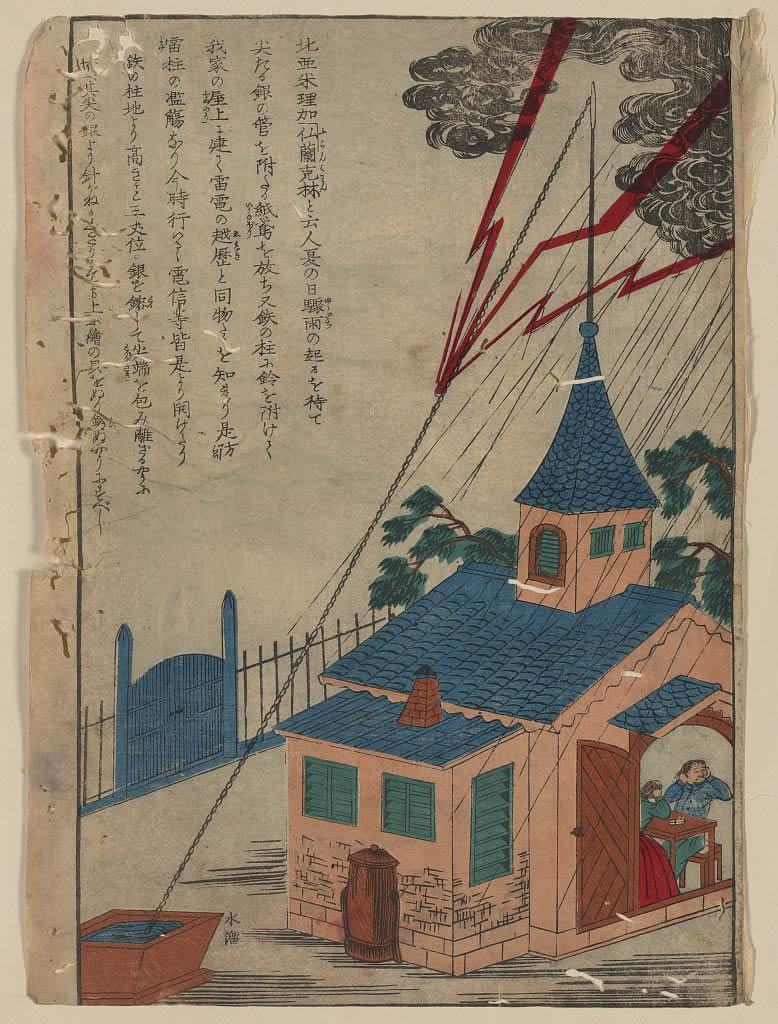 Library of Congress
The kite experiment and the lightning rod that came from it made Franklin famous the world over. This Japanese version of the story is called "Furankurin to kaminari no zu."

Franklin never patented his invention. Dray tells that Franklin “believed that products of the human imagination belonged to no one person, and should be shared by all.” Although Franklin refrained from patenting for moral reasons, acquiring a patent in Colonial America was not easy. Because there was no standard, national patenting process, one would have to obtain a separate patent from each individual colony.

While it is widely accepted today that lightning rods effectively reduce damage to structures, there is some debate as to exactly how they should work and what shape is best. Franklin believed that the best shape was a sharp, pointed rod. He seemed to believe that while a lightning rod does act as a channel for lightning, it could also help to prevent a lightning strike by pulling some of the charge away from clouds and to the ground. In his own words, “the pointed rod either prevents a stroke from the cloud, or, if a stroke is made, conducts it to the earth with safety to the building.”

As experiments continued and developed, it is now believed that a pointed rod does not prevent a strike. C. B. Moore, G. D. Aulich, and William Rison concluded in the Journal of Applied Meteorology that “no credible evidence has ever been presented demonstrating that lightning rods discharge thunderclouds or that they prevent the initiation of strikes within thunderclouds.” It is generally accepted that a pointed rod actually attracts lightning by causing an increased charge in the surrounding air. In this aspect, Franklin’s rod was successful in creating a contact point for lightning to strike, as well as a safe path for it to reach the ground.

National Park Service
Franklin put up a lightning rod on his own house at 141 High Street (now Market Street) in hopes of encouraging others to do likewise. It worked.

Debate about what shape of rod is most efficient continues today. Since a lightning rod is used solely as a lightning receptor, studies have been conducted to test if a round-tipped rod would be better than a pointed tip. Charles B. Moore of the Langmuir Laboratory for Atmospheric Research at the New Mexico Institute of Mining and Technology conducted field studies to compare the effectiveness of pointed and round-tipped rods. Pointed and rounded rods were placed in a field environment, where various sizes of both types were “competing” for lightning strikes. The round rods were struck thirteen times, while the pointed rods received no strikes. This was consistent with laboratory test results, and the group working on the project concluded that for the purpose of attracting lightning strikes, a rounded rod was a better choice. The debate still continues however, as some people still believe a pointed rod is best.

Since Franklin’s invention, people have been trying to improve the lightning rod. Nikola Tesla, a famous inventor and huge contributor in electrical engineering, submitted patent number 1266175 in 1916 for a lightning rod. In this patent he detailed an oddly shaped rod consisting of many metal bars radiating outward from a center pole. He claimed that the shape was meant to effectively intercept lightning strikes without causing the surrounding area to become charged, which could attract more lightning, causing danger. 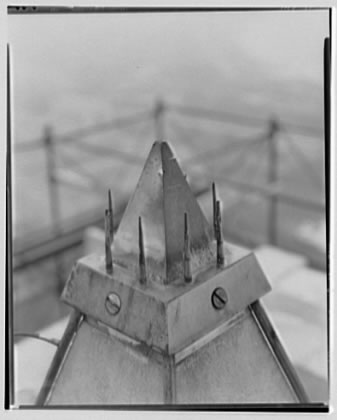 Theodor Horydczak, Library of Congress
The Washington Monument is pictured here with a Franklin-style lightning rod.

While research continues, there’s no debate about the importance and necessity of lightning protection. The National Lightning Safety Institute estimates that “annually in the USA lightning causes more than 26,000 fires with damage to property in excess of $5-6 billion.” It is impossible to imagine what those numbers would be without lightning protection and prevention systems. While better lightning prevention systems continue to develop, their roots can be traced to Benjamin Franklin and his invention.