Longwood Gardens: From Preservation to Paradise 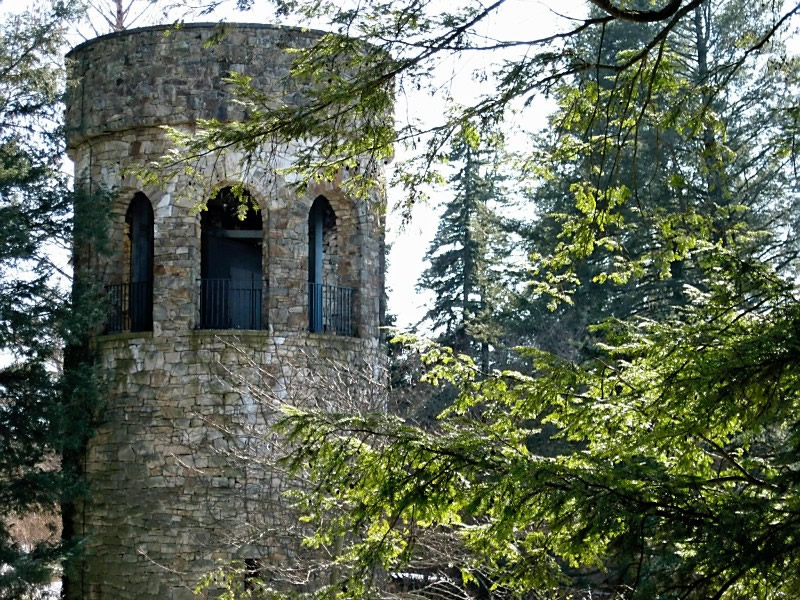 Shopping centers, traffic lights, a heavily congested four-lane highway…and 1,050 acres of botanical gardens? Longwood Gardens provides this unique juxtaposition for U.S. Route 1 travelers as they maneuver their way through this particularly crowded area of Chester County. Longwood Gardens is an incredible collection of local and exotic plants, flowers, trees, and more. With a rich history dating back to its settlement by the Lenni Lenape American Indian Tribe, the hundreds of acres now comprising Longwood Gardens provide a visual and educational experience like no other.

Drawing inspiration from horticultural expositions all over the world, as well as from Italian and French architecture, Longwood Gardens is a pastiche of exotic gardens, elaborate fountains, and extravagant lighting displays. Visitors are invited to peruse Longwood’s 20 outdoor gardens, 4.5-acre indoor conservatory, illuminated fountains, and array of water gardens. It operates throughout the year as a private non-profit foundation, drawing funds from philanthropic endowments as well as from admissions, gift shop sales, programming and restaurant revenue. In fact, the Longwood Foundation was given government approval to operate Longwood Gardens “for the sole use of the public for purposes of exhibition, instruction, education, and enjoyment.” 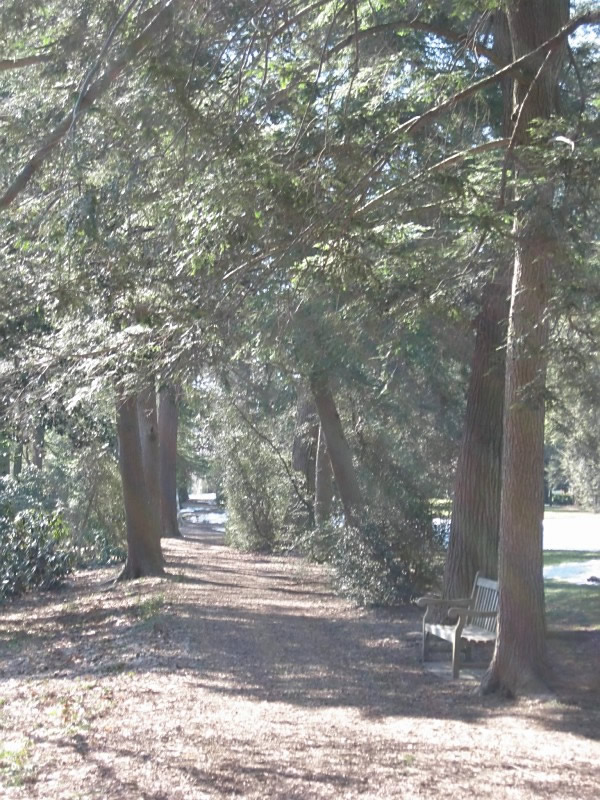 Angela Pietschmann
Trees like these are the very root of the Longwood Gardens.

In 1700, a Quaker family named Peirce purchased the land that is now Longwood Gardens and established it as a working farm and homestead. Prior to the Peirce family’s acquisition of the land, the Lenni Lenape tribe had inhabited the territory. According to the Longwood Gardens website, the Native Americans “hunted, fished, and farmed the productive wilderness.” However, in 1798 Joshua and Samuel Peirce began planting an arboretum with an impressive collection of evergreen trees, which was recognized as one of the finest in the nation by 1850. They also began acquiring native and exotic plants through exchanges with other collectors, and over time the collection increased and was opened to the public. The grounds were known as “Peirce’s Park” and many social events were hosted there over the years.

After the death of George Peirce, who had maintained the property, the collection of trees was under contract to be cut down for lumber in 1906. Fortunately, Pierre du Pont (grandson of the founder of the DuPont Chemical Company, Eleuthère Irénée du Pont) was an industrialist, farmer, designer, collector, and conservationist who contacted the parties involved. He purchased not only the lumber contract, but also the entire Peirce property. The conservationist wrote to a friend that his reason for purchasing the contract and land was “to save the collection of old trees…many of them of extraordinary growth and arresting appearance.” Preserving the land and its plant life was du Pont’s top priority, prompting him to write a 174-page instruction manual for his workers to follow when caring for the grounds.

Du Pont’s first addition to the property was the Flower Garden Walk, a 600-foot-long brick path through a variety of floral gardens, added in 1907. He described the Flower Garden Walk as “the old-fashioned plan of straight walks and box borders at the edge of the flower beds.” Additions to the gardens came quickly after the Flower Garden Walk, and the incredible mix of styles and designs found throughout Longwood Gardens is a result of du Pont’s vast array of influences. What’s more, rather than following a coordinated and predetermined plan, he built each element making up the gardens today piece by piece. 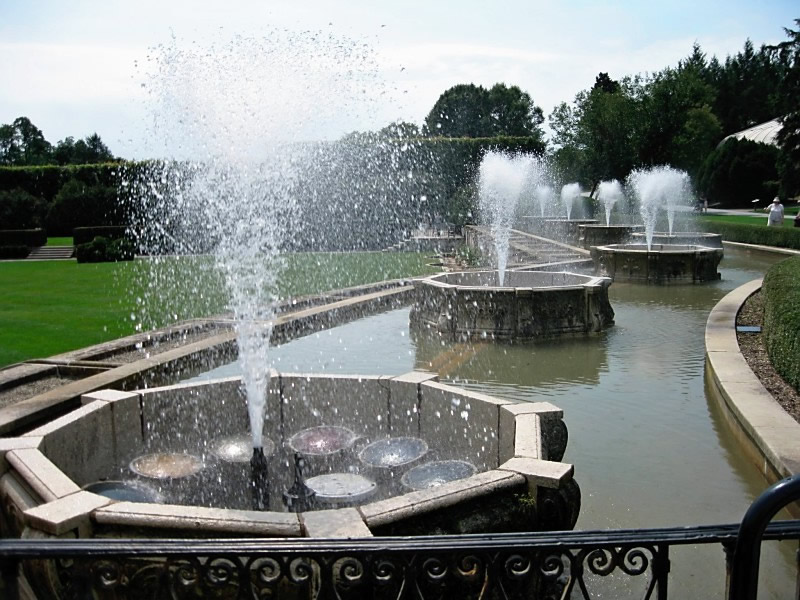 Furthermore, Du Pont’s fascination with fountains is evidenced all throughout Longwood. He noted, “As a child I was always delighted to behold flowing water and confess to still feel a thrill at the sight of clear water running freely from a faucet.” Drawing inspiration from Chicago’s 1893 World Colombian Exposition, du Pont began work on the five-acre Main Fountain Garden in 1929. This fountain garden can be seen from the Conservatory’s deck, and visitors are invited to walk along the paths and through the grass surrounding the fountains. The water is sprayed up to 130 feet into the air, with 10,000 gallons of water circulating through the pumps each minute. The Main Fountain Garden is the site of Longwood’s yearly Festival of the Fountains, an elaborate display of the fountains illuminated with red, blue, green, yellow and white lights, set to music.

Additionally, though many elements of Longwood’s landscape do not suggest a specific cultural influence, the Italian Water Garden draws heavily from du Pont’s admiration for the Villa Gamberaia near Florence, Italy. Construction of these fountains began in 1925 and was completed two years later. The Italian Water Garden contains 600 circulating jets that pump 4,500 gallons of water per minute through 18 pools. With renovations completed in 1992, the fountains are operated from April to October each year.

Perhaps one of du Pont’s greatest contributions to the property was the Conservatory, opening in 1921 as Longwood’s largest construction project. The Conservatory is a 4.5-acre greenhouse housing 20 indoor gardens and 5,500 types of plants. Open year round, the Conservatory attracts visitors with changing seasonal displays, including the popular orchid show held in March. Furthermore, the Conservatory’s Exhibition Hall, with its original sunken marble floors, has been used over the years for special exhibits and events. The floors are typically filled with water to reflect the foliage, but when events and exhibits take place in the Exhibition Hall, the floors are drained. The Conservatory also includes a 3,700 square foot Indoor Children’s Garden, filled with fountain displays, paths, and a variety of plant life as part of Longwood’s educational efforts. 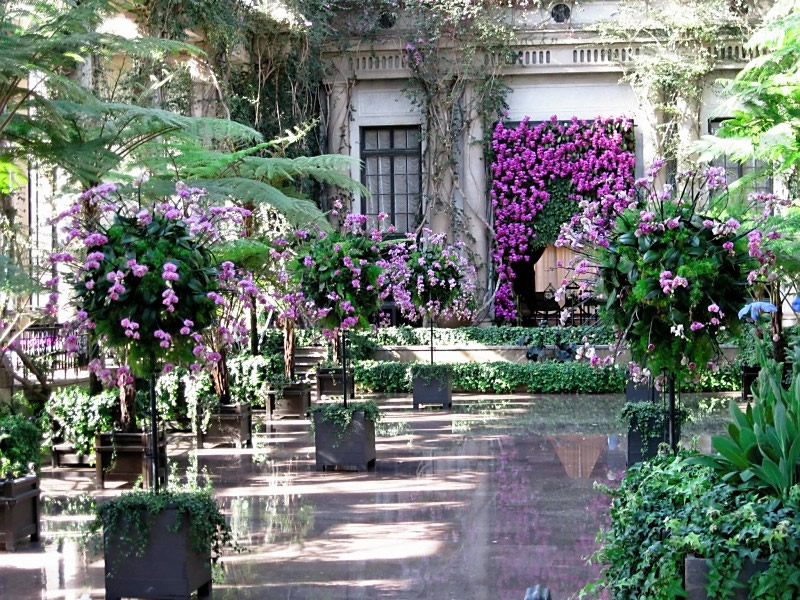 Angela Pietschmann
The play of light and shadow are woven around and through the gorgeous blooms inside the Longwood Conservatory.

In addition to the Children’s Garden, Longwood offers a series of school and youth programs to inspire and educate students. Programs are available to students at all levels, and teachers are invited to participate in classes to earn Act 48 credits, a Pennsylvania Department of Education act that requires “persons holding Pennsylvania professional educator certification to complete continuing education requirements every five years in order to maintain their certificates as active.” In the past 50 years 1,000 students have participated in Longwood’s professional education programs. The organization also offers a two-year Professional Gardener Program, designed to educate and prepare students for horticultural professions, in addition to three different internships for qualified students. Outside of the gardens, the Longwood Graduate Program is offered at the University of Delaware for students already experienced in horticulture.

Longwood’s educational efforts go beyond just targeting students. They offer daily visitor programs to all guests interested in learning more about the gardens or horticulture in general. Several workshops and courses are taught through their continuing education department for anyone interested in gardening, professionally or recreationally. For the past thirty years, up to 5,000 students have attended continuing education programs at Longwood each year. Additionally, visitors looking for inspiration for their own gardens can take a look at Longwood’s Idea Garden. The Idea Garden is designed to show gardeners how to combine local plant varieties for different purposes such as pest management, eco-gardening, and vegetable and fruit gardening. 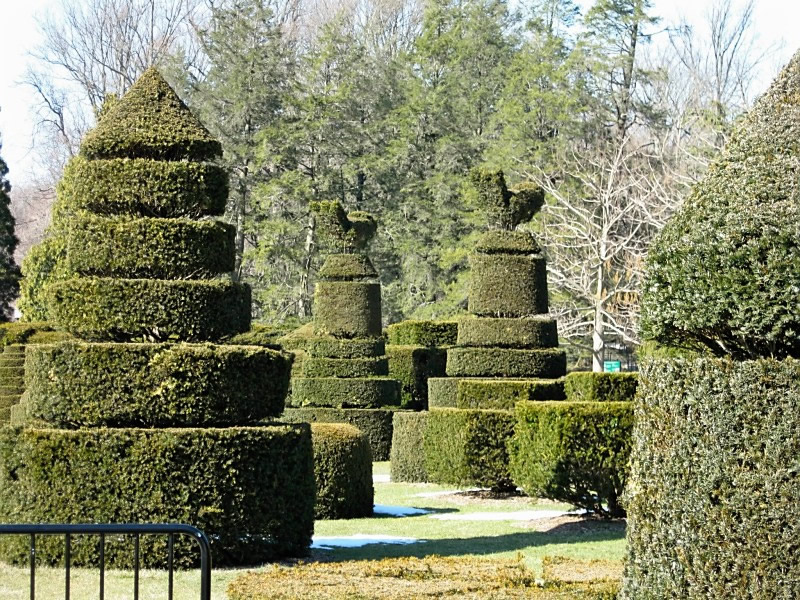 Angela Pietschmann
Topiary combines the arts of humanity and the beauty of nature.

Moreover, Longwood’s commitments to education and preservation efforts have not gone unnoticed. In 2008, the organization was honored by the Garden Writers Association (GWA) of North America with the Wilfred J. Jung Distinguished Service Award. This prestigious award recognizes a company that has “promoted gardening in North America, helped expand the profession of garden communications, and supported the overall objectives of the GWA and its membership.” But to There du Pont, president of the Longwood Foundation, that isn’t what makes Longwood stand out among similar gardens. In his opinion,

Longwood offers a unique blend of horticulture, education, and arts and entertainment. They do it on 1,000 acres, only about 25% of which are open to the public, and work hard to maintain the historical accuracy of the property. There are probably only a handful of gardens in the country that offer so much breadth with the level of quality of horticulture.

The historical accuracy There du Pont mentions is taken seriously at Longwood. Pierre du Pont’s vision for Longwood Gardens is stored at the Hagley Museum and Library, a “nonprofit organization that collects, preserves and interprets the unfolding history of American enterprise.” A full-time historian ensures that du Pont’s vision is maintained throughout the grounds. There du Pont also assures that “everyone from the staff to the board is keenly aware of the impact and importance of Pierre’s vision on the Gardens today, and make most if not all decisions with him in mind.” Pierre du Pont even ensured that his work at Longwood would be maintained after his passing by establishing Longwood, Inc. in 1914. The goal of Longwood, Inc. is to continue the operation of the property as “the living legacy of Pierre S. du Pont, inspiring people through excellence in garden design, horticulture, education, and the arts.” Longwood Inc. is overseen by the Longwood Foundation, which is comprised of a board of directors who manage charitable contributions and fund major projects. 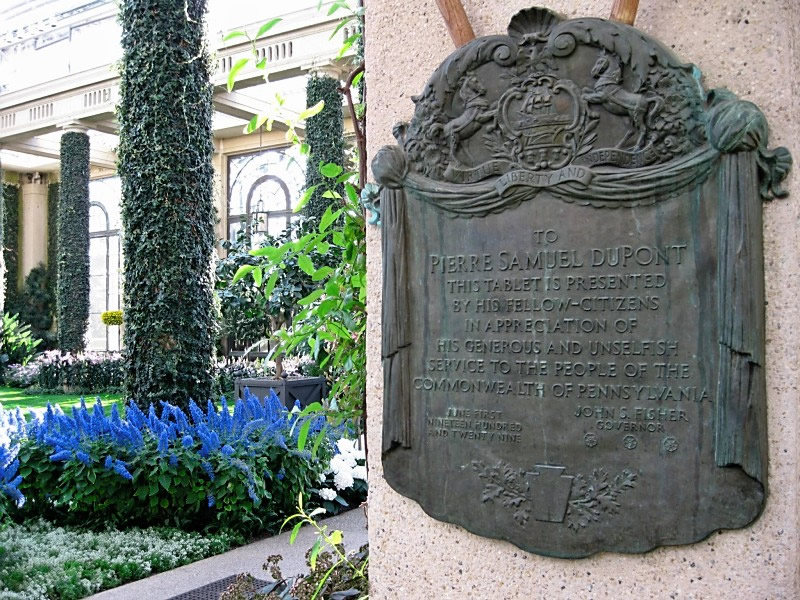 Angela Pietschmann
The Commonwealth of Pennsylvania paid tribute to the work of Pierre Samuel DuPont with this plaque at Longwood Gardens.

Despite the passing of du Pont in 1954, Longwood continues to add exhibits and entertain visitors with a variety of new events. According to There du Pont, “the holiday lights are easily the most popular event…on a good weekend night in December they will have over 10,000 visitors on the site.” These attendance numbers are impressive, yet not surprising when one considers the amount of work put into the displays. The process of wrapping 91 enormous trees in strings of LED light bulbs begins in August and is completed by Thanksgiving. Robin Lane Fox, gardening correspondent for London’s Financial Times, claims he has “no hesitation in naming the best Christmas display in the world. It is on view at Longwood Gardens.” In a 1998 article, he paints the picture of Longwood’s holiday display: “Everywhere, lights made up for the absence of flowers and turned the darkening landscape into a Christmas heaven. Orderly crowds walked through in due appreciation, accompanied by children to whom the sight really was heaven.”

Yet, while the holiday lights have become a staple of Longwood Gardens and bring in crowds yearly, recent additions to the gardens are attracting attention as well. In 2008, after four months of construction, Longwood invited visitors to explore “Nature’s Castles: The Treehouse Reimagined.” The exhibit consists of three treehouses designed with lookouts, platforms, and walkways. One particular treehouse, the Canopy Cathedral, reaches two stories high and has an attached 118 square-foot balcony. All of the houses are anchored to pipes in the ground to avoid damaging the trees and were built primarily with salvaged material in accordance with Longwood’s sustainability efforts.

Built on a foundation of horticultural preservation and public exhibition, Longwood Gardens has become a premiere North American gardening showcase. Pierre du Pont’s vision for the gardens continues to be executed and expanded today throughout the property, and his dedication to education has helped promote learning opportunities for students of all ages and backgrounds. In his words, “the fundamental aim of the place is to do everything that is attempted in a first class way.” His hopes for Longwood are continually achieved, delighting a yearly audience of 850,000.

More about Longwood Gardens, its schedule, and its plants can be found at its website.

Please check out the small gallery of pictures below the sources. 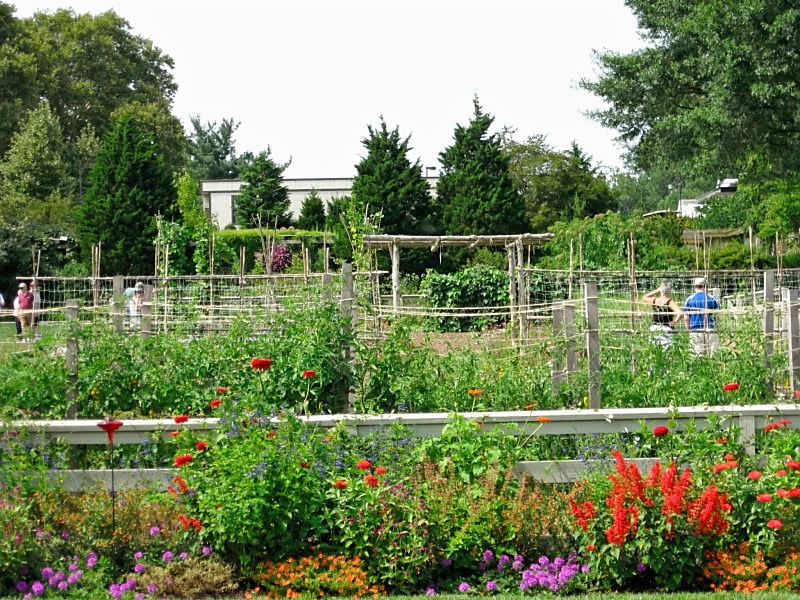 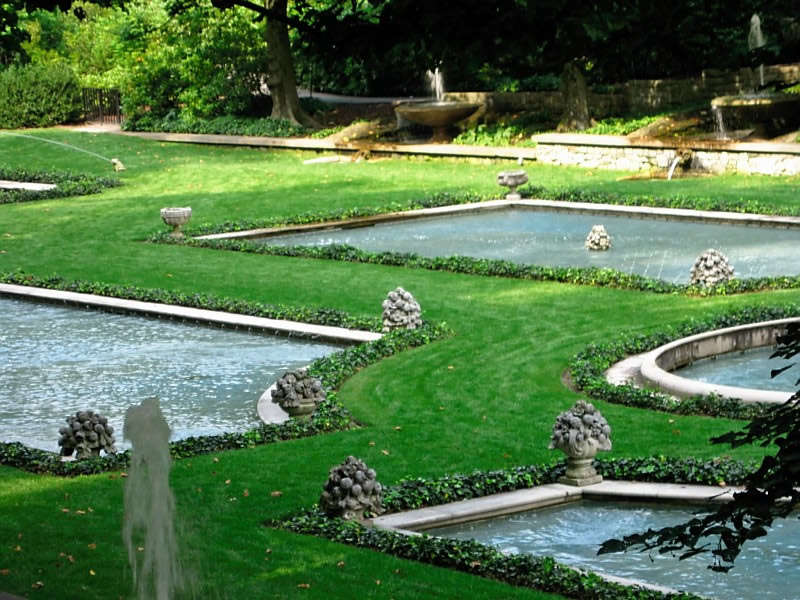 Angela Pietschmann
Side view of the Italian Water Garden at Longwood. 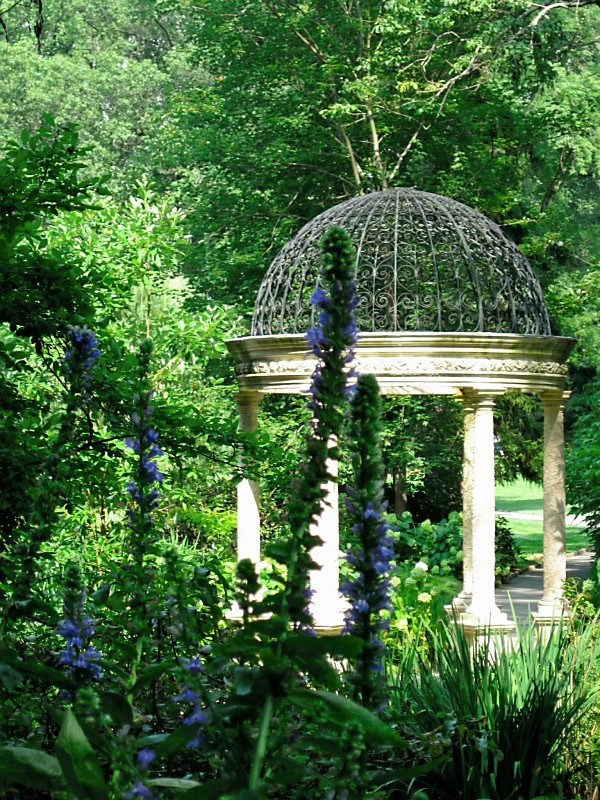 Angela Pietschmann
No park is complete without a traditional gazebo.
County:
Chester
Spring 2010