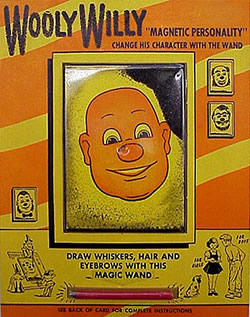 The town of Smethport, Pennsylvania lies in McKean County, near the New York border. The town may seem anonymous merely for its size—it covers just 1.7 square miles and is home to only 2,000 residents—but all you need to do to discover Smethport’s rich local history is take a walk down Main Street.

Then you’ll pass a line of historic buildings. The now-defunct Shawmut Railroad depot stands empty on Water Street, the last of four railroad depots the town had. One of the town's once vibrant glass factories remains, home to a peppermill manufacturer. Standing among the Lutheran, Methodist, and Baptist churches is St. Elizabeth’s Catholic Church, rebuilt after a 1905 fire.

At the corner of a row of stores, you’ll see the building that, until 2005, housed America’s first ever Christmas store. It opened in Smethport in 1932 under the management of local pharmacist and businessman Leonard Johnson, and remained a local icon until the owners retired and couldn’t find anyone to buy it.

On this walk, you may not notice a small auto parts store, tucked away on Fulton Street one half block off Main. But if you ask a local, you’ll find out that this building wasn’t always an auto parts store. It used to be a toy factory, and it was the birthplace of Smethport’s most beloved citizen—an international icon whose fiftieth birthday Smethport celebrated in 2005: Wooly Willy. 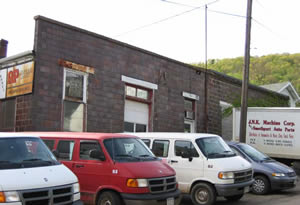 Wooly Willy is no ordinary man—he is one of the most popular toys in American history. Willy can be found in toy-bins worldwide: a bald, grinning face with an oval nose, onto which children can “draw” hairy eyebrows, a bushy beard, or sickening ear hair, using magnet shavings and a magnetic “wand.” Sold in the 1950s for twenty-nine cents, Wooly Willy can still be found in toy stores worldwide for about two dollars.

The original Wooly Willy was created by James Herzog with the help of his brother Donald in their father’s toy production company in Smethport, Pennsylvania. Though toy retailers initially laughed at the idea, Wooly Willy soon spread beyond the boundaries of Smethport and, eventually, the U.S.

It all began in 1931, when Ralph Herzog bought the building at 304 Fulton Street in Smethport, named it Smethport Specialty Company, and began manufacturing toys. The toy industry had been in significant decline since the start of the Great Depression in 1929, and dwindled to a near standstill at the start of World War II in 1939. Herzog’s toys were no exception, and when his materials were requested for the war effort, toy production at Smethport Specialty was put on hold. The company, under the new name R.W. Herzog, started manufacturing insulators for proximity fuses for bombs. These fuses allowed operators to control the exact moment of explosion, and were considered one of the war’s most important weapons. The small company began to expand.

Once the war was over, Ralph Herzog slowly returned to toy production, this time including his sons Donald and James. Its name restored to Smethport Specialty, the factory resumed production of the Flicker Top, one of the only toys that had remained popular during the Depression. It also continued to sell the themed three-piece magnet sets that had begun the business in 1922.

In an article written for American Profile, James Herzog explained how these magnets led him to the idea of Wooly Willy: “the ends of the magnet had to be run across a grinding wheel to make them level and it created a lot of dust. I came in and ground the magnets one day and all of a sudden it came to me. I put a pile of dust on a piece of cardboard and used magnets to play around with it.” Herzog soon realized that the pieces could be used for magnetic drawings, and the concept for Wooly Willy was born in 1955.

Around the same time, the U.S. Army began making 3-D maps by vacuum-forming heated plastic. Donald Herzog suggested to his brother that this process could be used to contain the magnetic pieces in a formed plastic case. Once they constructed the package, the Herzog brothers teamed up with local artist Leonard Mackowski, who designed Willy’s face and the display card on which to put it. Mackowski would often hide his name in the art on the back of the package. Using a wand with a small magnetic tip at the end, a user could move the magnetite whisker material around Wooly Willy, giving him anything from bangs to beards to bowties. Thumbnail pictures on the display card gave users creative ideas for different “magnetic personalities.” At this point, the two brothers had a finished product—simple, portable, and inexpensively produced.

With confidence in the ingenuity and replay value of their toy, the Herzog brothers began to pitch to toy retailers. However, others didn’t seem to see what the Herzogs saw in their creation. For several months, Wooly Willy was turned down by everyone. One buyer called it the worst toy he had ever seen. When Herzog approached a buyer at the G.C Murphy Headquarters in McKeesport, Pennsylvania, the buyer set out to prove to Herzog once and for all that his toy would not sell. He ordered six dozen Wooly Willys for the G.C. Murphy chain toy shop in Indianapolis, insisting “I’ll still have all of them a year from now.” “Two days later,” Herzog recounts, “he called and ordered a thousand dozen. The rest is history.” 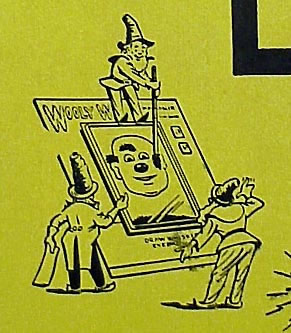 Within ten years, the Smethport Specialty Company had grown tremendously. In 1965 it moved west, just outside of Smethport, where it remains today after several expansions. New versions of Willy were released from this new factory—even some with colored hair. And other magnetic toys followed: the Magnetic Dozer, in which the wand controlled a bulldozer and cleared dirt from roads, and Magnetic Doodle Balls, which were moved around on a grid to draw clear pictures. According to Smethport Historical Society, the first refrigerator magnets were invented at Smethport Specialty. They came in an alphabet set. Buyers were initially confused with this idea as well, asking “who would want to cover their refrigerator door?”

The toy that started it all, however, always remained the best-selling for Smethport Specialty. Wooly Willy soon reached international status. Patch Products of Beloit, Wisconsin purchased the manufacturing assets of Smethport Specialty in 2008 and moved the sales office to the Badger State; full operations, including Wooly Willy, remained in Smethport. Wooly Willy is one of 200 magnetic games and puzzles manufactured by Patch Products today. Since 1955, over 75 million Wooly Willys have been sold.

“It’s one of those ideas that’s small, but in the end it’s big,” said James Herzog, now in his eighties. “What’s unusual is that the packaging became the product, so it made manufacturing cheap.” Such ingenuity in manufacturing allowed Herzog and his successors to keep the selling price low and to keep the manufacturing in Smethport.

American Profile states that although the toy’s packaging design looks very similar to the handmade version in 1955, its manufacturing process is now fully automated. An offset press prints 3,000 cardboard sheets an hour, and then adds a glossy, smudge-proof coating. Other machines assemble the plastic packages, which are packed for shipping to hundreds of stores in the United States, Canada and the United Kingdom. 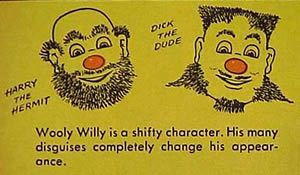 James R. Herzog Collection
Planet Smethport Project
Wooly Willy's versatility was limited only by the imagination of the child playing with it.

One year after Wooly Willy’s 50th anniversary celebration in 2005, VH1 aired the TV series I Love Toys. Five sixty-minute episodes detailed the top 100 toys ever made—Wooly Willy came in at number eighty-one. It was also featured in the Toy Industry Association’s “Century of Toys” list, among a select number of other legendary toys, and among many other toys whose original ideas were also largely rejected. Wooly Willy is one of the three most famous toys in the United States that was invented in Pennsylvania, along with the Slinky and Monopoly, to hit American toy shelves in the twentieth century.

Today, there are many other magnetic hairstyling games: Dapper Dan, Hair-do Harriet, Betty Brunette, Doodle Bug and Hair Bear. But Wooly Willy remains the classic and most recognizable. Wooly Willy can be played in his original design online, the magnetic wand replaced with a mouse pointer. iPhone, iPad and iPod Touch users can download a Wooly Willy application and use their own pictures as backdrops.

Whichever medium they’re on, these updates only recreate the simple appeal of the original Wooly Willy—that kids don’t need to be artists to get creative with it. “And what you create always looks humorous and entertaining.” says James Herzog. “Without that, it probably wouldn’t have been a great toy. It’s something anyone can play with and get a laugh for themselves and others.”

And the town of Smethport still gathers every June for National Wooly Willy Wonderdaze, to celebrate the international celebrity that everyone’s stuck on.