Westinghouse Nuclear
Westinghouse has brought innovations in technology and electricity for decades.

On March 27, 1979, the nuclear power industry in America was thriving. The next day, an accident in Unit 2 of the Three Mile Island Nuclear Generating Station hamstrung the industry. For days, the alarms baffled workers until the reactor was finally shut down. Although there were no fatalities and the experts insisted that there was no danger, the locals panicked. Much like the Gulf of Mexico oil spill in the summer of 2010, the media flocked to the scene as residents evacuated and a nationwide scare blossomed. Americans started to question the safety of nuclear power. Anti-nuclear sentiment spread through the nation like the flu; people knew next to nothing about nuclear power and they were scared.

More than thirty years later, the nuclear power industry is being reborn in Butler County, Pennsylvania. Toshiba-owned Westinghouse Electric Company has obtained design certification from the U.S. Nuclear Regulatory Commission (commonly referred to as the NRC) for their new reactor design, called the AP1000. With new projects developing and many companies showing interest in their technology, Westinghouse’s hard work is finally paying off. There are many successful corporations that have designed and sold nuclear technology all over the, but these recent years have seen some of the most important developments in the history of nuclear power. 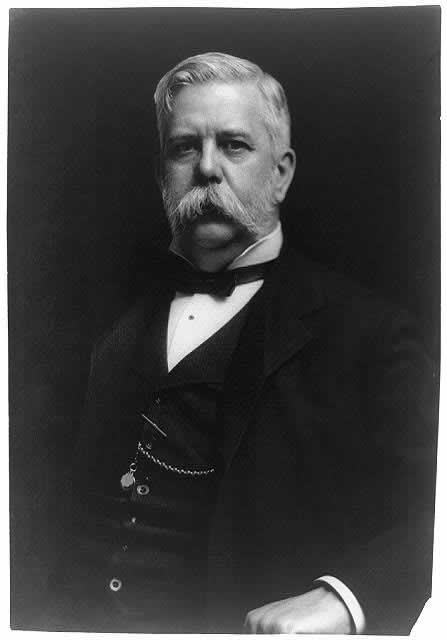 Joseph Gessford - Library of Congress
George Westinghouse was both inventor and business mogul.

Westinghouse has been embedded in Western Pennsylvania culture since its start in 1886. Founder George Westinghouse fought “The War of Currents” with inventor Nikola Tesla against Thomas Edison and General Electric in the late 1880s; this resulted in the AC electricity network America has enjoyed since the 1890s. Westinghouse’s business boomed thereafter, expanding to appliances, defense, and just about everything else. In the 60s, the conglomerate adopted the slogan “You Can Be Sure... If It’s Westinghouse” for its household appliances; the motto has since extended to Westinghouse Electric Company’s products: nuclear power plants.

During the closing years of the 20th century, Westinghouse had been moving away from engineering and industry, choosing to pursue broadcasting, housing, and credit interests instead. The company split in 1997, following a series of management changes and unsuccessful investments. Most of the company moved to Manhattan, where it is now known as CBS; the industrial business stayed in Pittsburgh and kept the name Westinghouse. At the time of the split, former chairman Donald Burnham worried that the “Westinghouse name [would] disappear.” There are few who would have disagreed.

Burnham’s fears were real, but did not come to pass. In 2006, Westinghouse Electric Company was sold to the Tokyo-based Toshiba Group. Since then, the company has kept the historic Westinghouse name and its “You Can Be Sure...” slogan, and continued to conduct its business out of the Pittsburgh area (and recently Butler County). At present, the burly engineer who founded Westinghouse in 1886 would be proud to see his company still moving power generation forward in western Pennsylvania.

Despite the stagnant nuclear power industry, one-fifth of all homes and businesses in the United States are still powered by nuclear plants and almost half of the world’s 440 nuclear power plants run on Westinghouse technology. Since the Three Mile Island accident, not a single new nuclear plant has been constructed in the United States, nor has a new design been certified by the NRC. This is finally changing. Domestically, the sites under construction in Georgia and South Carolina are the first new plants in thirty years and many more projects are being planned. How is the AP1000 design trying to change America’s mind about nuclear power? The answer is safety. 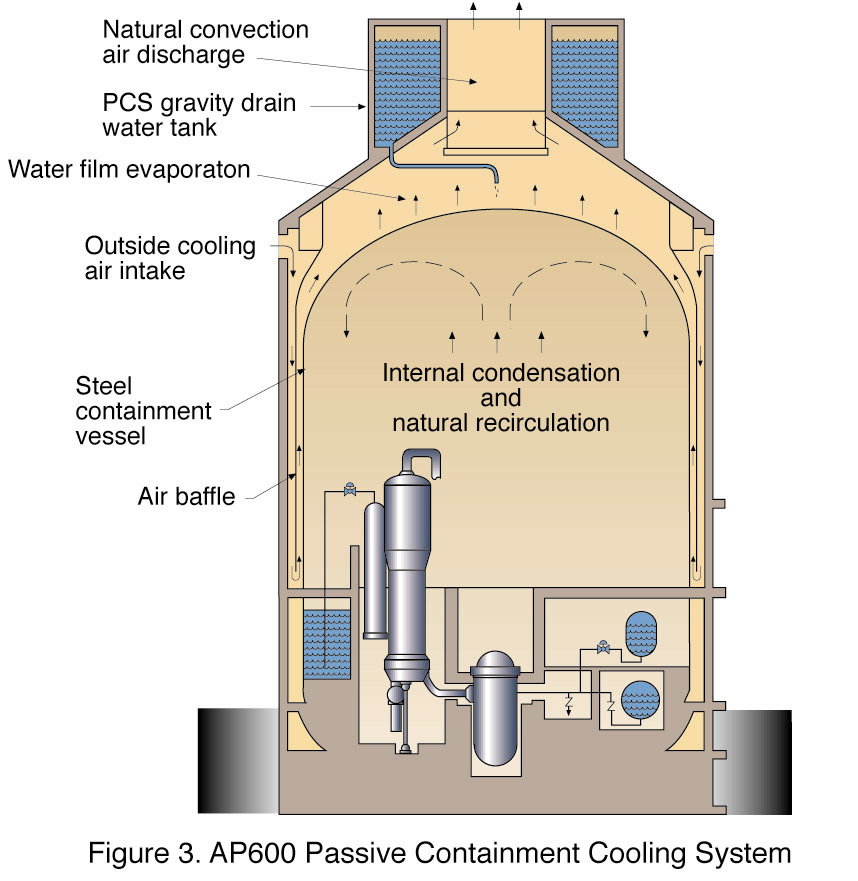 The AP (“Advanced Passive”) design uses the forces of nature--evaporation, convection, and gravity--to passively cool the reactor core in the event of an accident. The reactor’s containment vessel can be cooled by a stored water supply for days: in the event of an accident, this would prevent the containment vessel from rupturing and releasing radioactive material. Another AP1000 innovation is in the control room. The operators of the Three Mile Island plant were buffeted by alarms during the accident, but they couldn’t figure out what was wrong because the controls were not designed with safety in mind. In Westinghouse’s new design, the control room is more human-friendly, with alarms and status reports that help operators respond to potential problems much faster than in older plants.

The passive safety mechanisms combined with streamlined and operator-friendly controls is what makes the AP1000 Westinghouse’s safest nuclear plant to date. The “1000” in “AP1000” indicated the generating potential of the plant--each unit is capable of an impressive 1000 megawatts. Compared to the Hoover Dam’s 2080 megawatts, the AP1000 packs a lot of juice into a small space. The design is making waves in the nuclear industry, and the NRC is not the only entity taking notice.

As of 2008, China had already declared the AP1000 their technology of choice for the foreseeable future. Considering China’s expanding, billion-plus population, the forthcoming demand for power will be great, and Westinghouse stands to benefit accordingly. According to the Sanmen Nuclear Power Company, “China plans to spend some 400 billion yuan ($50 billion) on building around 30 new nuclear reactors,” which it plans to have in operation by 2020. Looking further into the future, China has expressed interest in starting construction on an astronomical 100 Westinghouse reactors by 2020, four of which are already taking shape. For some perspective, 40 AP1000s is enough to power all of Spain. The first AP1000 in the world, in Sanmen, Zhejiang Province, China is slated to enter operation in 2013. At the time of its groundbreaking in 2008, the “nuclear renaissance,” as Westinghouse calls it, was in full swing, and Westinghouse needed to expand to meet the demand for their new technology. 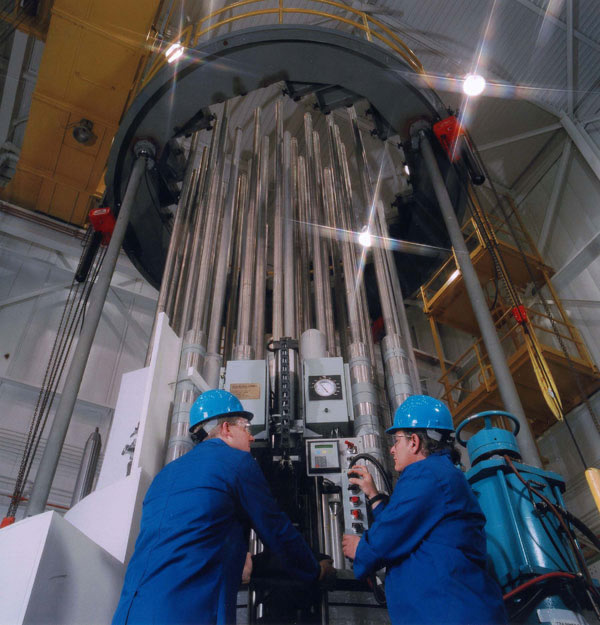 Westinghouse Nuclear
Inside a Westinghouse nuclear facility at Waltz Mill in Westmoreland County.

With the United States’ recent focus on “green” energy and the elimination of fossil fuels, nuclear power is back on the table. Westinghouse is quick to quote the U.S. Energy Information Administration’s finding that nuclear power accounts for over 72% of all greenhouse gas-free electricity production. American companies are taking notice, and Westinghouse has contracts with fourteen power companies around the U.S. to construct AP1000s; even more companies have expressed interest in adopting the technology. Fourteen power plants aren’t going to change the world, but they do mark the revival of American nuclear power.

In 2004, Westinghouse attempted to get rent relief on the last six years of their Monroeville, Allegheny County headquarters contract in exchange for extending said contract by another fifteen years. No such relief was given, and Westinghouse began looking for potential relocation and expansion opportunities. In 2008, Westinghouse started to move their world headquarters from Monroeville to Cranberry Township, Butler County. The new facility, which employs several thousand workers, is now complete, and most passersby have no idea the amount of time and planning that went into its development.

In this case, the company took bids in the form of tax incentives for their potential move. During the infant stages of the relocation, South Carolina offered Westinghouse $60 million more in tax incentives than Pennsylvania did. Pennsylvania and its politicians had to pull out all the stops, including upping their bid, to convince Westinghouse to stay. Pennsylvania won a great victory when Westinghouse decided to stay in the region. The nuclear renaissance would still have happened, but Pennsylvania would have lost thousands of high-paying jobs in addition to the economic growth that the Westinghouse headquarters has provided the state. As Westinghouse’s focus shifts from finalization of the AP1000 design to full-scale worldwide construction, more and more jobs will be created, and Pennsylvania will continue to reap the benefits for years to come. 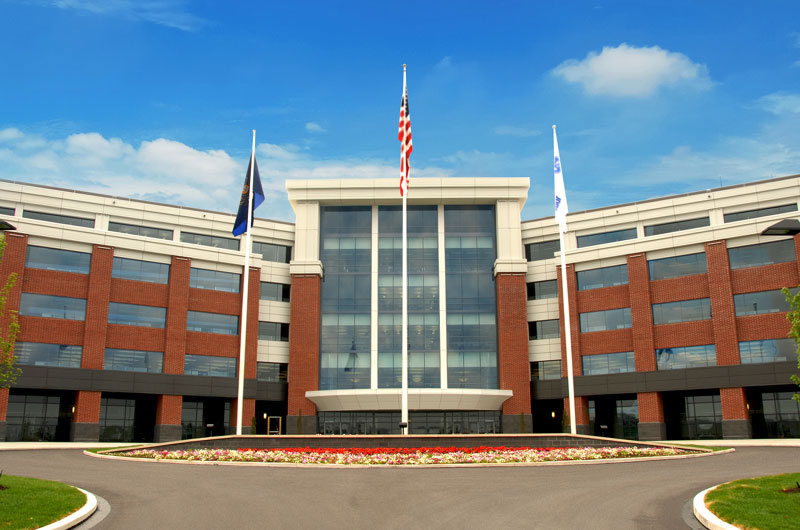 The 2011 earthquake in Japan created by the magnitude 8.9 tremors and tsunami that followed on March 11 has once again brought the risks of nuclear energy to the public eye. Questions have been raised regarding the Japanese government’s response and their willingness to share information with the public. While engineers and scientists working for nuclear power corporations evaluate potential accident threats every day, the fact of the matter is no such thing as an entirely foolproof system. Had the AP1000 been in use in Japan, Westinghouse’s William Cummins stated, “We wouldn’t have [had these explosions]. No.”

Nuclear power is nearly ubiquitous in some nations, such as France, where it accounts for around three-quarters of all electricity production. The story has been very different in the United States for three decades, but times are changing and Westinghouse is helping Americans to trust nuclear power again. With a newfound focus on safety and environmental preservation, companies in America and all over the world are embracing Westinghouse technology. As the company expands and evolves, eyes all over the world are on Westinghouse and its longtime home – Pennsylvania.