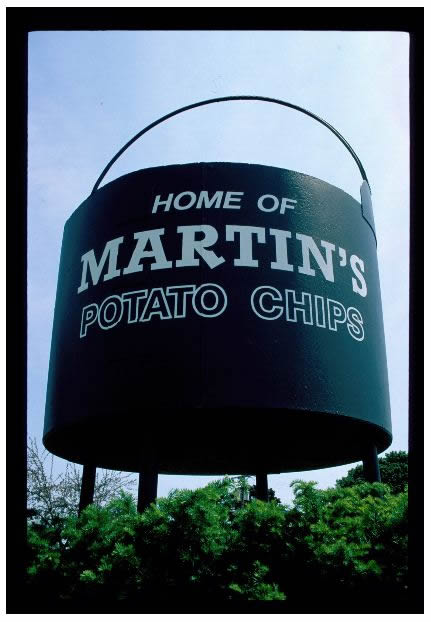 York County Convention and Visitors Bureau
VisitPA.com Media Room
Martin's kettle has been a York icon for many years.

Whether crunching down on a famous BBQ waffle chip, or savoring the taste of a freshly kettle cooked chip one thing is certain: Americans love potato chips. In fact, the Snack Food Association (SFA) estimates $4.5 billion in yearly sales. That’s a lot of potato chips! Americans’ affinity for this snack has allowed the Martin Potato Chip Company to serve the Central Pennsylvania Area, and to eventually branch out across much of the East Coast with its brand of original potato chips since the early 1940s.

Martin’s Potato Factory is located in York County, an area known for its “rich loamy soil” that is great for potato crops. In fact, York County is part of an area known as the “Potato Chip Belt” because so many regionally famous brands of chips come from this area, including Martin’s, Herr’s, Snyder’s, and Utz. This could explain why Pennsylvania is the leading manufacturer of potato chips. Since it takes four pounds of raw potatoes to make one pound of potato chips, it is no surprise that Pennsylvania is the thirteenth state in the nation for potato production.

When Harry Martin was a little boy, his mother would bring him to their stand in the local farmer’s market. In their stand next to theirs, the Utz family sold potato chips. Harry loved them, and soon his mother started making them at home for him. When Harry got married, he and his new wife Fairy decided to start producing potato chips themselves. Harry used his mother’s recipe, still the recipe used today. The process started in their kitchen, and they would sell the product in the local markets. This soon grew from their kitchen to a small factory, where they would supply not only their local market stands, but mom-and-pop stores as well. Since its founding, the Martin Potato Chip Company has boasted freshness. Chips were made daily, as were deliveries to the stores. This allowed for optimal freshness and the best possible potato chip they could offer. 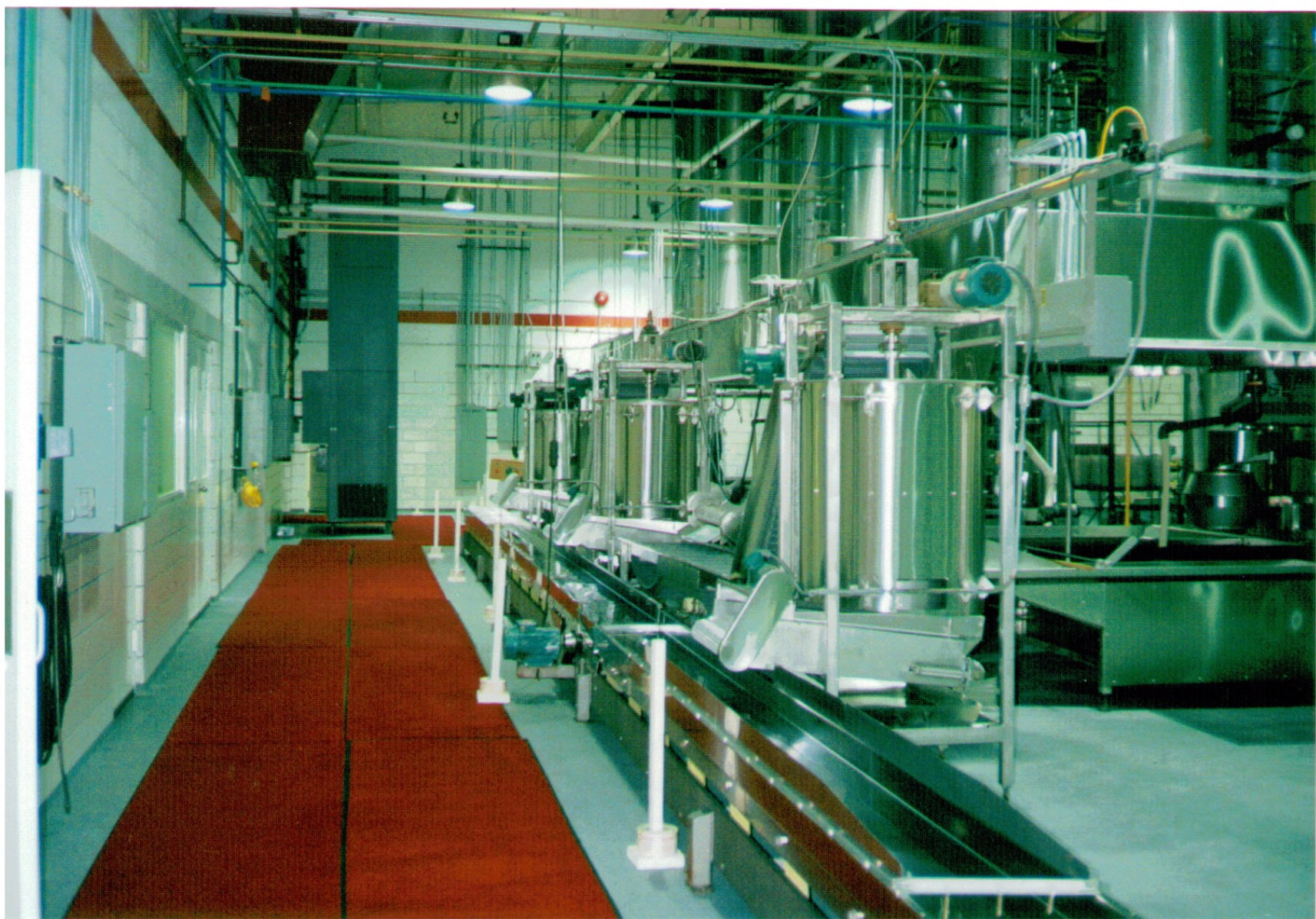 Martin's Potato Chips
Martin's many varieties of chips wend their way through the multiple lines of their York County factory.

In 1971, thirty years after the company’s inception, the business was sold to another family, the Potters. When Ken and Sandy Potter took over, they kept the Martins on the payroll as employees. The Potters also started to branch out more, expanding further along the East Coast to places such as Maryland and New York. In 1985, Ken Potter decided to take Martin’s global. He partnered with a company in China, and helped to assist and to advise Arnott’s Biscuits Ltd., an Australian snack company. Recently, Mr. Potter has also advised a British firm. Martin’s brand can even be found flying high above the ground. Air Force One has been a customer of Martin’s chips, with Presidents Bush and Clinton enjoying different flavors.

As popular as potato chips are in this country, the industry has not been without criticism as the public becomes more health conscience. Potato chips cooked in partially hydrogenated oils contain significant amounts of trans fats, which are said to raise levels of “bad” LDL cholesterol and lower levels of “good” HDL cholesterol.

Switching from partially hydrogenated oils to different oils has not been easy for potato chippers. The hydrogenation process prevents the oil from going bad and allows the manufacturers to manipulate the melting point of the oil.

Martin’s is one of the chippers who have chosen not to switch oils at this time. President and CEO Butch Potter says, “Many consumers who are more likely to follow advice from their television set are less likely to eat potato chips anyway.” 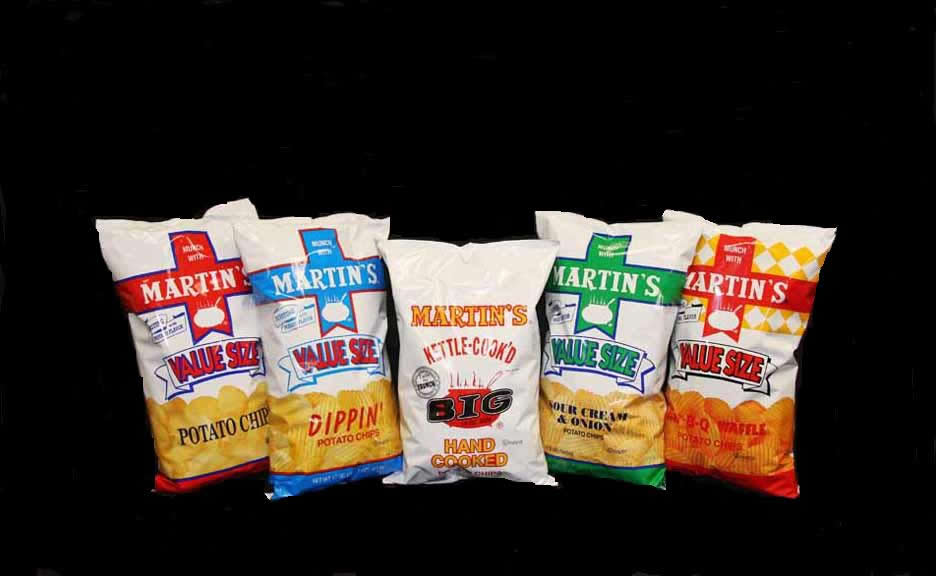 Today, Martin’s Potato Chips come in variety of flavors to suit every customer’s needs. The most popular chips Martin’s has to offer are their kettle cooked chips and BBQ waffle chips. More recently Martin’s has added other items like popcorn and pretzels. Dirk Burhans writes in his book Crunch!: A History of the Great American Potato Chip that in a recent visit to a grocery store, potato chips accounted for about seventy-six feet of horizontal shelf space. Among these chips were fourteen different brands and countless different flavors to choose from. It is because of this that Martin’s must continue to be innovative and at the forefront of the potato chip industry.

For the past 20 years, Martin’s has taking recycling initiatives. As Butch Potter says Martin’s plant was “green before green was cool.” They send any peel waste, potato pieces too small to use, and bad chips to feed local dairy cows. Any dry dirt that leaves the plant is put into a manure spreader and land applied by a local farmer and along with any wet mud. The plant also recycles old metal parts and wire for scrap metal content.

“We’ve been taking on these recycling initiatives for over 20 years,” says Potter. “My dad was always mindful of minimizing waste and the cost of waste disposal, so he looked for alternative methods. His efforts were aided by a local farmer, Bill Myers, who had a knack for what is now called ‘thinking outside the box,’ combined with a work-your-tail-off mentality.” 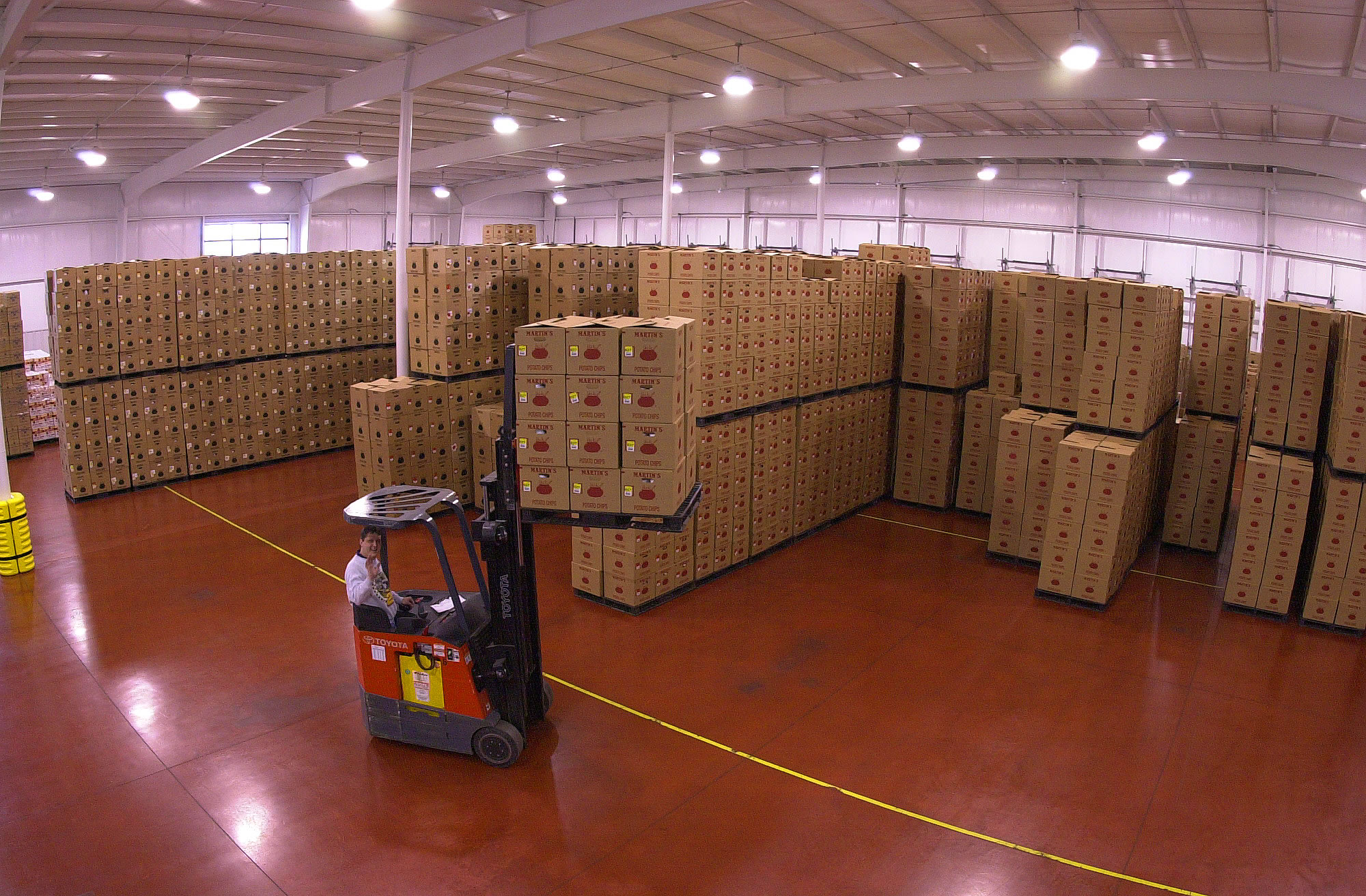 Martin's Potato Chips
Martin's warehouse stores enormous quantities of chips, waiting to send them all over the Commonwealth and beyond to satisfy our savory cravings.

Tours are available of their current factory that bags 1.5 million bags per month. They walk visitors through the production area and demonstrate everything that is done to create a final product. At the end of the tour there is an opportunity to taste the chips directly as they come off the conveyor belt, still warm and oven fresh.

What started in the kitchen of a local York farming family has evolved into a multinational organization that boasts customer satisfaction. When Harry and Fairy Martin created their brand of potato chip in the early 1900s, little did they know they would be setting the foundation for one of the more popular snack foods 60 years later.