Meadowcroft: Peering into America's Ancient Past 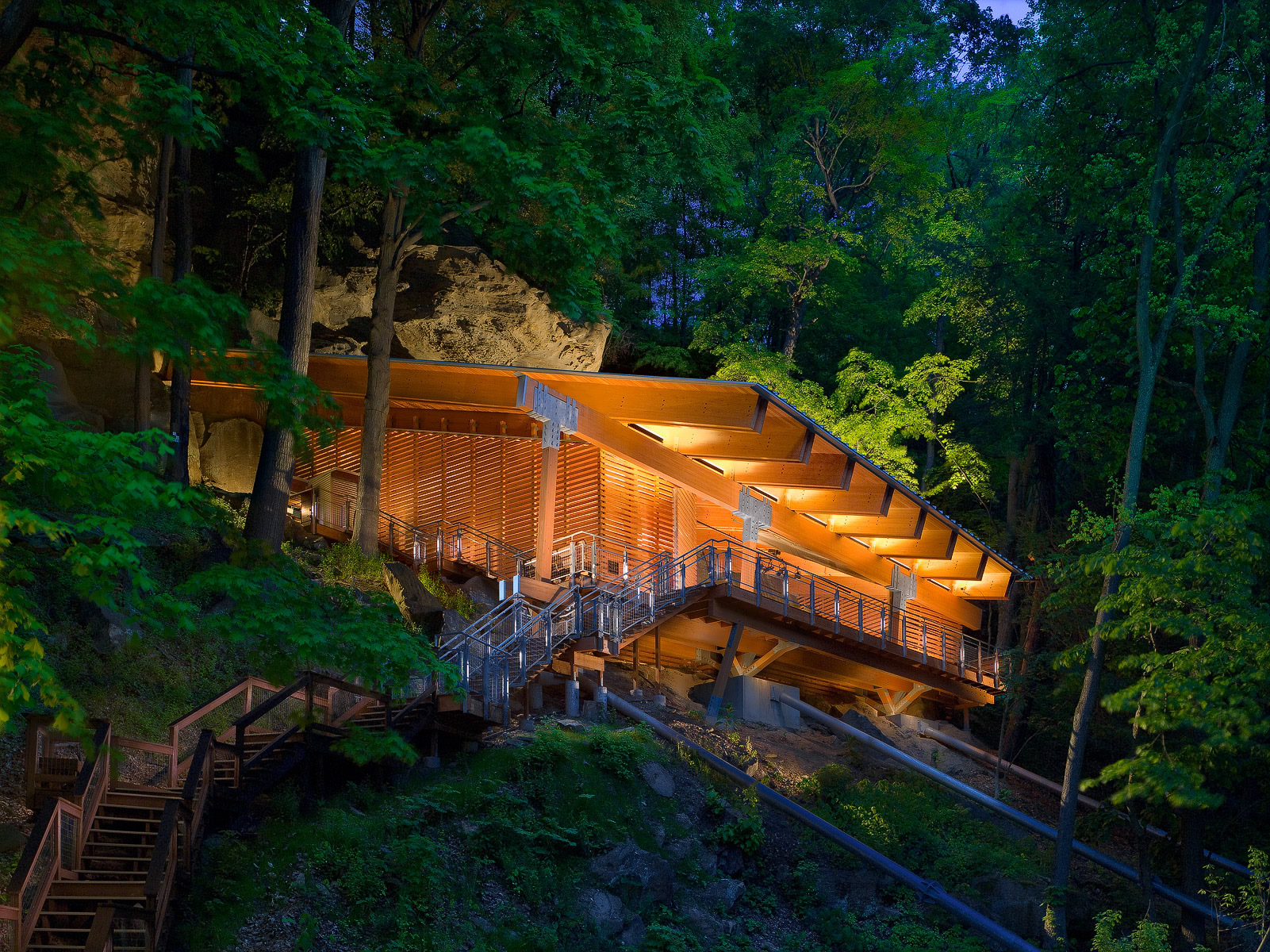 Ed Massery
The new shelter at Meadowcroft has allowed many more visitors to see the amazing site.

An ancient tribe of hunter-gathers sharpened their flint spearheads in a rock shelter located in the southwestern part of present day Pennsylvania. Perched high atop the yellow sandstone mountain and away from what would be called Cross Creek, they were safe from flooding, but still had a convenient freshwater source. Here they could also rest their weary bones after a long day of hunting deer, elk and other large game. When the hunt for big animals did not succeed, they could search for a wide variety of smaller protein sources: fish, birds, and mollusks from the water below their shelter. Though family groups would not necessarily return in a yearly migratory cycle, the early occupants of this shelter would come back episodically over the course of several thousand years.

Today this site, now known as Meadowcroft, is a National Historic Landmark located in Washington County where visitors can come to get a glimpse into one of the oldest human cultural sites in North America. Meadowcroft Rockshelter is a site where archeologists have found evidence of human life that dates back nearly 16,000 years. It is believed that native peoples occupied the site until about 700 years ago, according to the most recent radiocarbon dating. It would see occasional use by the natives through the 18th century, as well as by European settlers and, eventually, by local teenagers through the 1970s.

The Meadowcroft property had been used as a farm since 1795 and was owned by the family of Albert Miller. On November 12, 1955, Albert Miller discovered there might be more to his property than he had ever imagined. On that day, Miller discovered a groundhog hole that contained flint flakes and burnt bone. He dug a little deeper to discover a flint knife. 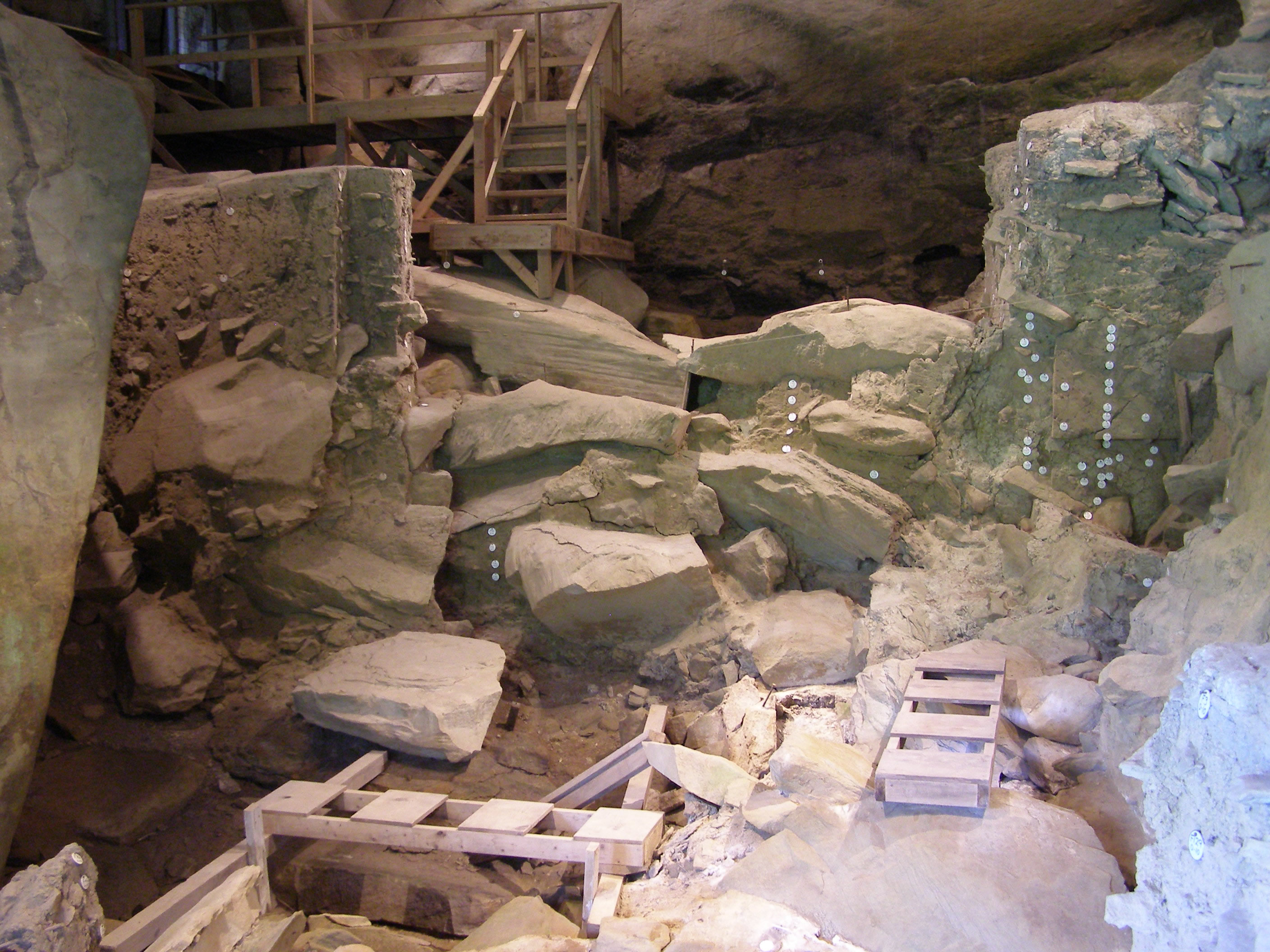 Joe Katrencik
The new shelter at Meadowcroft has allowed many more visitors to see the amazing site.

“He was very well-read and somewhat of an amateur archaeologist himself,” says David R. Scofield, Meadowcroft’s current director. “Albert, having grown up here, always suspected this was an area populated by native peoples.”

That day, Miller’s findings confirmed his suspicions. He kept his discoveries a secret because he was afraid to attract looters. He decided the best strategy would be to keep the discovery a secret until he could find a professional archeologist to excavate the site properly.

After the discovery, the Miller family opened Meadowcroft Village which showcased a section of their property as a rural village as it would have looked in the 19th century. In 1969, the Meadowcroft Foundation was founded to own and operate the village. Although a lot was going on above-ground, the treasures below the surface of the property were still kept secret the entire time.

Dr. James Adovasio was an archeologist working for the University of Pittsburgh at the time. Adovasio was leading a team of students to find an archeological field school in western Pennsylvania. Adovasio heard about Meadowcroft in 1973 and thought the site might contain enough work to keep them busy. When Miller met Adovasio, he realized that he was just the archeologist that he had been waiting for to uncover the remains he had found. Adovasio and his team of University of Pittsburgh students began excavating and studying the site in June 1973. The crew didn’t have very high expectations of what they might find, and never anticipated that their research would make history.

“We did not realize the depth of the deposits or its antiquity,” says Adovasio. “It was almost serendipitous. It was literally nothing anyone had anticipated.”

The archaeological team found a wide array of artifacts including stone tool fragments, whole tools, projectile points, pottery fragments, and wooden instruments. To figure out exactly how old these artifacts actually were, the archeological team conducted radiocarbon dating testing on them. To everyone’s surprise, the tests revealed that some of the artifacts dated back 16,000 years. One specimen, a cut piece of bark that may have been used as a basket, may have been up to 19,000 years old.

Up to this point, scientists had believed that the earliest people populated North America only 11,000 years ago. In the 1930s, Clovis, a site in New Mexico was found to have artifacts which dated back 11,000 years, and was believed to contain the oldest remains in the United States. 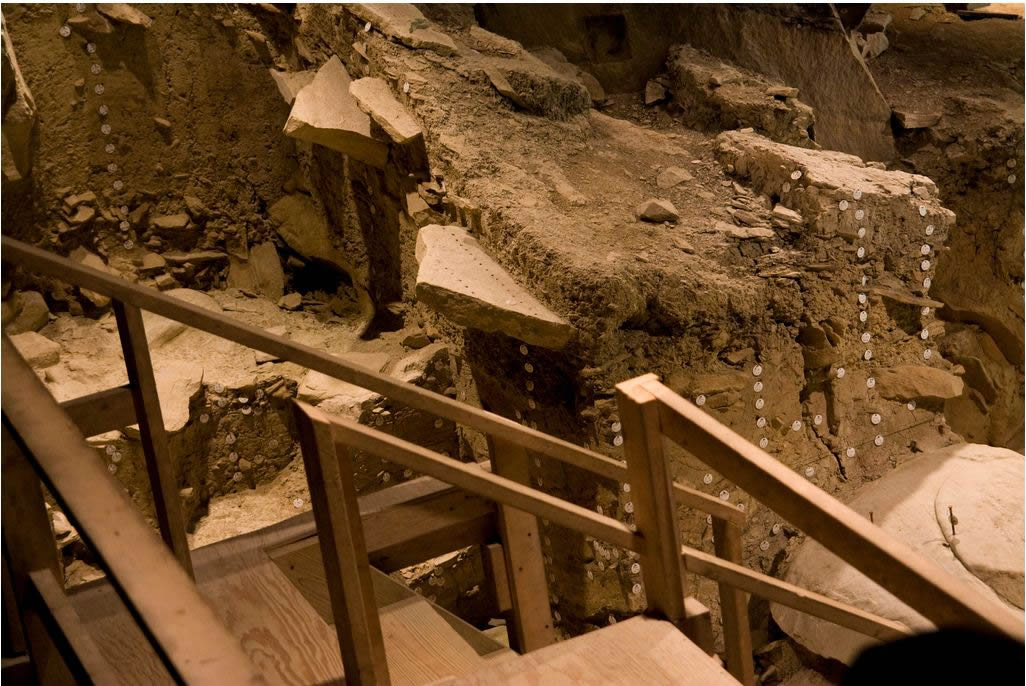 George Silvaney
Layers of the dig have yielded amazing artifacts from further back in history than most would have guessed.

Since Clovis had traditionally been credited to hold the oldest remains for many years, the discovery of Meadowcroft created quite a controversy. The news was made public just nine days before President Nixon resigned, the Meadowcroft discovery was published on the front page of the Washington Post (perhaps to distract the public from the resignation predicament). The story quickly became recognized both in the United States and internationally. However, many scientists refused to believe that Meadowcroft lived up to everything it claimed. Many stuck by the belief that Clovis was still the first Native American site in North America. Despite skeptics, other sites which dated back to similar periods popped up over the years and backed up the validity of Meadowcroft’s findings.

Over the past 30 years, 20,000 artifacts have been found at the Meadowcroft site, including 956,000 animal remains and 1.4 million plant remains. Interestingly, elk remains were found at the site, a species no longer found in southwestern Pennsylvania but prevalent further north. Other remains include deer, bird eggs, mussels, hackberries, nuts, and other fruits and seeds.

The rock-shelter was formed from the flowing waters of the nearby Cross Creek. As the creek zigzagged through the valley, the rock shelter was carved out under sandstone. It is believed that as early natives wandered through the area, they used the rock shelter as a place to stay to escape the elements. It was also a convenient place to stay because the creek nearby provided an adequate supply of drinking water. The rock shelter is thought to have been a temporary campsite for travelers. As the years went on, fragments of rock fell from the rock overhang to the ground and eventually encapsulated everything that was inside. This is how the artifacts were preserved in such a complete fashion.

Meadowcroft has recently undergone multiple renovations and changes that will make the actual rock shelter much more accessible to the public. In 2008, an observation deck and attachment were built in the actual rock shelter. Prior to this $4 million renovation, there was only limited access for the public. Now instead of just hearing about the rock shelter and its contents, visitors can actually come and see much more of it for themselves. As part of the renovations, a new roof was built, and two observation decks were put into place. These new decks make it possible to look into the shelter from beneath the roof. These new structures will give visitors a closer view into the shelter, and now onlookers can feel like they are right in the excavation. 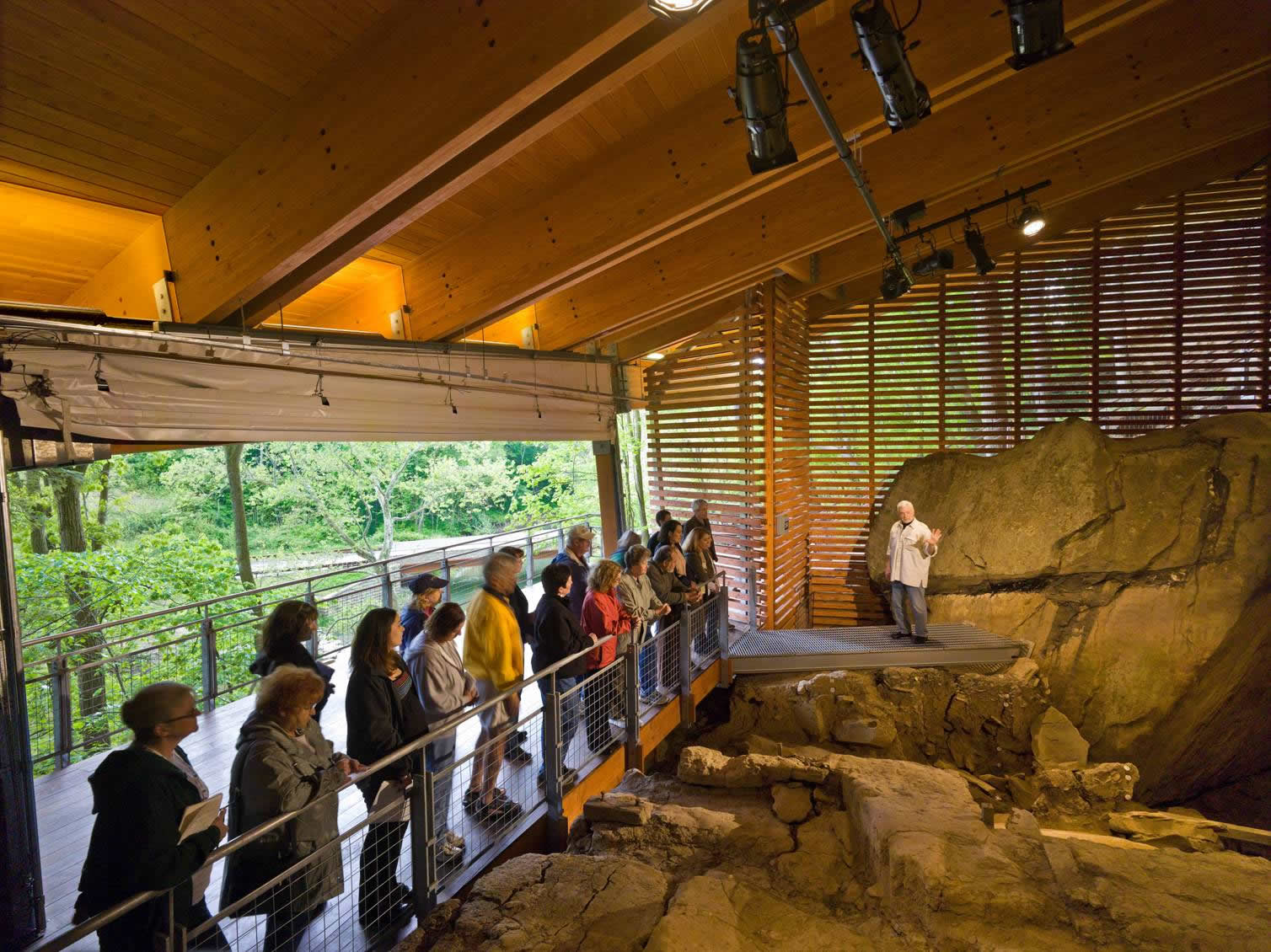 Ed Massery
Docents lead visitors through the wonders of the prehistoric site.

The site is attracting many new visitors now that the new facility over the rock shelter is in place. The 19th century rural village created by the Miller family is still running, along with a new late-prehistoric Indian village. This new attraction has been created to show what the area was like before European influence, and to teach visitors about the native people who may have visited the rock shelter. There are also plans to open a third exhibit, featuring a representation of a mid-18th century frontier farm. This educational village would showcase how Europeans interacted with the native people they came across in the area.

Meadowcroft is undoubtedly one of the most fascinating historical sites in Pennsylvania. It has been acknowledged as a Pennsylvania Commonwealth Treasure, the highest achievement for a historical site in Pennsylvania. Meadowcroft has also been named an official project of Save America’s Treasures by the National Trust for Historic Preservation. The National Trust for Historic Preservation is a nonprofit organization dedicated to restoring America’s valuable historic places and communities. Meadowcroft also had the honor of being designated a National Historic Landmark in 2005. With all the new improvements and progress that is taking place there, it is certain that the story of its rich history will continue to live on for many years to come.

The Center would like to thank Dr. James Adovasio, Joe Katrencik, and George Silvaney for their assistance illustrating this article.