A Meal Disguised as a Sandwich: The Big Mac 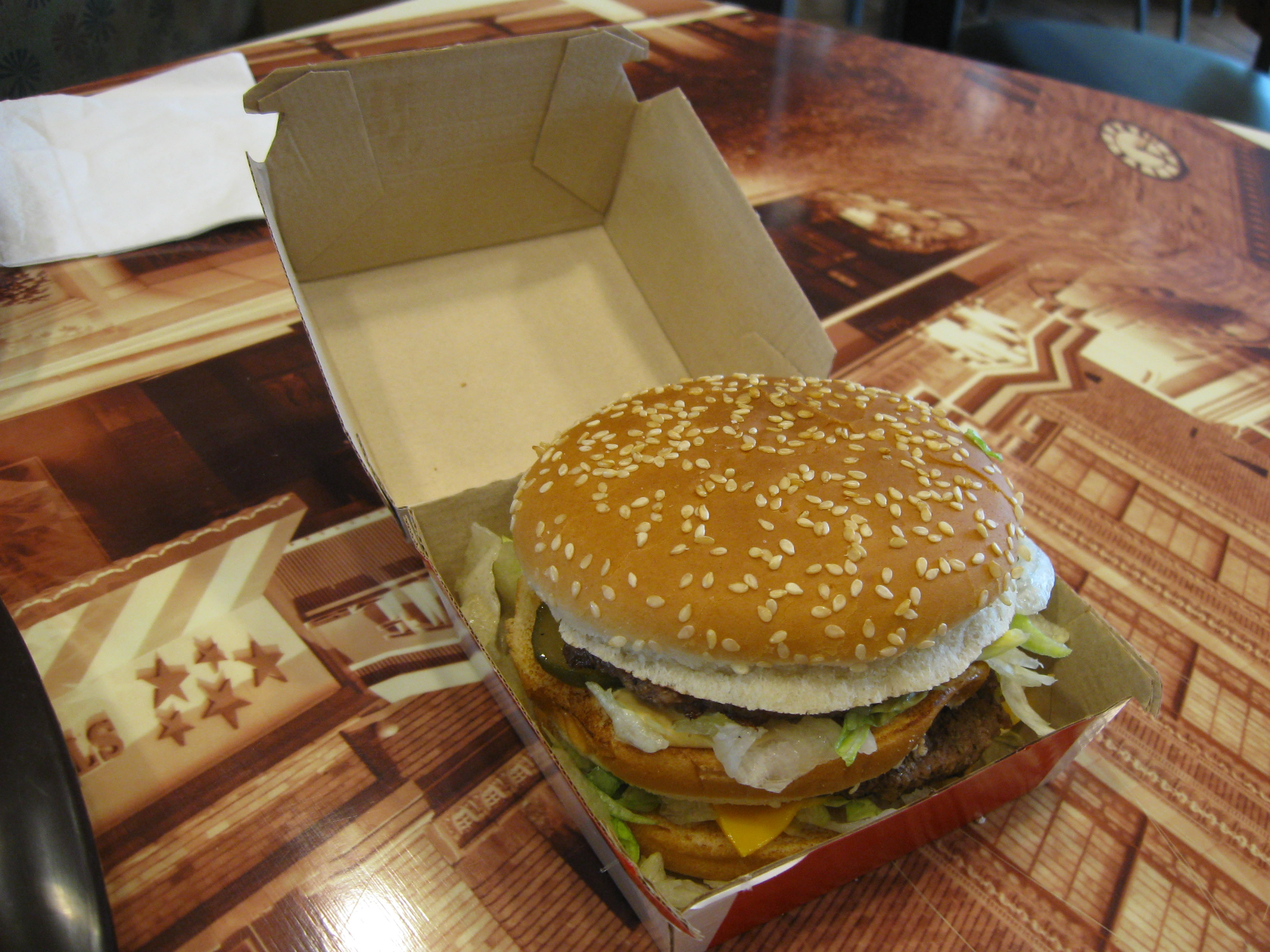 A hamburger built of two 1.6oz beef patties, special “Mac” sauce (akin to Thousand Island dressing), iceberg lettuce, American cheese, pickles, and onions, all served on a three-part sesame seed bun, sounds more like a day’s worth of food than a single sandwich. From modest beginnings as an early McDonald’s franchise owner in the 1960s, Jim Delligatti used persistence and innovation to develop the Big Mac, which first sold for 45 cents. The sandwich was originally test-run in a dozen Delligatti McDonald’s stores around Pittsburgh before being added to the national McDonald’s menu in 1968. The Big Mac is now sold internationally and is one of the company’s signature products.

Michael James Delligatti was born in Uniontown, Fayette County in 1918. Delligatti’s father’s job forced the family to move frequently. He never went to college and started his career working for Isaly’s Dairy, a chain of family-owned dairies and restaurants, in the 1950s. By the mid-50s, Delligatti wanted to open his own restaurant and decided to attend a restaurant show in Chicago in 1956. At the show, a McDonald’s booth caught Delligatti’s attention and led to an invitation to a McDonald’s that had just opened in Illinois. Delligatti discovered if he went with McDonald’s, the money he’d save on paper goods purchased through the company would pay for his franchise fee. 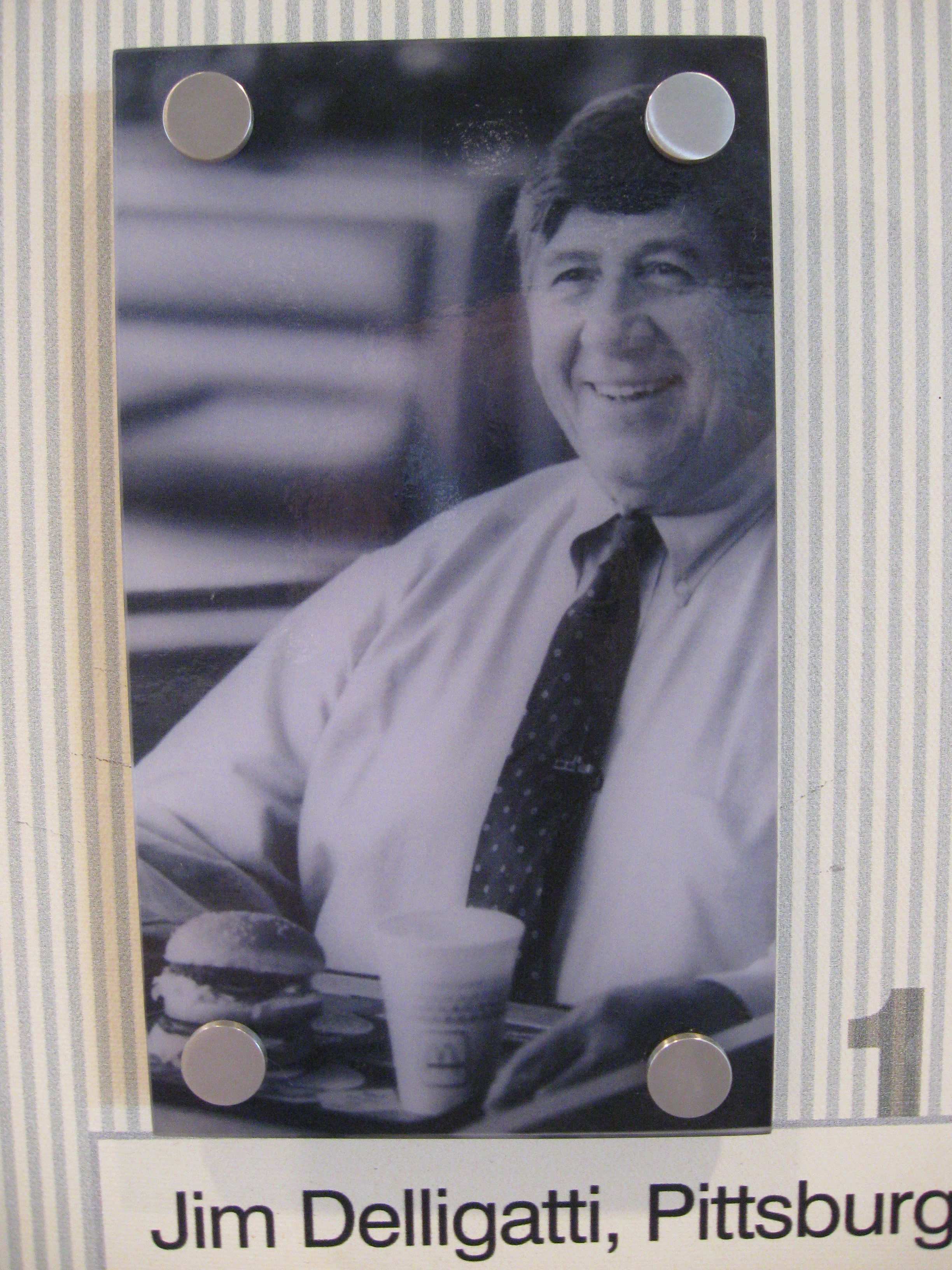 Alan Jalowitz
Jim Delligatti with a Big Mac as seen in a picture at the Big Mac Museum.

In 1957, Jim Delligatti opened his first McDonald’s on McKnight Road in the North Hills area of Pittsburgh. He was one of McDonald’s earliest franchise owners; by the 1960s, he was operating a dozen stores in the Pittsburgh area. Delligatti had an exclusive territorial franchise for metropolitan Pittsburgh but was struggling with sub-par store volumes. He decided that the only way to broaden his customer base and increase sales was to add to the McDonald’s menu.

For the next few years, Jim Delligatti spent time and energy to create a new product for the McDonald’s menu. Delligatti used every opportunity to partner with other multi-store franchise owners and McDonald’s top managers and discuss the need to improve the menu to gain sales through a new target market. Delligatti’s eventual idea was to combine two-all beef patties, special sauce, lettuce, cheese, pickles, and onions on a sesame seed bun. The special sauce recipe remains a secret, but it is recognized as a variant of Thousand Island dressing. Original names for the burger included “Aristocrat” and “Blue Ribbon Burger.” The name “Big Mac” was created by Esther Glickstein Rose, a 21-year-old Advertising Secretary who worked at McDonald’s Corporate office in Chicago.

Delligatti’s sandwich idea was not wholly his own, however. Bob Wian, the founder of the Big Boy drive-in chain, virtually built his entire franchise around a double-decker sandwich. Delligatti was introduced to this type of sandwich when he managed a Big Boy drive-in in the early 1950s in southern California. When Delligatti started looking for new menu items Wian’s Big Boy sandwich quickly came to mind. Delligatti said that inventing the Big Mac “wasn’t like discovering the light bulb. The bulb was already there. All I did was screw it in the socket.” 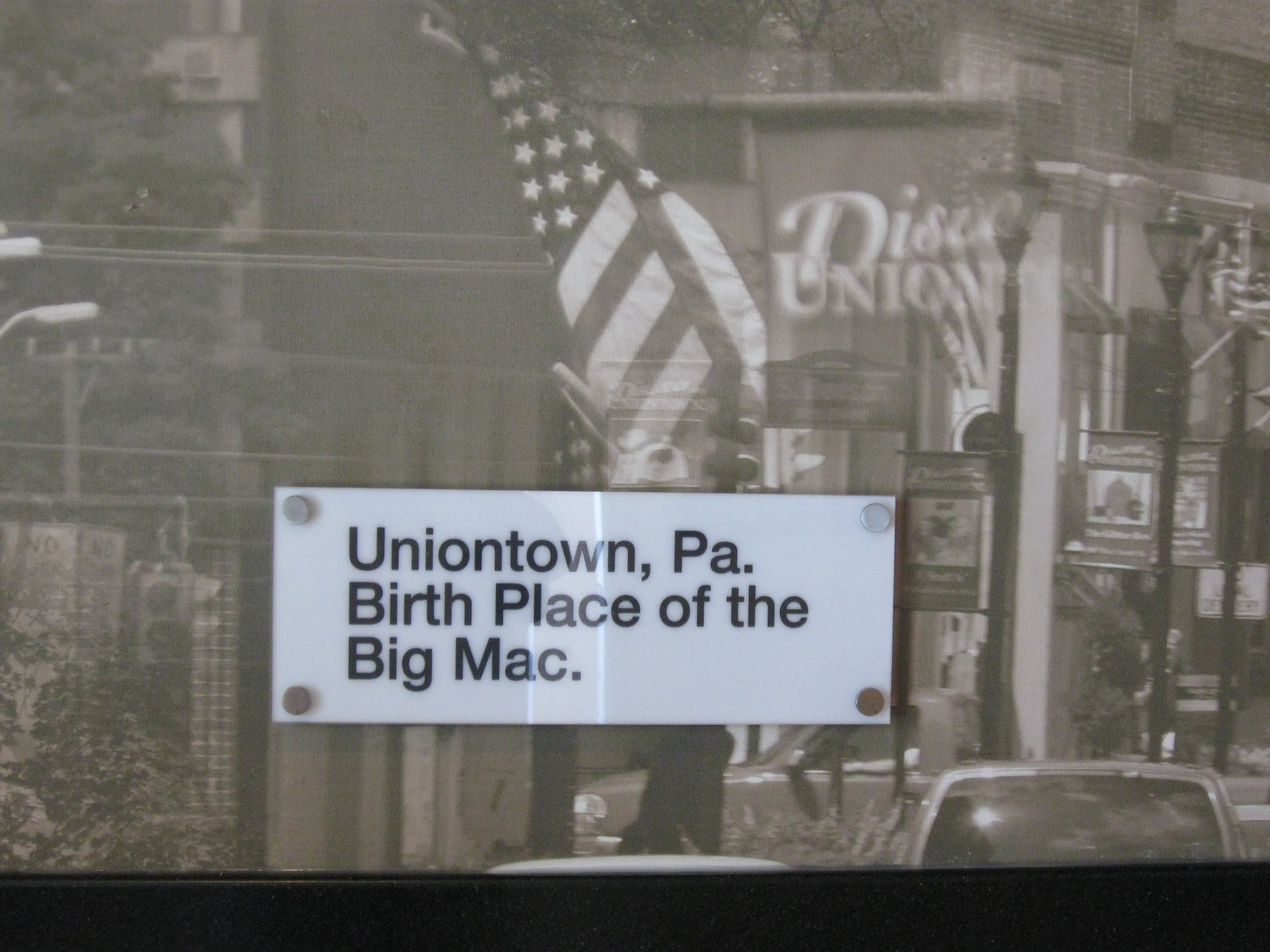 Alan Jalowitz
Uniontown is proclaimed the home town of the Big Mac on this exhibit at the Big Mac Museum.

One of Delligatti’s obstacles in getting the Big Mac approved for sale was its proposed price of 45 cents—twice that of a regular cheeseburger. It took the support of Ralph Lanphar, a regional manager in Columbus, to obtain corporate permission to test the Big Mac. This permission was limited—Delligatti could only test the sandwich at his Uniontown store, and he was told he had to use the standard McDonald’s bun. When this bun proved far too small for all the contents of the Big Mac, Delligatti ignored management’s requests and ordered a larger, three-piece bun. Within a few months, the new Big Mac was increasing the Uniontown store’s sales by better than 12 percent. The sandwich was a hit.

Due to the success in the Uniontown store, the Big Mac was soon sold in all of Delligatti’s stores. When each of these stores showed significant gains, McDonald’s managers and franchise owners elsewhere looked to Delligatti and his stores for information on his new sandwich. The McDonald’s chain added the Big Mac to other test markets, and when all of them scored 10 percent or better in sales gains, the new product was finally put into nationwide distribution in 1968. It had taken Delligatti nearly two years to the sell the company on the idea.

It wasn’t long before McDonald’s became the largest fast-food chain in the United States, with 2,220 stores generating an annual income of $1 billion. The price of the Big Mac rose to 49 cents. By the end of the next year, Big Mac sales accounted for 19 percent of all McDonald’s sales. More importantly, the new sandwich had greatly expanded the chain’s target markets by attracting adults who had previously overlooked McDonald’s. The Big Mac became the most recognized item on the menu and the focal point for marketing.

Poster slogans for the Big Mac ranged from “A Meal Disguised as a Sandwich” to “Open wide and say Ahhhh!” When the Big Mac was introduced to television, advertisers’ main goal was to explain the contents of the sandwich, but still keep it light-hearted and enticing. The first commercial, “Big Attraction,” used a diagram to point out all the ingredients, as if the sandwich were a three-story monument. 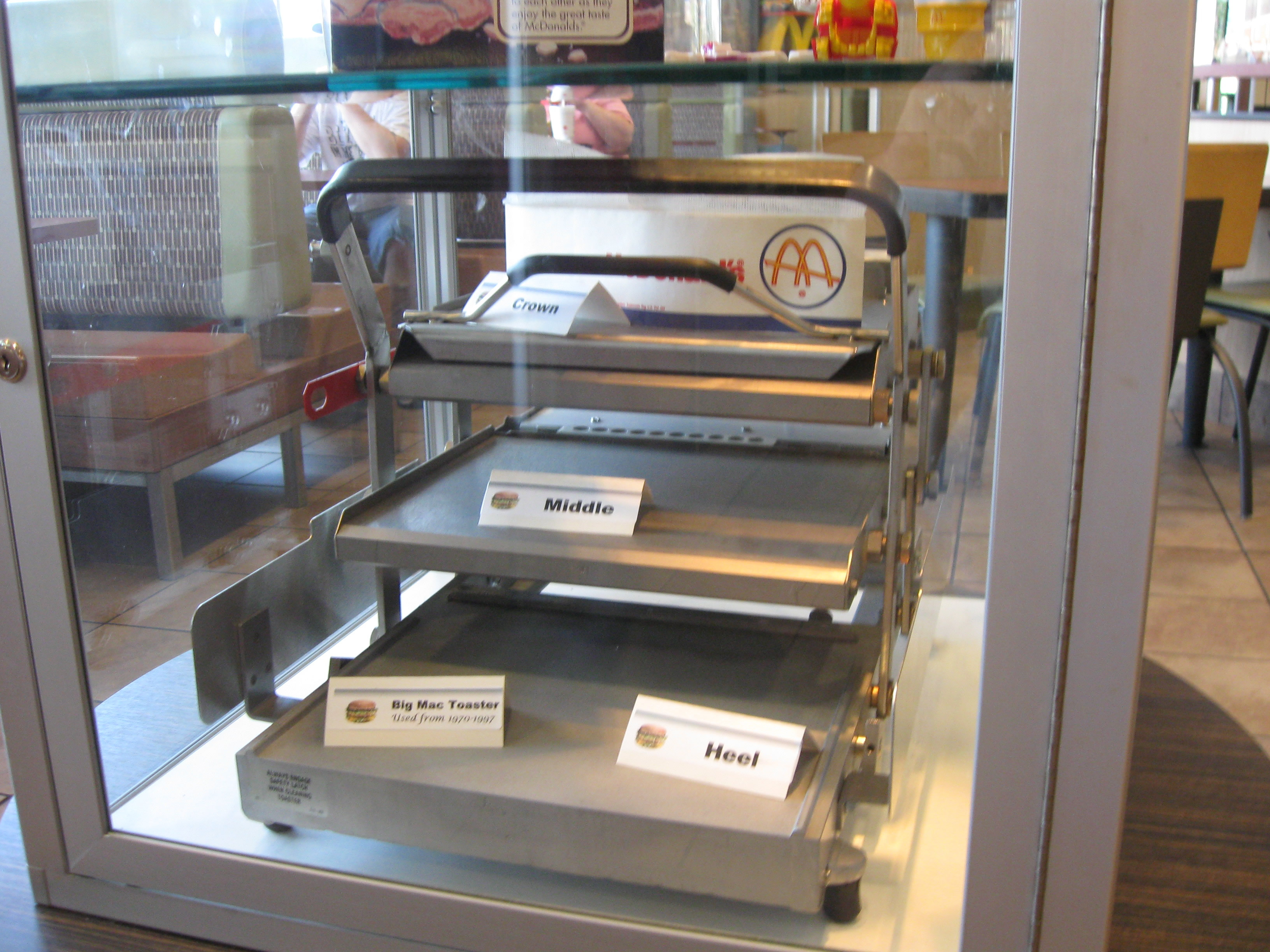 Alan Jalowitz
This toasting machine was used to toast the various layers of the Big Mac's bun.

For its next approach, the advertising team released a tongue-in-cheek commercial featuring an actor rapidly and flawlessly reciting every last ingredient in the Big Mac: “Two all beef patties special sauce lettuce cheese pickles onions on a sesame seed bun.” The commercial did not catch on to consumers until a franchise owner, Max Cooper, concluded that the problem was the lack of real consumers to play the game. Thus, Cooper instructed his local advertising agency to produce a radio commercial consisting of actual recordings of customers at his stores attempting to recite the Big Mac ingredients. Consumers that were able to do this correctly within four seconds got a free Big Mac. The ads became an instant hit in Cooper’s stores and within a few weeks radio stations were co-sponsoring contests to recite the Big Mac tongue twister. Soon after, success of the ad bloomed all over the US and made its way back to McDonald’s headquarters. In 2003, McDonald’s revived the jingle combined with the “I’m lovin’ it” campaign, in which a rapper rapidly states the trademark in the background music.

Another huge success for McDonald’s and their Big Mac was in 1981 when the corporation developed a national instant winner contest called “Build a Big Mac.” The contest consisted of consumers being able to win prizes ranging from a free soda to the grand prize of $100,000; in all, they offered $8 million in potential prizes. The contest increased McDonald’s volume nationwide some 6 percent. The success of the “Build a Big Mac” contest trigged a game card mania in the fast-food business and within a year other retail chains also had their own instant winner game cards, much like the McDonald’s one.

The McDonald’s Company’s recipe for the Big Mac’s national success consists of product recognition and a commitment to quality. In 2007, the Big Mac celebrated its fortieth year. In these forty years, billions of sandwiches have been sold. The Big Mac sells about 550 million a year in the United States and is available in more than 100 countries. “The Big Mac is certainly one of our most popular sandwiches,” says spokeswoman Danya Proud. It was famously one of President Bill Clinton’s favorite snacks.

Today, the Big Mac sells for an average price of $3.00 and weighs nearly a half-pound, with 540 calories and 24 grams of fat. 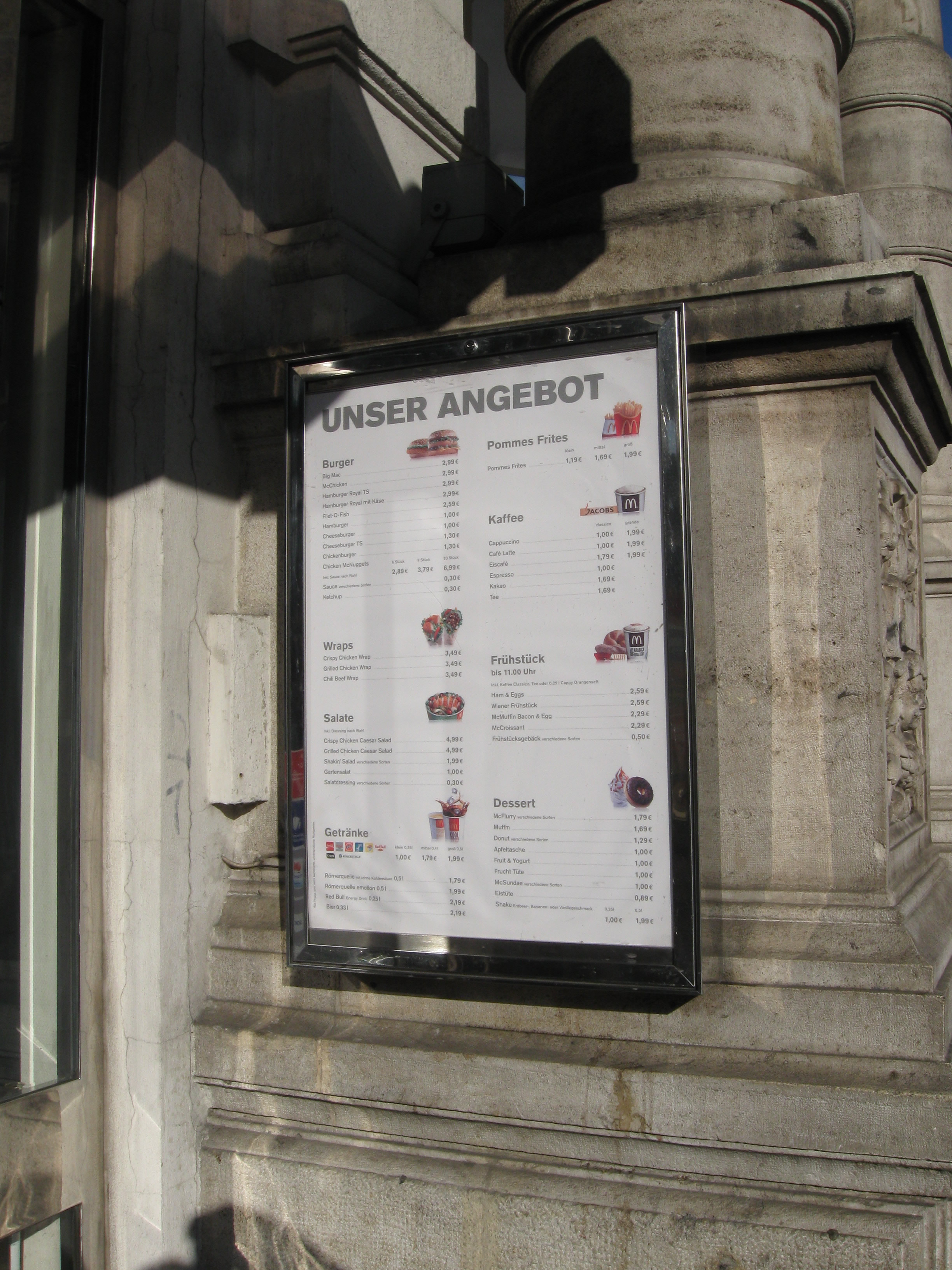 Outside the U.S., the Big Mac goes by other names: the Mega Mac in parts of Eurasia; the Double Big Mac in Canada; the lamb or chicken-patty Maharaja Mac in India. The McDonald’s Corporation had to adapt to native cultural norms in the case of India. While eating beef is perfectly acceptable, and even encouraged, in many cultures, it is taboo in Hindu India as the cow is regarded as a sacred creature.

The Big Mac is known worldwide and is often used as a symbol of American capitalism. Economist.com explains a concept developed by economists called the “Big Mac Index,” or “Burgernomics:”

Burgernomics is based on the theory of purchasing-power parity (PPP), the notion that a dollar should buy the same amount in all countries. Thus in the long run, the exchange rate between two countries should move towards the rate that equalizes the prices of an identical basket of goods and services in each country. Our ‘basket’ is a McDonald’s Big Mac... (and) the Big Mac PPP is the exchange rate that would mean hamburgers cost the same in America as abroad.

The Big Mac Index attempts to make the exchange-rate theory more comprehensible and is the world’s most accurate financial indicator. Comparing actual exchange rates with the Big Mac PPP can indicate whether a currency is under- or overvalued. 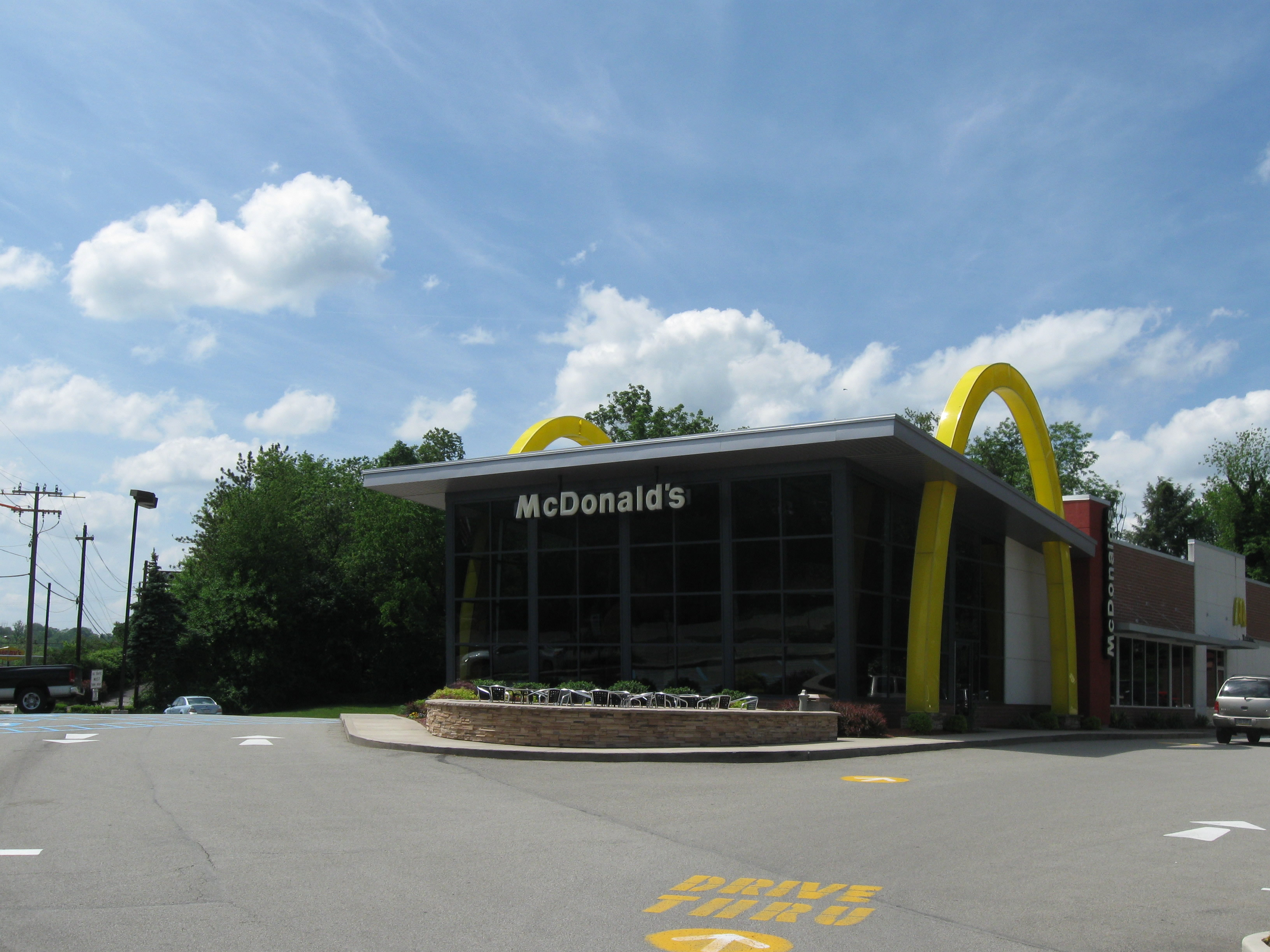 Presently, Jim Delligatti and his family still own twenty-one stores in Western Pennsylvania and North Carolina. They have opened forty-seven restaurants but sold many back to the corporation. In a 2005 interview, Delligatti said that when he visits his hometown of Pittsburgh, he eats at McDonald’s every day. Delligatti was also asked if he made any royalties on Big Macs sold around the world. Delligatti responded, “Oh yes, I get a dollar apiece.” He then chuckled and said “No honey. I don’t get anything. I’d love to have a tenth of a cent.” When Delligatti was asked if he would reveal the ingredients of the Big Mac’s special sauce, he chuckled: “It’s still a secret.” Alan Jalowitz
A statue of the Big Mac's creator, Jim Delligatti, in the Big Mac Museum. 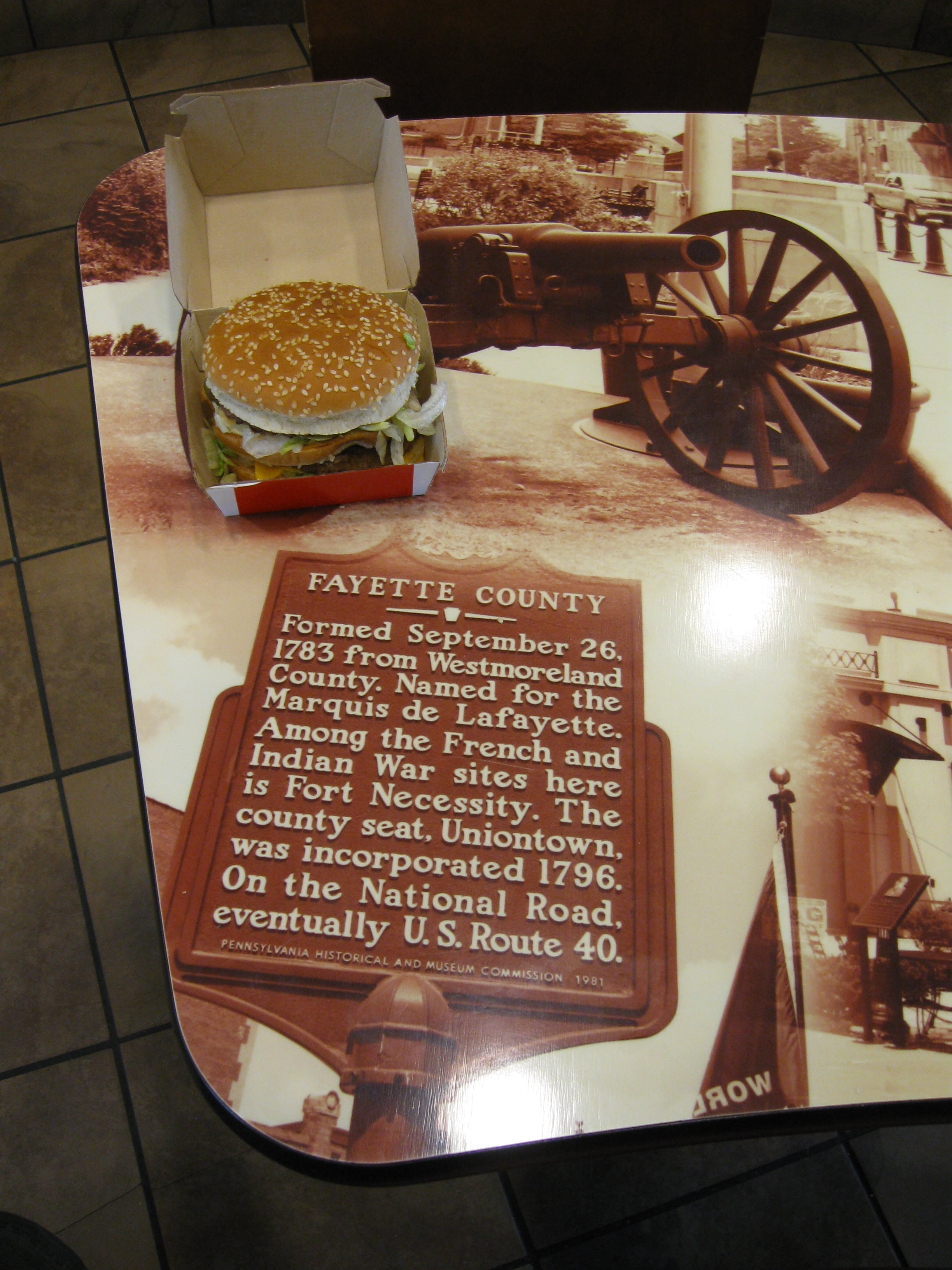 Ignacio A. Sanchez
A picture of a Big Mac on a table decorated with Fayette County images at the Big Mac Museum. 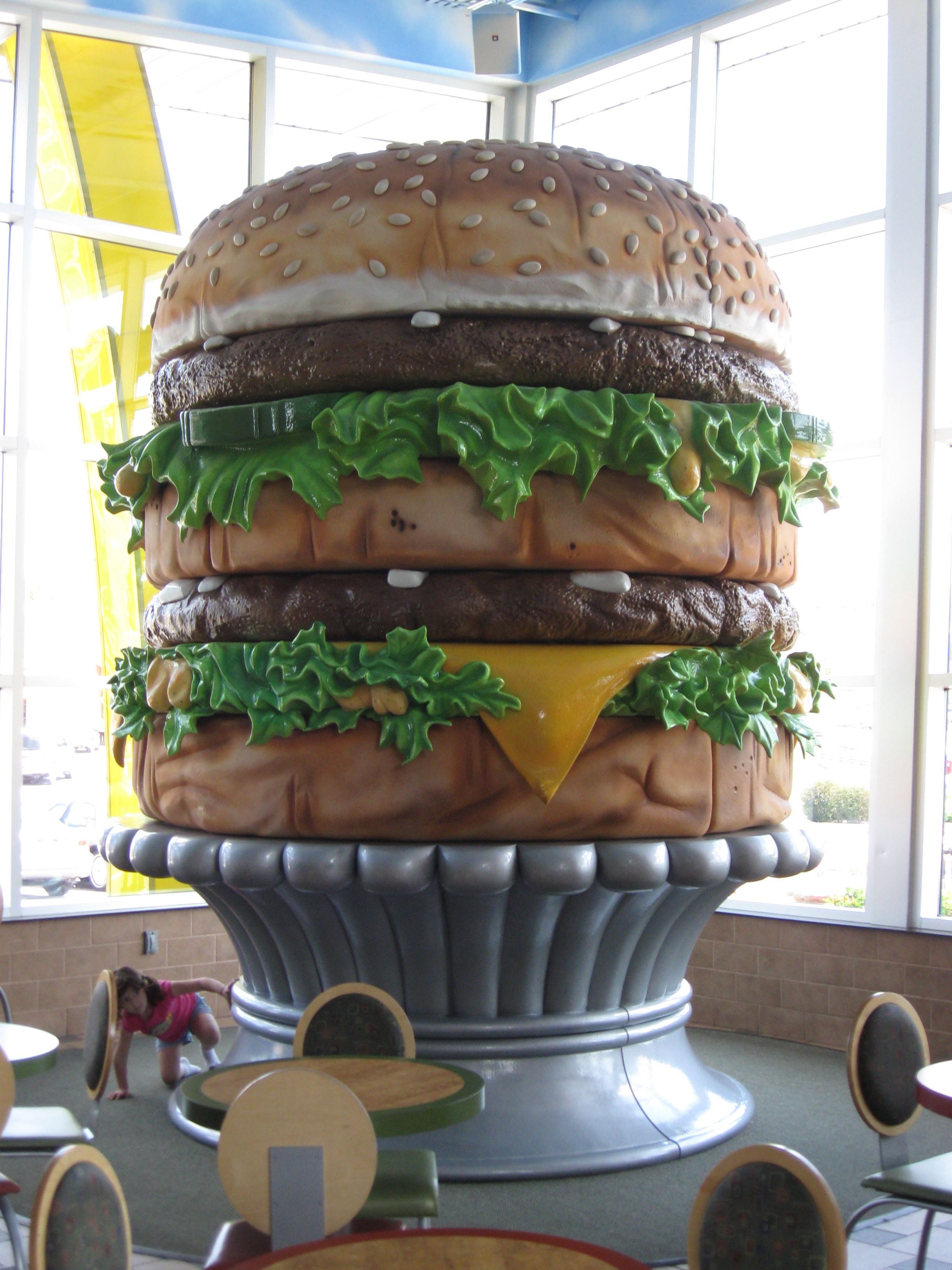 Alan Jalowitz
The World's Largest Big Mac is a statue in the play room at the Big Mac Museum. 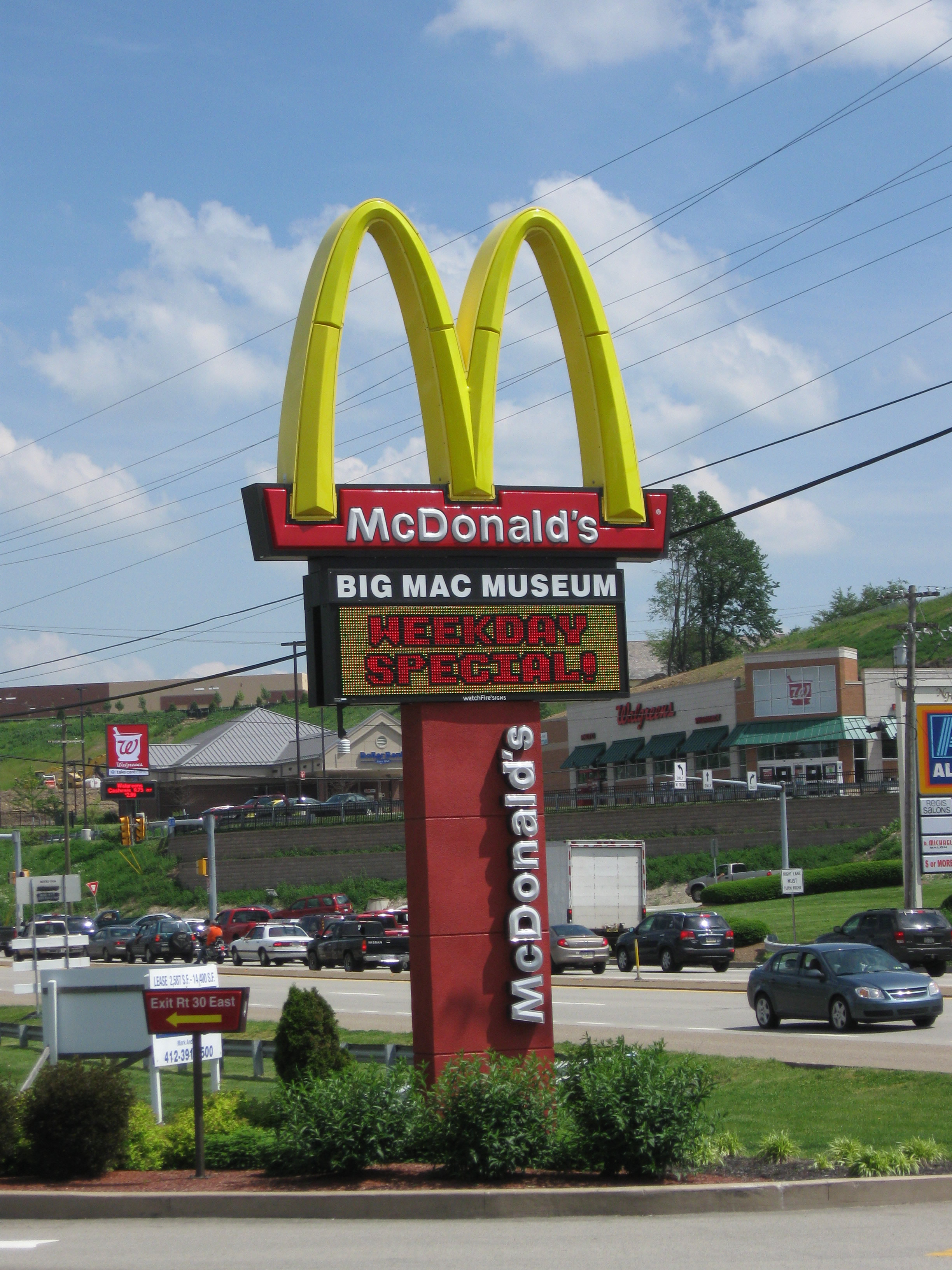 Alan Jalowitz
Slightly different, this sign attracts the hungry AND the curious to the Big Mac Museum.
County:
Fayette
Fall 2009