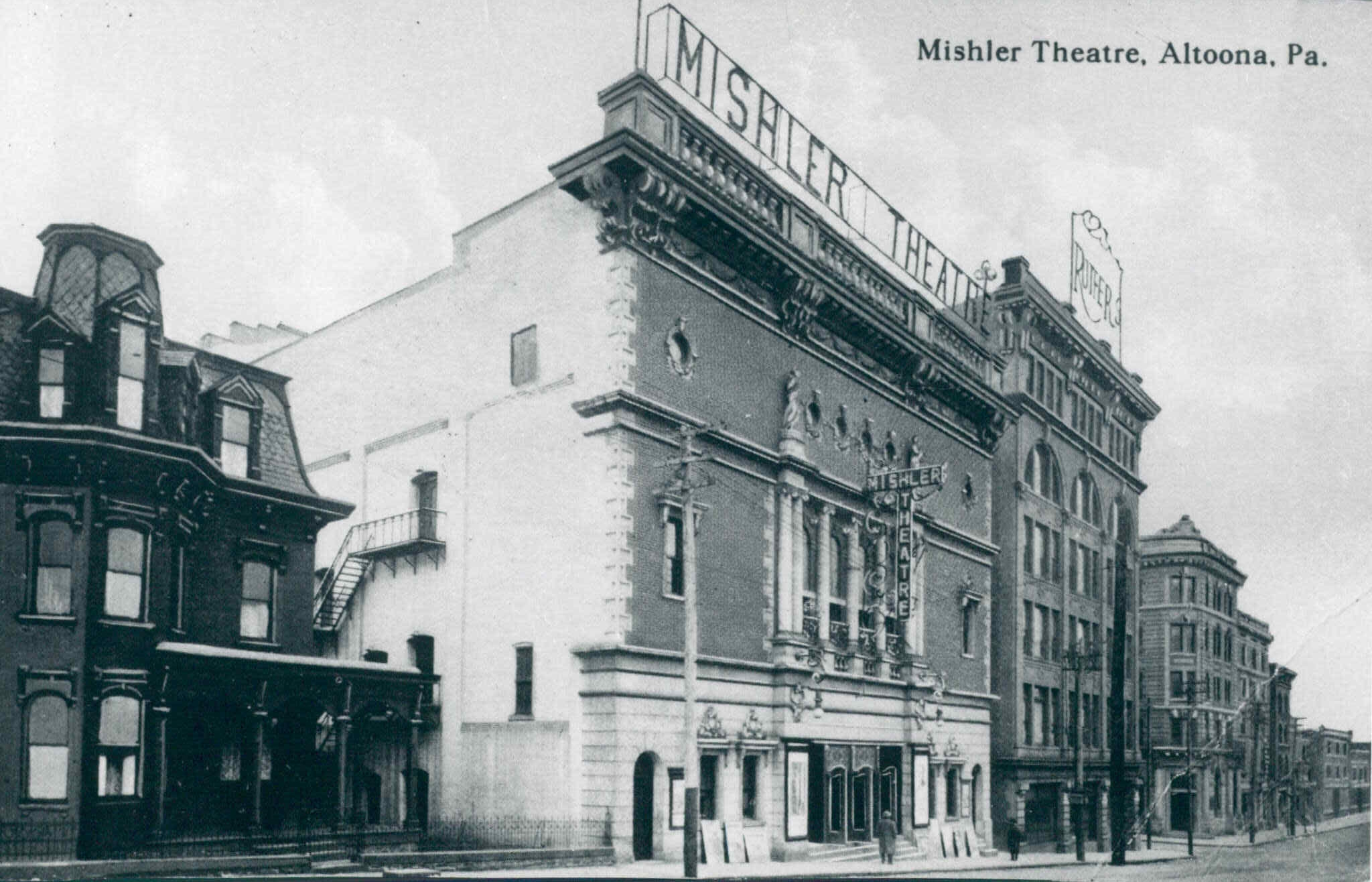 Altoona Community Theatre & BCAF
The Mishler Theatre has been the site of entertainment for generations of Blair County residents.

The faint smell of cigar smoke, the apparition of a familiar man wearing funny hats, restroom sinks mysteriously turning on and off with nobody in sight, and a figure dressed in early 1900’s clothing. These are just a few personal accounts some have recalled to describe their visit to the Mishler Theatre. Isaac Mishler, the theater’s founder, decided not to leave the century-old theater even after his death according to local legend. These paranormal experiences are but one element that makes this historical and culturally rich site in Altoona, Blair County so intriguing.

Constructed in 1906 by architect Albert E. Westover and mastermind Isaac “Doc” Mishler, the Mishler Theatre was just one of many projects in his career in the entertainment industry. Isaac Charles Mishler was born in Lancaster on September 30, 1862. It was there during his youth, he would learn his business ethic. Mishler was the first person employed by Frank W. Woolworth at his first “Five-and-Ten” store where worked into his late teens.

Shortly before his 19th birthday on August 8, 1881, Mishler moved to Altoona, where he worked for the Pennsylvania Railroad for a few years. In his early 20s, he enjoyed the first taste of his own business, opening a successful cigar shop on 11th Avenue in Altoona. The store became a hub for local baseball fans and Mishler, being one of these fans, began promoting professional baseball. He promoted and sponsored teams in the Pennsylvania State League. Altoona’s own baseball team won the state league pennant in 1886. This was an important time in Misher’s life as it can be considered the beginning of his career in the entertainment business. 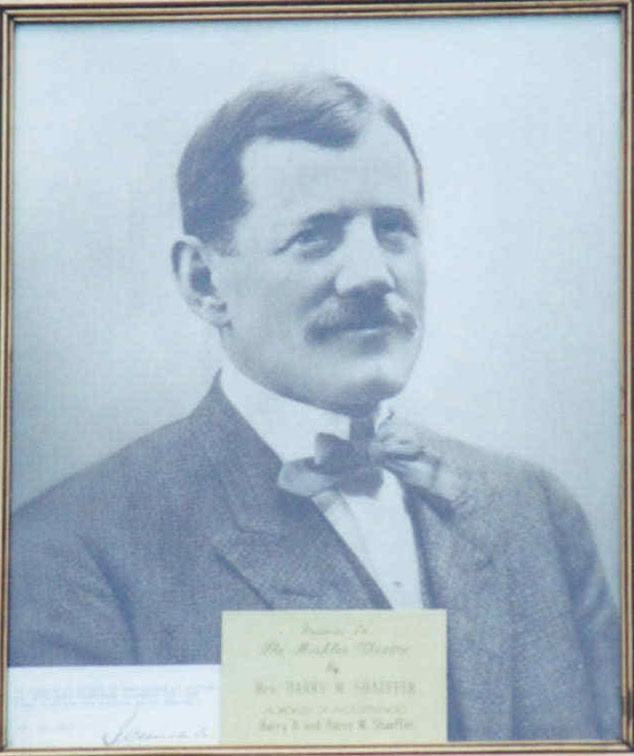 His interest in this industry can not only be credited to his baseball ventures, but can also be stemmed up the family tree to his elder cousin John D. Mishler. During this time, John was an already very successful businessman in the industry having already created “the Mishler Theatre circuit” a few years earlier in 1873. The circuit spanned nine cities across eastern Pennsylvania. John is also widely credited as creating the first modern theatrical circuit in America.

The next major step in Mishler’s entertainment career began in 1893 when he made business partnership with the “Eleventh Avenue Opera House,” a building on the same street as his cigar shop. This partnership soon turned into single ownership when Mishler purchased the property in 1896. Within the next, decade he acquired several more theaters in surrounding areas and soon made plans to create his own. His plan became a reality on February 15, 1906, when the appropriately named “Mishler Theatre” opened its doors.

The theater was best described by Mr. Mishler himself when he made the statement during the theaters inaugural program: “the policy of the New Mishler Theatre is to present high-class standard productions in a perfect manner to audiences safely housed in comfort and pleasing surroundings.” The theater was fully financed by Mishler himself. The venue could seat nearly 2,000 patrons and is still considered an architectural feat with its luxurious, state of the art interior which included air-conditioning via blocks of ice placed underneath the auditorium that ventilated through the floor. The construction also had an eye-catching exterior that was a sight that was sure to draw the attention of the citizens as well as travelers passing through the then flourishing industrial city.

Altoona is city that is well known for its railroads, especially in the early 1900s. The railroad station in Altoona was a major layover point for travelers who were traveling by train. Naturally, the city experienced new people entering and exiting every day. This created a prime business opportunity for Mishler as his newly constructed theater stood one street away from the train station.

The venue became a stop on the then popular vaudeville circuit shortly after its creation. Though located in a small city, the theater hosted performances of many famous names in the entertainment industry at the time including Harry Houdini, John Wayne, W.C. Fields, Sarah Bernhardt, and Al Jolson, just to name a few. These were talents who rarely visited venues in smaller cities. Though the theater enjoyed great success in its infancy, it would not be long before the venue would experience an unfortunate and untimely disaster. 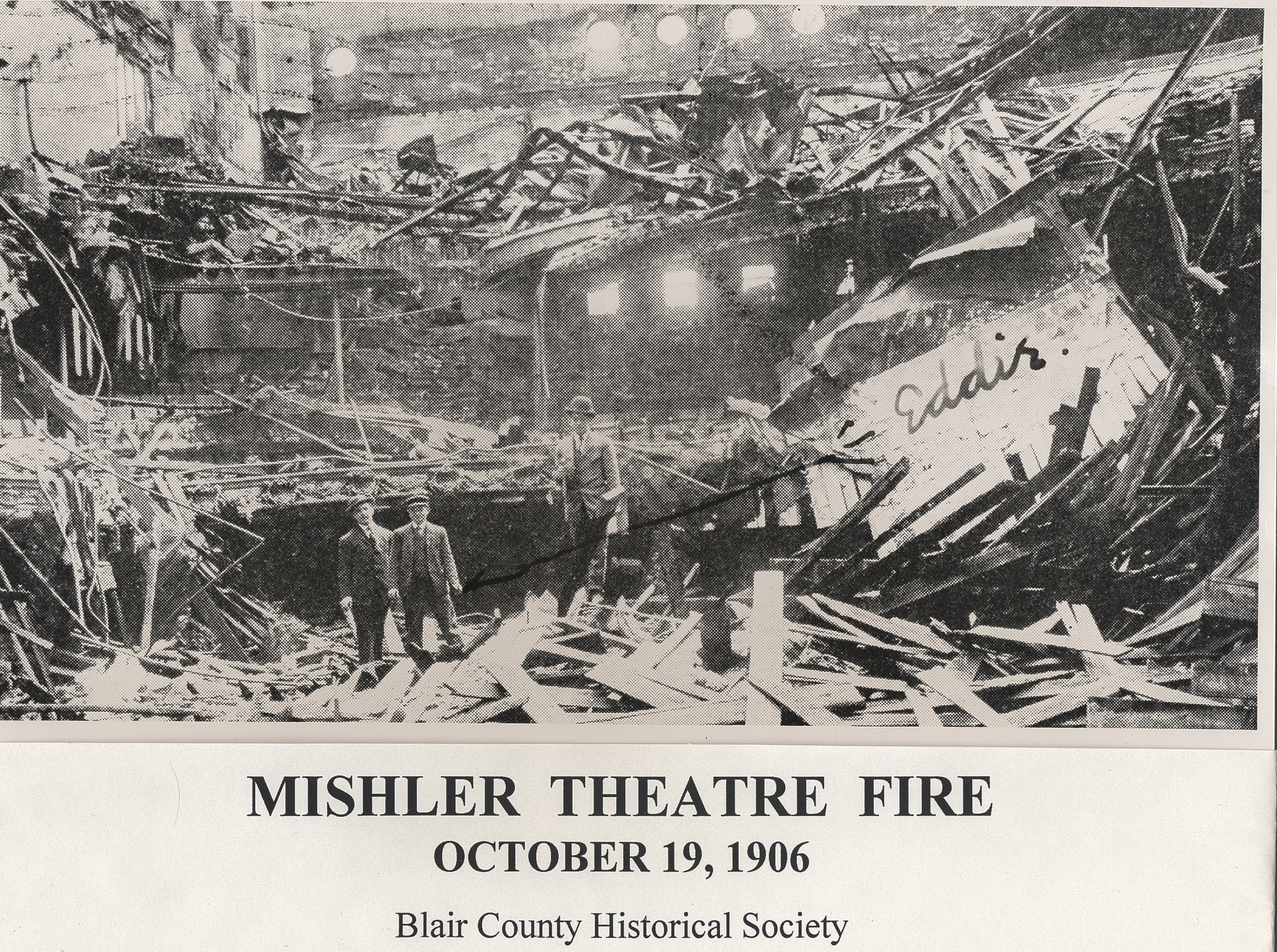 On October 19, 1906, just over eight months after it first opened, the theater was completely destroyed due to a fire in the neighboring furniture building of Oliver Rothert. The building was in ruins with the fire leaving nothing but ashes and debris. Though devastated at this great loss, Isaac Mishler did not hesitate to immediately organize the reconstruction of his masterpiece.

Through insurance claims and more personal finance, the building once again opened its doors exactly three months later on January 19, 1907. The Altoona Times described the event: “Mishler Theatre, phoenix-like, has risen from ashes and is now grander than ever” and “The watchword in work of reconstruction – To be one of the largest, safest, and most beautiful playhouses ever built.” During its reconstruction, Mishler did not stop booking entertainment. He, instead, moved his shows to his other local venue, the Eleventh Avenue Opera House, which stood conveniently a block away from the destroyed theater.

Though the investment to reconstruct had drained much of Mishler’s financial resources, he managed to continue booking big name talent for the next couple of decades and even brought motion pictures to the theater as the new medium slowly stole the spotlight and ended the Vaudeville Era. For the remainder of Mishler’s ownership, the theater mainly ran movies until he sold the building in 1931. Isaac Mishler remained in the entertainment business until he died at the Penn-Alto hotel in his hometown of Lancaster in 1944 after battling a long illness. He was buried in Altoona beside his two former wives. On May 4, 2003, a historical marker was placed outside the Mishler Theatre in Altoona as a memorial to Mishler for his lifetime accomplishments and historical significance. 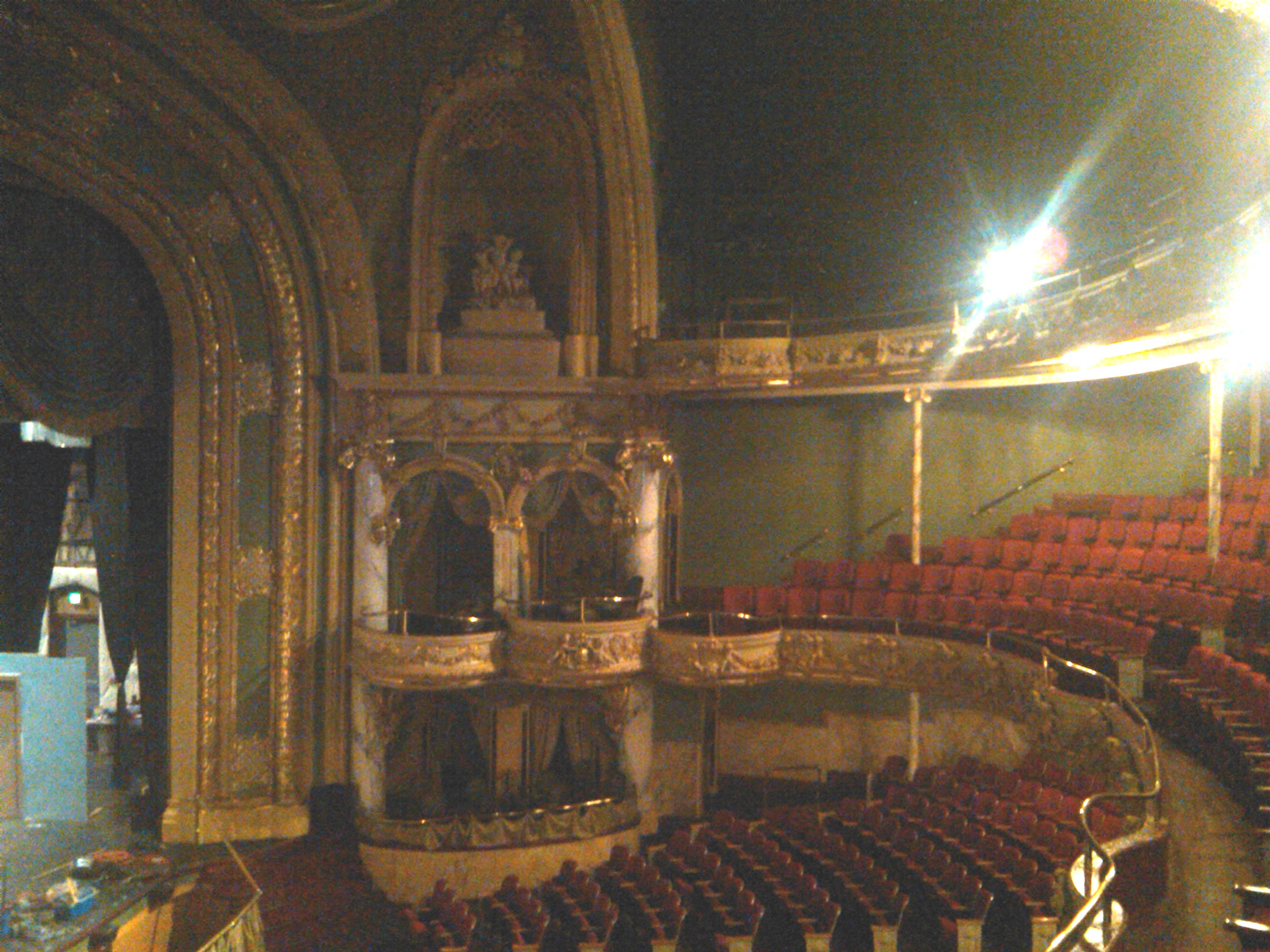 The theater has remained active for the past eight decades despite nearly being demolished in the 60s. During this time the Blair County Arts Foundation rescued the building by buying the property. Since their purchase, they have put a great amount of financial resources into restoring the aging theater. To date, the Foundation has invested over $1 million into an ongoing restoration project. The theater remains in operation today providing a place for local talents and organizations to perform. The entertainment is organized by the Altoona Community Theatre that produces and directs many of the performances held at the Mishler. There are four major live theatre productions performed annually as well as several musical and family events which are enjoyed by over 10,000 patrons every year. The productions are rehearsed and supported a block away from the theater at the former Altoona Elks Lodge the ACT has purchased in 1983. In recent years, many productions have been held at the theatre, including Jekyll & Hyde, Beauty & the Beast, Miracle on 34th Street, and Working: A Musical.

Presently, the theater is not only notable for its historical significance, but has through the past several decades received much attention for its supposed hauntings. The site has become something of a popular haunted attraction for paranormal enthusiasts. It gathers so much attention that it was paid a visited by the cable television show Ghost Hunters. In 2004, the show visited Altoona to visit two reportedly haunted locations: the Mishler Theatre and the Altoona Railroaders Museum. The investigators on the broadcast note that they were informed about which is the popular local legend that Mr. Isaac Mishler’s ghost is often seen walking throughout the theater on the catwalk and near his office with a cigar in his mouth. They, however, come to the conclusion that the site is fact, to their standards, not a haunted one. 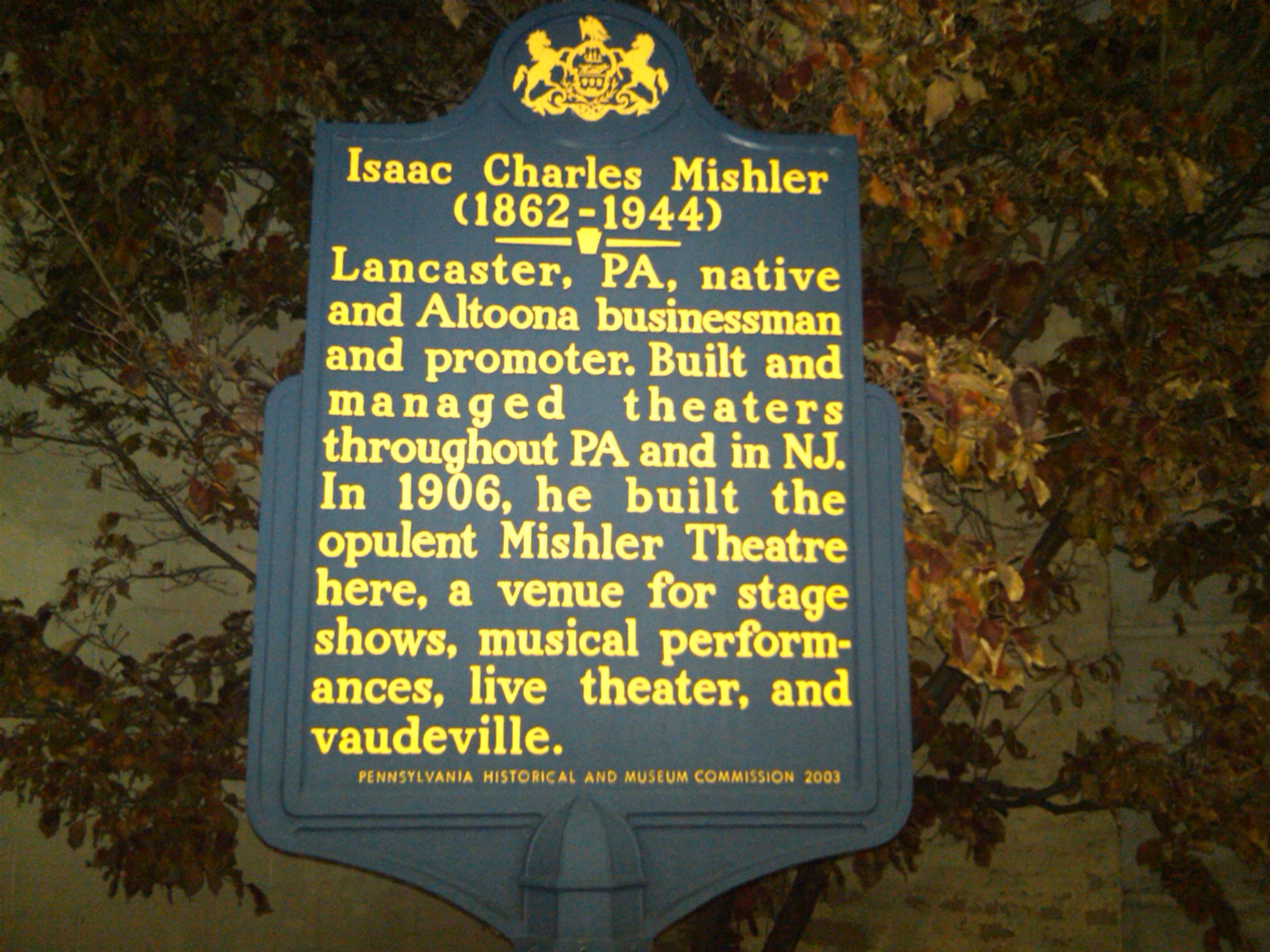 Matthew Zeak
Isaac Charles Mishler has been commemorated with a state historic marker.

The most credible accounts come from Madeleine Letsche, of Altoona, who accompanied her mother, Laura, to the Altoona Historic Theatre. She roamed the theatre while her mother set up lighting and sound equipment for the theatre productions. Starting at the age of two, she became friends with a ghostly figure that she said wore funny hats. The man she befriended would one day wear a floppy hat and the next day would wear a tall, black hat. He told her about the theatre and how pretty she was. As they walked around the theatre, he told her about his love for the theatre and the many productions there.

A few more accounts of these experiences come from employees of the theater, Technical Directors Brian McConnel and Marlene Liszka. McConnel claims to have seen the ghost of Mishler observing him work from the above rafters. During a different encounter, McConnel was hit in the face with water when there was nothing in sight that could have done so. Letsche, a former Technical Director, claims to have seen a woman dressed in 1930s clothing in the women’s restroom, heard sneezes, and while on stage, saw a man who was offstage “looking through a phone book and who didn’t resemble Isaac Mishler.”

Steve Helsel, the operations manager at the Altoona Community Theatre for the last 23 years, also recalls an abnormal experience. “It happened when I was directing Guys and Dolls several years ago” Helsel says. He and his lighting designer Sue Polay were working after hours after one of the final rehearsals to finish some last minute adjustments to the lighting on the set, when something odd occurred in the late hours of the night. He explains: “We were both standing onstage and she explained that she had added two special lights from up in the balcony lighting booms on both sides of the theatre to hit the lead character, Sky Masterson, for his introduction into the song “Luck Be a Lady Tonight.” She said she had put an X of spike tape on the stage floor downstage center to show him where to be standing when he gave his cue line for the song, and then the light board operator could snap on those two lights quickly on the musical cue.” It was during this explanation that Sue stood upon the “X” to show Steve where the actor would be standing when said lights turned on and lit up the position in which she was standing. 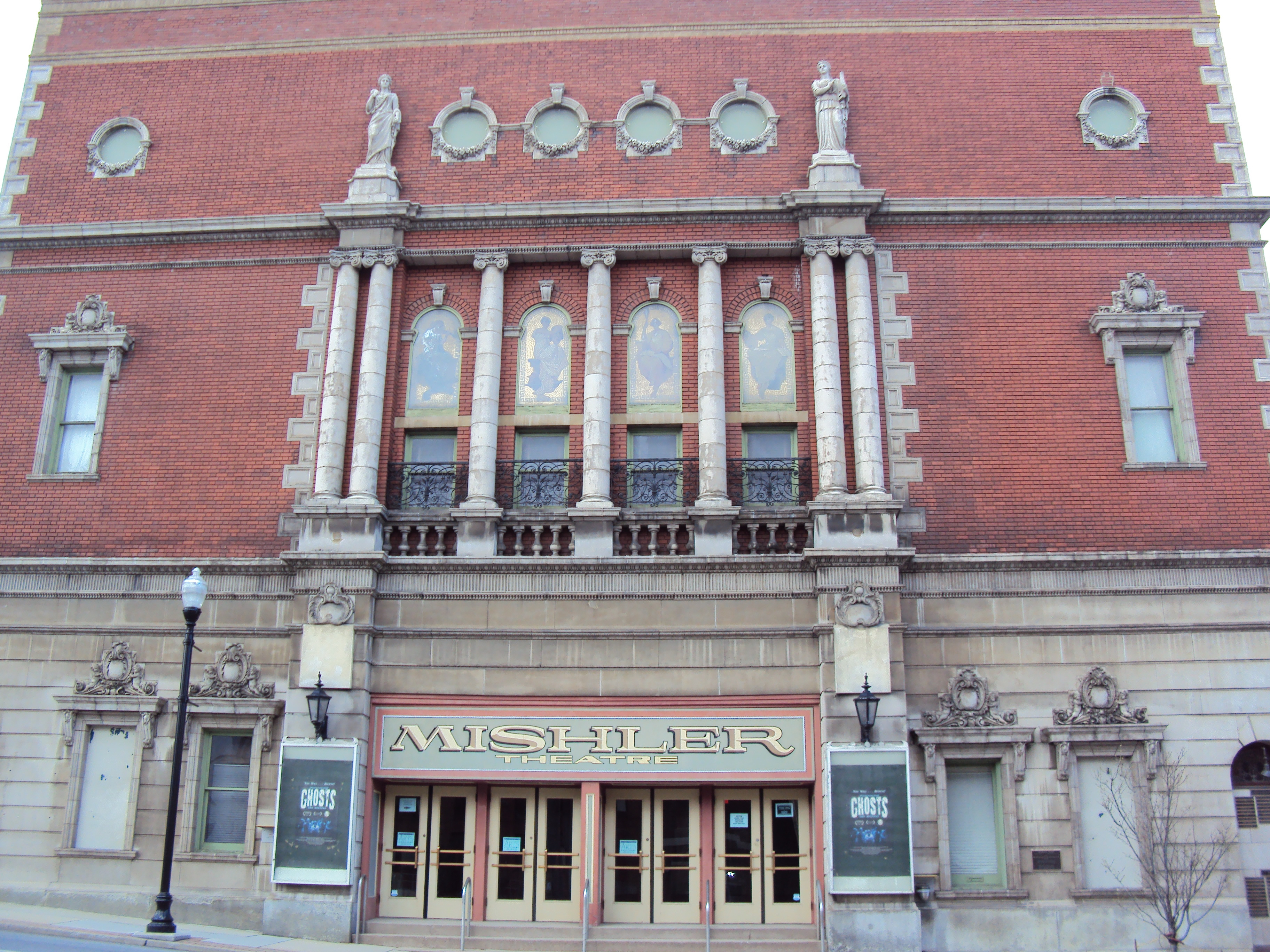 Alyssa Murphy
The Mishler Theatre still keeps bringing in the crowds after over a century.

Helsel continues to explain the startling event: “We both looked at each other, eyes wide open, and Sue said to me ‘who did that’ and I said ‘I don’t know, because there’s nobody else here.’ And Sue said ‘I think we’ve done enough for tonight’ and stepped back off the X and the lights went out. We pretty quickly shut everything down for the night and left the theatre.” Helsel is but one of many who have worked in or around the building that can recall such significant events of mystery which have many guessing whether or not Mr. Mishler has really left his prized landmark.

Although long passed on, Isaac “Doc” Mishler, the remarkably successful businessman from Lancaster has left behind him a legacy and significant history in Blair County. Thanks to the Blair County Arts Foundation, it is still a place where patrons can go and enjoy quality live entertainment while they reminisce about the theater’s exciting history. One may also catch a glimpse of Mr. Mishler himself while they are there. Just remember to look for the man smoking a cigar or wearing a “funny” hat.