More Than Fifteen Minutes of Fame: The Warhol 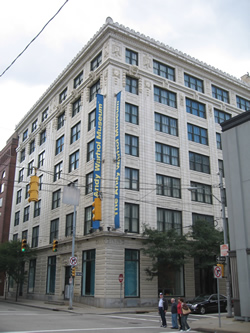 Among Andy Warhol’s most memorable legacies is his prediction that “everyone will be world-famous for fifteen minutes.” With the advent of reality TV and YouTube, average people everywhere receive their share of the spotlight.  Warhol and his work, however, have lasted far past their fifteen-minute expiration date, warranting an enduring tribute in Pittsburgh’s Warhol Museum. Thomas Sokolowski, the museum’s director, finds the Warhol’s location integral to its presentation, saying “I don’t think I ever would have fully understood Andy Warhol without coming to Pittsburgh.”

The Warhol Museum, which opened on May 13, 1994, is situated on Pittsburgh’s North Shore. Located in Warhol’s hometown, the museum, which has since become a “center for the avant-garde,” is an homage to the “most influential American artist of the twentieth century.” The Warhol, one of Pittsburgh’s four Carnegie Museums, houses Warhol’s most famous works along with his most personal collections, in a re-creation of The Factory, the studio where Warhol and his collaborators produced counterculture artwork and film. Warhol’s personality is further reflected in the museum design as Sokolowski observes: “because of the lively nature of Warhol’s life, nothing is static. There’s a continual shifting of works from the collection to different locations to form new associations with other pieces.”  The renovated warehouse that houses the museum includes a 119-seat theater, a library, a coffee shop, and a bookstore. A quarter of the museum’s permanent collection is regularly on display, presented in the chronological order of Warhol’s life and career. This collection cannot be pigeonholed into one category, as the “father of pop art” lent his diverse talents to many trades, including magazine illustrator (The New Yorker, Bazaar and Vogue), magazine owner (Interview), window dresser (Bonwit Teller and I. Miller), commercial illustrator, gossip columnist, filmmaker and fashionista. Jack E. Kightlinger / National Archives
Honored at the White House, Andy Warhol made a tremendous splash in the social whirl of the late 70s.

The first-floor gallery is dedicated to Warhol’s glamorous portraits of celebrities and high society figures. Celebrities like Liz Taylor, Jacqueline Kennedy and Marilyn Monroe, subjects, as well as fans, of Warhol’s unconventional artwork, have their portraits on permanent display in the museum. These portraits, with themes ranging from youth, to beauty, to death, capture the culture of personality that thrived in the 60’s. The celebrity culture associated with drug use, free love, and radical politics was a sign of the anti-institution and anti-consumerist thoughts of the age. Yet Warhol’s blue-collar background and consumerist criticisms are also on display in this gallery, via the portrait of his mother, Julia Warhol, and his own famous self-portrait, painted just a year before his death.

Located directly across from the portrait galleries is the museum’s theater, where visitors can watch 16 mm films produced by Warhol. “It’s the movies that have really been running things in America ever since they were invented,” he once declared. “They show you what to do, how to do it, when to do it, how to feel about it, and how to look how you feel about it.” Warhol’s collaborative efforts are located on the museum’s second floor, while the Archives Study Center, housing Warhol memorabilia, along with mementos from the artist’s early years and personal life, is on the third floor. Among these artifacts are over 600 ‘Time Capsules,” drafts of Warhol’s work, old bills, diaries, family photographs, and issues of Warhol’s magazine, Interview.

The Silver Cloud Room, located on the museum’s fourth floor, is its most popular exhibit. Originally created for “a 1996 exhibition at the Leo Castelli Gallery, Warhol created an environment that included one room filled with Silver Clouds, helium filled balloons which moved with the air currents.” Warhol created Silver Clouds with the help of Billy Kuver, an engineer interested in combining art with technology. With the Silver Cloud Room, Warhol sought to create a simple, happy environment that would also “challenge traditional expectations by mingling with and touching the viewer.” The vision for the Silver Cloud Room coincides with the love hate relationship Warhol had with the City of Angels. “I love Los Angeles,” he declared. “I love Hollywood. They’re beautiful. Everybody’s plastic, but I love plastic. I want to be plastic.”

Commonwealth Media Services / VisitPA.com
Warhol frequently made himself the subject of his artwork.

The fifth floor showcases Warhol’s more commercial side; samples of his contributions to New York department stores, window designs, and early sketches from the 1950’s are displayed. Also on display are popular commercial images, such as Coca Cola (1960), Telephone (1960), and Campbell’s Soup cans (1960-1962), which the artist blew up and later painted himself. “Once you ‘got’ Pop, you could never see a sign again the same way again. And once you thought Pop, you could never see America the same way again,” Warhol said of his transition into pop art. He would frequently mimic pop culture figures and imagery in his art, revealing America’s obsession with consumerism as well as the influence of the media on society. “Warhol had a keen perception of being able to single out those objects in American culture that would have iconic statues,” said John Smith, assistant director of collections at the Warhol. “It’s a testament to how perceptive Warhol was both visually and intellectually in his choice of subject matter. On of the reasons he loved the idea of Coke was because it doesn’t matter how rich or poor you are, no one can get a better Coca-Cola than anyone else…Whether you’re the average person on the street or Elizabeth Taylor you still drink the same Coke.”

Andy Warhol possessed the unique skill of turning both everyday objects such as Campbell’s soup cans and Coke bottles, as well as famous Hollywood stars like Marilyn Monroe and Liz Taylor, into art forms. Warhol’s work simultaneously helped to scrape away the pedestals of pop culture icons and to bring art to the average person. Warhol believed he left all of himself on display as well, stating, “if you want to know all about Andy Warhol just look at the surface of my paintings and films and me, and there I am. There’s nothing behind it.” Luckily for art enthusiasts everywhere, the opportunity to learn about the artist through his art is waiting at Pittsburgh’s Warhol Museum.