The "Old Falling Apart" That Held a Fleet Together 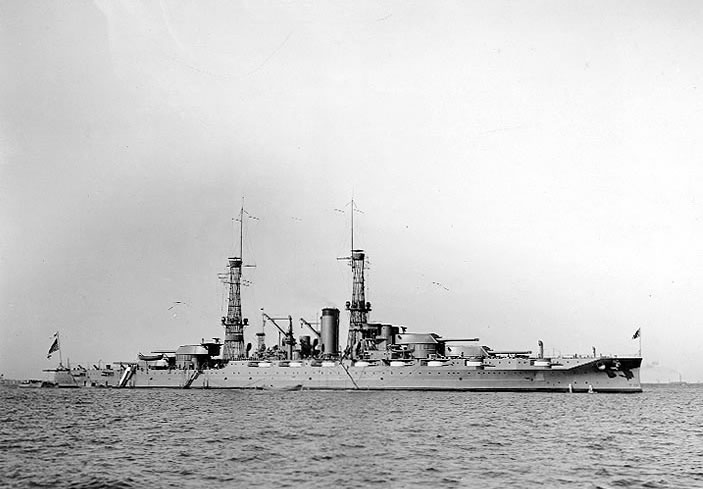 Twenty thousand people gathered and cheered at the docks of the Newport News Shipbuilding Company on the morning of March 16, 1915. Trains from all over Pennsylvania, Maryland and Virginia arrived and flooded the town with spectators. The event: the launching of the world’s largest battleship, the U.S.S. Pennsylvania.

The U.S.S. Pennsylvania (BB 38) was authorized by Congress on August 22, 1912 and commissioned for service just shy of four years later on June 12, 1916. This 31,400-ton battleship was built by the Newport News Shipbuilding and Dry Docking Company in Virginia, and was the lead ship in a class of two of this size. The other ship in the class was the famous U.S.S. Arizona, made in the New York Navy Yard in Brooklyn, NY.

Although she was ready for battle during WWI, the U.S.S. Pennsylvania was never used on the front lines because she was seen as “too modern.” She was one of two ships in the fleet that was oil-burning, the other being the U.S.S. Nevada. Because there were not enough oil tankers to send to the British Isles, the Allied Forces used only coal-burning ships to fight the German Navy, thus excluding the U.S.S. Pennsylvania from battle. In 1921, she became the flagship of the newly created battle fleet and led this fleet for the next eight years on patrols and maneuvers through the Atlantic, Caribbean and the Pacific. From 1929 to 1931, the U.S.S. Pennsylvania was stationed at the Philadelphia Navy Yard while she underwent modernization. Two tripod masts replaced the cage masts that were previously on the ship and her combat systems were improved. 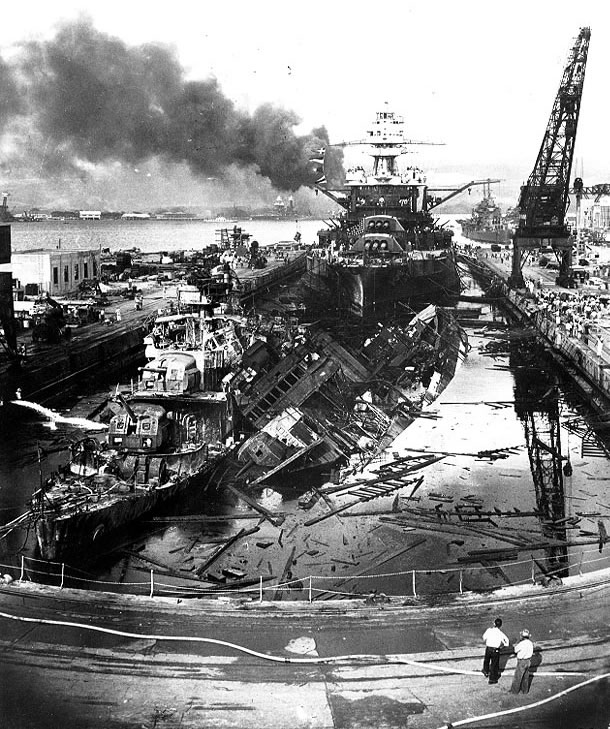 Harold Fawcett / U.S. Naval Historical Center
The U.S.S. Pennsylvania suffered little damage during the Japanese attack on Pearl Harbor; her sister ship, the U.S.S. Arizona, was not so fortunate.

The U.S.S. Pennsylvania was stationed at Pearl Harbor in 1941 during the infamous attack by the Japanese. On the morning of December 7, she was sitting in dry-dock in the navy yard. She was one of the first ships to open fire on the Japanese and it is said the 50 caliber crew began firing even before the General Quarters Alarm was sounded. (“General Quarters” is the term used aboard a ship to tell the crew to man their battle stations.) That ship suffered minimal damage during the attack due to being hit by only one bomb. The same was not the case for her sister ship, the U.S.S. Arizona. This ship was hit by eight bombs and one torpedo, causing it to explode and sink. 1,177 of her crewman were killed on that day. The U.S.S. Pennsylvania being in dry-dock during the attack is one of the main reasons it suffered so little damage. After the attack, she underwent another modernization which included adding new radar and many anti-aircraft guns.

According to the war history information on the battleship’s website, the U.S.S. Pennsylvania saw a great deal of action throughout the rest World War II. It was active in many naval campaigns including the North Pacific Campaign, the Gilberts and Marshalls, the Marianas Campaigns, the Carolines, the Philippines and Okinawa. At Okinawa, she was hit by an aircraft torpedo, killing twenty men and injuring ten others. This was the most significant damage she endured throughout the war and the ship had to be towed by two tugboats to Apra Harbor, Guam. Here, the torpedo hole was patched by a large sheet of steel and she was sent back to the U.S. under her own power. She returned to the Puget Sound Navy Yard in Washington State on October 24, 1945, having traveled nearly 150,000 total miles since Pearl Harbor. Although not meant as an insult, she was known as “old falling apart” amongst her crew because of her age and great use during the war. She was also the last major Navy ship to be hit by enemy fire during WWII. 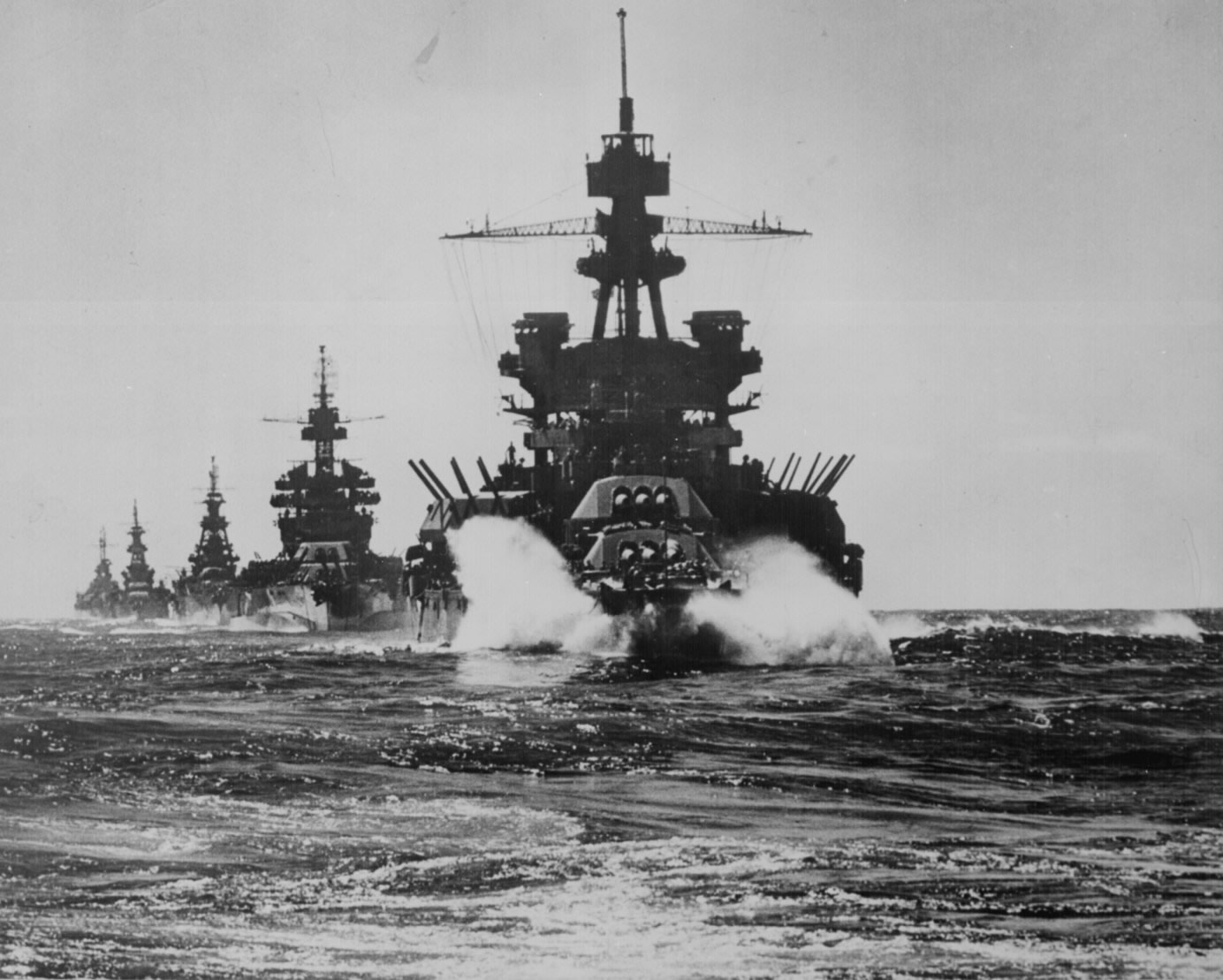 National Archives
The U.S.S. Pennsylvania leads several other battleships in formation in January 1945.

The U.S.S. Pennsylvania earned eight battle stars for her efforts in WWII. She received stars for successfully executing operations at Pearl Harbor, the Aleutians Operation, the Gilbert Islands, the Marshall Islands, the Marianas Operation, the Western Caroline Islands, the Leyte Operation and the Luzon Operation. She was also awarded a Navy Unit Commendation which specified “For outstanding heroism in action against enemy Japanese forces” as the reason for the commendation.

Due to the damage endured at Okinawa and the age of the ship, the U.S.S. Pennsylvania was not kept as part of the post-war fleet. Instead, she was only repaired enough to be used for target practice. The most notable test she took part in was the Bikini atomic bomb test in July of 1946 where atomic weapons were fired at her for practice. The fact that she did not sink after these impacts is a testament to the ship’s strength. After the test, she was taken to Kwajalein (an island in the South Pacific) where studies of residual radioactivity were done. She was decommissioned on August 29, 1946 and was scuttled (sunk on purpose) at sea off the island of Kwajalein on February 10, 1948. 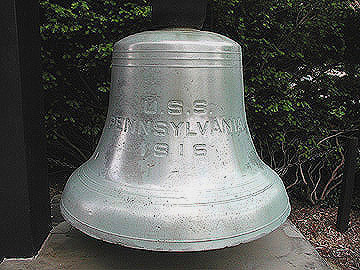 Pieces of this great battleship can be found in various locations around Pennsylvania. On October 12, 1956, the Pennsylvania State University received the U.S.S. Pennsylvania’s bell to be kept as a memorial to the battleship. It was given on the basis of a “permanent loan” by the Navy Department and can still be found on campus to this day. The original location of the bell was in front of the Hetzel Union Building but it has since been relocated to out front of the Wagner Building, home to the university’s ROTC programs. Weighing about a half of a ton, this bell is an impressive feature on campus.

The guns of the U.S.S. Pennsylvania were recently acquired by the Pennsylvania Military Museum in Boalsburg, Centre County. Since 1945, when the battleship’s guns were removed, the two guns that currently sit out front of the military museum sat in a storage facility in Dahlgren, VA. The guns were removed and placed in storage because the ship was stripped of any equipment that was deemed valuable and/or reusable before being used for nuclear testing. On May 20, 2009, the two 54-foot, 66-ton steel barrels made the journey from Virginia to Boalsburg, PA, where they are displayed today. Two tractor-trailers with police escorts were necessary for the transport. This concluded a ten year effort by the museum to bring the guns to be displayed in Boalsburg.