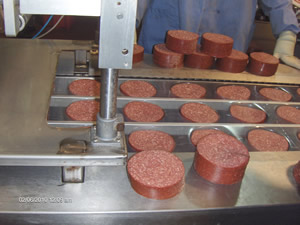 Lauren Reed
A signature Pennsylvania product, lebanon bologna is made by only a few companies in the Commonwealth.

When someone says, “Famous Pennsylvania foods;” what comes to mind? Most can come up with a list that includes the hoagie, Birch beer, Hershey’s Chocolate, Scrapple, Shoofly pie, cream cheese, and soft pretzels. One thing commonly left off the list, however, is a famous sausage and lunchmeat that originated in Lebanon County, Pennsylvania—Lebanon Bologna. Satisfying consumers for over 100 years, this bologna can be found in an assortment of savory flavors ranging from tangy to sweet. According to Stephanie Shapiro of The Baltimore Sun, this “cold cut remains a staple across a wide swath of the state and in areas around the country.”

Crafted and made famous by the Pennsylvania Dutch, the process of making Lebanon Bologna is unique. Although many methods of processing have been modernized by machines, some Old-World butchering, curing, and sausage-making skills from the Pennsylvania tradition are still used today. Ron Fouche, Director of Community and Government Relations and Quality Control for Seltzer’s Smokehouse Meats believes that the Lebanon Bologna process began over 100 years ago when farmers had old cows that they could not use for milk anymore. Farmers would take the skeletal meat (or meat off the bone) and salt it (to break it down) to create a lean product to use for bologna. Although Old-World butchering has been modified since the first days of Lebanon Bologna, we find that companies today still produce the signature bologna in similar ways. 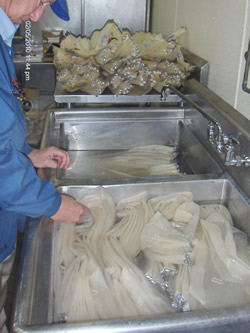 The beef is ground, mixed with spices and sugar, and then sent to a meat processing plant. In large bins, the meat is stored in refrigerated areas and separated by the type of bologna it will become. When ready for processing, the meat from the bins is dumped into a rotating machine that finely grinds and softens the beef and pushes it through a metal tube. The tube separates the meat as either edible or inedible and detects for metal. The edible meat is then sent through a tube and pushed into individual, perforated muslin casings. After the meat is in the casings, it is put in to yet another netted material required for smoking. The un-smoked bologna is then taken to a smokehouse. Each bologna is hung by the netting in the ceiling portion of the smokehouse.  Once the smokehouse is filled, the door is shut and the hanging bolognas are ready to be smoked.

Companies that produce Lebanon Bologna have minute differences in their production methods. While Seltzer’s Smokehouse Meats adds potassium nitrate to its meat and spice mixture, The Daniel Weaver Company of Lebanon, Pennsylvania, for example, adds a starter culture. Despite their ingredient differences, each uses their various admixtures for the same reason—to lower the pH level of the meat mixture. This gives the bologna its distinct, tangy flavor and makes it last longer.  Another difference between companies is the way in which the bologna is smoked. Seltzer’s uses old-fashioned smokehouses, while Weaver’s and other companies use stainless steel smokehouses.

Seltzer’s old-fashioned smokehouses employ the traditional method of smoking bologna. They are lined with fire bricks and fueled by a combination of hard wood fire and steam. Ron Fouche notes that the fire pit is “nearly the size of a coffin” and located just under the ground. The old-fashioned pit smokehouses reach nearly 122 degrees and continuously smoke for 40 to 60 hours as they are tended to by Seltzer’s employees. This allows the net on the bologna to absorb moisture and let the juices soak in through the casing, creating a flavorful, succulent bologna. 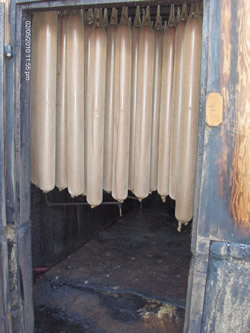 Lauren Reed
Lebanon bologna is often smoked in either wood or stainless steel smokers to impart flavor and to cook the meat.

Using stainless steel smokehouses is yet another way of smoking bologna. After the bologna is hung by the netting, the automated smokehouse is then turned on. Rather than using a fire pit inside of the smokehouse, companies like Weaver’s use a smoke generator. Before reaching the bologna itself, the smoke from the generator first filters through water, which acts as a buffer to produce a cleaner smoke. The generator is able to run consistently for an unlimited amount of hours and has the capacity to make the bologna as smoky as desired.

After the smoking process is complete, the bolognas are taken from the smokehouses and tested to ensure that they are at the proper pH level (4.5-5pH). The bolognas are then marked and dated to guarantee quality control and put in large refrigerators for storage. From here they can be packaged, sliced, boxed and shipped to locations all over the United States.

Lebanon County is the home of Lebanon Bologna. The area itself was settled by many German immigrant farmers who lived on excellent crop-growing land. According to Christine Sholly in her master’s thesis Manufacturing a Tradition: How a Pennsylvania German Sausage Became Commodified in Lebanon, Pennsylvania, “Early accounts of the German settlers indicate they developed a greater dependence on meat in their diets than what they had been used to in their homeland.” This was due to the great amount of time they had to spend in the fields tending to their crops. Among their crops, almost every farmer raised cattle and pigs, mostly to satisfy their meat dependence. Each year, those living in the area would gather together for a butchering day, where farmers would butcher and prepare meat for the upcoming year. Many of the farmers liked to prepare sausage and bologna by salting, pickling, or smoking them because of the long-lasting nature of these meats. 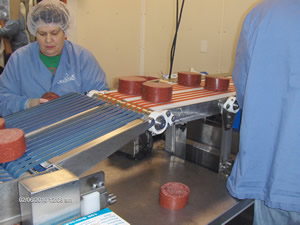 Lauren Reed
Packages of one pound and other quantities of lebanon bologna are packaged on assembly lines like this one at Seltzer's.

The preservation of foods, especially of meats, was essential to farmers in times before modern inventions such as the refrigerator and freezer. Farmers needed a meat that could withstand the heat of the summer and last throughout the year. According to Jerry Landuyt, Manager of Weaver’s Famous Lebanon Bologna, they found that by smoking the meat and hanging it in their attic where it was dry, they could remove enough moisture that nothing would grow in it. This meat lasted so well that even if mold grew on the outside, Jerry says, “You could scrape it off and still be able to eat the meat on the inside.”

This is where the science of food meets tradition. The pH level is an important factor in explaining why farmers didn’t need to store their sausage or bologna in a cool area. The typical pH level of bologna is between 4.5 and 5 and this can be categorized as acidic. Bacteria tends to survive better in more alkaline environments (ones with pH levels that are above a 7), so one of the main ways to preserve food is to control its pH level. Farmers used pickling or smoking methods, since they create an acidic environment. Another way to prevent bacterial growth is to remove moisture. Bacteria need a certain moisture content to grow. By hanging bologna in a dry attic, the moisture will evaporate from the bologna and create an unappealing environment for bacteria growth.

So, how did the name Lebanon Bologna come about? It is now known that “Lebanon Bologna” originated before its primary production area was named Lebanon County; but, the coining of the name has been a source of debate throughout its long history. Because there were so many Lebanon Bologna makers around the time of its origin, the answer to this question still remains unclear. Some say George T. Brooks coined the name when he produced Brooks’ Original Lebanon Bologna in 1872. Other early butchers claim to be the “original” as well. 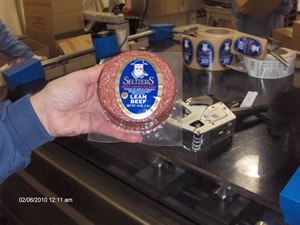 Lauren Reed
A pound of Lebanon Bologna is ready for sale.

By the early 19th Century, notes Christine Sholly, nearly a dozen bologna manufacturers were in business. Figures such as George T. Brooks, who made Brooks’ Original Lebanon Bologna, Conrad Gerhart, Robert Eby of the Eby Bologna Company, Daniel Weaver of the Daniel Weaver Company, Daniel Baum of Baum’s Lebanon Bologna and Harvey Seltzer of Seltzer’s Smokehouse Meats all produced Lebanon Bologna. Many of these businesses prospered in their day, as they all competed to make the best bologna. Now, over 100 years later, only four competitors remain: Alderfer’s of Hollysville; Kunzler’s of Lancaster; Seltzer’s; and Weaver’s of Lebanon County.

Lebanon Bologna lovers everywhere are coming up with new and interesting ways to eat their bologna: rolled with cream cheese in the middle; grilled on the barbeque; as a finger food on a bologna and cheese tray; wrapped inside a crescent roll; or simply on a sandwich. Aficionados just can’t get enough. Companies like Seltzer’s ship over 125,000 pounds of bologna weekly to local stores and locations around the country. Lebanon Bologna has become so ingrained in the culture of Lebanon County that residents even drop a bologna during the countdown to the New Year. According to PennLive.com, a “12-foot long bologna weighing nearly 150 pounds” made by the Daniel Weaver Company is dropped in Lebanon on New Year’s Eve. Local manufacturers refute the 150 pound weight, insisting the bologna was, rather, a whopping 200 pounds. After the New Year’s celebration, the bologna is then donated to a non-profit organization and shared with many.

Whether it’s called Lebanon Bologna or Summer Sausage, eaten with cream cheese or on a sandwich, or made by Seltzer’s or Weaver’s, Alderfer’s or Kunzler’s, lebanon bologna and its original flavor will remain a Pennsylvania tradition for years to come.