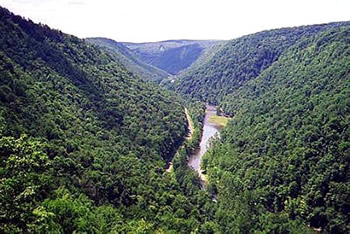 The famous Grand Canyon in Arizona has literally carved a place for itself in tourism history, but Wellsboro, Pennsylvania has its own "Grand Canyon" that attracts thousands of tourists each year.

It is Pine Creek Gorge, also known as "Pennsylvania's Grand Canyon." The canyon starts in Ansonia in Tioga County near Wellsboro, at points dipping more than 1,000 feet, and continues along U.S. Route 6 for approximately 50 miles to Jersey Shore in Lycoming County.

Twenty two thousand years ago Pine Creek had a northeasterly flow until the Laurentide Continental Glacier, which covered most of North America, dammed Pine Creek. This forced the river to start flowing in a southerly direction. Eventually the glacier started to melt and the massive amount of water combined with thousands of years of erosion, enabled the river to sculpt what is known today as Pennsylvania's Grand Canyon.

Unlike the Grand Canyon in the desert, Pennsylvania's Grand Canyon is surrounded by a million acres of forest. The forest used to be home to American Indian groups who were later forced to leave their homes by the construction of a railroad and by substantial deforestation by English settlers.

Spencer Kraybill wrote in his book Pennsylvania's Pine Creek Valley and Pioneer Families that the Seneca Indians named Pine Creek, "Tiadaghton." However the white settlers thought the creek was Lycoming Creek, several miles to the east. Due to the large number of pine trees in the area, the settlers named it Pine Creek. Shortly after their arrival, the white settlers started a deforestation process that took away not only the homes of the wildlife but also those of the Indians. Then a railroad was built through the canyon, where sparks from the trains would ignite the bark and cause many forest fires, contributing to the loss of natural habitat.

James G. Carn wrote a poem in 1973 about the struggles of the Seneca Indians, "Indian Echo: The Lost Voice of the Tiadaghton:”

Here where the mighty mountains race upward toward the sky
This is where we lived and now beneath them lie
Campfires once flickered along the water's edge
And great warriors stood upon each lofty mountain ledge
Canoes once shot the rifles upon the water's wrath
Before the railroad came and carved its sweeping path...
Down the awesome gorge, Red Jacket often passed
Doing all he could to make the history last... 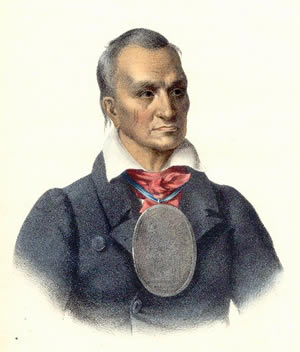 He expressed in the poem the heroic efforts of Red Jacket, the Seneca Chief, to preserve the Indian homeland. The Seneca Indians used Pine Creek and the walking paths along it for hundreds of years, well into the 1800s. The path provided a connection between the Great Shamokin Path and the Iroquois settlement along the Genesee River, the website for Bikekinetix, a comprehensive online guide about mountain biking and biking trails, said. The construction of the railroad prevented the Seneca from using the path. Chief Red Jacket, tried to save the trail, but was unsuccessful. Also continuous deforestation took away the normal eco-system of the forest, further irritating the Indians. Decades later an effort was made to reverse the damage on the wildlife in the area.

During that period, the wildlife in the forest began a rapid decline. The cutting of lumber for via railroad to the tanneries contributed largely to the decline. Also, forest fires and extensive hunting of animals added to the harm of the forest. To highlight the importance of the surroundings, author Chuck Dillon wrote in his book, Short Hikes in Pennsylvania's Grand Canyon: "There is more to a forest than just trees—there is a complex inter-related system of animal and plant communities that are intimately related to the physical environment." Eventually conservationists became concerned and in the 1900's native wildlife such as the white-tailed deer, beaver, and elk were reintroduced to the area. More recently, in 1983, river otters were reintroduced and bald eagles began nesting in the area in the late 1980's.

The Jersey Shore, Pine Creek and Buffalo Railway was built in 1883. The trains mainly transported coal to New York and Hemlock bark to tanneries in the region to make leather. Slate Run and Cammal in Lycoming County and Tiadaghton in Tioga County, were the final destinations for much of the wood during the 1880s and 90s. In fact, during the 1880s, nearby Williamsport was the lumber capital of the world. At its peak, the railroad saw a total of 7 million tons of freight and three passenger trains pass between Wellsboro Junction and Williamsport. The railroad continued to serve as a popular form of transportation until October 7, 1988 when the last train traveled the track. The tracks have since been cleared and a 62-mile track is now part of the several railtrails in Pennsylvania that provide tourists with the opportunity to bike or hike along historic routes.

The past 100 years have brought re-growth of the forest. For two weeks in autumn, the forest is alive with an earthy rainbow of colors as tourists flock to the see the fall foliage. Flashes of bright red, orange, yellow and purple stretch as far as the eye can see. "That other Grand Canyon may be deeper, but come autumn, it can't match the spectacular explosion of color that lines the walls of Pine Creek Gorge..." Travel and Tourism for Pennsylvania boasted. Therefore, it may not be surprising that three fourths of all tourists come to the Gorge during the two weeks when the foliage is at its most vibrant.

Leonard Harrison and Colton Point State Parks are located at the northern edge of the canyon. Colton Point is at the western rim and Leonard Harrison at the eastern rim. Both parks have scenic vistas from which tourists can experience breathtaking views. Leonard Harrison's overlooks offer the best views of the canyon, the Pennsylvania Department of Conservation and Natural Resources said. The drive to Colton Point State Park offers better views of the fall foliage, the Department said. The parks offer an easy-access pass for the less adventurous (and less physically fit) of travelers to see the canyon and surrounding forest comfortably.

Thousands of people also make use of the more than 50 hiking trails that are located within the parks and surrounding areas. To get a better glimpse of the natural beauty of the gorge, hiking trails are provided for which thousands of people flock every year to spend perhaps a few hours or a few days immersing wholly into a world untouched by modern civilization. Ben Cramer, an outdoor enthusiast and freelance writer, wrote, "The physically demanding, yet scenically tremendous, Black Forest Trail charges through and above Pine Creek Gorge for 42 miles. This well-maintained backpacking trail climbs into and out of the chasm multiple times and with great difficulty, but with an incredible solitude and beauty that really reinforce your love for the Pennsylvania outdoors." Another popular hiker's destination is The West Rim Trail that winds some 50 miles right into the canyon. It is also possible to hike the entire expanse of the canyon, using the Turkey Path Trail, arguably the most arduous trail. Luckily benches sprinkle the path for short breaks. For the inexperienced hiker, the abandoned railroad bed offers a flat hike. 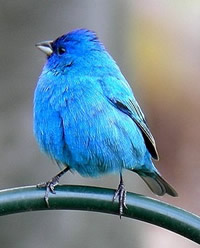 There is more to Pennsylvania's Grand Canyon than the remarkable fall foliage or hiking trails. Cramer wrote, "During a recent four-day period of adventure, I climbed thousands of feet of rugged hillsides, got capsized by river rapids, sat under a bald eagle for several minutes, and camped through a chilly and starry night. And it was all worth it." Pine Creek Gorge has churning rapids for the water lovers as well as cascading waterfalls. A bird watchers paradise, the forest houses a variety of birds such as red-winged black birds, orioles, indigo buntings, cliff swallows, and common yellowthroats. It is also a hunter's dream, offering anything from rabbits and pheasants to deer and turkey. For equestrian lovers, there are day-long horseback trips and during the winter months, skiing is available. Also, private airplane businesses in the area give aerial tours of Pine Creek Gorge.

Pine Creek Gorge is said to be "one of the last and most extensive wilderness regions between Chicago and New York." No wonder so many people travel to it every year. With the onset of 80-hour weeks and loss of outdoor excursions, Pennsylvania's Grand Canyon offers people of all ages a moment of pure relaxation completely void of modern disturbances. Chuck Dillon wrote in Short Hikes in Pennsylvania's Grand Canyon, "The Grand Canyon of Pennsylvania—Pine Creek Gorge—to many the name itself is new. To others the name is limited to a few overlooks from Leonard Harrison to Colton Point State Parks. To most, the area remains a mystery." Although an unknown destination to most Pennsylvanians, visiting Pine Creek Gorge might just be next year's vacation spot.