By Antonio B. Wood, supplemented by Claire J. Woods 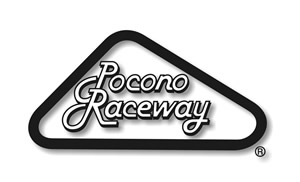 motorsportsforum.com
The Pocono Raceway hosts two major races each year: the Pocono 500 and the Pennsylvania 500.

The Pocono Mountain area of Pennsylvania and its surrounding communities have long been accustomed to tourists. But since 1971, many fans have been visiting this area of Pennsylvania in order to witness and experience a special two and a half mile tri-oval track that has become known to NASCAR fans the “Tricky Triangle.” The Pocono Raceway has been attracting stock car racing fans to Long Pond, Monroe County for over three decades since NASCAR (the National Association for Stock Car Auto Racing) held its first 500 mile race—The Pennsylvania 500—there in 1974. Race watchers keep coming back for more because they can’t get enough of the two major races held at Pocono Raceway during the summer. They all seek the same thing: the beauty of being there on a perfect day, having fun with family and friends in the stands or tailgating in the infield, and the roaring thunder of the cars that can be felt throughout their body as they pass. Though the Pocono Raceway has supplied fans with thrills and excitement for decades, the track itself went through many ups and downs that could have potentially led to its destruction.

The Pocono Raceway began its legacy in an area that many would not suspect. In the 1960s, some businessmen purchased 1,025 acres of forests and spinach fields, which would become the future home of the one of a kind triangular-shaped track. A three-quarter mile oval was finished in 1969 and the 2.5 mile track was completed two years later. In order to be the Pocono PFC (Pretty, Friendly, Clean) raceway that it is today, the track and its surroundings had to withstand some serious difficulties and major reconstruction. The first Indy Car race that was held at the Pocono Raceway was the Schaefer 500 in 1971, hosted by the Indy Racing League (IRL). But it was soon followed by nature’s fury: Hurricane Agnes left behind tremendous damage in its path. Soon thereafter, the Pocono Raceway’s very existence was threatened by an economic and energy crisis. Due to the gas shortage and economy in the 70s, the owners of the raceway, Joe and Rose Mattioli, considered selling the track to new owners. 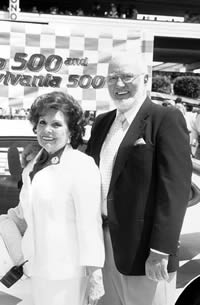 Just as they pondered throwing in the towel, they received a phone call that saved the Pocono Raceway. Bill France Sr., founder of NASCAR, told the Mattiolis in a meeting in New York not to sell the track, giving them moral support and advice. Two years later, in 1982, Mr. France’s son Bill Jr. gave the Pocono Raceway its second NASCAR race (the first was in 1974). Bill France Sr., his wife, and his son all attended the races for the next two years to show their support for the raceway. “…and as they say, the rest is history,” Joe Mattioli wrote in a history of the track posted on its website. “Had it not been for Bill France Sr., Annie B. and Bill Jr., Pocono Raceway would not be here today.”

To become a track setting the Mattiolis’ felt would attract and compel fans, they realized they would have to tear Pocono Raceway down and start from scratch. Joe Mattioli, a one-time Philadelphia dentist, boasts of having spent an average of $3 million every year for the last 30 years, rebuilding the track and correcting 20 years of what he called “mistakes.” The official rebuilding of Pocono Raceway was started in 1990 and cost around $30 million over the ten years it took to complete. The track itself had many upgrades, including new crash walls and new pavement to a unique garage area that would rival any other tracks. Many other alterations were done as well with fans in mind.

One of the most exciting additions to the Raceway was a large, fan oriented paddock area. Fans can experience amazing closeness to the cars and drivers, with only about 56 feet separating them from the whizzing cars. Another new installment that delighted many fans was the reconfiguration of the bathrooms: the Mattiolis’ removed all 375 old toilets and installed 1000 new stalls in order to minimize the lines. A new midway along the track was put up including fourteen forty foot blue spruces along with 200 picnic tables and several gazebos. NASCAR mentions on its website that for the most loyal of fans, “Pocono has one of the most accessible pit areas for getting autographs from your favorite drivers.” The Mattioli family feels that they have fulfilled their idea of Pocono PFC, and states on their website for the track that “we have no illusion of becoming the biggest or the richest or the most famous racetrack in the world. All we want to be is the Prettiest, Friendliest, and Cleanest and to have fun along the way with all of our loyal fans these past 32 years.” Even with all of the modifications done to the Raceway area, when it comes down to it, there is a reason why it is called the one of a kind track is called the “tricky triangle.” 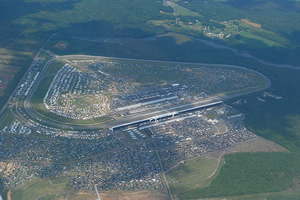 casiscac@flickr.com
The Pocono Raceway nestles in the Monroe County landscape.

The Pocono Raceway is so different from other NASCAR and IRL circuit tracks, according to the article about the track on the ESPN website, because “its triangular shape (think clothes hanger) provides a unique challenge for competitors. Each turn has a different degree of banking and a different radius, and each of the three straights is a different length.” The track itself is two and a half miles long, but since the track is very flat, drivers do not sustain the speeds that can be reached and maintained at superspeedway tracks like Daytona or Talladega. What is amazing about each of the three different turns, and what makes this track so challenging for drivers, is that each of the three turns represents a different kind of track setting. It is only after drivers have sped through the longest straightaway of all the NASCAR circuits, which is the front stretch and is 3,740 feet long, that they are challenged to see who the best driver is.

Heading into turn one, drivers can expect a 14-degree turn that would resemble a superspeedway, meaning that they do not have to break as much heading in. A 3,055 foot straightaway lies ahead. Turn two is referred to as the “tunnel turn” because there is a tunnel underneath the track where Long Pond Road connects to Tunnel Road underneath, allowing fans to drive underneath the track and into the infield. Turn two is an 8-degree turn that simulates the type of turn drivers would find on a short track (which is a track that is less than one mile long, such as Bristol Motor Speedway). “Because of the speeds and the angle that drivers must approach that turn, the ‘tunnel turn’ is widely considered one of the most difficult in NASCAR,” says Premiere Sports Travel. In order to complete a full lap, drivers must finish up by completing one last 1,780 foot straightaway leading into a 6-degree third turn. This final turn gives drivers a sense of being on a road-course track, such as Sonoma’s Infineon Raceway (the track has no specific shape). While almost all tracks are oval-shaped there are a couple of road-courses in NASCAR which have no specific shape, and turn three mimics this flat turn on Pocono Raceway. Any driver attending the Pocono Raceway to compete in a race better expect to have their abilities pushed to the max. 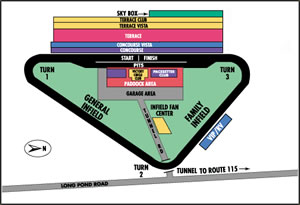 2ktours.com
The unusual shape of the Pocono Raceway has appealed to both fans and drivers through the years.

So whether fans come to the Poconos for the race or to spend time tailgating with friends and family, the “tricky triangle” is the perfect attraction to appease any type of person looking for a thrilling time. It also helps immensely that the Raceway is near the two very large tourist markets of Philadelphia, PA and New York, NY, which allows fans to have many options when creating an exciting weekend in the Pocono area. Pocono Raceway is one of the best races that a loyal or new fan of NASCAR can enjoy and it is no wonder that, reports Premiere Sports Travel, “the Mattiolis welcome nearly 100,000 ticket holders to their home in the Poconos twice each year, where drivers like Bill Elliott, Rusty Wallace, Tim Richmond and Darrell Waltrip have been among the all-time standouts.”