While most state parks are famous for their daytime recreational activities, such as hiking and picnicking, Cherry Springs gains its notoriety from what happens at the park once the sun sets and the night creeps in. Resting in the blackness of Potter County's woods, just off of state route 44, it is Pennsylvania's dark secret. Cherry Springs State Park, unbeknownst to many Pennsylvanians, has some of the darkest, clearest nights in the country, making it one of the best places to observe the natural star-studded sky.

Only a few hours distance away from the light pollution caused by the east coast's bustling cities, Cherry Springs' dark skies are a marvel. The 106 acre park rests 2,300 feet above sea level atop the Allegheny Plateau region. The elevation of the park gives a 360 degree view of the night sky, in what National Geographic called "a bona fide 21st-century Eden." According to the Wildlife Conservation Society's Human Footprint report, north-central Pennsylvania is as rough and uninhabited as the Brazilian Pantanal Wetland or the Asian Gobi Desert. These conditions have made Cherry Springs "one of the best places on the eastern seaboard to observe dark skies," as National Geographic Traveler reporter Rachel Dunlap, wrote. Cherry Springs is also ideally positioned beneath the nucleus of the Milky Way, offering a fantastic view of nebulae and star clusters. 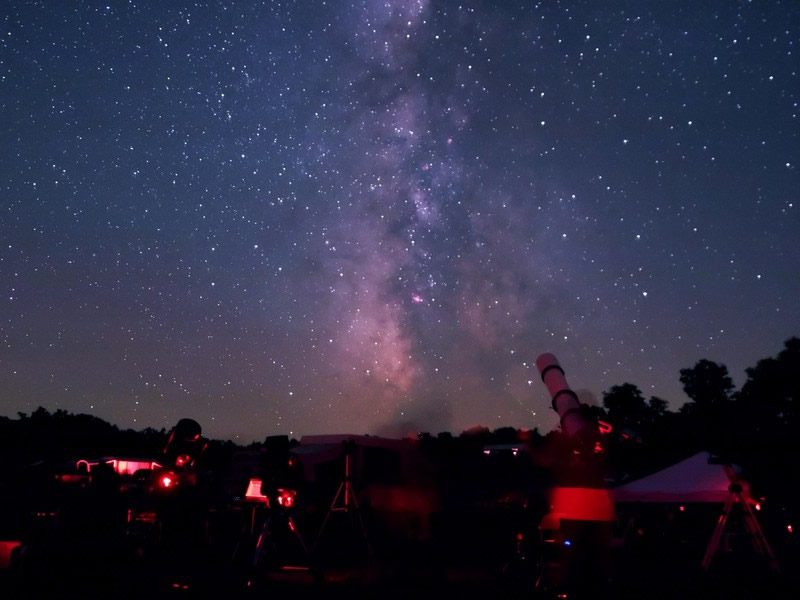 Since 2000, Astronomers and amateur stargazers have flocked to remote Cherry Springs from around the country, just to stand and tilt their heads towards the cosmos. After visiting the park in 2007, New York Times writer Dave Caldwell wrote, "On a perfect night, particularly during a new moon, the Milky Way is so bright it casts shadows. Stargazers hold out their hands and look at the shadows on the ground in awe." While city and suburban stargazers may only see thirty to a thousand stars speckled across the sky, visitors to Cherry Springs are treated to a brilliant splattering of about 10,000 stars. "You get kind of overwhelmed at how many stars are actually visible," astronomer Stanley Nawrocki told Caldwell.

The dark skies above Cherry Springs present a stellar view of the universe, but due to extreme light pollution, that view could soon be gone. Today, dark skies are considered to be an ever dwindling natural resource. In 2000, the Pennsylvania Department of Conservation and Natural Resources recognized the precious darkness of Cherry Springs' skies and named it Pennsylvania's first Dark-Sky Park. A year later, Cherry Springs received global recognition when it was chosen as the International Dark-Sky Association's second International Dark-Sky Park.

The International Dark-Sky Association (IDA) was created in 1988 in response to the growing issue of light pollution. Light pollution not only destroys the astonishing view of the night sky, but it damages ecosystems, nocturnal wildlife, and the human circadian rhythm. Animals dependent upon the sun react to human artificial light. Bats are now accustomed to attacking the porch light-swarm of insects, seabirds spend hours circling oceanic oil platforms, sometimes until death, and sea turtles are unable to find dark enough beaches to nest on. "Darkness is essential to our biological welfare, to our internal clockwork, as light itself," Verlyn Klinkenborg wrote in National Geographic in 2008. The IDA's mission is to prevent the negative effects of light pollution and to restore the skies to their natural blackness. 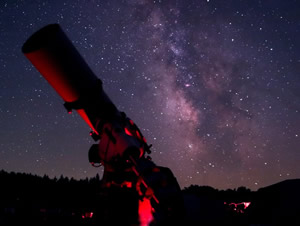 As an IDA park, Cherry Springs takes various measures to protect its sky. On the park's Astronomy Observation Field, damaging white light is replaced by the eerie glow of red light and after dark, the park management enforces that all lighting be shielded, including light from cell phones, computers, and cars. Other park rules forbid campfires and camera flashes, and flashlights must be kept pointed downward within this field. This field is intended for overnight stays by visual astronomers and astrophotographers and does involve a fee, according to Maxine Harrison of the CSSP Dark Sky Fund/Association.

To decrease light pollution from outside of the park, Cherry Springs park managers work to educate the surrounding towns about the adverse affects of light pollution and ways to prevent it. One community, Galeton, Pennsylvania, is active in helping to protect the skies, installing light fixtures designed to reduce pollution.

The Cherry Springs Dark Sky Fund/Association, made up entirely of volunteers, strives to maintain the unspoiled dark skies above Cherry Springs through collecting donations and funding the park's needs. Within the park, the Dark Sky Fund/Association conducts public programs in the Night Sky Public Viewing Area, a portion of the park where the strict rules of the Astronomy Observation Field are not in force and in which all the normal pleasures of camping at a Commonwealth campground are available. Harrison points out that this portion of the park is ideal for “those wishing to stargaze for a few hours” and that it costs the viewer nothing.

All the hard work to preserve Cherry Springs' skies has paid off. In 2008, Cherry Springs became the world's second Gold Tier International Dark-Sky Park. The IDA ranks Dark-Sky Parks as Bronze, Silver, or Gold, depending on the amount of light pollution that affects the park's night sky. Gold Tier parks have "pristine or near-pristine night skies that average close to natural conditions," as is defined in the IDA's Dark-Sky Park Program guide. The only other park to achieve the Gold Tier is Natural Bridges National Park in Utah. Cherry Springs’ Park Operations Manager and Chad Moore, “Night Sky Ranger” for the National Park Service, were part of the development team that pioneered the concept of ranking.

According to the National Parks and Conservation Association, only 10% of Americans have seen a natural sky; one devoid of the orangey haze of light pollution. "A star-filled night sky is an important legacy that is, sadly being lost in this country," said Thom Bemus of the National Public Observatory (NPO). Fortunately, at Cherry Springs more and more people are getting the opportunity to do that. Through a partnership with the NPO, Cherry Springs offers a variety of free events to the public as part of the Stars-N-Parks Program from May until October. Weather permitting, visitors receive guided tours of the night sky. "A typical, clear, summer Stars-N-Parks night is usually attended by 100-150 people," Bemus, the Stars-N-Parks Program supervisor, said. "On some exceptional nights, we have had in excess of 300 people on hand." Maxine Harrison of the CSSP Dark Sky Fund/Association adds that attendance now averages 200 to 250 people per program. 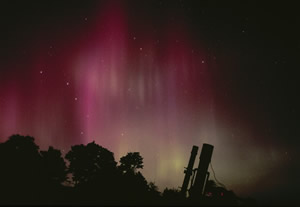 One of those exceptional nights came in 2001 when Bemus and others stayed awake all night in sleeping bags to observe the Great Leonid Meteor Storm. When the night began, only 40-50 meteors were falling per hour. By 5:20AM meteors, or shooting stars, were streaking across the sky at a rate of 3,500 per hour. "The sheer spectacle of meteors falling from the sky at nearly one per second is an experience hard to imagine for anyone who has never seen it," Bemus said. "...We saw several bright meteors that were seen even with the sun above the horizon... amazing!"

Meteor showers, like the Leonids, are predictable. The only variable that may interfere viewing such a spectacle is the weather and cloud cover is always a possibility. Other skywatching events occur much less frequently. The aurora borealis, as pictured above, is such an event. The aurorae are closely tied to the eleven year cycle of solar activity. When the sun is most active, at the “Solar Maximum,” seeing the aurora is much more likely. The next anticipated opportunity to view the aurorae at Cherry Springs is expected in 2012 and 2013, the next occurence of the Solar Maximum.

In addition to Stars-N-Parks, Cherry Springs offers other free events to the public such as Tours of the Night Sky (naked eye, binocular, and telescope viewing), Lunar Programs, and Nocturnal Wildlife Programs. Cherry Springs also hosts two annual star parties that charge an attendance fee. During star parties, astronomers and amateur stargazers gather with telescopes, binoculars, or just their eyes and observe the stars together. The Cherry Springs Star Party is sponsored by the Astronomical Society of Harrisburg and the Black Forest Star Party is sponsored by the Central Pennsylvania Observers from State College.

According to Bemus, whether one is attending an event at Cherry Springs or observing from a local area with decent dark-sky conditions, "The most important experience to have is to simply spend some time gazing at the vast majesty of the night sky... mankind needs the connection to the night sky to maintain a sense of wonder. Without wonder, how sad and dull the world will become."

Today the power of stargazing, an ancient activity, has been veiled by light pollution and lost in the luminosity of offices, traffic jams, and arenas. A hundred years ago, a perpetual orange haze did not obscure the Milky Way; light pollution did not exist then. Vincent Van Gogh's 1889 masterpiece, Starry Night, depicts a sky few Americans have seen naturally—bright and mystical. Fortunately, today Van Gogh's art-inspiring view is not extinct everywhere. At Cherry Springs State Park, anyone who leans back and looks up is sure to experience all the wonderment and awe that coincides with gazing at one of the last, true starry nights.

Cinzano, Falchi, and Elvidge/Royal Astronomical Society
Astropix.com
A light pollution map of the Northeast shows Cherry Springs State Park as an island of blackness in the northwest corner. It is designated as location #2.