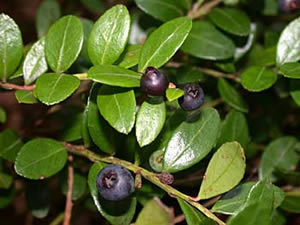 Will Cook
The box huckleberry of Perry County has many characteristics similar to the blueberry.

California’s giant sequoias have astounded humans for centuries with their size and age. Rising nearly 300 feet above the ground, these trees cast a shadow on everything else in the forest. Because the trunk is often over 30 feet in diameter, lumberjacks have been able to build tunnels through the trunks of some trees for cars to drive through, such as the famous Wawona Tree of Yosemite National Park. Not only is the giant sequoia a skyscraper among a city of trees, it is also extremely old, with some specimens estimated to be one or two millennia old. It is rare to find a species of such great size and age, but Pennsylvania is home to a plant that is several times larger in area and far older than the giant sequoias of California. The box huckleberry. 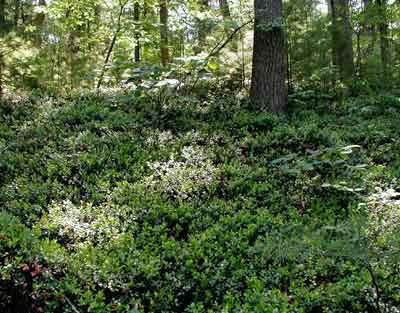 At first glance, the box huckleberry (Gaylussacia brachycera) appears to be just another plant. It is low and green and spreads abundantly across the forest floor, only rising one foot above the soil. While its height is not impressive, its surface area is like no other. The box huckleberry stretches for hundreds of feet in all directions, and every visible stem and leaf poking up from the soil belongs to just one plant.

The box huckleberry grows in two different locations on the eastern side of rural Perry County, covering several ridges. One colony grows in Losh Run, alongside the Juniata River near Route 322/22. The other colony is protected within the Hoverter & Sholl Box Huckleberry Natural Area in the Tuscarora State Forest, several miles outside the county seat of New Bloomfield. 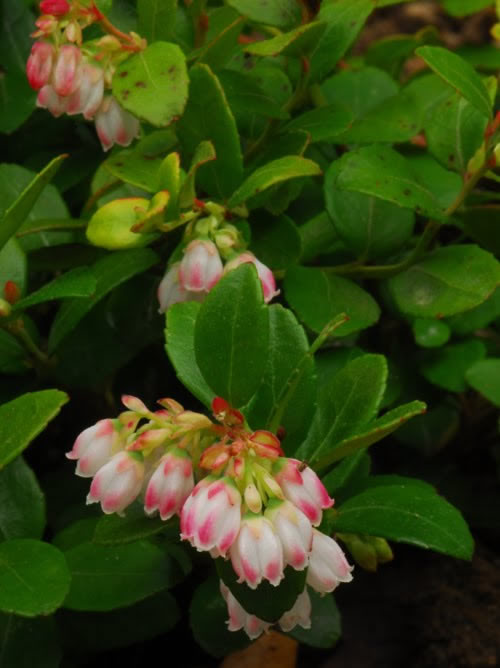 Terry Howes
Box Huckleberry flowers, unlike those of most blooming plants, are seldom used for sexual reproduction.

The box huckleberry is a low-growing shrub, only reaching about a foot in height. Its one-inch oval leaves resemble those of a boxwood shrub, and it is from this resemblance that the box huckleberry gets its name. As the box huckleberry is an evergreen, its glossy, leathery leaves are visible all year round. The box huckleberry has white bell-shaped flowers and produces dark blue, tasteless berries, which usually appear in July and August. The fruit resembles a blueberry, but has larger and fewer seeds. Since the plant is self-sterile, meaning it cannot pollinate itself, the box huckleberry reproduces asexually by rhizomes. A rhizome is a horizontal stem, usually found underground, which extends roots deep into the soil and shoots up to the surface. The shoots grow up into clones of the original plant, thus allowing it to reproduce without pollination. The box huckleberry has an elaborate network of rhizomes growing beneath the soil, connecting every individual shrub into one giant plant.

The box huckleberry was first discovered in Virginia in 1796 by Andre Michaux. This newly discovered plant soon perished, and the box huckleberry was not seen in the United States again until its rediscovery in 1846, this time in Pennsylvania. The plant was found in Perry County by Professor Spencer F. Baird of Dickinson College. Baird, a young naturalist, stumbled across the colony near New Bloomfield. The significance of the plant was not known until research was done on the plant some years later.

Fredrick Coville was—and still is—one of the most famous of the researchers of the box huckleberry. Coville graduated from Cornell University in 1887 with a degree in botany and worked for the Department of Agriculture. His work with the box huckleberry started in the early 1900s. In 1919, Fredrick Coville theorized that the box huckleberry was one massive plant connected by rhizomes, saying, “The theory I advance is that the whole patch has spread by the root from a single plant. If this theory is correct, the plant is undoubtedly more than a thousand years old.” 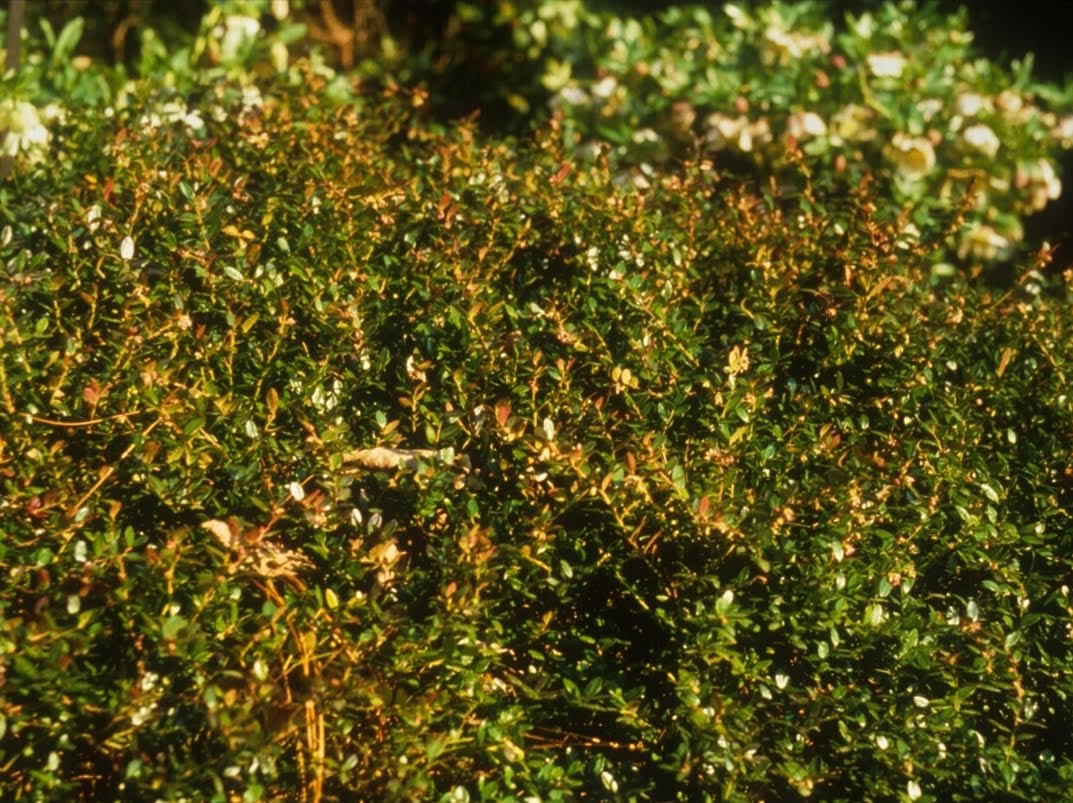 Terry Howes
A mass of fruit ripens on the box huckleberry stems. By most accounts, however, they are not as tasty as their cousins, the blueberry or the cranberry.

Coville compiled a list of evidence to support his claim. When he visited the New Bloomfield colony, he noted in his journal that “the plant is remarkably uniform over the whole area.” He also noted, “As additional evidence that the whole of the eight-acre patch consists of a single plant, I may say that notwithstanding the most painstaking search we found no seedlings.” Through these observations, Coville began to form his theory about the plant’s structure and age. Finally, Coville also wrote, “I have recorded elsewhere, in an account of my blueberry breeding experiments, that individual blueberry plants, close relatives of the huckleberries, are partially or completely sterile to their own pollen.” This means that seeds would be unlikely to form at all. After examining the few seeds that were created, only 10% of the seeds actually contained endosperms, the nutrient part of the seed necessary for germination. Coville’s lab trials later showed that the germinated seeds produced plants too weak to survive. All of these factors supported Coville’s theory that the plants contain a single strain of protoplasm, the genetic makeup of an organism. Because the plants are all the same, all the plants in the several-acre colony had to originate from the same seed, and every plant in the colony was thus produced from a rhizome of an already-existing plant.

When foresters determine the age of a tree, they simply count the rings in the trunk. Determining the age of a shrub is more difficult than counting rings, but it is possible. By determining the growth rate of the rhizomes and the plant’s size, the age can be calculated. Botanists determined the rhizomes from the box huckleberry grow at rate of 6 inches per year. By using the total length of the plant colony and the rate of growth per year, Coville determined the box huckleberry to be 1300 years old. 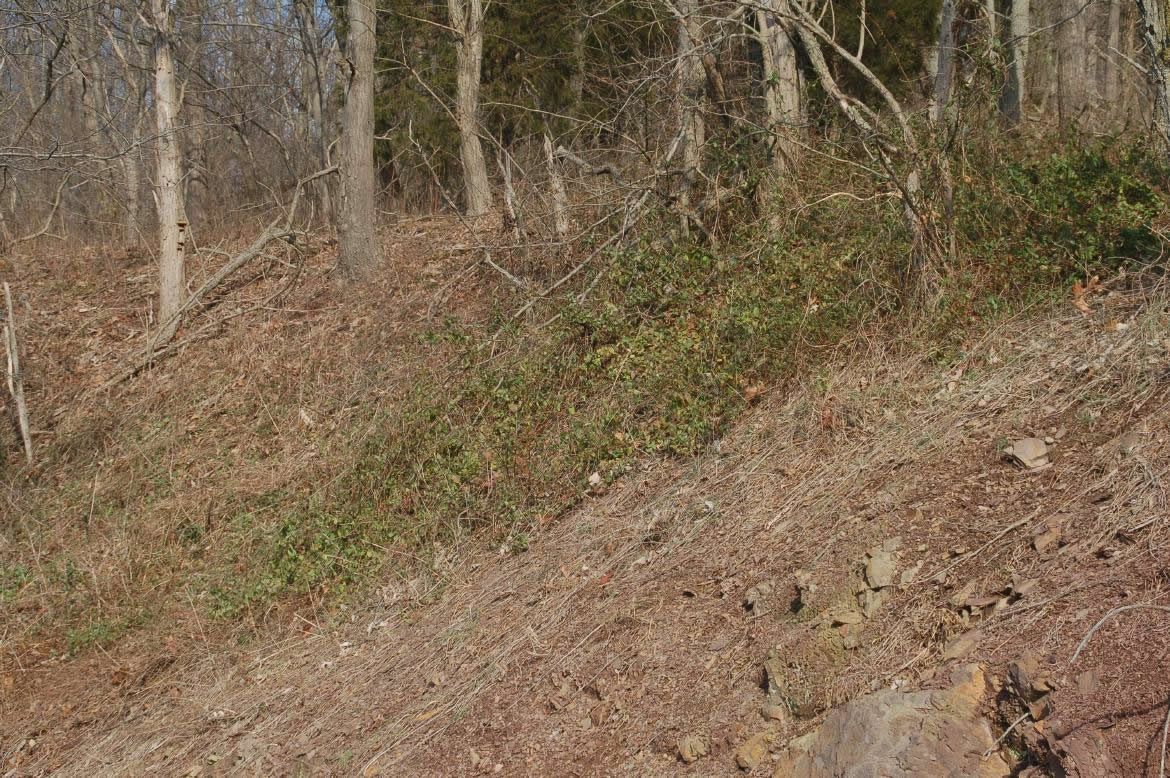 John Styers
The Losh Run box huckleberry plant is thought to be as much as 13,000 years old. Though damaged in the 1970s, areas of the original plant still survive, as on this hillside.

In 1920, Harvey Ward stumbled upon another box huckleberry plant on the eastern side of Perry County, by Losh Run along Rt. 322/22. The box huckleberry’s fame comes mainly from this particular colony. The colony at Losh Run was several times larger than the one outside New Bloomfield, and was surveyed to be around 6,500 feet long. Botanists found that this newly discovered colony of box huckleberry had the same absence of seeds as the New Bloomfield colony. Using the rhizome growth rate, botanists determined the colony at Losh Run to be around 13,000 years old. This made the plant the oldest living organism in the United States and the oldest living organism in the world. Sadly, most of the plant at Losh Run was destroyed in the 1970s due to road construction on Rt. 322/22. The remains of the plant at Losh Run are scattered throughout private properties and remain unmarked.

Because the box huckleberry has limited reproduction, the Pennsylvania Department of Conservation and Natural Resources (DCNR) has classified it as a threatened species. The DCNR defines “threatened” as “Species that may become endangered within the foreseeable future throughout their range in Pennsylvania.” While this classification is not as severe as endangered, it still provides protection to the box huckleberry. In 1967, the box huckleberry colony outside New Bloomfield was designated a National Natural Landmark. [Insert figure 4] This status, along with state forest rules and regulations, protect the plant by prohibiting anyone from collecting or taking it from the area. Furthermore, future road construction is unlikely to damage the Losh Run plant because the plant is listed as threatened.

The box huckleberry is not just confined to Pennsylvania. Many younger colonies exist in other Appalachian states. Box huckleberry colonies can be found in Tennessee, Kentucky, Virginia, West Virginia, Maryland, and Delaware. In fact, a colony was recently discovered in 2003 in North Carolina by Stefan Bloodworth. This is startling to researchers because the plants rarely reproduce through seeds, though it is possible that a seed became fertilized and was carried away by an animal, thus starting this new colony. 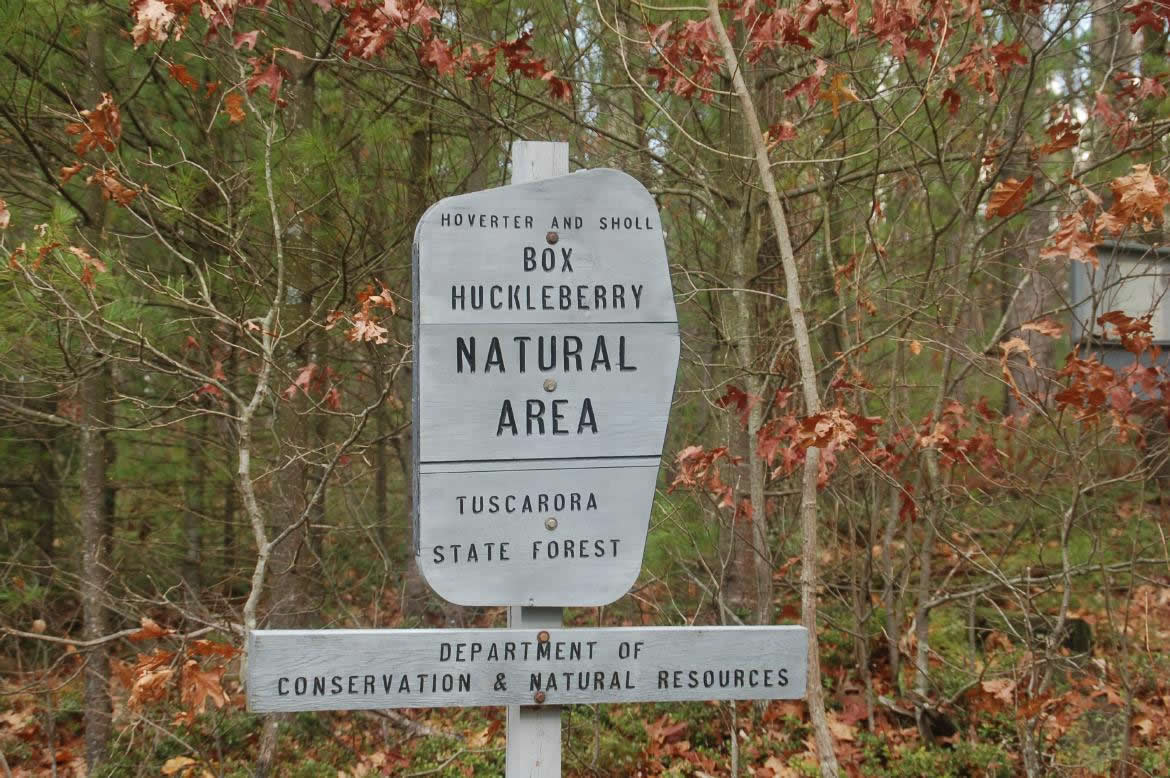 John Styers
Pennsylvania has declared an area of the Tuscarora State Forest a protected area for the Box Huckleberry so incidents like that at Losh Run will not be repeated.

Today, hundreds of people visit the Hoverter & Sholl Box Huckleberry Natural Area each year to see one of Pennsylvania’s natural wonders. Located on a ridge several miles outside New Bloomfield, the Hoverter & Sholl Box Huckleberry Natural Area is Pennsylvania’s smallest state-designated natural area. To the untrained eye, it looks like any other patch of woods, with mountain laurel and hemlocks scattered throughout the blanket of vegetation. A nature trail winds throughout the box huckleberry plant, allowing visitors to walk through. Because the plant is an evergreen and keeps its leaves in the winter, the natural area has visitors all year round.

Despite its lack of worldwide fame, the people of Perry County take great pride in the box huckleberry. Every New Year’s Eve, a giant, sparkly blue, papier-mâché huckleberry is dropped from the top of the court house in New Bloomfield. The tradition was started by Dale Beaston in 1994, because, as he told The Patriot-News, “Nothing was really going on in town here... We put it up and it went over big. It was nice and it’s just kept going like that. It’s a nice thing. The town responds well to it.” Hundreds of locals gather each year to celebrate the New Year and the box huckleberry. 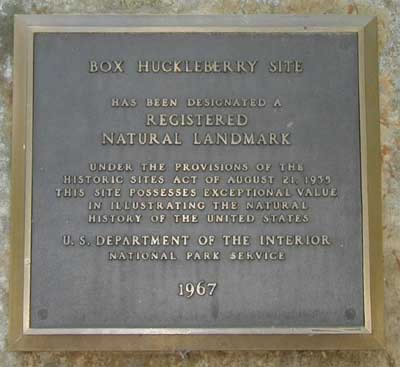 The box huckleberry is just one of many national and state treasures--possibly even an international treasure, since it is the world’s oldest known living organism--but its existence is not widely known. Despite its lack of recognition elsewhere, this remarkable plant is beloved by the people of Perry County and the plant enthusiasts who know it exists, and every year, hundreds of people go to see it. It may not be as majestic as a giant sequoia, but this lowly shrub was growing on the forest floor thousands of years before any of California’s trees were even seeds, and long before Pennsylvania was founded.

The Center would like to thank Will Cook, John Styers, wildeherb.com, and Terry Howes' Encyclopedia of Edible Wild Plants of North America at Picasaweb.google.com for their assistance in illustrating this article.