The Philadelphia Lazaretto: A Most Unloved Institution

Smallbones / Wikimedia
The Philadelphia Lazaretto as it stands over 100 years after its original mission ended.

In mid-July 1800, the U.S.S. Ganges, on the U.S. Navy’s earliest warships, encountered two American schooners, the Phebe and the Prudent, while navigating the Straits of Florida. These schooners held neither sugar cane nor corn but rather human cargo, 134 chained captives from West Africa to be exact, doomed for delivery to a notorious slave trader in Havana, Cuba. Commissioned with enforcing the newly-passed Federal Slave Trade Act that prohibited the transport of slaves by U.S. ships, Ganges Captain John Mullowny seized the Phebe and the Prudent, assigned prize crews to man both ships, and commanded them to sail north for Philadelphia. After a 1,500 mile, month long trip up the eastern coast of the United States, the crews arrived at the confluence of the Schuylkill and Delaware rivers with their recently confiscated cargo. Emaciated, exposed, and, surely disoriented, the scores of African survivors disembarked on Province Island, home to the Marine Hospital, a.k.a. the Philadelphia Lazaretto.

“The Ganges Africans” – the name bestowed upon them after many were given the surname Ganges—were part of one of the first slave trade violation cases confronted by the newly-established Federal judicial system. Their story exemplifies the ideological clashes that were occurring in the young nation and that would eventually boil over into the Civil War. Interestingly enough, at least two of the Ganges Africans would have extended stays in the Philadelphia area. One of them would become an indentured servant to Thomas Egger, the last quarantine master of the “old” Lazaretto on Province Island and the first one of the “new” Lazaretto in Tinicum Township, Delaware County. A second of the slaves was indentured to farmer Thomas Smith who had sold the property for the new facility to the Philadelphia Board of Health. 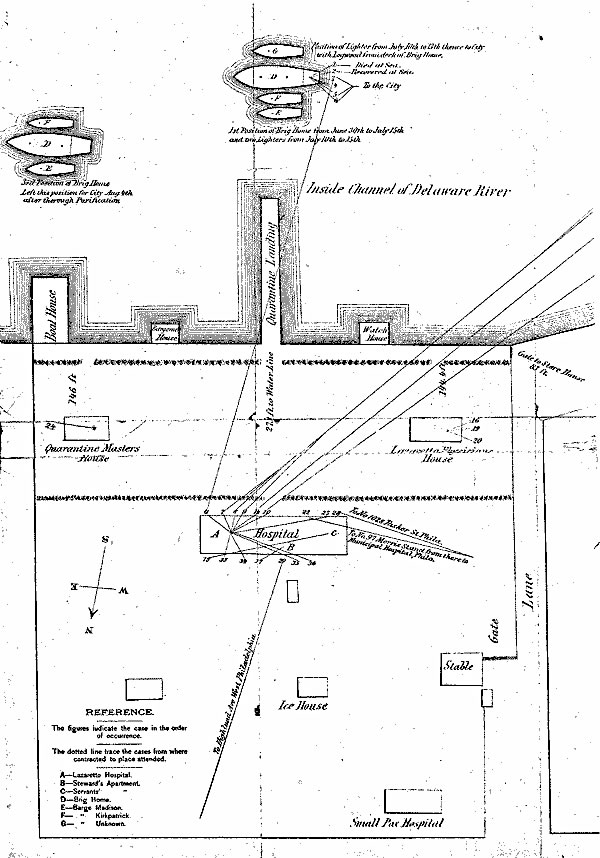 Independence Hall Association
The Lazaretto grounds grounds were planned to fulfill many functions connected to public health and immigration.

Moreover, their story reflects in miniature the history of the Philadelphia Lazaretto itself: integral to our nation’s demographic and political landscape and yet often overlooked. Stories like those of the Ganges Africans and the thousands of others who remain little-known or whose tales are untold are the reasons University of Pennsylvania historian David Barnes calls the Philadelphia Lazaretto a place “even rarer and more precious than New York’s [Ellis Island].”

Lazaretto seems an unusual name for a hospital in the American colonies. As it turns out, however, the word would become a common English term for isolation facilities and quarantine hospitals, ceasing to be a proper noun at all. As one might think, the term derives from the Italian, but its exact provenance is not completely clear. One theory holds that in 16th century Venice, the name of a local hospital, the Nazaretto, was combined with the name of Lazarus the Beggar from the New Testament. Professor Barnes notes that this theory is less plausible than the simpler, and generally accepted, thought isolation wards and quarantines came to be named for Lazarus the Beggar, patron saint of lepers. Regardless of its origin, it started to be applied to the “old” facility on Province Island built in 1743, though it was still referred to the Marine Hospital. The “new” Lazaretto, however, would never be called anything else.

At the end of the 18th century, politicians and doctors throughout the United States were passionately debating public health and quarantine issues, much as members of those same two professions debate health care policy today.

Frank H. Taylor / Library of Congress
Depicted shortly after its closing, the Lazaretto still seemed idyllic in this 1895 drawing.

Thousands were falling victim to the effects of infectious diseases such as tuberculosis and yellow fever. The issue came to a head in 1793 after futile attempts to quarantine all ships arriving at the port of Philadelphia failed. A yellow fever epidemic of calamitous proportions broke out throughout the city. Within two months, the nation’s largest city and political and economic capital, lost more than a quarter of its population. Approximately 10% perished from yellow fever and another 17% fled the city.

After the 1793 epidemic, the city created a Board of Health to oversee conditions in the city. It found, among other things, that the old quarantine facility had failed terribly in preventing the propagation of yellow fever and other infectious diseases. Many authorities blamed this failure on its location only a few miles from the most densely populated parts of the city and thu, facilitating the interaction between infected patients and residents. Determined to prevent another calamity, The Board of Health constructed a new lazaretto ten miles south of Philadelphia in the isolated, uninhabited marshlands of Tinicum Township, Delaware County.

Construction of the Philadelphia Lazaretto finished in 1801, almost a century before the building of New York’s Ellis Island and San Francisco’s Angel Island. Upon completion, the Lazaretto was the first of its kind. It was a complex—both stately and state of the art—that, as The Philadelphia Public Ledger said in 1879, “might be mistaken for [the grounds of a] wealthy country gentleman….were it not for the yellow Quarantine flag.” 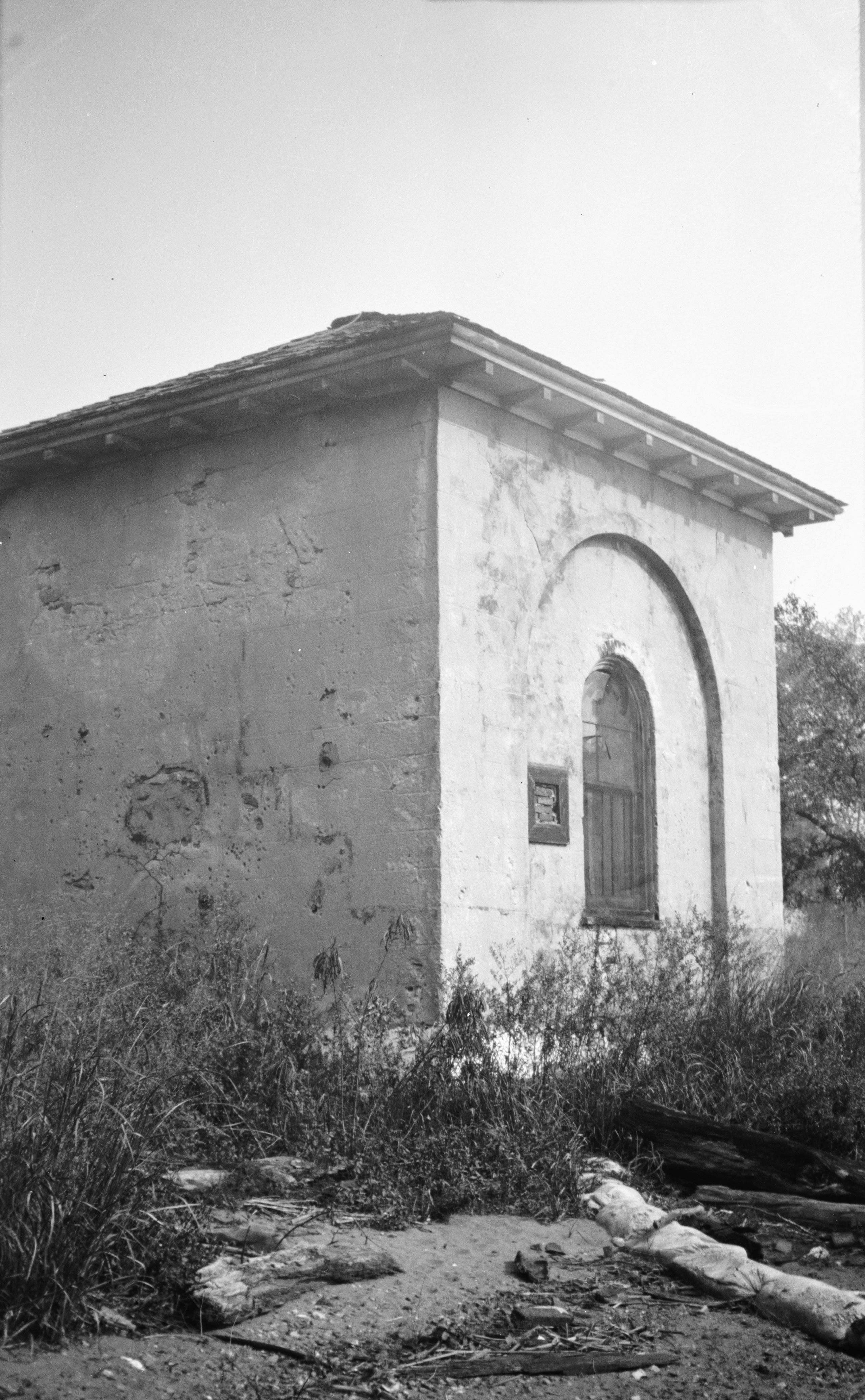 Joseph P. Sims / Library of Congress
As a port of entry to the United States, the Lazaretto needed to take security precautions, building guardhouses like this one to keep the quarantined in and intruders out.

The central figure of the ten acre campus was the main hospital, an august Georgian, double-brick building that could house upwards of 200 patients at a given time. The campus also included the following: the Dutch hospital which was added in 1805 and was primarily used to house German immigrants afflicted with smallpox; the dead-house which was used for incinerating infected patients’ belongings; the barge houses which served as the waiting and sleeping quarters of the bargemen on duty during quarantine season; the residences of the chief physician and the quarantine master; and the government warehouse which stored the goods and merchandise of the quarantined vessels. These facilities and the sheer size of the campus made the Philadelphia Lazaretto a state-of-the-art hospital in comparison to its contemporaries. Remarkably, more than two centuries after their construction, the main hospital building and several other buildings remain intact and are rather well preserved.

During its years of operation from 1801 to 1893, the Philadelphia Lazaretto was certainly neither revered nor loved. As a matter of fact, sailors, merchants, and newly arriving immigrants dreaded and abhorred the sight of its flag—a yellow banner. It was, as University of Pennsylvania professor and the Philadelphia Lazaretto’s de facto historian David Barnes calls it, a most unloved institution. During the hospital’s near century of operation, the Philadelphia Lazaretto’s staff inspected and quarantined hundreds of thousands of merchant ships, much to the chagrin of businessmen and sailors. The hours, days, or even months at the Lazaretto meant the spoiling or confiscation of cargo and, in turn, the loss of significant capital. In addition to the loss of the merchants’ cargo, the Philadelphia Lazaretto was also the site at which sailors and immigrants perished. Many immigrants, much like the “Ganges Africans,” took their first steps on American soil. According to various estimates, a thirst of all Americans have an ancestor whose first contact with the New World was at the Lazaretto. 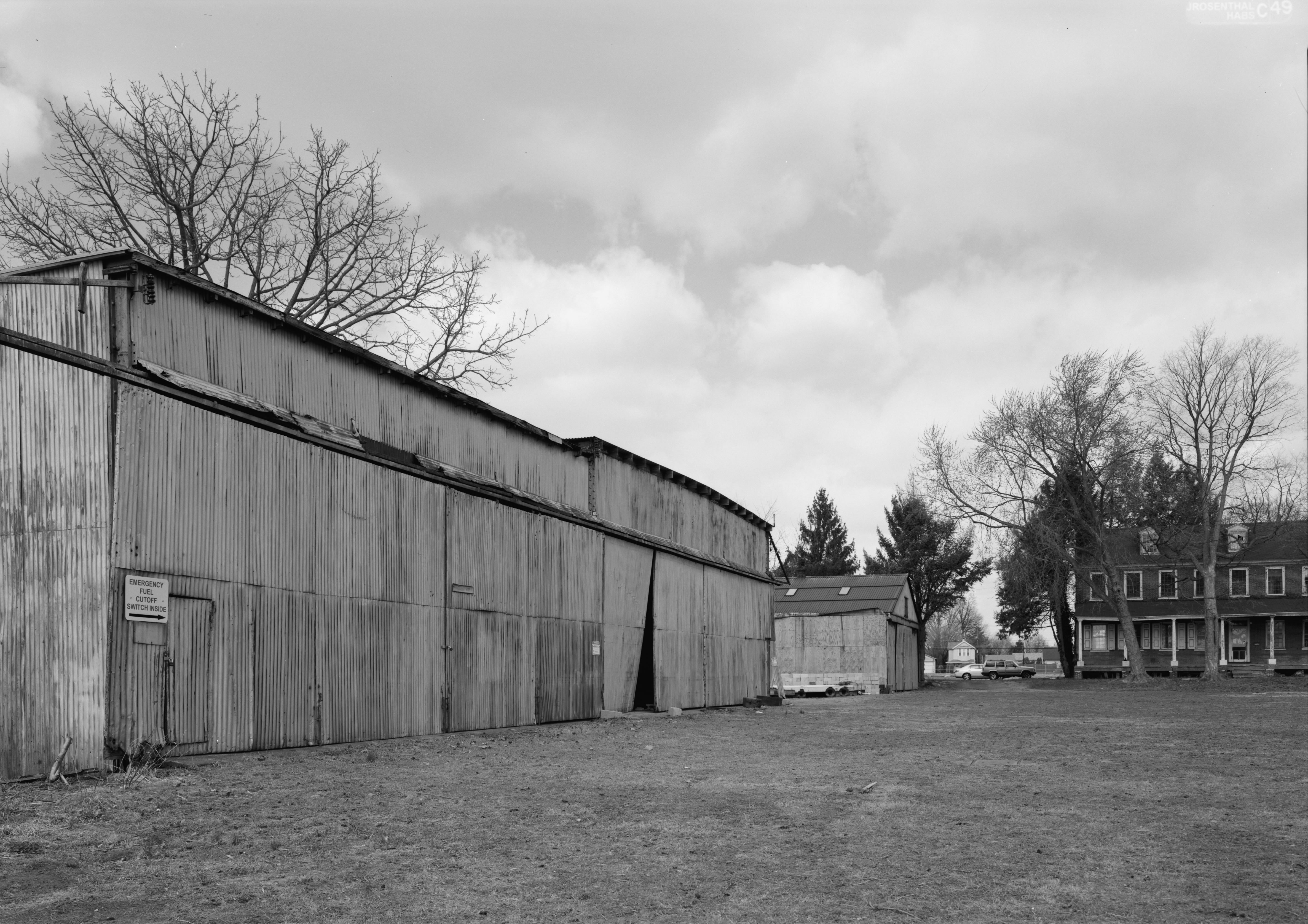 James W. Rosenthal / Library of Congress
In latter days the Lazaretto grounds were home to an aviation school, whose planes were housed in these hangars.

After closing its doors as a quarantine station in 1893, the site and the buildings went through several transformations. The Philadelphia Athletic Club purchased the site and renamed it the Orchard Club. The Orchard Club was a summer get-away for wealthy Philadelphians who used its prime waterfront location for leisure and recreation. There were several athletic clubs whos sponsored baseball teams during this era, and some even played their games on the grounds of the Lazaretto. These were not, however, the forerunners of the American League’s Philadelphia Athletics. After the closing of the Orchard Club, Colonel Robert Edward Glendinning—a substantial contributor to wartime aviation in the First World War—and George C. Thomas opened the Essington School of Flying in 1913. It was the state’s first water flying school and one of the first in the world.

Sadly, today the Philadelphia Lazaretto lies, mostly forgotten, in the same marshlands of Tinicum Township, Delaware County. Were it not for the tireless lobbying of a group of hard-working activists, the site may well have been destroyed. Though a township firestation was recently build on the northern half of the Lazaretto site, there is still much worthy of preservation. Similar projects, like New York’s restored Ellis Island and San Francisco’s Angel Island (in process), have given voice to the thousands and hundreds of thousands who came to these shores. The Friends of the Lazaretto and others are working hard to ensure that the rest of the site will stand as testament to the immigrants who landed in Philadelphia.