Philadelphia's Main Line: It's Not Just a Place - It's a Lifestyle 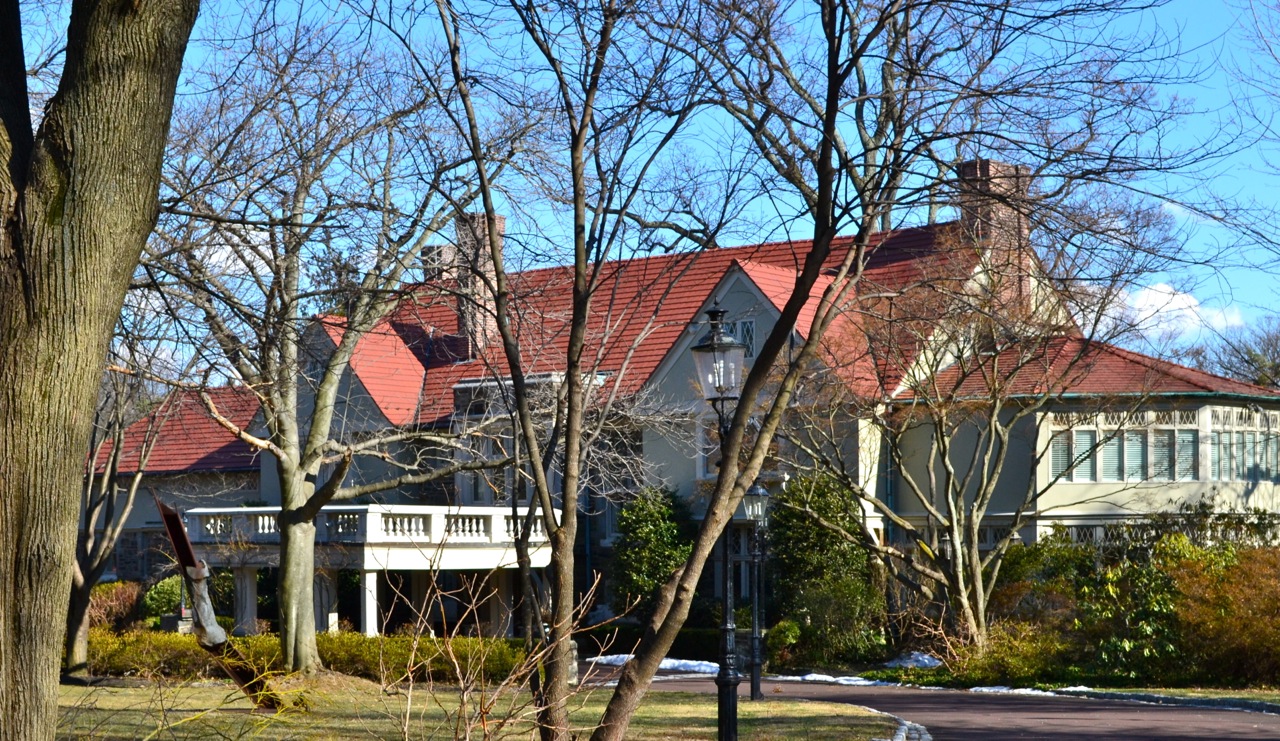 ©Casey Murray
This Highland Estate looks remarkably like the one used in The Philadelphia Story.

The mansion stood at the end of a half-mile long drive, in the midst of 750 acres. The estate was magnificent, to say the least. It had been erected in 1911, in the style of the Georgian Revival, and was crafted by the prolific architect Horace Trumbauer – designer of the Philadelphia Museum of Art, the Duke University Chapel, and the main Harvard University Library, to name just a few. The façade of the manor was classic “old money” – adorned with brick, accented with ornate cream molding, and finished with large traditional sash windows.

The interior was just as impressive. The estate boasted 50 rooms lined with paintings by the likes of Renoir, Degas, and Pennsylvania’s own Mary Cassatt. There were 13-foot high ceilings, marble staircases, a ballroom, a “brandy and cigar” room, and a dining room table that comfortably accommodated 30 well-heeled guests.

Too good to be true? A fairytale perhaps? Surely, a scene from a movie? Well, yes... and no. Because not even MGM, the esteemed motion picture conglomerate, would believe it. The mansion, Villanova’s Ardrossan estate, was the inspiration for 1940s The Philadelphia Story, and has since been dubbed by the Philadelphia Inquirer a “house so grand, even Tinseltown had to tone it down.” The house in question, however, is very much real, as is the lifestyle that comes with it. 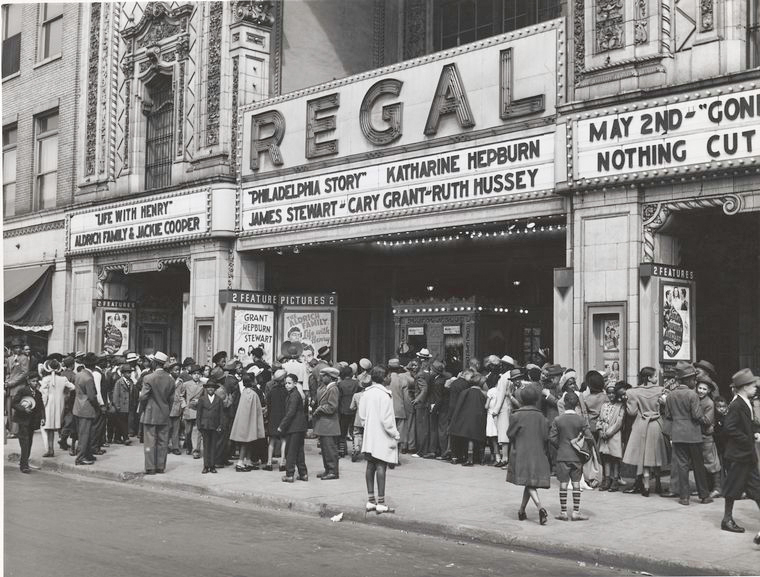 ©Michael Donovan/Flickr
Crowds gather at the box office to see the iconic movie The Philadelphia Story.

But Ardrossan is only one small portion of the prestigious and affluent area known as the Main Line. Situated just west of Philadelphia, it is comprised of the seventeen different towns in Montgomery, Delaware, and Chester counties – each of which is connected by the railroad, and the area’s namesake, the Main Line.

Initially, the railroad line grew out of competition. To the north, New York had built the Erie Canal, opening trade and settlement into the Great Lakes area; to the south, Maryland had the Baltimore and Ohio Railroad, connecting the port city with the Midwest. In attempts to remain relevant in the midst of the Industrial Revolution, Philadelphia’s wealthy businessmen yearned for a way to increase trade and continue expansion westward. With these ideals in mind, a state charter was issued in 1823 to commence construction on an eighty-two mile railroad, running from Philadelphia, through Lancaster, and ultimately ending in Columbia, Lancaster County, on the banks of the Susquehanna River. 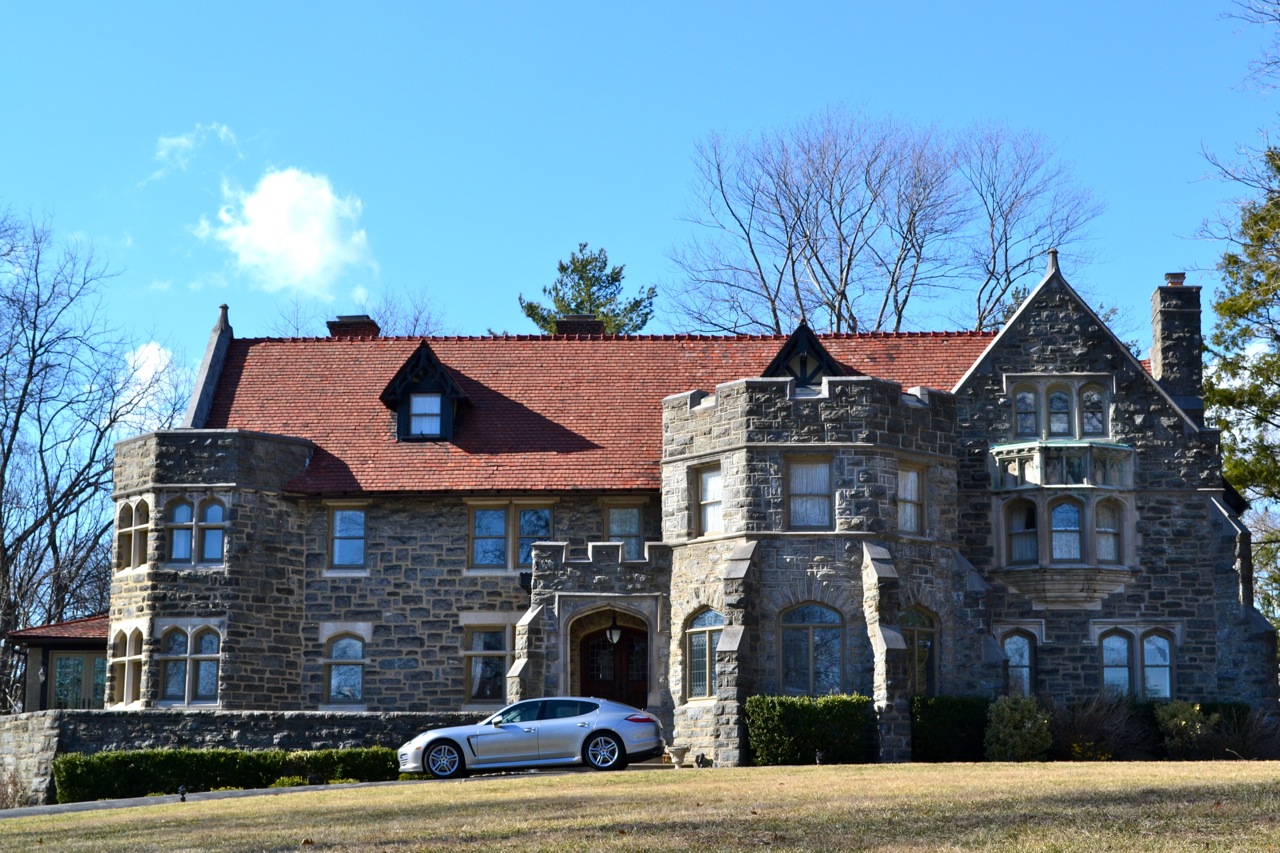 The line was not only to be the first railroad in Pennsylvania, but also the first in the world to be built by the government. It began as an entity of the “Main Line of Public Works for the State of Pennsylvania” and was christened the Philadelphia & Columbia Railway. The project took nine years to complete, with its first train taking off in 1832. But it wasn’t until the advent of the steam engine in 1834 that things really took off.

Railroads suddenly became immensely popular and subsequently the state could no longer fund the railroad – managing and maintaining its operations had become too costly. It was this shift that led to the Pennsylvania Railroad Company’s (PRR) 1857 acquisition of the Main Line. From there, the railway grew from its initial three stops to the seventeen it has today. Eventually, Sally Downey of Philly.com notes, a mnemonic, “Old Maids Never Wed And Have Babies Period” was used to help Philadelphians memorize the “westbound stops” of the Main Line: Overbrook, Merion, Narberth, Wynnewood, Ardmore, Haverford, Bryn Mawr, and, after unnamed others, Paoli.

Due to its ever-growing popularity, the PRR began to focus its efforts on not just the transportation of cargo, but of commuters as well. From this development, the Main Line was born. The ease and convenience of the railroad drew even more of Philadelphia’s elite to travel from the city to the sprawling countryside. Recognizing its potential to expand the line, the PRR converted the land surrounding the railroad into the large and stately manors that still stand today. As the Lower Merion Historical Society recounts, the PRR also insisted that many of its executives move out to these new suburbs and commute to Philadelphia. Moreover, the railroad changed the names of several towns, including Humphreysville (to Bryn Mawr), Athensville (to Ardmore), and Elm (to Narberth). 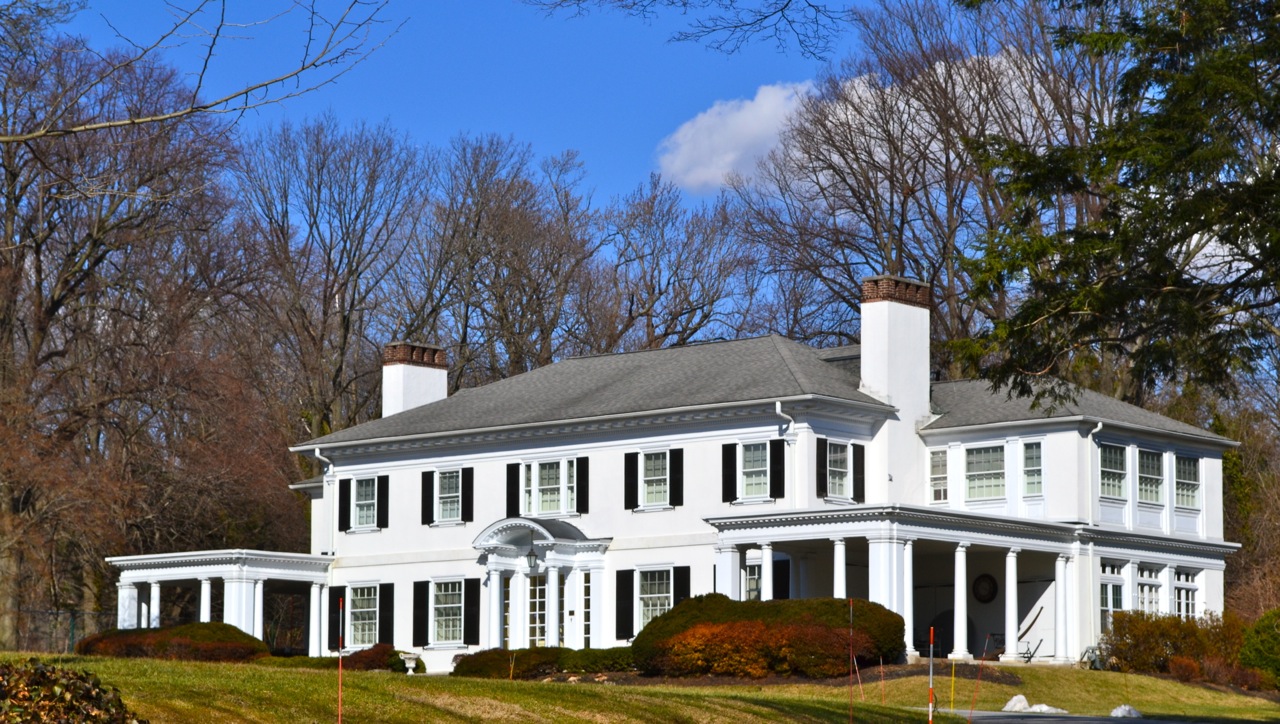 ©Casey Murray
A typical style of home for the area, this property is located between Merion and Narberth.

These estates and their residents have come to define the Main Line. But what does that mean? With the birth of the Main Line in the late 1800s, there also came “an extreme type of class-consciousness. The flood of wealth that created American family fortunes in the late 19th century settled around a handful of cities and was expressed in different forms of conspicuous consumption and elaborate social behaviour,” writes Ian Irvine in the Sunday Telegraph. Irvine compares Manhattan’s Upper West Side to Philadelphia’s Main Line to call attention to the grandeur associated with the area; but that’s where the similarities end. “In more traditional… Philadelphia, however, society turned almost feudal, almost English in its attitudes – ‘old’ money and ‘old’ families counted for everything. The very term WASP (White Anglo-Saxon Protestant) was coined to describe members of Philadelphia society,” a term popularized by University of Pennsylvania professor E. Digby Baltzell. And an appropriate term it was.

No one captured the true essence of what it meant to be a Main Liner quite like Hope Helen Montgomery Scott, once proclaimed by Vanity Fair as“the unofficial queen of Philadelphia’s WASP oligarchy.” She was the inspiration for Philip Barry’s 1939 play The Philadelphia Story. Katharine Hepburn played Tracy Lord Haven (Scott) in The Philadelphia Story on Broadway and in the 1940 film. Later Grace Kelly reprised the role in 1956’s High Society. The late socialite and self-proclaimed party girl was born into one of Pennsylvania’s oldest and most prominent families in 1905. When she wasn’t hosting lavish affairs at Ardrossan, she was said to have spent her time dancing the foxtrot with the Duke of Windsor, partying with Adele Astaire (sister and first partner to legendary dancer Fred), dining with Sir Winston Churchill, and having her portrait painted by Augustus John. “‘He was madly in love with me,’ she once told an interviewer,” Ralph Cipriano recounted in an obituary. 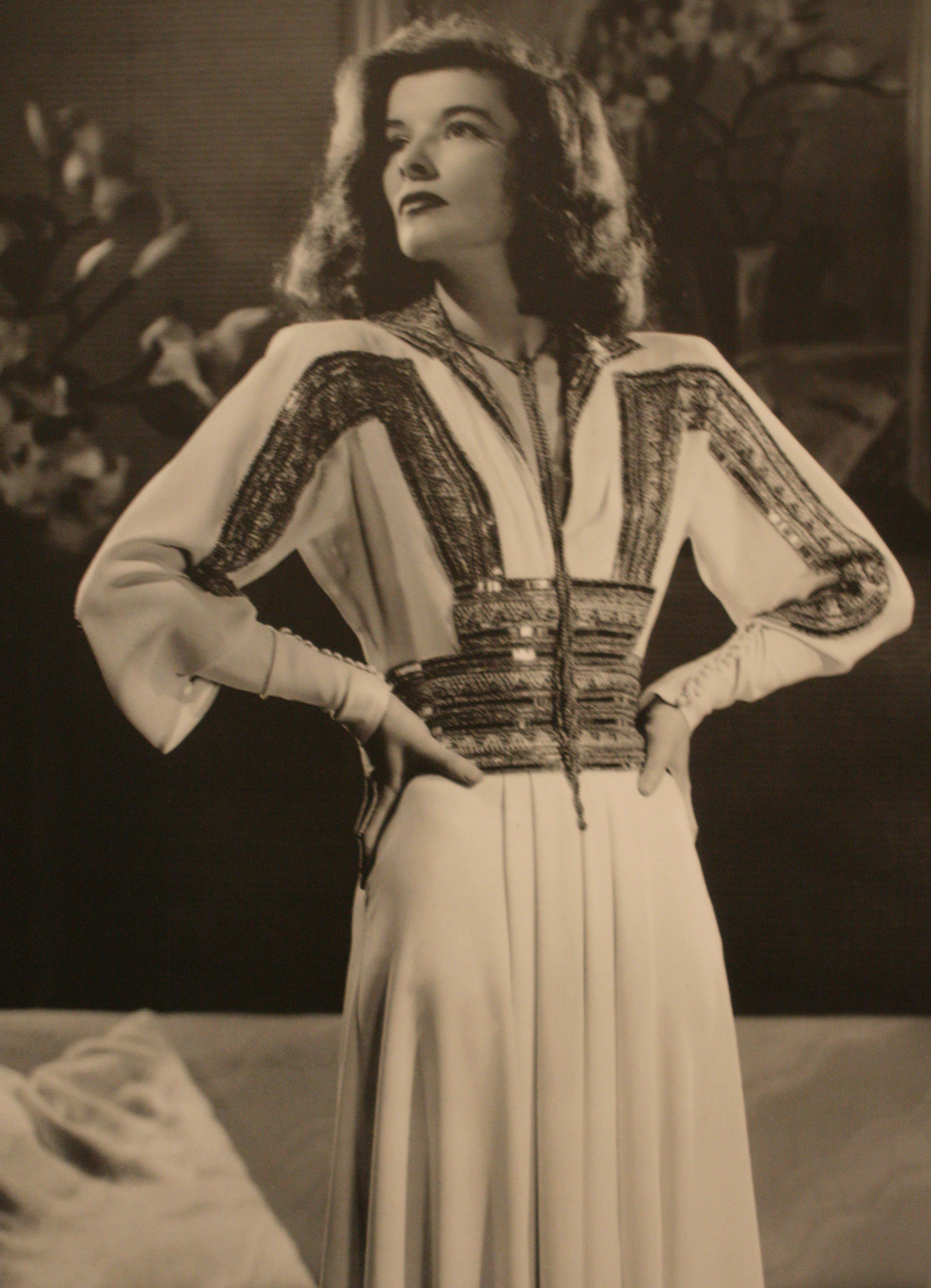 ©DBKing/Flickr
A portrait of Katharine Hepburn featured in the National Portrait Gallery's 2007 Exhibit "One Life: Kate; a Centennial Celebration"

Scott impeccably displayed the Main Line’s ability to be simultaneously both understated and extravagant. Despite being continuously named one of the Best Dressed Women by New York Couture Group, she spent her free time either at the stables becoming an accomplished equestrian or tending to her prize-winning cattle. In 1922, she debuted at the Philadelphia Assemblies Ball, “the oldest and most exclusive social gathering in the United States,” where she received four marriage proposals that night, none of which she accepted. Not long after her debut, she married Edgar Scott, heir to the PRR fortune.

Just as Scott represented the Main Line, so did the very same Philadelphia Assemblies Ball at which she made her debut. The importance of tradition to the area cannot be overstated, and this annual event proves it, for “Tradition is the underlying theme of the Assembly Ball, the oldest continuous subscription dance in the country,” as Mary-Virginia Geyelin put it in the Philadelphia Inquirer. An unfamiliar concept to most, sociologist G. William Domhoff describes the dances:

The debutante season is a series of parties, teas, and dances, culminating in one or more grand balls. It announces the arrival of young women of the upper class into adult society with the utmost of formality and elegance. These highly expensive rituals, in which great attention is lavished on every detail of the food, decorations, and entertainment, have a long history in the upper class. Making their appearance in Philadelphia in 1748 and Charleston, South Carolina, in 1762, they vary only slightly from city to city across the country.

First held in 1748, the Philadelphia Assemblies Ball was said to be one of the most “aristocratic balls in the United States,” inviting only the best of the Philadelphia elite. According to historian Nathaniel Burt:

[The] Philadelphia Assembly…is probably still the most august of America’s social occasions…. Admission to the Assembly is, or is supposed to be, strictly hereditary in the male line. That is, sons and daughters of members are eligible, though not automatically, when they reach a proper age. If a daughter marries out of the Assembly, she stays out. A son however can marry anybody and stay in.

The ball was already held in such high regard, that President George Washington attended as a guest when Philadelphia was the national capital. 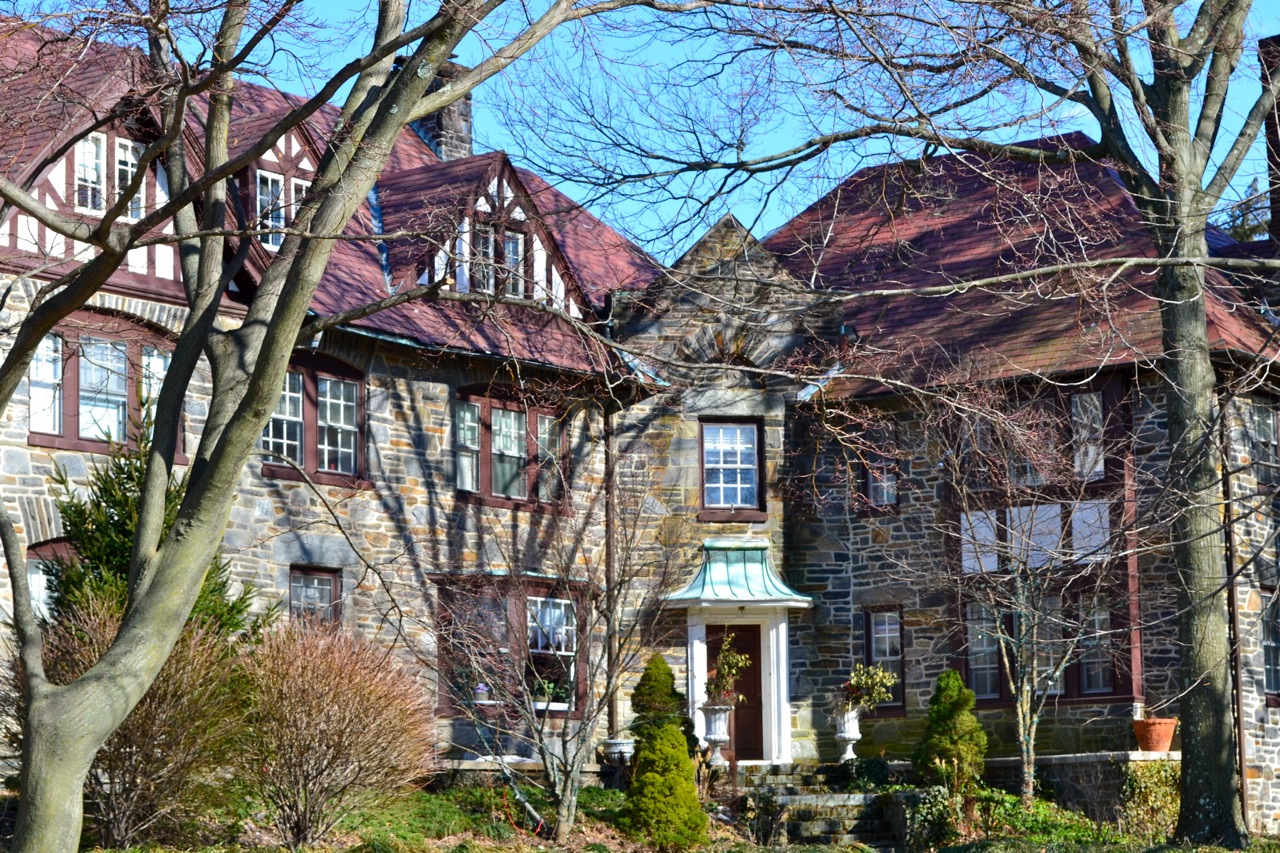 While the Main Line is a place of great wealth, it’s also a place where blood and familial ties mean everything. Only the members of the most prominent Philadelphia families and their guests are invited. Unlike other notably wealthy enclaves around the country, no amount of money could buy entrance to this esteemed social registry, as proven by Grace Kelly, Philadelphia’s very own princess.

Despite being one of the most famous Philadelphians even to this day, an Academy Award-winning actress, and having become a real-life princess, Kelly would never belong to the same high Main Line society as Helen Hope Montgomery Scott. Not only was Kelly Irish-American, but her father had come from modest means. Irvine states:

Kelly later revealed to her friend Judy Kanter that it had been one of her dreams to “come out” as a debutante at the Philadelphia Assemblies Ball in a white dress and elbow-length white kid gloves, as Hope Montgomery had. But that had been an impossible fantasy.

As the late Princess’ biographer, Robert Lacey, observed, she...

...was an outsider, an excluded observer of a world that was held to be the ultimate in terms of class and privilege - which may be one reason why she made such a good job of mimicking the style and customs of that world in her later life. 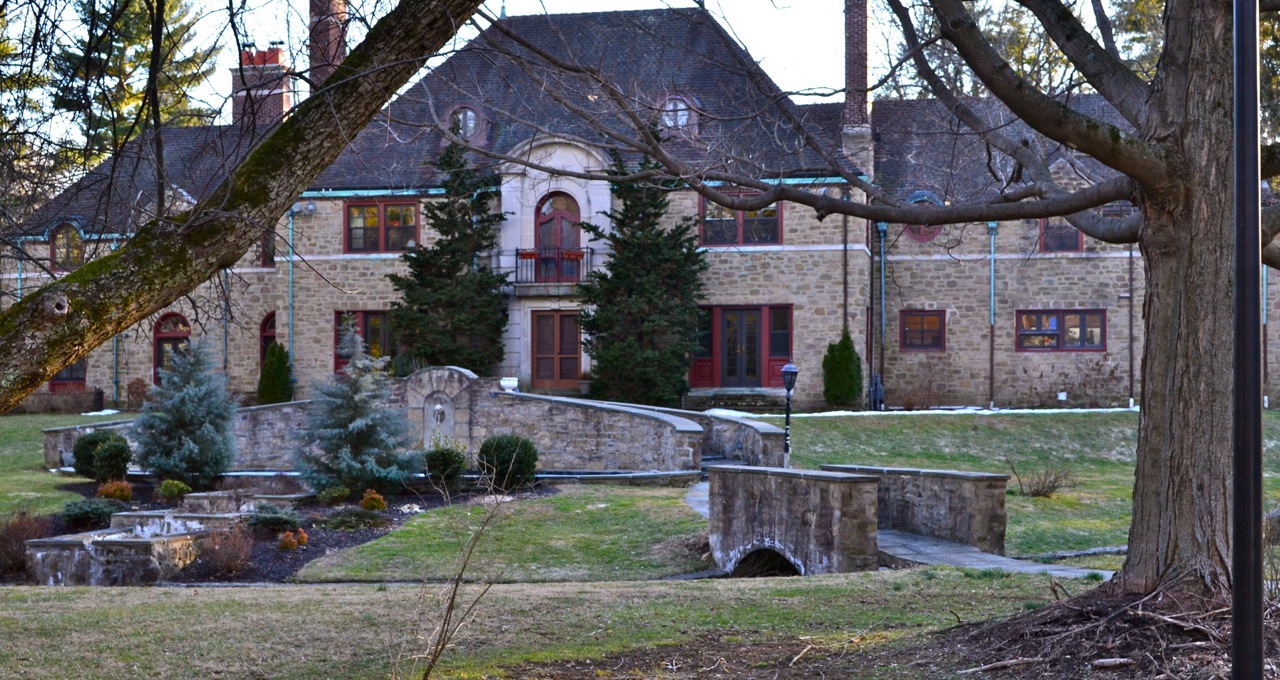 ©Casey Murray
This elegant estate is located in Wynnewood, PA.

While debutante balls aren’t nearly as prevalent as they were years ago in the Main Line, where tradition is king, they still take place yearly. Nowadays not every Main Liner may live like a Scott, but the expectation to act like one endures. As Betty Feeney and Julia Lorenz Gaskill noted in 1955: “the Main Line is a way of life which both its natives and newcomers tend to view as the best this side of Paradise.”