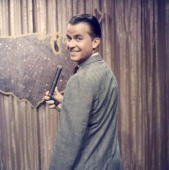 The year is 1959 and Studio B in West Philadelphia is packed with anticipation. Dick Clark is about to announce the next act on American Bandstand, "Is there anyone in the house who knows where Dion and the Belmonts are?" he asks, pointing the microphone at a young, plump girl in the audience wearing spectacles and a nervous jitter. A few seconds later, three googly eyed, clean cut young men appear on the screen, do-woping to the audience as they repeat over and over, "Why must I be a teenager in love?"

American Bandstand is a substantial part of the larger social movement that created a separate and distinct youth culture, and by the time Dion and the Belmonts had performed on the show, American teenagers may have been infatuated with the teen idols, but they were head over heels in love... with Bandstand itself. "When we started the show in '52, there weren't any teen-agers," host Dick Clark recalled in a 1977 Washington Post interview. "They were just miniatures of their parents. They didn't have their own styles, they didn't have their own music, they didn't have their own money. And now, of course, the whole world is trying to be a kid." He was right; after all, the word teenager only originated in the 1950's. The relationship between music and romance has always created a spark, and it was the City of Brotherly Love that sparked the relationship between music and television. The show gave teenagers to the 50's, and a soundtrack to the Love Generation of the 60's, as well as a platform to sound off on; it made the music matter, and the adults were tuning in and taking notes.

For the majority of its run, American Bandstand was hosted by Dick Clark, often called America's oldest teenager, who made Rock and Roll "safe" for mainstream American living rooms. It was the longest running music show in ABC history, a phenomenon that ignited a lasting relationship between youth culture and music television. 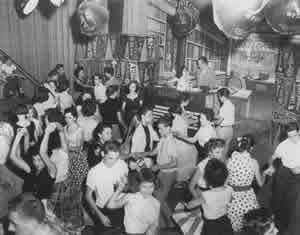 ExplorePAHistory.com
Temple University, Urban Archives
Back when it was Bob Horn’s Bandstand: Bob Horn spins records during the show's embryonic stage in 1955.

The merging of music and television began in 1945 in Philadelphia. The city's pop radio at the time was dominated by two stations, WPEN-AM (950) and WPI-AM (650). But it was WPEN, hosted by DJ duo Ed Hurst and Joe Grady, that thrived with the 950 Club, that station's most popular show. It was the first in radio history to invite a studio audience to come down and boogie to the music being broadcast live on air. The show focused on a different high school every day, and the studio would soon become the melting-pot for some mischievous teenage angst. Hurst recalled that the hormonally challenged "ran wild" and "created a problem for the tenants of the building" which eventually got WPEN "kicked out."

The station soon relocated, and the 950 crew had a new home, a nearby location fully-equipped with a dining area, hoagies and hot dogs to satisfy the taste buds of the bobby sock and poodle skirt crowd. Grady and Hurst spun hits, interviewed the top names in music, and encouraged teens to give "shout outs" to their high schools. It soon became the number one radio show in Philadelphia, but rival station WPI was about to steal the 950 crowd for itself with the help of its veteran DJ, Bob Horn. Horn developed a similar show for WPI radio, Bob Horn's Bandstand, and, while the show had a similar formula, it did not achieve the ratings success the 950 Club had achieved. As fate would have it, during the summer of 1952, the FCC ended its four year ban on the establishment of new TV stations, and the network abandoned radio in favor of TV.

As a result, the ABC- affiliated station combined its radio and TV facilities into one unit, located in a humble brick building on West Philadelphia's 46th and Market Streets. WFIL's program manager hired Horn to bring his radio show to TV, a move that would eventually make Philadelphia the pop music capital of America.

"I knew it was a hit immediately," said Charlie O'Donnell, WIBG-AM news director at the time, better known today as the host of Wheel of Fortune. "You felt it. You had to rush home to watch Bob Horn if you wanted to know what was happening in music." Horn hosted the show for four years until he was arrested for drunk driving, bad timing considering the station was in the middle of an anti-drunk driving campaign. Horn had a loyal, local and vocal audience base at the time, and a crowd of angry teens protested Horn's arrest, causing a huge uproar outside WFIL studios. "A lot of people were upset when Bob Horn stepped down from hosting Bandstand," said Lew Klein, executive producer of American Bandstand during its Philly run.

Another WFIL DJ, all-American and clean-cut Dick Clark, took over for Bob Horn on July 9, 1956. Clark was twenty-six at the time, and would later recall the protests, "the protest leader was a kid named Jerry Blavat," he recalled. Blavat eventually became a local Philly DJ himself, known as "Geator With the Heater," but even Geator could not stop the Bandstand machine. Clark's handsome boy-next-door looks and on-screen charisma are synonymous with American pop culture today, and his "eternally youthful" persona made him a celebrity in his own right, overriding Horn's initial affiliation with the show.

It only took a year after Clark became host for Hollywood to catch on to the local Philly sensation. After ABC took Bandstand under its corporate wing, the first national show aired on August 5, 1957. Long before Proactive and MTV's Carson Daly, Clark was like a big brother to America's pizza-faced teenagers, and while the show did not clear anyone's complexion, it gave radiance to the complexion of America's emerging youth culture. 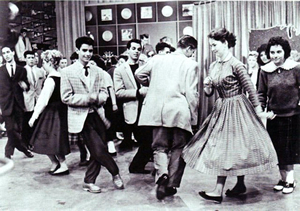 "Everyone has a different impression from the show, it presses a different button for everyone," he said. "They might identify with different songs, different hairstyles, different clothes of the times. Those were the days of Eddie Fisher, Perry Como, Doris Day... very early pop music, before rock 'n' roll." Clark was referring to artists such as 50's teen icons Jerry Lee Lewis, the first artist to perform on Bandstand, and Philadelphia's own Frankie Avalon, a regular on the show. He would go on to describe the 50's as "that wonderful time when nothing ever happened." And he was right; everything seemed simple in the 50's as the economy thrived, divorce was rare, and the government was a friend. Given this mindset, rock 'n' roll was not welcomed by everyone during the 50's: it represented a need to break free of the institutional handcuffs. It was the soundtrack of an emerging youth culture, an anti-government, anti-church, parents-just-don't-understand, anti-establishment movement.

A need for independence came along with the swingin' 60s, and Americans were fighting in Vietnam as well as for women's lib and civil rights. The music reflected the rebellious mood of the time, and the establishment frowned on rock 'n' roll early on. It was not until the 1960's that the drug culture began to form and the establishment was more accepting of rock 'n roll. "Rock and Roll music was emerging, and it was the language of a generation," said Robert Thompson, director of the Center for the Study of Popular TV at Syracuse University. "American Bandstand ... became in many ways the national delivery system of a subculture into mass American culture. So that enormously powerful thing gets dropped into the cultural landscape, and it's a phenomenon from Philadelphia."

Dick Clark's wholesome image remained consistent throughout the changing times, which helped soften the previous "dangerous" reputation of rock 'n' roll. Despite 1950's opposition, he is praised today for "providing a platform for African American artists," and making American Bandstand one of the first racially-integrated shows in America. "Philadelphia in those days was the northernmost Southern city in the country, and it was highly segregated," Clark told CNN's Larry King in an interview. "Black music was race music. We had all white dancers. And then the producer sat down one day, and with no direction, no instructions, no memos, no, you've got to do this, said, you know, the music is so integrated, maybe we ought to invite some black kids in to mix it up a little bit."

Clark interviewed the first African American teen on the show in its viewers' choice segment, Rate-a-Record. When the host asked the teen what he thought of the record, he responded with a trademark response on the show, "I like the beat and it's easy to dance to." It was that simple. But Clark nervously anticipated the network's response; "When I got off the air, we ran to the offices, has there been any reaction? Have we gotten any phone calls? We waited a few days to see if we got any mail. Nothing there, nobody cared." Indiana University music professor Glenn Gass told USA Today that it was largely Clark's wholesome, all American image that gave rock and Jazz music a sanitizing effect, "Clark had a respectful presence in a jacket and tie, and he was able to bring music that some parents found scary into suburban homes. American Bandstand made rock 'n' roll safer for young ears and eyes." 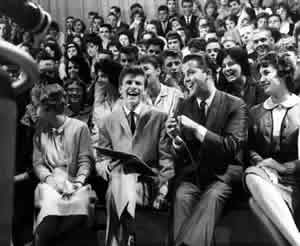 When Clark interviewed big-name-musicians, he was capable of appearing inferior to them despite his growing celebrity persona, remaining a fan first and foremost. He pulled it off well with a humble, reassuring smile that whispered to parents that everything would be okay. American teens admired and trusted him enough to let him pave the way to what was socially acceptable. "Sure, my recognition factor is high," he told the Boston Globe in 1992. "I get comments from cab drivers, kids and little old ladies who say, I grew up with you." And what a great time to grow up during! Bandstand was a platform for the biggest names in music, and teens would run home to artists such as Smokey Robinson, Carol King, Buddy Holly, Paul Anka, Little Richard, Chuck Berry and The King himself, Elvis Presley, who all performed their latest hits on the show.

Bandstand itself experienced a makeover of its own during the 60's. On September 7, 1963, the show switched from airing daily to airing once a week on Saturday afternoons. Then, in 1964, filming moved from Philadelphia to Los Angeles. American Bandstand had finally been accepted by popular culture as a legendary staple. The longest running music program in ABC history was eventually cancelled in 1987, when Clark refused to cut the hour long show to 30 minutes. The show lasted throughout the 80's, until it was replaced by MTV and VH1, channels initially dedicated to music channels that stole the momentum from Bandstand's appeal as well as its target audience.

Today, the brick building on Market Street is listed in the National Register of Historic Places. An 11-foot-by-30 foot mural of Clark and original host Bob Horn is located in the same place the show aired, establishing the building as a landmark, immortalized in television and music history. The City of Brotherly Love was where its roots and glory days lay, and many older fans claim the show lost its stamina when it turned "Hollywood." The glory days of American Bandstand are often recalled with nostalgia of a time when the criteria was simple: just as long as the beat was good, and it was easy to dance to.