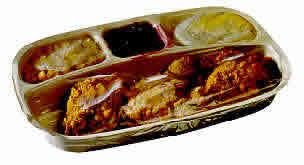 Have you ever been sitting at home, relaxing on your couch eating a TV dinner? If so you are not alone; TV dinners make about $4.5 billion in sales per year. TV dinners have saved millions of people hours of slaving away in the kitchen for a nice hot meal. Walk down any supermarket freezer aisle today and it will be dominated by pre-made meals ranging from pasta to individual pizzas, from the ethnic flair of curry or enchiladas to traditional meat and potatoes combos. Major players in bringing these meals into supermarkets and homes were Pittsburgh natives the Bernstein brothers.

The invention of the TV dinner, or frozen dinner as some call them, is credited to Clarence Birdseye in 1923. With only $7.00, Birdseye invented a packaging system using an electric fan, some buckets of brine, ice, and a few boxes of fresh fruits. He later came up with an invention in 1926 that was first used to freeze fish, which led to the freezing of items such as vegetables, meat, and fruit.

During World War II, Maxson Food Systems, Inc. developed an invention called “Strato-Plates,” which contained meat, vegetable, and potato portions, each item in its own compartment in the tray. These meals were only served on military and civilian flights that crossed over the Atlantic Ocean, as some of the flights lasted up to six hours. Fresh foods, such as cold sandwiches, were used before this, but it became clear that these frozen dinners were a more economical way to go. They could last much longer, and if not all was eaten, the meals could just be heated up later. After the war was over, Maxson Food Systems renamed their “Strato-Plates” as “Sky Plates” and tried to market them to the public. The company planned to set up plants in Chicago, Kansas City, Los Angeles, and elsewhere. These meals however never ended up being distributed to the retail market due to lack of resources and the death of their founder, William Maxson. 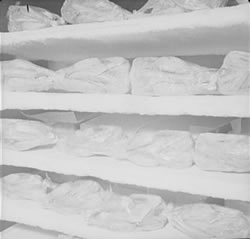 John Collier, Library of Congress
Shelves of frozen chicken, like these were needed in the Food for Defense program which fed troops during World War II.

Jack Fisher, of Philadelphia, replicated the frozen dinner model used by Maxson Food Systems, Inc. and tried to market them more to the public. In 1947, he created the company, FrigiDinner, Inc., which sold frozen dinners in bars, taverns, trains, and airplanes in Pennsylvania and Ohio, but they would not be sold in grocery stores until 1955.

After the moderate successes of Maxson Food Systems, Inc. and FrigiDinner, Inc., came the larger success of Albert and Meyer Bernstein of Pittsburgh. They saw the success that could be made from frozen dinners, but they would make it a much more profitable business. The Bernstein brothers are the first to be credited with the distribution of the frozen dinners into retail markets. This distribution was somewhat foreseen as the home market was untapped. A 1947 Popular Mechanics article predicted that frozen dinners would be sold in hotels, ships, factories, and probably even grocery stores. The Bernstein brothers however were the first to make the successful transition into American homes and were the catalysts for the frozen food market.

Albert and Meyer Bernstein used the basic design of the tray that was used previously by Maxson Food Systems, Inc. but used aluminum trays instead of plastic trays. They maintained the system of using the three different compartments for the different portions of food, but they had a more unique product offering. At first they offered only five different types of meals; however, their menu included foods such as Salisbury steak, mashed potatoes au gratin, beef pot roast, and candied sweet potatoes. They would eventually have as many as 40 different types of frozen dinners, expanding upon the varieties offered by previous manufacturers. The earlier Maxson dinner, for example, only contained simple items such as ham, applesauce, lima beans, spinach, and hamburger patties.

According to the Practically Edible Encyclopedia, the brothers first started out by distributing the dinners only in the Pittsburgh area and charged customers anywhere from 59 to 89 cents each. Since the brothers were originally from the area, they knew it very well and were able to take advantage of the monopoly that they had with these frozen dinners. In 1949, they formed a company named Frozen Dinners, Inc. calling their meals a “One-Eyed Eskimo.” 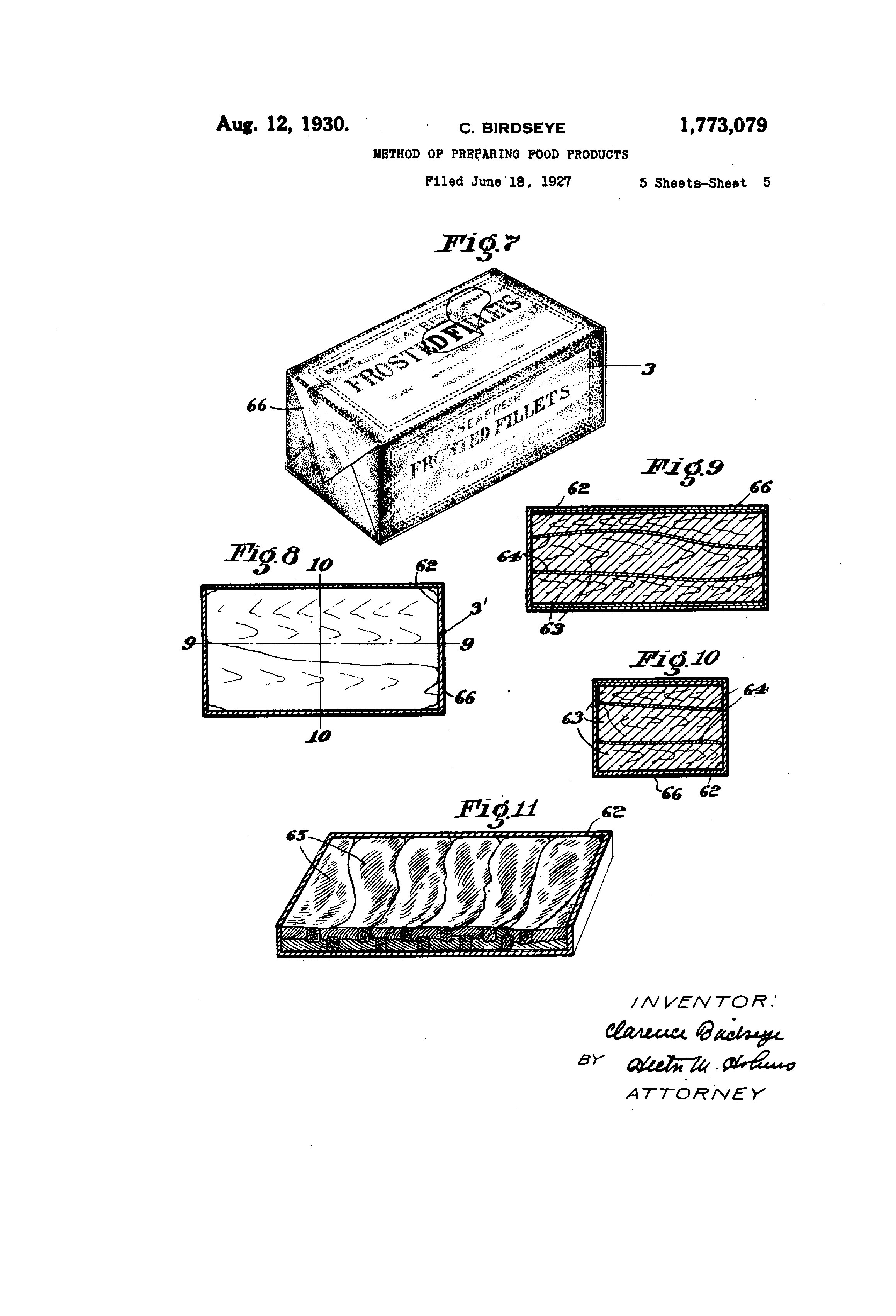 U.S. Patent and Trademark Office
Technology for freezing food and preserving it well was patented by Clarence Birdseye.

By 1950, they had already sold over 400,000 dinners in retail stores in just the Pittsburgh area. The dinners were at first widely popular with women who were ecstatic that they wouldn’t have to work away in the kitchen every night. On many occasions they could just pull a meal out of the freezer or ice chest, heat it up a little and they would have a meal for their family. There were a few who were not fond of the new frozen dinners, thinking the meals lacked some variety and flavor. Although it did taste better than the old frozen dinners, consumer tests showed they still were not of the quality of home cooked meals.

Although these meals were quite simple in nature, the effect that they had on postwar America was significant. As more women began to enter the workforce, less time was spent on chores such as cooking and cleaning, and more was spent making a living. Frozen meals became a staple of the American lifestyle because they were great time-savers for those who did not have the time to prepare home-cooked meals anymore. And with the Baby Boom, working families had plenty of mouths to feed but less time to cook.

Frozen dinners were a great way to save families time because wives were spending more time away from home. The entrance of frozen dinners into millions of American homes offered an affordable, easy-to-clean-up meal, as the frozen dinner tray could simply be thrown away after the meal was finished. As the entertainment industry began to boom, Americans were also looking towards the more convenient lifestyle that would offer them more free time in front of the newly-popularized television for instance. This led to the frozen dinners later being known as “TV dinners.”

Some people complained that frozen dinners were hurting family bonding since frozen dinners began to be eaten in front of the TV or by the radio. It is hard to say what role frozen dinners had in the decline of the sit-down family meal, but society was changing greatly at the same time. If they did help lead to a decline in meals eaten at the dinner table, the family was still eating side by side, watching new shows like, I Love Lucy, American Bandstand, or the highest-rated show, The Texaco Star Theater.

Despite these complaints, the Bernsteins’ company continued to boom. They soon realized that it was time to expand and were finally able to do so in 1952. They became the Quaker State Food Corporation and expanded across the country. They continued selling these frozen dinners until around 1957 as C.A. Swanson & Sons came in as competitors with their Swanson “TV Dinner.” Swanson launched a massive advertising campaign in 1954, which eventually led to the downfall of the Bernstein brothers’ company. By 1956, Swanson had sold around 13 million frozen dinners per year with their effective marketing campaign. Quaker State’s frozen dinner cost ninety-eight cents compared to Swanson’s 20-cent meals, which also used their “TV dinner” campaign to take full advantage of the television boom. 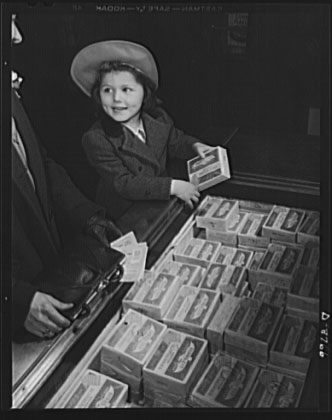 Alfred T. Palmer, Library of Congress
Eating frozen food purchased with ration stamps (held by the mother in this picture) became much more familiar to the public during World War II.

There is much debate about who actually coined the term “TV dinner.” The Frozen Food Hall of Fame credits Gerry Thomas, who worked with C.A. Swanson & Sons as a salesman in 1953. Betty Cronin, who was working as a bacteriologist for the Swanson family said that Gilbert and Clarke Swanson were the two that came up with the concept of the TV dinner, as it is widely known today.

Although the naming of the product is debated among historians, what truly matters in regard to frozen dinners is that they made a difference in the lives of millions by creating more time for the people who used them. Frozen dinners helped to improve the lifestyles of Americans by giving them more time for work, friends, family, and fun.

There were many who were a part of the original frozen dinner and many who followed. Although the first frozen dinner was created in 1923 by Clarence Birdseye, without the first distribution into the retail market by the Bernstein brothers, no one would have heard of a frozen or “TV dinner.” From their location in Pittsburgh, the Bernstein brothers truly revolutionized American culture by something as simple as a frozen dinner in a tray. All it took to change society was an aluminum tray, three slots with food, and some cellophane covering.

The Bernstein brothers were able to take their predecessors’ ideas, and they found a way to make it in the retail industry, unlike those before them. Their short-lived success continues to pay off today, as frozen dinners are still a large part of American culture. TV dinners continue to help out the millions that may not have the extra two hours to cook a home-cooked meal every day. Society is changing rapidly, yet the frozen dinner remains.

Pittsburgh is famous for its steel, bridges, rivers, and sports teams, but few know that this city was at the forefront of the frozen dinner revolution that soon swept across the country, changing the way Americans eat. So the next time you are sitting back, relaxing on your couch after a hard day’s work eating your TV dinner, you can thank Pittsburgh’s own Bernstein brothers.