Pizza Capital of the World

Caroline Strasser
Old Forge boasts of being the "real" pizza capital of the world.

When it comes to the best pizza to be found, most people are quick to side with either New York style or Chicago style as the finest. Residents of one borough in northeastern Pennsylvania, however, would argue that both fall short of their own style. Nestled between two mountain ranges in a place unfamiliar to most, Old Forge—located in the southern portion of Lackawanna County—proudly declares itself the “Pizza Capital of the World.” Boasting original family recipes, a “like home” atmosphere where “everyone knows your name,” and a unique, unmatched taste, Old Forge has certainly made a name for itself in the community of pizza lovers.

A trip down Main Avenue in Old Forge is the first clue that this tiny borough takes their pizza reputation seriously. Decorating both sides of the avenue are family restaurants, such as Arcaro & Genell’s, Revello’s Pizza Café, and Salerno’s Café, all proudly advertising their original blend of cheeses and sauces that make their pizza stand out amongst the rest. In fact, so many pizzerias are present that the ratio of citizens to restaurants is approximately 700 to 1. In addition, signs are displayed throughout the borough, which clearly label Old Forge as the Pizza Capital of the World.

Inside most of the restaurants in Old Forge is a similar set up: a dimly-lit dining area with aged wooden tables and chairs, a few wooden booths along a wall, a bar where the food is just as important as the drinks, and memorabilia covering the walls, celebrating the history of both the restaurant and Old Forge. Present among all of this is a swinging door, which with each swing open gives a shot of bright light and the aromas of cheeses, sauces, and dough coming together as the town’s signature pizza. All of this creates the homey feel the restaurants aim for; they want you to come in to enjoy the food and the company.

Jennifer Snyder
Arcaro and Genell are just one of numerous establishments in Old Forge making this local staple.

This atmosphere has almost always been present throughout the long histories of the restaurants. The restaurants were not just meant to be a place to eat, but a place for miners to seek refuge from the hardships of their lives. This was needed more than ever in the late 1940’s, following World War II. Old Forge and surrounding communities relied heavily on the abundance of coal and the work associated with it. As the nation began moving away from coal, jobs began moving away from the area. The large immigrant population of the area had little else, so they would turn to their favorite restaurants and enjoy a tray of pizza.

The earliest story of a restaurant in Old Forge serving pizza dates back to the 1920’s in Ghigiarelli’s Restaurant. Locals claim that after a full day of work, a group of miners headed to the restaurant to play cards and get something to eat. “Grandma” Ghigiarelli, as she was commonly known, answered their call by filling a baking tray (not the traditional circular pizza pan) with dough and topping it with tomatoes, cheese, and spices from the garden. After a short time in the restaurant’s brick oven, Grandma Ghigiarelli served the miners, much to their delight.

Restaurants throughout the community began to take notice of Ghigiarelli’s pizza, and began making their own unique recipes to attract the miners and other workers. Wives and daughters would spend their days at the restaurants making trays of pizzas and by nightfall, their hungry family and other workers would come in ready to enjoy the meal. While every restaurant had its own blends of cheeses or mixtures of sauces, they all kept two ideas in mind: always get the crust just right, and always bake the pizza on a rectangular tray.

As time progressed on, certain recipes of pizza became more popular than others. Some varieties call for more sauce, some for more cheese, and some with specific toppings (such as “black” pizza with cheese, black pepper, olives, and anchovies). While everyone has their own taste preferences, the most popular types to be found in Old Forge are the “red” pizza and the “white” pizza. 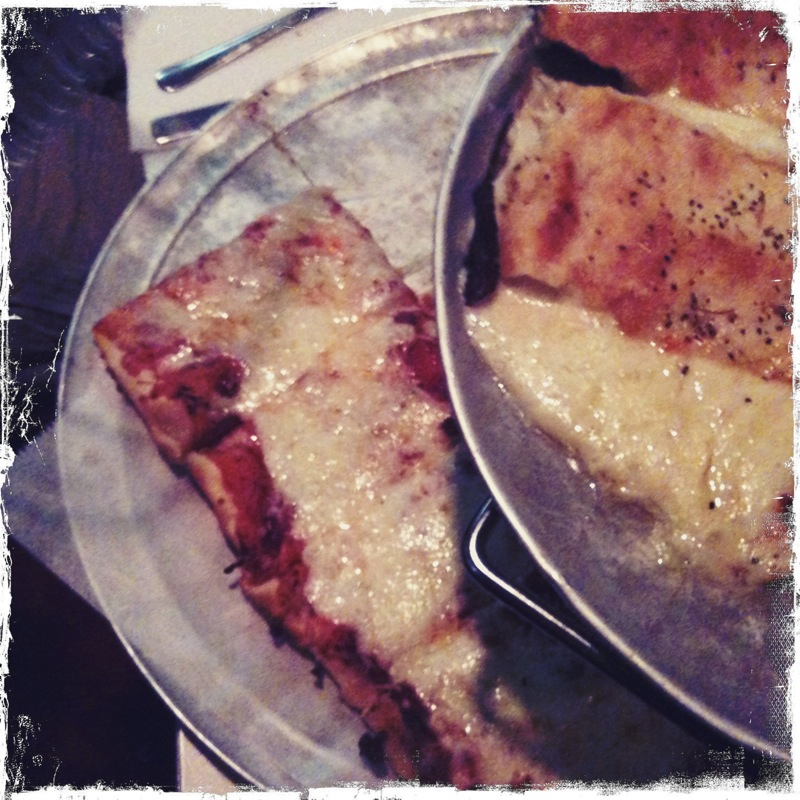 Red pizza starts with dough intended to rise to be about an inch thick. Spread on top of that is the restaurant’s homemade tomato sauce, which is then covered by a unique cheese blend and topped off with spices. White pizza recipes skip the sauce, instead opting for a thicker, “double crust,” a slightly different cheese blend, and a coating of olive oil sprinkled with rosemary. While the recipes vary, both adhere to the same Old Forge pizza standards: the crusts must be just right, light and airy, and they must be baked on a rectangular baking pan, nothing else.

One of the most engaging questions people ask about the pizza, no matter the variety, is what makes it so good? Andy Sopp, who has been making pizzas for over 40 years at Revello’s Pizza Café claims, “It’s the cheese blend.” What makes up any cheese blend found in Old Forge remains somewhat of a mystery. Most restaurants guard their blend, as it is what makes their pizzas their own. Many customers speculate that the blends consist of American cheese, Monterey Jack, Provolone, and Scamorza (referred to locally as “scamutz”). Absent from most of the blends is mozzarella, traditionally found on pizza outside the valley. Nonetheless, the cheese on the pizza is still praised. One customer of Revello’s shared, “The cheese is extremely gooey and flavorful, the kind that sticks to your teeth (in a good way).”

It seems every restaurant leaves customers pleased and coming back for more pizza. Whether it is the red, with its bold sauce, or the white, with its delicious crust, many come from near and far to enjoy the pizza. One notable customer is politician Hillary Clinton, who has stopped in Old Forge to enjoy some pizza while campaigning in Pennsylvania. One pleased customer said that the restaurants have a “‘Hometown’ feel,” and added, “I have been going here for 12 years and much hasn’t changed in those 12 years.” That is what the entire Old Forge community strives for: a hometown feel with great food.

The hometown feel is no more apparent than with the way all of the restaurants interact. Having the best pizza in the Pizza Capital of the World might seem like a lucrative title, but many of the restaurants remain highly co-operative and friendly to one another. Owners are friends with other owners and everyone will go to each other’s restaurants, some restaurants even advertise together. This may be that many of the restaurant’s founding families can trace their history back to Felitto, Italy, or just because the restaurants want to be part of a better community. Many workers are modest when asked which restaurant is best. Pat Revello, owner of Revello’s Café, says, “It’s really a matter of taste.” Travel writer Jill Dougherty of CNN notes, “No one is ‘best,’ they’re all ‘the best.’” 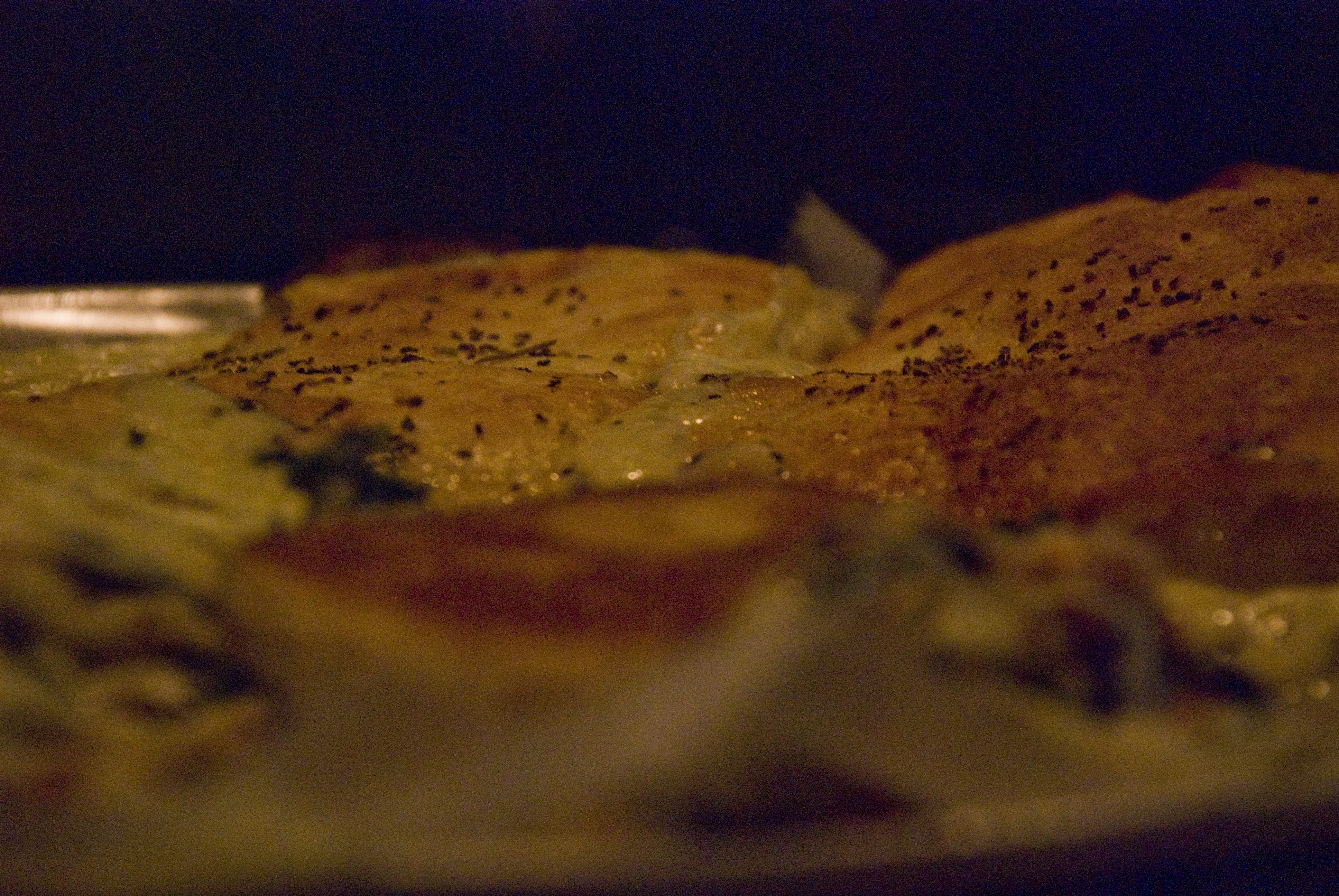 With all of the restaurants in Old Forge being at the top, it is clear why this community truly is the Pizza Capital of the World. When the best pizza is asked, New York and Chicago may always be the first mentioned, with little thought of Old Forge. When the question of the best pizza community arises, Old Forge will always be at the top. With a hometown feel, friendly service, and delicious pizza found nowhere else, it is clear that Old Forge really is the Pizza Capital of the World.