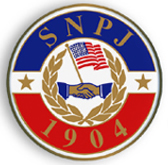 State laws in Pennsylvania require boroughs to maintain at least 500 residents in order to remain in existence, but for one Lawrence County borough, 14 is just enough.

Not much has changed since the 0.7 square mile borough of S.N.P.J. was founded in 1977, when only 13 residents called the North Beaver Township borough home. As of 2000, S.N.P.J. officials counted a population of 12 adults and two children, although the census taker that year mistakenly recorded the population as zero because not one of the 14 residents was home at the time of her visit. Next to the borough of Centralia, home to the underground mine fires, S.N.P.J. is the smallest borough in the state of Pennsylvania.

Though it may be the smallest borough, S.N.P.J. is owned by the largest Slovenian fraternal benefit society, the Slovene National Benefit Society. Founded in 1904, the Slovene National Benefit Society (or its Slovenian name, Slovenska Narodna Podporna Jednota, for which the municipality is named), like other ethnic benefit organizations of the time, was created for the primary purpose of providing affordable life insurance to Slovenian immigrants, though according to the S.N.P.J. website, in addition to life insurance policies, it now offers "a full package of social, athletic and cultural opportunities, along with college scholarships, community service projects and much more." With no social security, health insurance, or (perhaps most importantly) cultural support upon arriving in the United States, immigrants turned to fraternal benefit societies for help in establishing new lives in a foreign country while maintaining their ethnic identities. Due to polarized political affiliations and a scattered Slovenian immigrant population, many Slovenian societies were organized throughout Pennsylvania in the early 20th century. 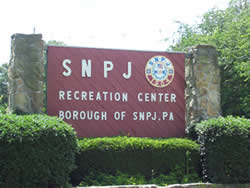 Christopher Cadez, Webshots
A Welcome Sign at the entry to the SNPJ Borough and Recreation Center.

In an effort to unify the Slovenian populations in the Pittsburgh and Cleveland areas, in 1966 the Slovene National Benefit Society made the decision to purchase the land that now constitutes S.N.P.J borough. The 500 acres that make up the borough's recreation center serve as a social and cultural haven for local Slovenian-Americans to preserve their ethnic heritage and keep cultural traditions alive. Despite its diminutive residential population, with a 20-acre lake, an Olympic size pool, 60 cabins, a playground, numerous athletic venues, campgrounds, and trailer accommodations, today S.N.P.J. is a popular vacation spot for society members.

For such a small borough, the secession of S.N.P.J from North Beaver Township was one embroiled in relative controversy. Though according to S.N.P.J. headquarters, secession was necessary in order to ensure that the community could "develop at its own pace and remain free from outside influences," the motivation behind its creation is perhaps most well-known for another reason: to secure a liquor license in an otherwise dry township. According to local news articles, the society petitioned to secede in 1977 for the simple fact that they were losing money on their North Beaver Township property—$70,000 in 1976 alone, to be exact. From its inception, S.N.P.J.'s 500 acre recreation center on the property was known for its festivals and banquet facilities, so naturally a liquor license had the potential to dramatically increase the revenue collected from each event. Local residents opposed the society's extreme proposition (citing concerns about tax collection); however, on July 26, Common Pleas Court Judge John F. Henderson legitimized S.N.P.J.'s land as an independent borough.

To this day, the borough has no ordinances and collects no taxes. It uses septic systems instead of municipal sewers, has only one road, and relies on North Beaver Township for fire and police protection, minimizing the need to levy taxes on its handful of residents. In fact, most society members don't even actually live in the physical borough of S.N.P.J.; however, with its 115 mobile home slots, S.N.P.J. is able to maintain a viable number of registered voters in order to satisfy the state's requirements to qualify as a borough. Although provisions prevent non-members from traveling to S.N.P.J. simply for the purpose of consuming alcohol, the borough has still become well-known for its exceptions to North Beaver Township's strict liquor control laws. 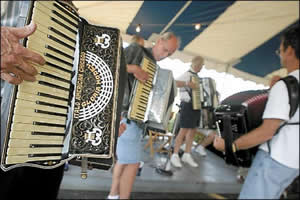 Liquor license secured, S.N.P.J. hosts several festivals and celebrations in honor of Slovenian culture throughout the year. Whether its weekly polka dances or the annual Slovenefest each summer, Slovenians and local residents alike flock to the borough as a source of musical entertainment, food, and culture. Every year during the second weekend of July, over 10,000 people converge upon S.N.P.J. for Slovenefest: three days of continuous celebration of Slovenian culture starting at noon and running late into the night. One of the hallmarks of Slovenefest is the emphasis on traditional Slovenian polka and waltz music, with four official venues on the property playing host to various regional and national artists throughout the weekend and a "Food and Jam Tent" for amateur musicians to join together in scheduled jam sessions.

The other highlight of Slovenefest each year is the Miss S.N.P.J. pageant, which began as a society tradition even before the festival's creation in 1981. In the pageant, female S.N.P.J. members between the ages of 17 and 25 are judged "on appearance in an evening gown, personality and communication skills, talent and community service," as well as "activity within SNPJ" with cash prizes for winners in various categories. 2006 marked a particularly memorable Slovenefest, as not only was it the 25th anniversary of the festival, but it was also the 15th anniversary of Slovenia as an independent nation. The occasion was marked by a visit from none other than the prime minister of Slovenia himself, Janez Janša, forever renewing the bonds between the western Pennsylvania borough and the Slovenian motherland.

Perry-Castañeda Library
University of Texas at Austin
Slovenia lies at the north end of the Adriatic Sea in southern Europe.

Slovenia is an eastern-central European country that borders Italy, Croatia, Austria, and Hungary with a population of just over 2,000,000. After hundreds of years of occupation and shifts in power, including being a part of such kingdoms as Italy and Germany to the Holy Roman Empire and most recently the Socialist Federal Republic of Yugoslavia, the Republic of Slovenia achieved independence in 1991. Slovenia is a member of NATO and the European Union and has produced numerous noteworthy writers, musicians, artists, composers, and scholars, including several Nobel Prize laureates. Slovenia is not to be confused with the larger country of Slovakia, located northeast of Slovenia between Poland and Hungary.