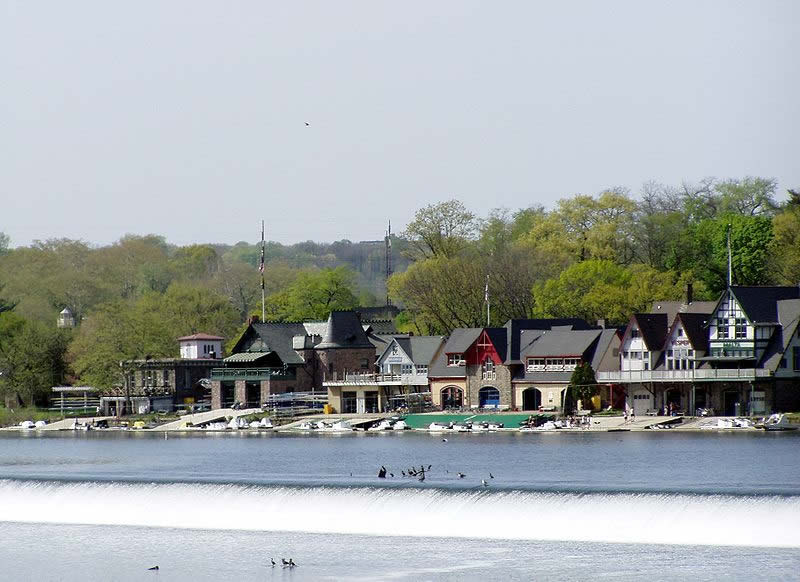 While driving down the Schuylkill Expressway into the city of Philadelphia, the sight of ten uniquely styled houses lined up along the east bank of the Schuylkill River catches the eyes of all who pass. These houses comprise the renowned Boathouse Row, a location founded to produce a community for rowers. Dubbed a National Historic Landmark in 1987, Boathouse Row serves as a place for residents and visitors to congregate to learn about its history, to view its beauty, and to take part in its constant activity.

Boathouse Row would not have existed without the help of its parent organization, The Schuylkill Navy. During the early 1800s, the sport of rowing increased its popularity in America, especially along the smooth waters of the Schuylkill River. Because of this rise in popularity, more professionals began to dominate the sport, leading to more gambling and rule breaking during competitions. Philadelphia’s Schuylkill Navy, now the oldest amateur governing body of sports in America, was founded in 1858 in order to “secure united actions among the several clubs and to promote amateurism on the Schuylkill River.” 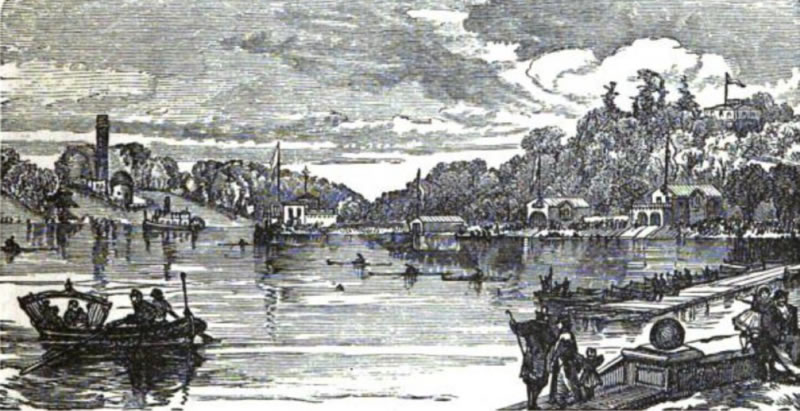 Charles S. Keyser / Fairmount Park and the
International Exhibition at Philadelphia. 1876.
An artistic rendering of rowers at the time of the Centennial Exhibition in 1876.

The Schuylkill Navy would eventually help clubs establish row homes along the river. However, the houses that famously comprise Boathouse Row were not erected until after the city of Philadelphia purchased the lands that composed Fairmount Park in 1855. The few boathouses that stood beside the river before the lands were bought by the city were quickly condemned because of their ramshackle appearance. However, with pressure from the Schuylkill Navy and other organizations, Philadelphia allowed houses to be built. Even with permission granted, clubs attempting to construct buildings along the river found that they were under strict guidelines. The city wanted only stone houses in the Victorian Gothic style to be built. By 1872, a number of houses for various clubs had been erected along the river. Soon after that, the city became more lenient about the appearance of the boathouses and more varieties of houses were built, making up what is now known as Boathouse Row.

The ten boathouses along Boathouse Row are uniquely constructed by various architects, providing a distinct landscape that provides the iconic backdrop behind the rowers. Visitors will see houses with a Mediterranean or Colonial Revival style, or some composed of shingle or stucco. The stunning site, however, loses none of its appeal after the sun goes down. New York Times writer, Dave Caldwell, describes the constant beauty of Boathouse Row when he states, “By day, the houses, prim and charming, stand alone, reflecting brightly in the shimmering water even when the sky is cloudy. At night they are outlined in lights, and Boathouse Row twinkles, a gingerbread fairyland.” 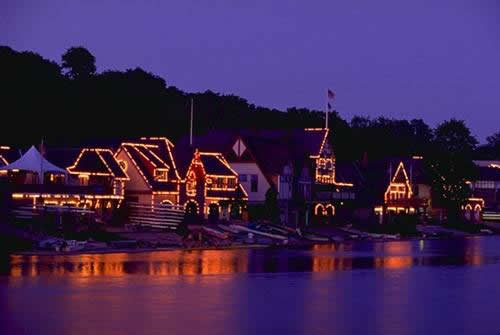 Those lights that outline the houses are as famous and hold as much history as the houses themselves. In 1979, architectural lighting designer Ray Grenald proposed that he line the houses along Boathouse Row with white lights in order to draw more attention to the historic site. In January of 2005, the houses were again renewed, rather controversially, when the original lights were replaced with a new energy-efficient LED system. Members of the community worried about losing the traditional charm that the original lights produced. Inga Saffron, of The Philadelphia Inquirer, describes this worry of Philadelphians in her article, “Lights Out”:

All we can do now is hope for the best, but I can’t help fretting about Philadelphia’s premier postcard view. In our hectic, unpredictable city, where too much changes too fast with too little thought, the little yellowish-white lights of Boathouse Row have been a shining constant, an earthbound North Star that reminds us of where we are.

Whether welcomed or not, the new LED based lighting system was unveiled Thursday, June 30, 2005. This system will save the Fairmount Park Commission $57,000 annually. In addition, it will be able to switch between new colored lights and simple white lights that resemble the original ones designed by Grenald. There are now red, white, and blue lights for the Fourth of July, green for the Philadelphia Eagles, and pink in October for Breast Cancer Awareness. Although these colored lights are used for special events, the Fairmount Park Commission has promised to use the white lights for the rest of the days. This way, the houses, with their white lights illuminating and twinkling against the Schuylkill River, will continue to be an unchanged picture of beauty. 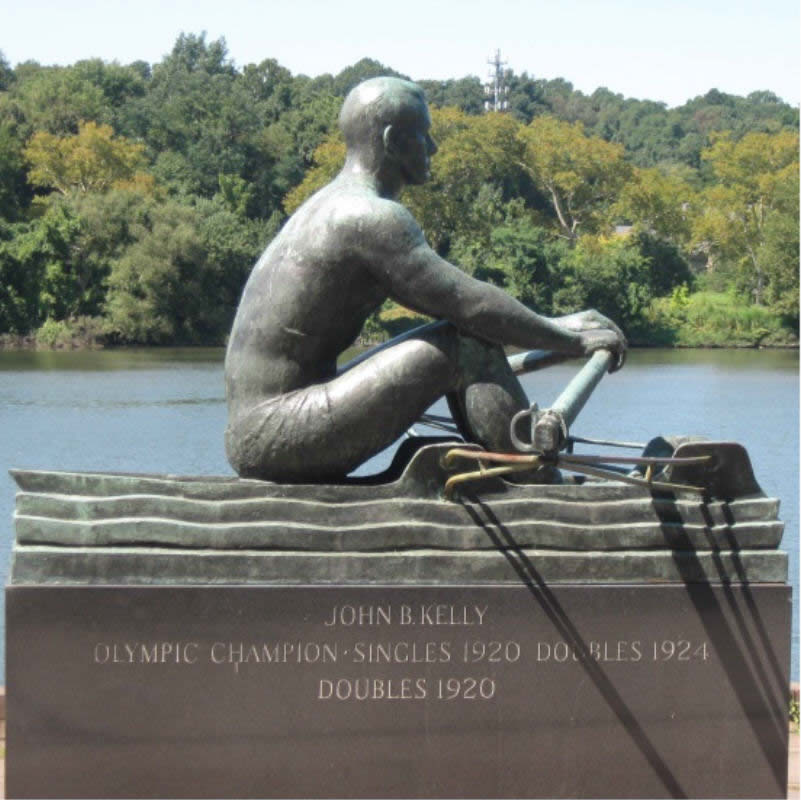 Even though Boathouse Row offers a beautiful setting in which visitors can immerse themselves in, it also serves as a site of rowing competition. These demanding encounters have resulted in the development and success of countless athletes, including one of rowing’s most famous figures. Born to Irish immigrants in Philadelphia, John Kelly Sr. learned to row on the Schuylkill River and eventually became a member of the Vesper Boat Club located along Boathouse Row. His prowess in the sport resulted in two gold medals during the 1920 Olympics and one during the 1924 Olympics. He is still the only athlete to win gold in both single and double sculling. Because of his accomplishments, a statue was built of him in 1965 by sculptor Harry Rosin. Placed near the grandstands of Boathouse Row, the statue not only serves as a remembrance of the legendary athlete, but also as an inspiration for other rowers to push harder and never give up.

Boathouse Row has been called “the ‘Mecca’ of the world of competitive rowing,” surpassing even Boston for the most regattas held each year. The organization conducts many events annually, including the Schuylkill Navy Regatta, Independence Day Regatta, Philadelphia Youth Regatta, and Stotesbury Cup Regatta. The Stotesbury Cup Regatta is the largest high school sporting event in the nation, with hundreds of high school rowing teams travelling to Boathouse Row each year to compete. The Schuylkill Navy also convinced the Dad Vail Rowing Association in 1953 to move its annual Regatta to Boathouse Row. The Dad Vail Regatta, which takes place on Boathouse Row every May, is the largest collegiate regatta, with as many as 100 teams competing each year. 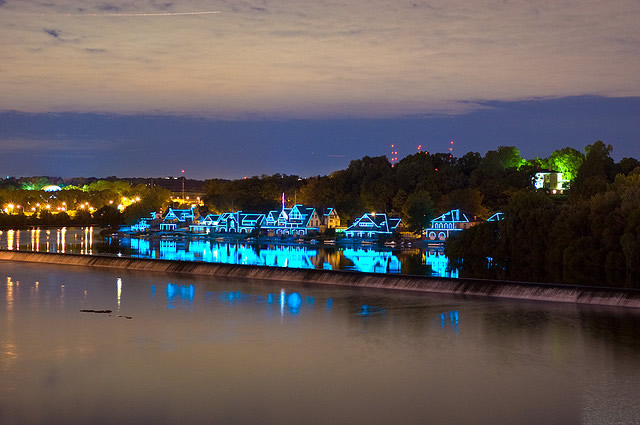 I Like the Weekend / Flickr
New lights give Boathouse Row a new appearance. Blue lights create a non traditional image of the Row, while green lights up Lemon Hill.

Even though it draws many professionals to the banks of the Schuylkill River, Boathouse Row also attracts beginning rowers by offering the chance to learn by example. Those interested in rowing can sign up for learn-to-row programs which are offered by several of the boathouses. In addition, teenagers can attend the summer rowing camp in which they learn the various details of the sport. An even quicker introduction to rowing is also offered. This new program, Rowing Adventures on Boathouse Row, offers a one or two-hour rowing lesson and ride on the Schuylkill River.

Although rowing is one of the most prominent activities occurring at Boathouse Row during spring weekends, it is certainly not the only activity. With its home in Fairmount Park, the largest municipal park in the country, Boathouse Row is the site of many other activities. While running in the Philadelphia Marathon, participants travel along Kelly Drive, catching a glimpse of the iconic houses. The Philadelphia International Championship, America’s top international cycling classic, takes riders through many parts of Fairmount Park, including Boathouse Row. Visitors to the area can also rent bicycles, buy snacks, or simply relax beside the river.

Whether it’s for one rower or hundreds of rowers, whether it’s for the first try of a beginner or the seasoned stroke of a veteran, Boathouse Row will be there to provide a picturesque place for anyone interested in the sport. However, it is not just the activity on the Schuylkill River that makes Boathouse Row a noteworthy location. Dan Lyons, 1986 World Championship gold medalist in crew, admitted that although Oxford and Cambridge in England may have as many boathouses, “none of them have the stature, the age, or the beauty of what we have down on Boathouse Row.” With its long history, refreshing beauty, and continual liveliness, Boathouse Row is truly a site unlike any other.