Roadside America: A Peek Into the Past 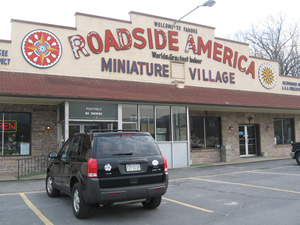 Laurence Gieringer was just a young boy when he sat on top of Mount Penn with his brother Paul, looking down in amazement at the miniature houses and roads that illuminated the night sky. He said to his brother, “Say Paul, wouldn’t it be swell to make little houses the way they appear from here? Future generations could see how things are now!” At that moment, Gieringer knew that he had found a new hobby in toy buildings; what he didn’t know was that over the years, his newfound passion would explode to create Roadside America.

Travelers driving through Shartlesville, located in Berks County along Rt. 22, have undoubtedly noticed the giant waving Amish couple next to Roadside America. The large letters on the front of the building proclaim its unique draw: “World’s Greatest Indoor Miniature Train Village.” Once inside, visitors are greeted by a sign in the gift shop, reading, “Be prepared to see more than you expect—you’ll be amazed.” For a modest fee, curious tourists step behind a faded curtain to reveal 6,000 square feet of tiny whirring trains, flowing waterfalls, and buzzing cars—all set to an old-time soundtrack blaring from the twelve record players situated around the room.

Roadside America is a self-guided tour where visitors walk around the exhibit’s perimeter, separated from the display only by a metal railing. Each scene of the miniature world is numbered, corresponding to an informational brochure that explains the history and creation of each segment. The journey begins with a scene set in pioneer times almost 200 years ago; throughout the tour, the visitor encounters thousands of meticulously handmade houses, farms, churches, stores, roads, trains, factories, and movie theatres, illustrating the timeline of American life all the way up until “modern” times. 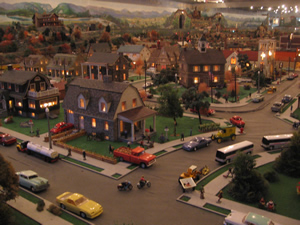 Every 30 minutes, visitors are treated to the Nighttime Pageant, where the lights are dimmed and the display falls into a nightly slumber, complete with twinkling stars, illuminated windows, and patriotic music as the Statue of Liberty and Jesus are spotlighted on the wall.

The vast landscape of Roadside America today is the product of over 60 years of Gieringer’s mastermind and craftsmanship. Born in 1895 in Reading, PA, Laurence would observe the faraway buildings from his bedroom window. He and his brother, Paul, developed a fascination with creating miniature houses when Laurence was just ten years old. Thrilled that this activity would keep the boys out of trouble, their parents set up a workbench in the basement where Laurence and Paul spent many hours after school working on their little models. As their passions grew, they started doing odd jobs around town to finance their tools and raw materials. Building out of just wood, mica, and metal, the Gieringers began to see a miniature city take form.

After seven years of miniature construction, Paul joined the priesthood and Laurence carried on the project alone until Dora Seisler, the girl next door, took an interest in Laurence’s hobby. The friendship evolved into courtship and then into marriage, where Dora faithfully stood by her husband’s creative endeavors. She also played a part in creating Roadside America—she is accredited for making over 10,000 little trees and shrubberies. Their children were even put to work painting the models. 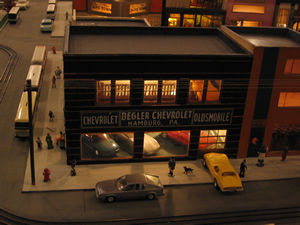 The Gieringers’ creations stirred quite a buzz in their community. Laurence had annually set up the village for his children’s enjoyment at Christmastime, but soon the locals caught wind of the display and in 1935, The Reading Eagle published a feature highlighting it. The local Rainbow Fire Company allowed Gieringer to use the fire hall to house the growing display, and it became a public attraction. In 1938, an additional 1500 square foot display opened as the “International Miniature Village” at Carsonia Park in Berks County. The two exhibits were eventually combined into one and opened at a new location in Hamburg, PA in 1941. However, it continued to grow and gain popularity, and it soon relocated once again to an even larger building to Shartlesville, PA, where it remains to this day.

Laurence Gieringer diligently worked at expanding Roadside America up until he passed away in 1961 at the age of 66. Although his daughter Alberta operates and maintains the facility today, the display has gone unchanged since her father’s death.

The vintage charm of Roadside America is what draws thousands of visitors each year to step behind the curtain and be amazed, just as the motto promises. The attraction serves as a reminder of a simpler time in American society. Gieringer was passionate about his work, and he hoped to inspire children to be creative. A Hollywood Television Productions feature on Roadside America circa 1950 sums up his legacy in a few simple sentences:

Even though Mr. Gieringer, through Roadside America, presents an accurate picture of the past, he is by no means lost in the past itself. He’s especially interested in today’s youth. It is his hope that his work has inspired many children to develop creative hobbies. Mr. Gieringer believes that most of the world’s great inventions were the outgrowth of the hobby of some child.