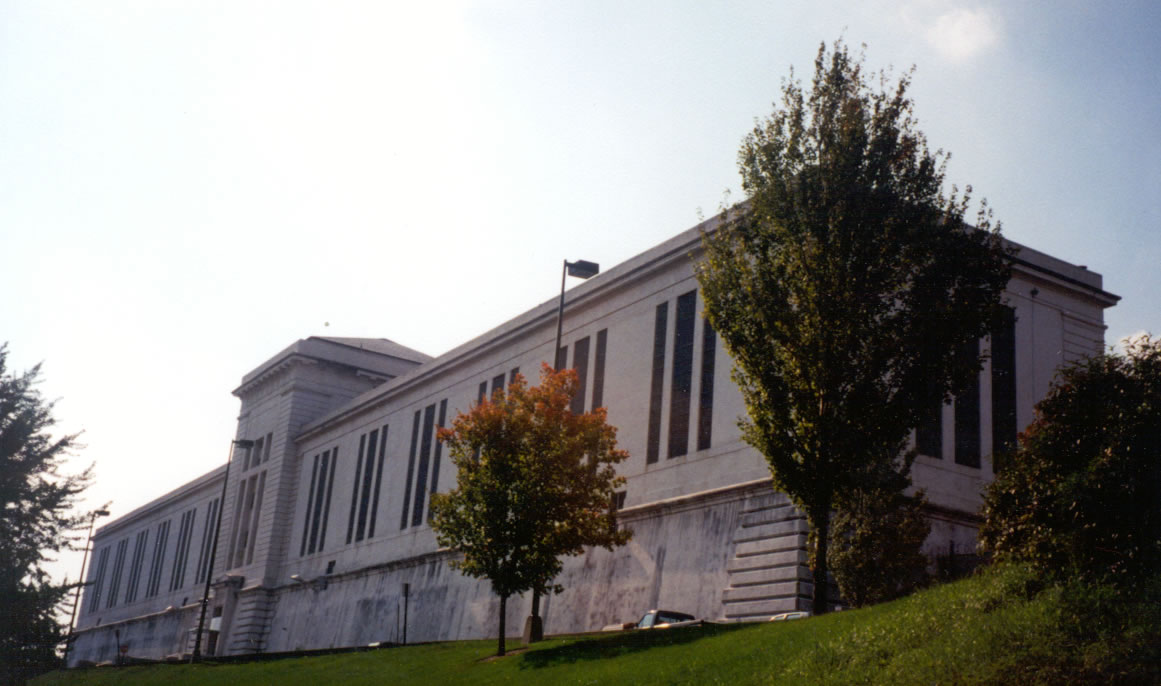 First Electrocution in State Success,” read a local newspaper headline after the first execution using the electric chair was performed in Pennsylvania, at the Rockview State Correctional Institute.

In 1889, the Electrical Execution Law went into effect, which replaced death by hanging, the previous standard method of execution since colonial times, with the electric chair—a method thought more efficient and humane.

Centre County’s Rockview State Correctional Institute, built in 1912 and opened in 1915, was the first place in Pennsylvania to use the electric chair. Rockview marked a central location in the center of the state for convicts awaiting death row in the prisons of Pittsburgh, Philadelphia and Huntingdon. In legislation enacted in 1913, and for the following eighty years, this ‘death house’ was the only location in central Pennsylvania where execution was performed. 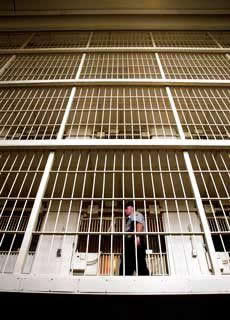 Daily Collegian
A guard patrols one of the tiers inside Rockview.

Rockview State Correctional Institute was originally an agrarian institution, providing prisoners with skills to work once they were released from the penal system. At its inception, the prison covered over 5000 acres. Inmates cultivated the land and sustained their food supply strictly from Rockview-owned land—an unusual, but successful system. Any surplus produce was sold at market prices and the profits benefited the state. Harry Barnes, an American historian of Pennsylvanian penology, described Rockview as “a great central prison [that] would supersede both the Eastern and Western Penitentiaries… and promises to be the most ambitious experiment yet carried out in the field of agrarian penitentiary projects.” According to the Pennsylvania State Archives, “[The Pennsylvanian] Western Penitentiary,…opened in 1826, was built entirely of banks of individual cells, so small that the entire building had to be demolished in the 1830s and rebuilt with larger individual cells. The Eastern Penitentiary at Cherry Hill, Philadelphia, was opened in 1829, with a more practical design but still emphasizing solitary cells. Although a statute of 1829 that allowed prisoners to be kept ‘singly and separately at labor’ survived until 1978, the Pennsylvania System had long since disappeared under the discretion of the state’s prison administrators.” Drastically different from these solitary-based penal systems, Rockview was to change the history of American penitentiaries.

The rural landscape of the surrounding mountains proved effective in preventing escapes of inmates housed in the cell block or working the land. The mountains beckoned inmates to flee, but the wilderness was so unforgiving that they were either found in a matter of days or they would return on their own accord. Prisoners simply could not fend for themselves in the backwoods of central Pennsylvania. Rockview undertook many new endeavors, but the most unprecedented was that prisoners were to govern themselves as they worked outside, using their rational judgment to stay on the grounds. Throughout the prison’s history, there was a small but steady string of prisoners escaping the grounds, but most were found shortly after fleeing.

Rockview State Correctional Institute was not just a model institution for its agrarian projects; at the time of its debut, the ‘death house,’ equipped with electric chair, was the premiere design for an execution facility and was used as a model by surrounding states. The pace of death sentences picked up pace in the earlier decades of the 1900s since it was seen as such an efficient manner to carry out justice.

The chair’s first occupant, John Talap, was pronounced dead minutes after being administered some 2000 volts on February 23, 1915. In 1913, Talap was convicted of murdering his wife, Mary. The Philadelphia Inquirer reported, “As he backed into the chair, Talap appeared to be badly frightened. He half turned to look at the instrument of death, but was quickly settled into the chair and strapped in.” Rockview’s electric chair was used a total of 350 times between 1915 and 1962, executing 348 men and two women. 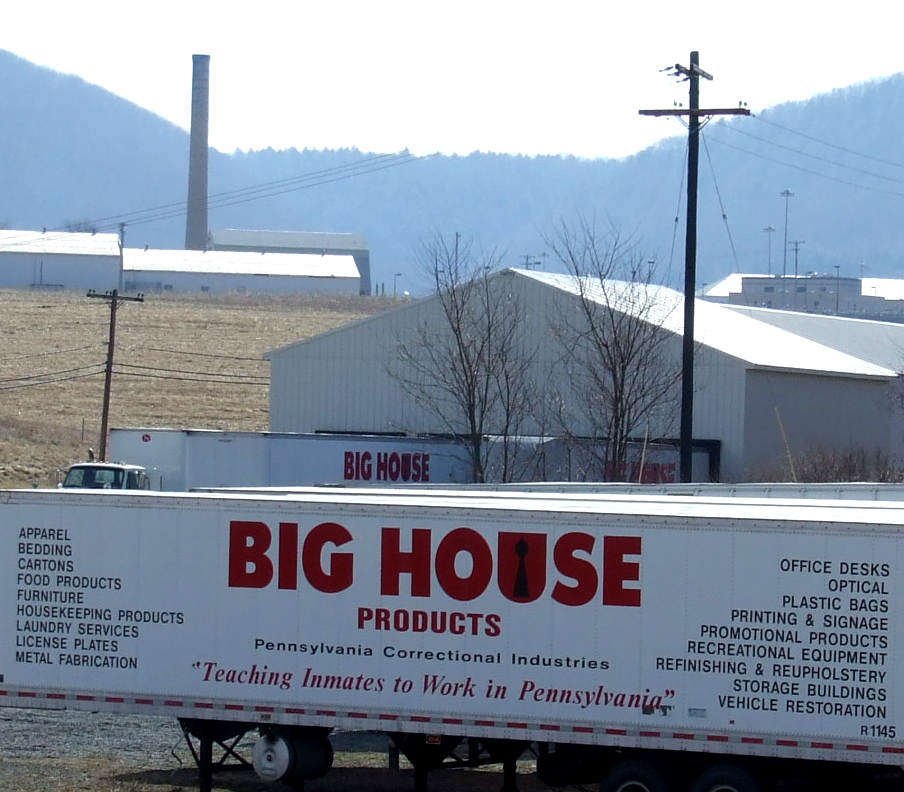 Dave Bonta
SCI Rockview's inmates work as part of their rehabilitation; their products are sold throughout the rest of the state.

Sixteen years to the day after Talap was the first to be executed by the chair, Irene Schroeder became the first woman to be executed the same way in Pennsylvania, also at Rockview. The New York Times covered the incident, reporting that the execution was “carried out with precision. There was awakening in the darkness, final preparations for death, breakfast, gospel hymns, and then the march to the chair.” Schroeder was convicted of murdering State Highway Patrolman Corporal Brady Paul in a gun battle. She chose to be executed in the electric chair rather than to serve a life sentence. The last person executed by electrocution in Rockview was Elmo Smith of Montgomery County, convicted for the rape and slaying of a Philadelphia school girl. The execution was carried out on April 2, 1962.

As prison systems evolved and security became more stringent, the number of escapes at Rockview Penitentary subsided drastically. Cracking the confines of the penitentiary from the inside was near impossible, and those who did manage to get away were often working on the grounds outside. In a 2003 interview, Rockview’s assistant warden Jeff Rackovan said, “The last inmate to escape from the Rockview prison did so in the early 1980s while working outside the compound on a weekend. A man sentenced to life imprisonment for murder was able to escape when his girlfriend picked him up in a car from the area he was working in. The details of his break were aired on America’s Most Wanted, and he was again arrested.”

Prison population began to swell in the 1980s and 1990s with an exponentially increasing number of convicts; Rockview had to take on some higher risk prisoners. Prison officials could no longer rely on the original civil and humanitarian nature for men to govern themselves from escaping, and as a result, security has been enhanced. Although it remains a medium-security facility for burglars, drug dealers and criminals with similar convictions, the institution does house life-sentenced inmates. However, those with life-sentences will always be confined to the inside of the prison. 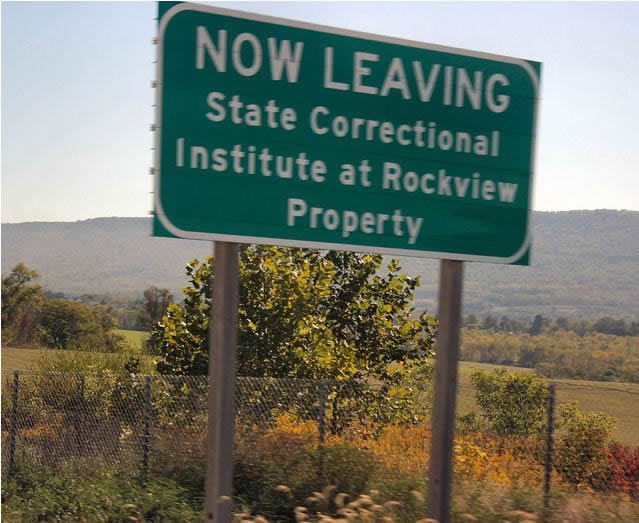 Anne Greene
Drivers along Interstate 99 are greeted by warning signs as they pass through Rockview's property.

The death penalty has become an intensely controversial issue within the legislative bodies of the government as well as with the general public. Rockview’s role in being the sole site for executions in the state of Pennsylvania made it a target for those opposed to capital punishment in the justice system. In 1985, a peaceful demonstration by the Centre County Citizens for Abolition of the Death Penalty gathered on Rockview grounds, singing hymns, lighting candles, and reciting the names of the men and women who were executed there since 1915. Three men were scheduled to be executed at Rockview in December of that year, but the Supreme Court granted them stays of execution. “The stays are only temporary,” remarked Marie Hamilton, one of the protestors, “we will continue to work until the death penalty is abolished.” The sheer number of executions in the state and nationwide has decreased dramatically as the constitutionality was being debated. Inmates remain on death row much longer in recent history since many court decisions are appealed.

In 1990, Governor of Pennsylvania Robert Casey signed legislation making lethal injection the method of capital punishment. Undoubtedly the most famous feature of the prison, the electric chair, was moved from storage to the Pennsylvania Historical Museum Commission in Harrisburg. Rockview’s “death house,” however, is still a place of execution for convicts by lethal injection. Gary Heidnik, convicted for kidnapping and murdering two women, was the last person executed in Pennsylvania, on July 6, 1999.

The death house remains a focal point in Pennsylvania’s justice system as the debate on the constitutionality of the death penalty continues. The legal maneuvers available, along with prevailing human rights activism, are very likely to continue delaying the use of the death penalty in the Keystone State.

The Center wishes to thank Anne Greene and Dave Bonta for their assistance illustrating this article.