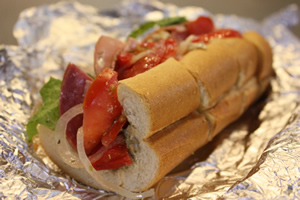 Kathy L. Chan, Flickr
Brimming with meat, vegetables, and oil and vinegar, the hoagie has fed millions of Pennsylvanians over the decades.

While chomping down a traditional Philadelphia hoagie filled with meat, cheese, lettuce, onion, tomato, and topped off with a dash of oregano-vinegar dressing all fitting magically on an Italian roll, it is a wonder where this delicious monster of a sandwich gets its name. Over the course of history the hoagie has been known by many different names and has been found in countless variations, but today the term hoagie is fairly universal throughout Pennsylvania.

Although there have been many theories about the emergence of this Philadelphia native sandwich, the most popular tale depicts the hoagie originating in the City of Brotherly Love. The site of the Philadelphia Navy Yard was once known as Hog Island (the creek that created the island has since been filled in and the area is now the Philadelphia International Airport). Many Italian immigrant workers brought sandwiches overflowing with cold cuts, spices, oil, lettuce, tomatoes, onions, and peppers stuffed into a freshly baked roll to eat for lunch during their shifts making ships for the American Navy. The workers were nicknamed hoggies and the name eventually morphed into hoagie over time. Another variation of this story avers there was a worker at the shipyard named Hogan who asked one of his fellow workers if he could buy one of the delicious sandwiches that the worker's wife made. The man's name Hogan got attached to the name of the sandwich and eventually evolved into hoagie over the years. 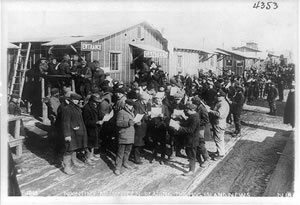 Monaco Family Online
Workers as the Hog Island Shipyard legendarily gave their name to the Official Sandwich of Philadelphia.

A second and more plausible theory about the origin of the hoagie tells the story of a rising restaurant entrepreneur named Al De Palma. In 1928, De Palma was a struggling jazz musician who saw some of his fellow musicians devouring the monstrous sandwiches for lunch one day and exclaimed, "You have to be a hog to eat one of those." Later when the Great Depression hit, he could not find work as a musician and decided in 1936 to open up his own sandwich shop in Philadelphia. After remembering that fateful day that he witnessed his friends eating the huge sandwiches, De Palma decided to sell them as "hoggies" in his store and self-proclaimed himself to be "King of the Hoagies."

However, it is important to note that the spelling of hoggie and its several variations including hoogie, hogie, and hoggy were all used for hoagie well into the early 1950s according to linguists Edward Eames and Howard Robboy. Robboy is considered to be an expert on hoagies because he wrote two scholarly papers on the hoagie, of which included "The Socio-Cultural Context of an Italian-American Dietary Item" and "The Submarine Sandwich in America: Lexical Variations in a Cultural Context." Eames and Robboy found that both the terms hoagie and hoggy were used in a 1945 Philadelphia telephone book. Furthermore, they found the use of hoggie in a 1944 phone directory, hogie in 1943, and hoogie in 1941.

In addition, Robboy is also known as a hoagie expert because he has been the only person known to ever testify in court as an expert of hoagies. The case occurred around 1973 when a sandwich man from Tucson sued a 7-Eleven store for introducing a pre-wrapped version of the "hoagie" sandwiches that he makes at his store. Robboy testified that the origin of the word "hoagie" likely originated in the 1930s and that it could not be copyrighted. Consequently, the Tucson sandwich man lost the case.

The confusion of the hoagie name may be partly due to the sandwich being called by many other names in accordance to the particular United States region. Some refer to a hoagie as a submarine or sub, grinder, poor boy, or hero. It is believed that the submarine sandwich, also commonly known as the sub, originated in the New England area in Connecticut because of the naval submarine base there, but there is no substantive evidence to support this claim. Therefore, the sub does not have a connection to any specific region in the United States. The grinder, on the other hand, is commonly linked to the New England area, excluding Boston where it is less common. One region of Pennsylvania even calls the sandwich a zeppelin.

In contrast, the poor boy is from the southern region of the United States and got its start in New Orleans probably in the early 1930s. The poor boy received its name from the fact that the sandwiches were inexpensive but satisfying meals for "poor boys." Furthermore, the hero got its claim to fame in New York after the New York Herald Tribune food columnist Clementine Paddleford created the name in the 1930s because the sandwich so huge "you had to be a hero to eat it." Unfortunately there is no record of this tale in Paddleford's columns and thus, the coining of the name hero for a New York sandwich remains a mystery. In any case, the term hoagie is widely used throughout Pennsylvania and southern New Jersey. 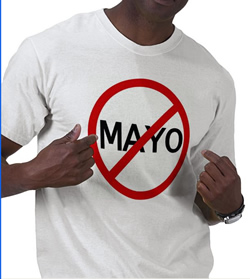 Zazzle.com
When in Philadelphia, never ask for mayo on a hoagie.

No matter what the sandwich is called though, they tend to follow the same basic pattern of meat, cheese, lettuce, onion, tomato, and seasonings on a roll no matter where the sandwich is purchased. However, a "hoagie" is the only proper and acceptable name for Philly's biggest culinary contribution. In 1992, this delectable and mouth-watering dish was declared the "Official Sandwich of Philadelphia."

It is very important to realize that there are certain standards when ordering a traditional Philadelphia hoagie. These hoagies are made on Italian rolls lightly sprinkled with oil and vinegar but never mayonnaise. They are layered with shredded lettuce, onions, tomato, and different meats according to the customer's preference. The sandwich is complete after the addition of the seasonings oregano, basil, salt and pepper. Typically Philadelphia hoagies contain provolone cheese. Pickles are never to be put on a Philadelphia hoagie and as sports-radio talk show host Glen Macnow says, "Mayo on an Italian hoagie is a sin." Macnow of WIP-AM 610 hosted a "Hoagie Hunt Finals" in Summer 2009 to find the best hoagie of the Philadelphia area. He crowned Paesano's of 152 W. Girard Avenue, Northern Liberties as the best place to buy hoagies. According to Macnow, the place with the best hoagies is where "a hoagie is a meal. It's a treat. Other places, a hoagie is just a sandwich."

While the cheese steak is a Philly favorite, the hoagie is a close contender that may be equal or even greater in popularity in the Philadelphia region. Regardless of the different variations, one thing remains true to loyal hoagie fans: changing the basic ingredients can be detrimental to the quality of the sandwich. Just as there is a "taboo" on changing the contents of cheese steaks in Philadelphia, exchanging oil and vinegar for mayonnaise on a hoagie is the equivalent of replacing a cherry on ice cream with a tomato and still calling it a sundae. Tradition is important to native residents of South Philadelphia, and altering their beloved sandwich is bewildering and almost incomprehensible to them. 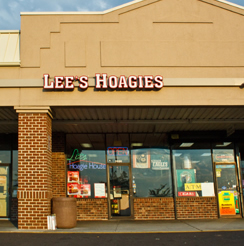 One of the most famous and favorite spots to grab a hoagie today is Lee's Hoagie House. After being voted "Best of Philly" by Philadelphia Magazine, Lee's has expanded to 17 different locations throughout Philadelphia, Bucks, and Montgomery counties. The original Lee's Hoagie House is located on the corner of 19th Street and Cheltenham Avenue in the Mt. Airy neighborhood. This modest establishment serves up custom-made, super fresh hoagies smothered in a secret oil. Lee's Hoagies is a convenient stop for families wanting to take a picnic or tailgate before a game or event. They also provide jobs for local teens in the community and often cater large parties and Philly events.

Not only are there several different names for this sandwich and a traditional way to order one in Philadelphia, but there are also many varieties of hoagie types. One of the most popular hoagies is the Italian or "regular." This hoagie is filled with Italian ham and salami along with regular toppings. Some other hoagie variants include ham, tuna, roast beef, turkey, and just cheese plus all of the other traditional hoagie ingredients. There is also a vegetarian hoagie that includes tomato, onions, lettuce, peppers, cheese, and sometimes eggplant. 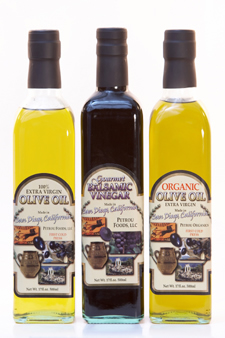 Petrou Foods
According to native Philadelphians, olive oil and vinegar are the only acceptable hoagie condiments.

Furthermore, a hoagie can also be ordered to fit personal preferences such as ordering it "dry," which means "hold the oil." Although all these ingredients come together to create the masterpiece known as the hoagie, the heart of the sandwich lies in the Italian roll. The crust has been described by the author of "The Foods of Philadelphia," Mark Glicksman, as a "medium texture, midway between the hard crust of a baguette and the wimpy crust of a packaged supermarket roll. The interior is soft, with a wonderful yeasty taste."

The hoagie has evolved throughout history to become a favorite dish not only in Pennsylvania but throughout the United States under the cloak of varying names. Although the origin of this delectable sandwich is still inconclusive, the hoagie has certainly earned its recognition based on taste and tradition. It really does not matter if you call it a hoggie or a hoagie, the sustenance and essence of the sandwich will forever remain the same.