The Shriver House: Observer at Gettysburg 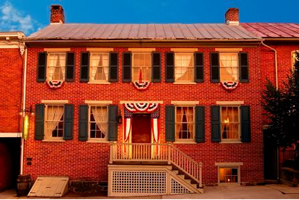 Del Gudmestad
The Shriver House Museum as it appears in Gettysburg today.

In Gettysburg, Adams County there is the famous battlefield with intact cannons, large cemeteries with hundreds of aged tombstones, and a main road lined with houses in narrow lots. The houses look as though they’ve been standing since the late 1700s, but most of them are a façade, having actually been built well after the Civil War. The oldest house on the town’s main street, Baltimore Street, was built in 1860, only a year before one of the bloodiest battles on United States soil began. It is known as The Shriver House and is now an award-winning historic museum, owned by Nancie and Del Gudmestad. The couple’s restoration of the Shriver House has been so thorough that even television specials such as “The Shriver’s Story,” “If Walls Could Talk,” and “Most Haunted Live: Gettysburg” have taken note, traveling to Gettysburg to document the museum and interview the owners. The mission of the museum is to provide the “Civilian’s Experience” of what is considered the bloodiest battle fought on U.S. soil; an experience that Nancie Gudmestad believes is “overlooked by historians and interpreters of the encounter.”

George Washington Shriver bought a double-lot of land on the edge of Gettysburg in 1860, and quickly started building a home for his family. It was quite a large house, especially in that day and age. It had a parlor, used only for special occasions, and a sitting room, more like a contemporary family room. This is where daughters Mollie and Sadie completed their homework, but also where the family meals were served. Shriver built his wife, Hettie, a rather large kitchen right behind the sitting room. The house had two bedrooms, one for his daughters and the other for him and his wife. There was also a workroom, which served as a closet. Hettie’s sewing machine and materials were kept in that room, as well as a small desk and several books. Upstairs was a large garret meant for additional storage. 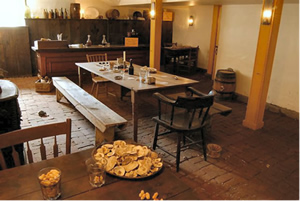 Del Gudmestad
The Shriver Saloon as it was restored.

Because he planned to start a business of his own, Shriver built a tavern in the basement of the house. He included a separate kitchen in the cellar meant to be used to prepare meals for the saloon. After the house was completed, he built a 16-by-64 foot building behind the house. In it, he constructed two ten-pin bowling lanes. Additionally, there was a garden in the backyard, where Hettie and her daughters would grow and harvest crops year round.

Both Shriver and his wife grew up on small farms just outside of Gettysburg. Mr. Shriver bought the double-lot of land on South Baltimore Hill for just $290 in 1860 with the intentions of building a nice, upper-class home for his wife and their two daughters. At the time, Mollie was five years old, and Sadie was three. In April 1861, as they were putting the finishing touches on their new home, the Civil War began.

Initially, many Americans did not believe the war would last, but that following September, President Lincoln called for 75,000 more troops. Mr. Shriver decided to enlist. By the winter of 1862, Mrs. Shriver and the girls had become used to having many Union soldiers spending their nights in the saloon and bowling alley, but Mr. Shriver never did. Then in 1863, two years after the beginning of the war, Confederate troops crossed the Mason Dixon Line into Pennsylvania. On July 1, the Battle of Gettysburg began. Mrs. Shriver decided to take her two children to her parents’ farm just three miles south of town, hoping for safety. Unfortunately, that farm was located right in between Big Round Top and Little Round Top, where some of the most severe fighting took place.

Over the next three days, there was very little communication between family members due to cannons and gunfire. When the fighting ended, there were wounded and dead men and horses all around the farm. Mrs. Shriver stayed a few days to help care for the wounded soldiers and bury the dead. The Battle of Gettysburg left 52,000 men and 5000 horses dead. On July 7, Mrs. Shriver decided to take her daughters home. 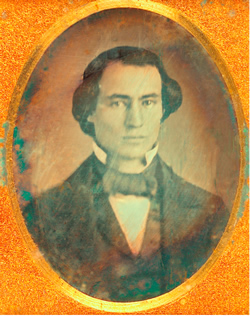 Unfortunately, most of their little town had been destroyed. It was almost unrecognizable. Most of the houses around hers were in ruins, yet the Shriver house stood strong. She learned from neighbors that the Confederate soldiers had occupied her home and had set up a sharp-shooter area in her attic. It was known that at least two soldiers had been killed there. She also found huge holes in the side of her house where they had sniped passing Union soldiers. Mrs. Shriver worked vigorously to make her house a home again, but without George, the task seemed in vain.

Five months later, George Shriver was granted a four day furlough to spend Christmas with his family. The reunion was not a happy one, for the war and the two and a half years apart had changed them all, especially Mr. Shriver. He reported back for duty on December 29, 1863 to Cole’s Cavalry. The cavalry, consisting of only 250 men, was attacked by more than 400 Confederate soldiers. In the end, Cole’s Cavalry suffered three casualties and six wounded men. George Shriver and six fellow soldiers were taken prisoner on January 1, 1864.

George Shriver was held prisoner at the notoriously cruel and deadly Andersonville Prison in Georgia until his death in December 1864. On April 1, 1866, financial concerns forced Hettie Shriver to sell her house for $2,100 to Daniel Trimmers. She and her two daughters moved to High Street in Gettysburg.

The house had mostly been conserved, until the new owners decided to split the house into a duplex with several apartments on each side of the building in 1905. The bowling alley was torn down, and additions were built attached to the back of the original house. The changes in the building have made the structure vulnerable. Over the years, different owners added new stairways, windows, and entryways. One owner even placed heavy heating furnaces on the second floor, a foundation clearly never meant to support that sort of permanent weight. Beginning in 1967, the house was left vacant for nearly 30 years. The Borough of Gettysburg tried several times to condemn the property, but local citizens wouldn’t allow it. 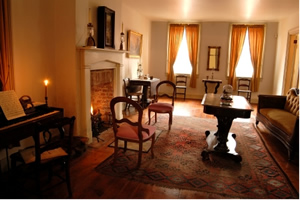 Del Gudmestad
The formal Parlor of the Shriver House.

In 1996, the Shriver House was bought by the Gudmestads. They immediately began restoration on the property with intention to get it back to its original appearance. Almost immediately the Gudmestads started finding special artifacts from the 1860s. In the attic, there were Confederate bullets found, some that had not been used and some that had. Additionally, Union bullets were removed from the bricks in the garret and medical equipment was found under the floorboards. In the house, a little girl’s shoe believed to be one of George Shriver’s daughter’s was found in a wall. Other household items were found, for example, a jello cookbook, glassware, and spectacles. These objects were able to help tell the story of the family that lived here, and the time period. But the biggest discovery, according to the Gudmestads, was not found in the house. It was the diary of the Shriver’s neighbor, Tillie Pierce. This diary gave a detailed description of the Shriver family and what occurred during the days when the Civil War came to Gettysburg.

The Gudmestad’s have taken on Mr. Shriver’s task, spending several years restoring the house and replacing the little bits and pieces that would make this a home of the late 19th century. In each room there are details of the time, such as a wooden butter churn in the kitchen, or classic tea cups and an antique jacks set in the girl’s bedroom. With the tour guides in full time period dress, the entire experience at the museum is dedicated to bringing visitors back to the 1860s. The guides give an intimate portrayal of the Shriver family, making the tour not an average boring museum tour, but a more accurate invitation into a friendly neighbor’s home.