Spinning Out Heroes: The Johnsville Centrifuge 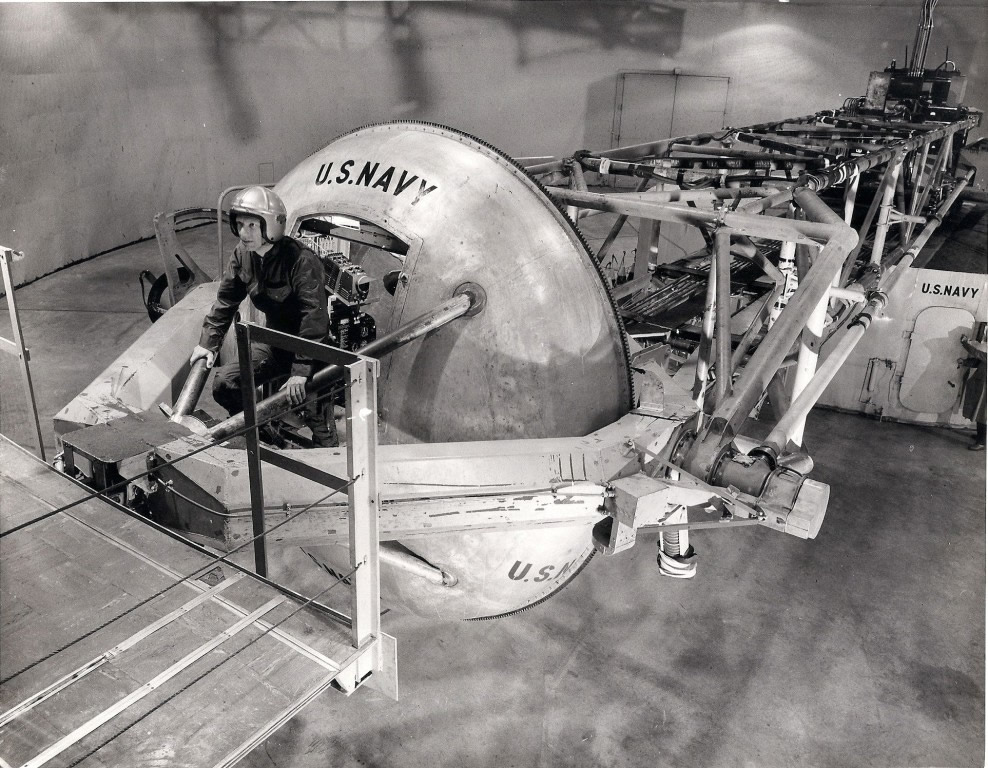 Many people would never think to mention Pennsylvania in the list of places that paved the way for the first space flights, but those in the know might bring up Warminster in Bucks County, the home of the Johnsville Centrifuge. Maybe because of its restricted location on the former Johnsville Naval Air Development Center (NADC) property or because of its distance from anything NASA, no one would think to look in this suburban area. Here in Warminster is what remains of a once-great training facility that was instrumental in training X-15 pilots as well as the Mercury, Gemini, Apollo and the first set of Space Shuttle Astronauts for their missions.

A human centrifuge is a machine made up of a rotating arm, at the end of which is a capsule or “gondola” in which the test subject is positioned. The motion of the arm imposes Gs (multiples of gravitational force) on the human body. This is done in an effort to prepare the user to cope with the G-forces that may be experienced during high speed turns in jet planes or during the lift-off and reentry stages of a typical space mission. The principles that create Gs in a centrifuge are the same as those that keep water in a bucket that you swing quickly over your head or the force you feel pulling you out of your seat as you crest a hill in a car, but on a much larger scale. By rotating a person at some distance from the center of rotation, a centrifugal force is exerted on the subject away from the center of rotation. The faster the rotation and the longer the arm, the higher the G force that is exerted. 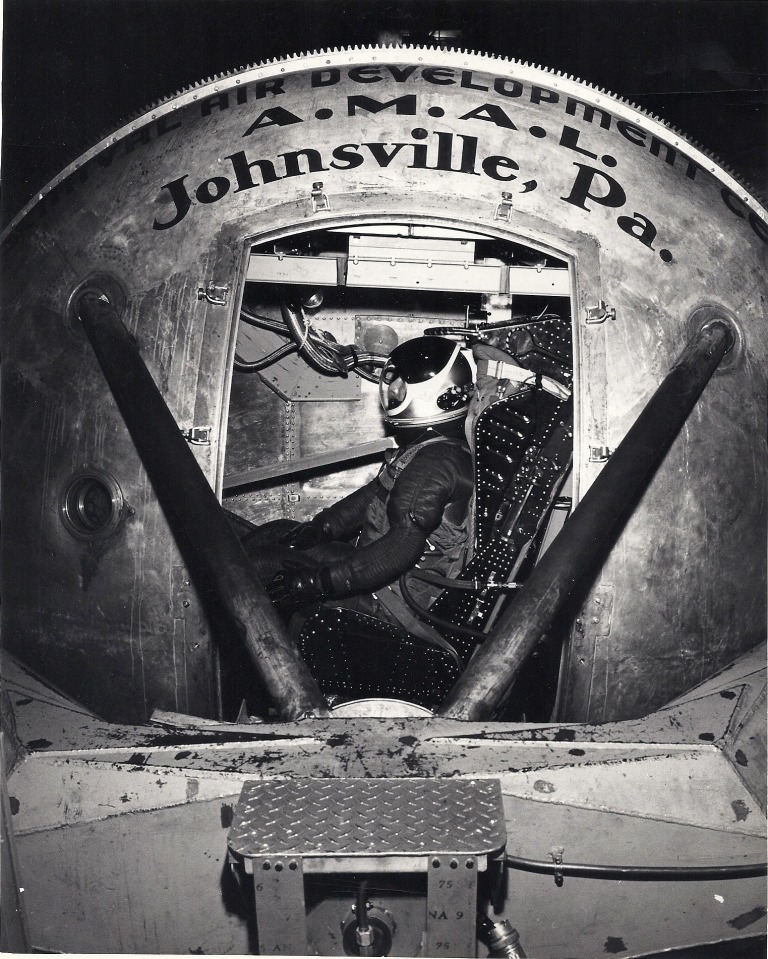 In the case of the Johnsville Centrifuge, the arm is 50 feet long and was powered by a 4,000 horsepower motor (built by GE) that was capable of pushing the gondola to 175 mph in just under seven seconds, generating up to 40 Gs, more than any human could handle. An average man will black out at only six Gs. At 40 Gs, a 175 lb person would feel the weight of 7000 lbs. Built between 1947 and 1950, the 180-ton centrifuge holds the distinction of being the largest and most powerful ever built, even to this day. As a result of the torque generated by the motor, it needed to be anchored directly into the bedrock. That being the case, engineers sought the most stable piece of ground in North America and came to Warminster where the bedrock is 95 % stable.

Initially, the property located near the intersection of Street and Jacksonville Roads was acquired by James Work, an entrepreneurial businessman once employed by the Naval Air Factory at the Philadelphia Naval Ship Yard (PNSY). By 1941, Work had established the Brewster Aircraft Company at the Warminster site and was building their Buffalo and Buccaneer aircraft under contract for the U.S. Navy. The Navy later seized operation of the company after Brewster experienced difficulties with production which resulted in a default of their contract. When problems continued, the Navy acquired the property outright and converted it for use by the Naval Aircraft Modification Unit (NAMU), originally located at the PNSY. Eventually the site became Johnsville NADC. As a footnote, James Work went on to found Delaware Valley College in Doylestown, Bucks County.

Although best known for training NASA Astronauts, the Johnsville Centrifuge had been a premier acceleration laboratory since it began operations in 1950, which is why it was chosen by NASA. Even before the arrival of the Mercury Seven in August of 1959, groundbreaking research was being done here. Not the least of such work was a run by R. Flanagan Gray in 1958 in which he was subject to 31.25 sustained Gs for 5 seconds, submerged in a specially-built water tank known as the “Iron Maiden.” Dr. Gray’s endurance record stands to this day. Another experiment carried out at the Johnsville Centrifuge was by Dr. Carl Clark, in which he endured a two G load for a continuous 24 hours to test the theory that a human could sustain relatively low acceleration forces for an extended time in order to build up enough speed to make it to Mars in days instead of months. The only ill effect of the experiment was fatigue. 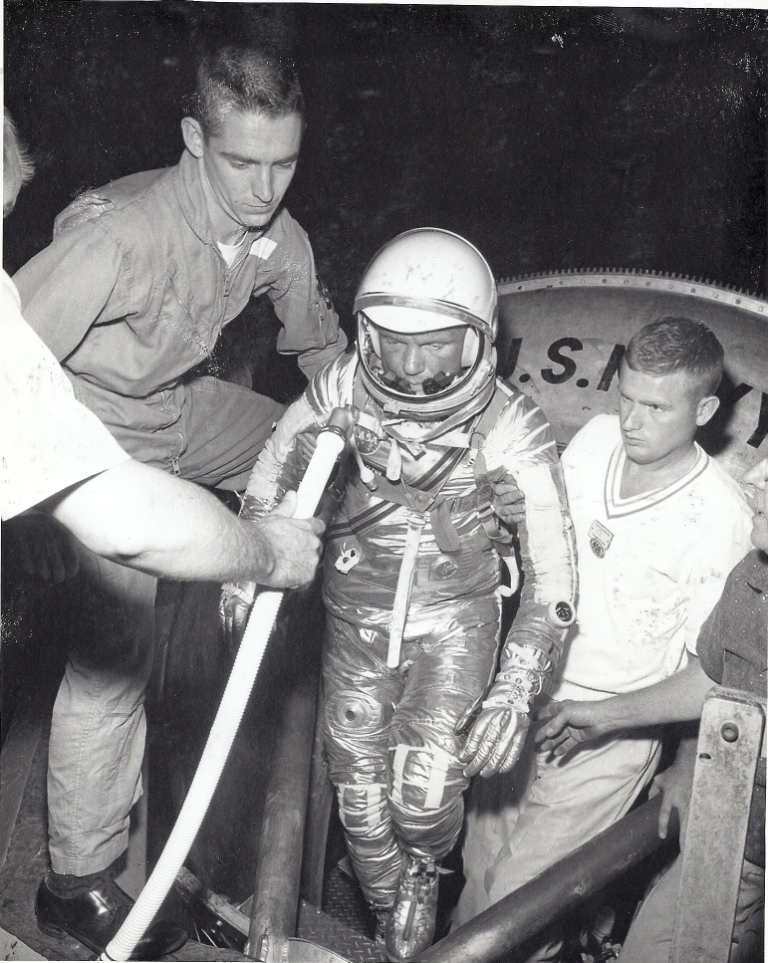 Courtesy Johnsville Centrifuge & Science Museum
John Glenn stepping out from another spin on the "wheel."

To a man, the Astronauts credit their training at Johnsville for preparing them for the rigors of their missions. It is not an overstatement to say that the success of the early American Space program, in part, rested on the work done at the Johnsville Centrifuge. The centrifuge allowed for the testing and preparation of astronauts as well as the testing of any component that might fail under the high G loads. Some of the testing the men of the Mercury missions (1959-1963) would undergo lasted in five-minute increments. During these five minutes, G forces would be gradually increased. Astronauts trained to learn techniques to stop blood from leaving their brains, to prevent the loss of consciousness. Additional testing included “eyeballs-in, eyeballs-out testing” in which the gondola was shifted or “oscillated” 180 degrees, forcing the men into and out of their seats with each oscillation. This helped to test the harness set up as well as the durability of the astronaut should a capsule flip over on splashdown. Other tests in preparation for their orbital missions would last for an entire flight profile over many hours, simulating launch, orbit, re-entry, then splashdown. This same type of simulation also aided the preparation of the Gemini missions (1965-1966) and finally the Apollo missions (1976-1972) which culminated with the first trip to the moon. In fact, not a single man stepped foot on the moon without first making a trip to the Johnsville Centrifuge. To adapt the centrifuge for each specific mission, the gondola was re-fitted with a simulated cockpit with the gauges, dials and controls configured to match that of the capsule to be used for the mission.

The abilities of the machine, known as the “wheel,” took these men to the outermost limits of their abilities to maintain consciousness under the most extreme of G forces. The point of all this testing was to prepare potential astronauts for “worse-than-worst case” scenarios. In some of these tests the men were subjected to 16 Gs which, “took every bit of strength and technique you could muster to retain consciousness” according to John Glenn (quoted in First Man: The Life of Neil A. Armstrong). As Ben Evan describes it, this type of testing was “enough to smooth back the skin on their faces and break blood vessels in their back.” One of the most impressive runs in the wheel was done by Lieutenant M. Scott Carpenter who “devised a breathing technique, akin to explosive grunting, which allowed him to withstand 18 G with few ill-effects.” 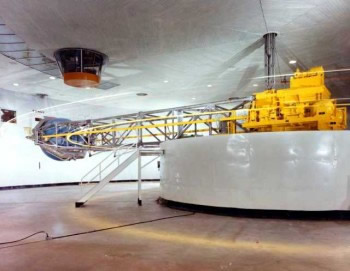 Courtesy Johnsville Centrifuge & Science Museum
The long 45-ton arm of the centrifuge, at the end of which is the gondola.

This type of training did not go without its effects. “At 9g, the pilots could still see a few instruments. At 12g they could still operate the hand controllers but experienced chest pain and difficulty breathing (although the pilots still believed they were in control). Forces 14 times the force of gravity pushed the pilots back into their seats, and narrowed their vision”. As Mark Wolverton explains, some of the effects of this kind of stress can be much more serious. Some of these effects include: “swelling of the feet and ankles, ruptured blood vessels in the groin area, blood clots, temporary change in blood-flow patterns in the lungs, possible collapsing of the lungs, fractured ribs, and arrhythmias.” As a matter of fact, it was during a run in the Johnsville Centrifuge by Donald K “Deke” Slayton that his heart arrhythmia became apparent, eliminating him from the Mercury program.

Tests at the Johnsville Centrifuge also affected the design of the cockpit layout. As a pilot starts to black out from the G load (a condition known as Gravitational Loss of Consciousness, or G-LOC), they enter a stage of tunnel vision, followed by gray out and then total loss of consciousness. As a result of understanding this progression, engineers decided to place the most important gauges in the center of the control panel so they would still be visible under tunnel vision conditions. The development of the “side stick” controller (placement of the controller on the armrest) was the result of centrifuge testing where it was determined that the traditional placement of a control stick between the pilots legs made it difficult to handle it under high G’s.

Postscript: In 1963, the original gondola that was used by the Mercury, Gemini and Apollo astronauts was removed and replaced by a larger gondola. The original gondola found its way to a Smithsonian Institute storage facility where it remained for 47 years. In 2011 it was deacessioned by the Smithsonian to the Johnsville Centrifuge and Science Museum, who returned it to Warminster on the 50th Anniversary of Alan Shepard’s flight (May 5, 2011). It is now on public display at the Penn State Anechoic Chamber site at 300 East Bristol Road in Warminster, PA.

The Johnsville Centrifuge and Science Museum can be contacted at PO Box 2014, Warminster, PA 18929. More information is available at www.nadcmuseum.org

The Center would like to thank the staff of the Johnsville Centrifuge and Science Museum for their assistance with this article.