Spread Your Wings and Fly

The desire to fly is an idea handed down to us by our ancestors who, in their grueling travels across trackless lands in prehistoric times, looked enviously on the birds soaring freely through space, at full speed, above all obstacles, on the infinite highway of the air." —Orville Wright 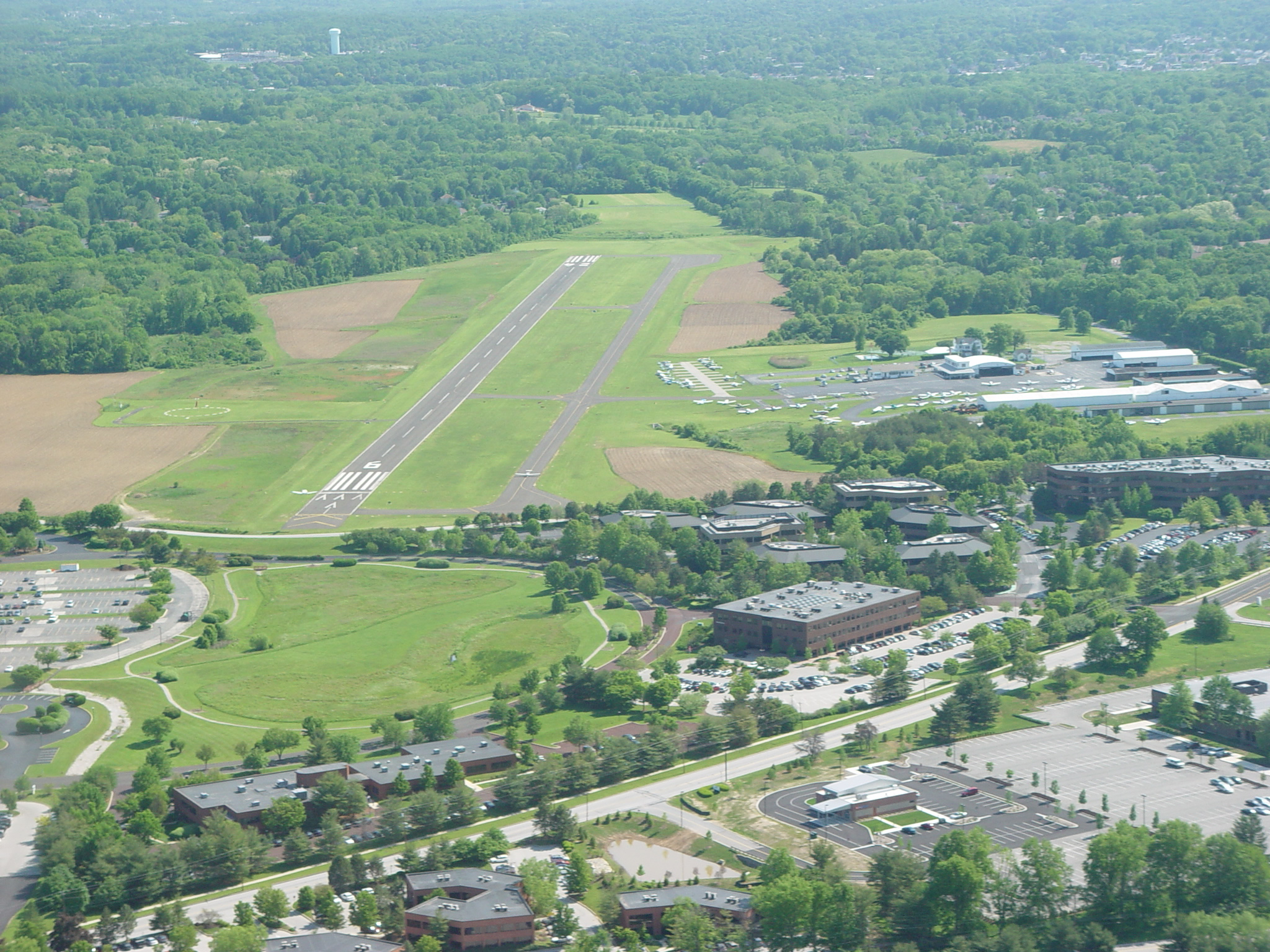 Mackenzie Cavanaugh
Wings Field in Montgomery County is one of the oldest privately owned airports in the country.

It was a November day in 1929, when Lewin Barringer was forced to make an emergency landing after the OX-5 engine of his Curtiss plane failed. He landed in the field of a farm just north of Norristown. At the time, flight was still fairly new; therefore, it was very common for pilots to make emergency landings, especially on fields. He refueled and continued northeast to Pitcairn Field. Halfway to his destination, Barringer spotted a field that would have been perfect for his landing and ideal for a future airport.

Eighty years after its opening, Wings Field in Blue Bell, Montgomery County is, according to its autobiography, “one of the oldest continually operating, privately-owned, public-use airports in the United States.” During the 1770’s; however, what we now know as Wings Field was owned by John Jones as a dairy farm. It wasn’t until May 23, 1930, almost a year after being “discovered” by Lewin Barringer, that the land became an airport. Barringer’s business associates and co-founders of the Wings Corporation of Philadelphia, Jack Bartow and John Story Smith, agreed that Wings was the perfect place for an airport because of its location, flat meadow, and surrounding buildings. Their current location at Central Airport along the Delaware River was too far from the Main Line community, therefore; John Story Smith purchased the Wings Field property, naming it “Wings Port.” Less than a year later; however, Smith sold the property to his company Wings Field Inc. 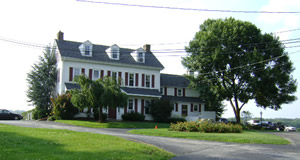 PACC
The Philadelphia Aviation Country Club brought many of Philadelphia's elite to Wings Field in days gone by.

After its inception, Wings Field became immensely popular due to the growing interest in flying and the popularity of Charles Lindbergh after his record breaking solo flight across the Atlantic. It was used as grounds for developing and testing new inventions, a flying school, and a home for the social center of aviation enthusiasts. On April 24, 1932, The Philadelphia Aviation Country Club was opened at Wings Field to serve as a place for pilots and flight enthusiasts to socialize, much like the country clubs for golfing. According to a 1933 Ambler Gazette excerpt “Wings Aviation to Elect Officers,” the PACC “is composed of air-minded members of socially prominent Philadelphia families.”

Originally when only the wealthy could fly, families such as the Wannamakers (department store magnates), the Strawbridges (also department store owners), the DuPonts (chemical products heirs) would frequent the PACC. From then on, Wings became a celebrity hot spot. Some of the many visitors have included Presidents Eisenhower and Nixon, Bob Hope, Frank Sinatra, Elizabeth Taylor, Arnold Palmer, and Jack Nicklaus. According to a recent interview with Bob Mueller, a member of the WFPA Board of Directors, both Amelia Earhart and Pete Conrad, the third man on the moon, learned and practiced flying at Wings. Earhart was taught how to fly the PCA-2, a locally manufactured aircraft. Conrad would skip school to learn and practice flying at Wings.

Five years after the PACC opened, its members formed the Aircraft Owners and Pilots Association (AOPA). The AOPA is the world’s largest civil aviation organization. The organization describes itself as a nonprofit organization that works “to keep aviation fun, safe, and affordable.” The creation of this organization drew even more aviation aficionados to Wings. The PACC and AOPA’s popularity made it possible for Wings Field to be home to many great inventions and developments in aviation, beginning with those of Wings Field co-owner Jack Bartow. 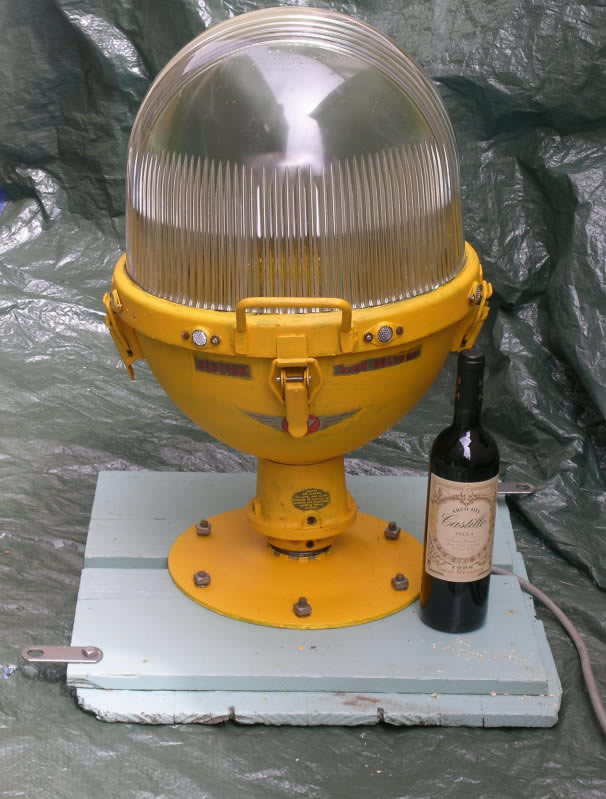 Graham Crisp
A vintage Bartow Light outlined the runway without blinding the pilot. The bottle is meant to demonstrate the relative size of the Bartow Light.

According to the Wings Field Autobiography, Jack Bartow, one of the original owners of Wings Field, “invented, tested, and perfected runway lighting and the rotating beacon that have become fixtures at nearly all public airports.”Bartow created the Airways Beacon, the first navigation system to help pilots at night. His beacons were used during World War II to help pilots in bad weather conditions. He also invented the flood lighting for hangers and flashing beacons for runways. All of Bartow’s inventions were tested and first used at Wings Field.

In addition to Bartow’s help during the war, Butler Aviation Services, one of the largest suppliers of aircrafts, was relocated to Wings Field. In 1940, the Civil Aeronautics Authority was moved to Wings Field. Also during this time, Civil Pilot Training was being provided through Wings. Both the CAA and CPT were established to teach people how to fly in a war and, if needed, for rescues. Wings Field also housed the Civil Air Patrol and the AOPA’s Air Guard and Emergency Pilot Registry. All three organizations were established to help in emergency situations and rescue missions.

After the war, Wings Field was transformed from a mostly private airport to a corporate airport. As Bob Mueller said, Wings Field became the “Mecca of corporate aviation.” It was the home of corporate flying. World War II planes, such as the Beech D-18s, were converted and sold out of Wings. Former Wings Field Manager Tom Dougherty stated in the 2006 Wings Connections article “Flights that Save Lives,” “Wings’ central location in the suburbs north of Philadelphia has made it a magnet for people doing business. A large proportion of the aircraft based at the field today are owned by area business people who use their airplanes as a tool to provide better service for their customers.”

Along with the start of corporate flying, came the corporations and a new wave of invention. In 1945, James Riddle, A. Rufus Applegarth Jr., and Ernst Garfield founded the National Aeronautical Radio Corporation (Narco) at Wings. Their goal was to create radios for general aviation aircrafts and until recently their radios were used before being replaced by GPS. After Narco’s invention, Laird David formed the first radio repair shop at Wings. A. Rufus Applegarth Jr. eventually broke away from Narco to open Aradar Instrument and developed an instrument that told pilots their distance from the ground. 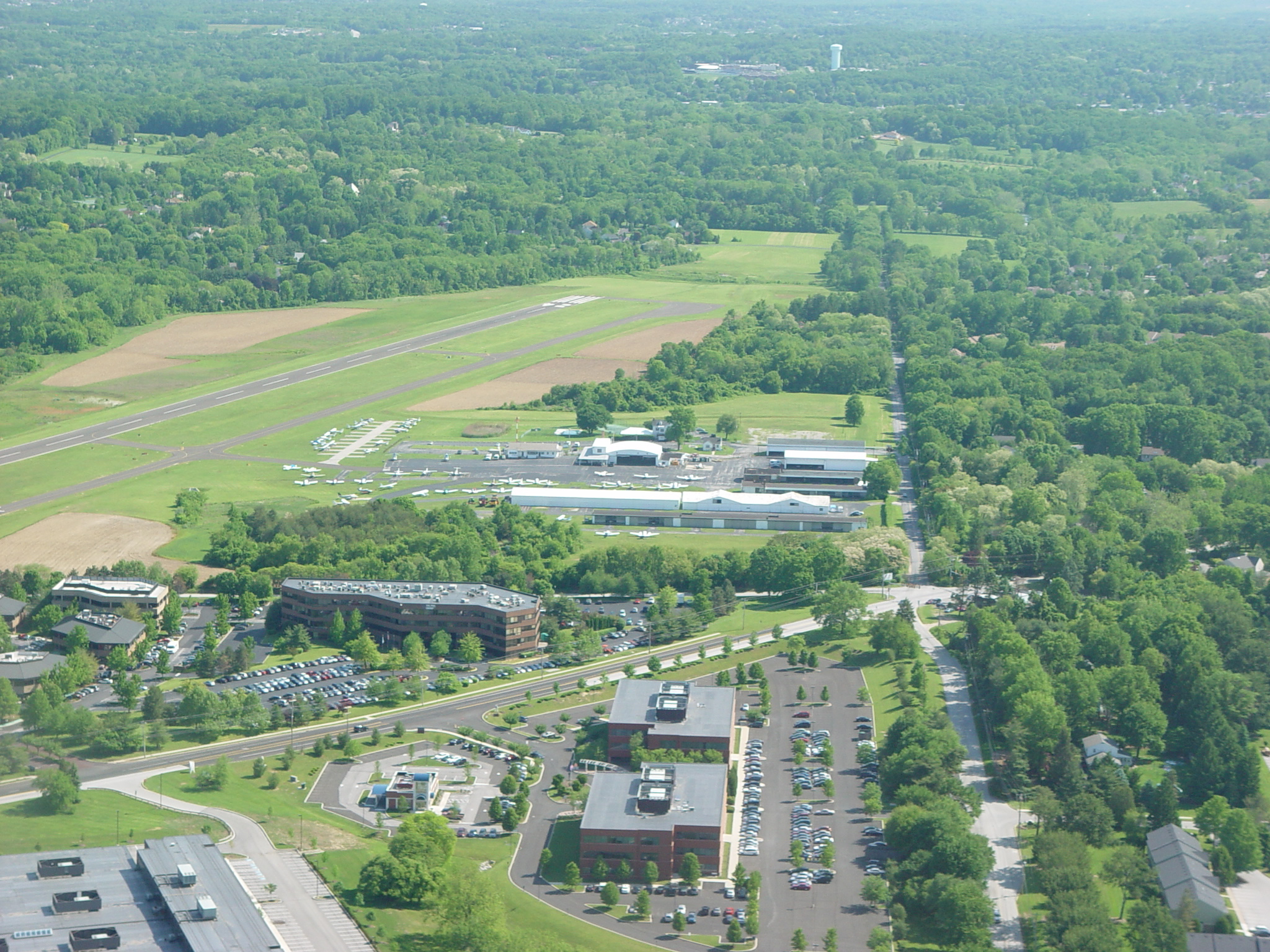 Mackenzie Cavanaugh
Hangars at Wings Field are homes to many private jets in the Philadelphia area.

In 1946, the first Brantley helicopter, created by Newby Brantly flew at Wings. Wings continued to be a testing ground for Brantly’s helicopters and other developments in helicopters during the 1950’s. Also during this time, William Harcum and Gene Guther started TactAir Inc. at Wings. TactAir Inc. created a “tactile signal device” for controlling planes, and a “stick shaker” to warn pilots when their air speed was in the danger zone, a wing leveler, and a capability for rudder control.

A year later, in August 1992, a group of locals founded a non-profit called Angel Flight East after the devastation of Hurricane Andrew. The organization is still around today. They provide “Compassion Flights” to the critically ill; carry blood, tissues, and organs to those in need; and provide relief during disasters. Immediately after September 11, 2001, they were granted permission to transport resume personnel and dogs and medical supplies. They did the same after Hurricane Katrina hit New Orleans in 2005.

Starting in October 1996, the University of Pennsylvania Health System followed Angel Flight East and based their fleet, PennSTAR Flight, at Wings. PennSTAR began in the late 1980’s with five bases. Their crews are available twenty-four hours a day and 365 days a year, except in bad weather.

In the 1980s, local farms disappeared and neighborhoods moved in, generating new problems for Wings Field. Noise became a big issue and the neighbors challenged every update Wings attempted. It became a challenge for Wings to stay alive. According to the 2001 article “Wings Field wins state court fight” in The Times Herald, “Residents were outraged in March when the FAA announced that it had awarded the partnership $3.4 million in grant funds to extend the airfield’s runway and to perform a noise study.” 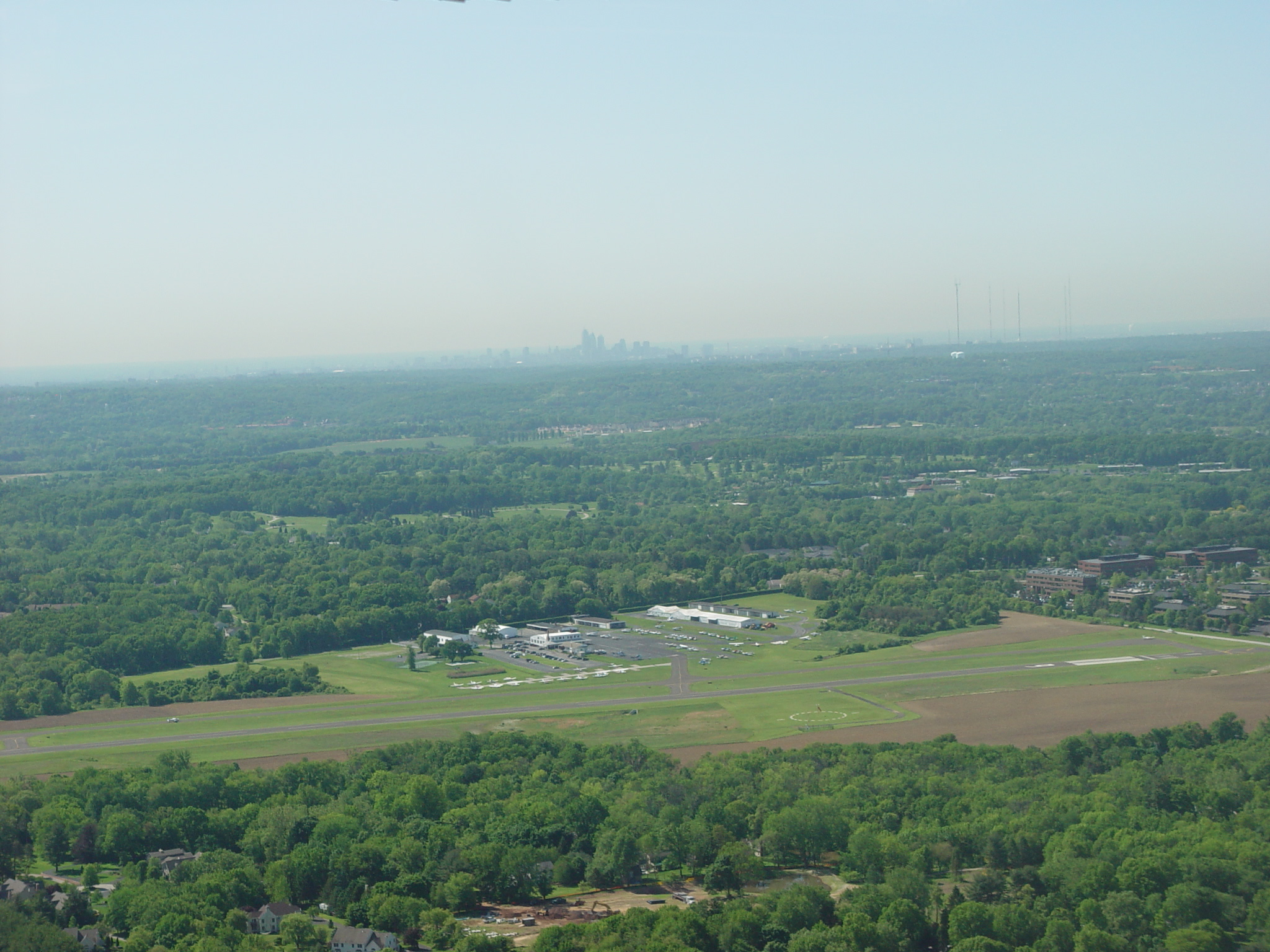 Today, Wings Field or simply Wings (as the local and employees refer to it) is owned by the Wings Field Preservation Associates, LP (WFPA). The partnership, which began in 1995 and purchased Wings on October 30, 1998, is compromised of forty-five individuals, corporations, and concerned citizens. The purpose of the WFPA is to preserve the field while improving the 217 acres that composes Wings. They do not, however; actually operate the airport. The operation of Wings is controlled by a Fixed Base Operator (FBO) and regulated by the FAA and the Commonwealth of Pennsylvania’s Bureau of Aviation.

The WFPA has recently been working with the community to help with the noise and other issues. Some future changes include a transient parking apron, new and updated hangers, and fixed zoning problems. The transient parking apron will provided a place for visiting airplanes to park. The current parking situation requires the plane to rev their engines in order to climb a hill. The new parking apron will not require that climb and will, therefore, reduce noise. After ten years of planning, it will be ready within the next year.

If Bob Mueller could tell his disgruntled neighbors one thing about Wings Field, he would say, “Don’t think of Wings as an airport.” This may seem a little strange, but he wants the people to understand that Wings is a transportation center similar to a gas station. Wings is home to 12 aviation related businesses and employees over 60 people. The Philadelphia Aviation Country Club is still housed on the Wings property, though today it operates only as a restaurant. Today, it is the largest tract of open space and the only working farm in the township of Whitpain. Despite some recent resistance from neighbors, Wings Field has remained an important part of aviation and Pennsylvania’s history. Lewin Barringer would be proud of life his ideal airport has built over the past 80 years.