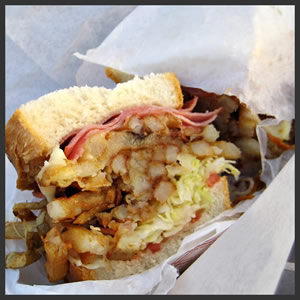 Steak, cheese, egg, fries, coleslaw, tomatoes, and bread. Separately these items may not seem too intriguing, but when combined, they create a mountain of taste. In "The Steel City," the people are known all over as tough, gritty, blue-collared factory workers who bleed black and gold for the Steelers, drink Iron City beer, and sing along to hometown hero Donnie Iris in their distinct dialect. One more thing that stands out to anyone who has been to "The City of Bridges" is the famous Primanti Brothers sandwich, a must-eat experience for anyone near Pittsburgh. These remarkable sandwiches have been filling the stomachs of Pittsburghers for over 75 years.

It all began at the height of the Great Depression when Joe Primanti started selling sandwiches to truckers, steel workers, and other blue-collar employees from his cart in downtown Pittsburgh. In 1933, Joe and his two brothers, Dick and Stanley, and his nephew John DePriter, decided to expand to a small restaurant on 18th Street in the Strip District where it still is today. Joe's mother was even in on the family business. She made sandwiches daily in her own kitchen and delivered them to the restaurant.

The Strip District is a mile-long "strip" of land located on the Allegheny River, which is home to some of Pittsburgh's greatest and well-known eating and dining areas. This was a prime location for Joe and his brothers not only because it was in the heart of the food mecca for the city, but also because the drivers who transported fish, meats, and produce to the restaurants, were the people these sandwiches were designed for. These drivers passed through The Strip on a daily basis since the other restaurants were in need of the freshest supplies for their own food venues. After one of their routes, or during a break, drivers could just swing by and grab a quick bite on the go. 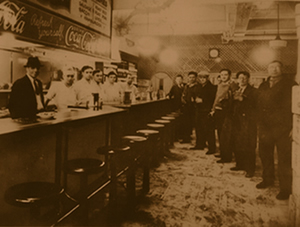 Primantibrothers.com
Joe Primanti, his employees, and some patrons in the 1940s.

The blue-collar workers in the city had little time for a sit down meal, so the thought of an all-in-one sandwich to eat on the run was ideal. A trucker could have the sandwich in one hand and the wheel in the other. Joe Primanti's nephew, John DePriter, said, "One winter, a fella drove in with a load of potatoes. He brought a few of 'em over to the restaurant to see if they were frozen. I fried the potatoes on our grill and they looked pretty good. A few customers asked for them, so I put the potatoes on their sandwiches." DePriter just piled the meat, coleslaw, and potatoes on to the sandwich and smashed it all together and the workers and truck drivers loved it. It did not take long for this sandwich piled six-inches high to capture the hearts, and taste buds, of all Pittsburghers.

In the 1940s, Joe Primanti had to move to California due to complications with his health, but left the business in the capable hands of his brothers and nephew. In the early 1970s, Stanley and John passed away, and Dick was forced to shut down the business. People who had heard of the sandwich, and wanted to indulge in one, were devastated to hear of the closing.

People who did not live in the city did not hear of the closing right away. In fact, some came to the restaurant in the Strip and were stunned to see that Primanti's was no more. Jim Patrinos was one of these patrons. He had eaten at Primanti Brothers as a child and was excited to return 12 years later. Excitement turned into shock when he discovered the wooden doors locked, and a notice in the window describing the closure. Immediately he knew he had to do something. Patrinos contacted the only surviving Primanti brother, Dick, and purchased the small restaurant and the Primanti name. Not wanting to deviate from the original plan of the restaurant, Patrinos used the original recipes, and rehired much of the original staff. He was so eager to please the people of Pittsburgh that he worked all around the clock, sleeping in the stockroom many nights, just to re-open in as soon as possible. Patrinos had to alter a few things to keep up with new health regulations, but wanted to keep the original allure that the Primanti brothers had built. Finally, his hard work paid off and Primanti Brothers re-opened in 1975. 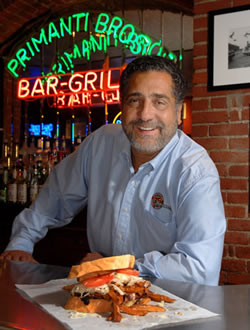 With the restaurant's popularity growing, Patrinos decided to extend the hours to all day, every day. Patrinos also decided to open another restaurant in the Oakland neighborhood, to draw in more college students from the University of Pittsburgh, as well as doctors from the University of Pittsburgh Medical Center. The business soared to heights that even Patrinos had not foreseen. He continued to expand to new locations, including the South Side, in Market Square, and at the current stadiums: PNC Park, home of the Pirates, and Heinz Field, home of the Steelers. In 1998, Primanti Brothers began expanding to the suburbs of Pittsburgh including Cranberry Township, Robinson Township, and Pleasant Hills. The restaurant has even opened up multiple locations in Florida.

Florida may seem like an unusual choice for additional restaurants considering there are no others outside the greater Pittsburgh area; however, it is close to home for Patrinos. He owns a house in Florida and saw that a local pizza shop was closing. He decided to buy it and turn it into a Primanti Brothers restaurant. Patrinos currently has two restaurants open, with hopes of a third in the fall of 2009. The Florida locations also capitalize on the nostalgia of retirees and other "snowbirds" from Pittsburgh who live in Florida during the winter months. Patrinos has considered branching out a little farther from Pittsburgh, but does not want to go too far. According to Amy Smith, of the sales and marketing department, Patrinos does not want to lose the integrity of the restaurants by making it too centralized of a franchise. This includes buying ingredients from local vendors to maintain freshness, rather than having them shipped in from a corporate warehouse and losing the Primanti Brothers' special taste.

Fresh ingredients are essential to the quality of taste in the sandwich. Primanti's makes their own french fries in vegetable oil each day. The coleslaw is cut from fresh cabbage in the store's kitchen on a daily basis as well. The bread, the keystone of the sandwich, is brought in at least two times a day from local vendors. While it may not be the healthiest thing to eat, Jim Patrinos says, "I think people would be surprised to know it's better for them than they might think."

Patrinos believes in staying true to the roots of Primanti Brothers, as well as maintaining a sense of nostalgia with the customers. Many of the employees act as if they were family, and some actually are. Toni Haggerty has worked for Patrinos for 32 years. "We're like brother and sister," said Haggerty of Patrinos, "He'll help anyone." Though Patrinos may seem like her brother, her true brother, George Corradetti, has worked alongside her for the past 21 years. 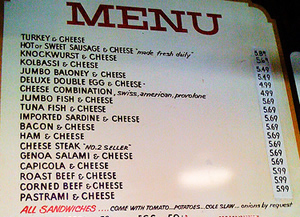 Another signal of the continuity of the Primanti Brothers restaurants is the menu; the one in the 18th Street shop has been unchanged. "It sets the tone and the atmosphere," Patrinos said. "It's more of a family environment, the Strip in particular." While many of the other locations have adapted to the times by adding new items such as salads, pizza, and pasta, the original store only serves the legendary sandwiches. Today, the menu has over 20 different meats to put in the sandwich including a colossal fish, which is 9 ounces and over a foot long. "That's the size of a shoe," says Adam Richman, host of the show Man v. Food on the Travel Channel, as he touches his fingertips on each side on the beer-battered fish. (View the segment from Man vs. Food as posted on YouTube here) The Pitts-Burgher cheese steak is the most popular sandwich, according to the employees of Primanti's. Unlike the cheese steak from Philadelphia with its thinly sliced pieces of beef, this Pittsburgh favorite consists of a thick hamburger patty buried beneath the essential toppings for any Primanti Brothers sandwich.

Primanti's has also been featured on various travel network television shows. Adam Richman, host of Man v. Food, visited the renowned restaurant in 2008 to see what went into the sandwich and to try one for himself. His gaze was fixed on Toni Haggerty, head chef and manager of the 18th Street restaurant, as she fried some capicola ham, eggs, and cheese, and assembled the messy ingredients together on two slices of fresh, soft, chewy Italian bread. Last but certainly not least, Haggerty smashed fries, coleslaw, and tomatoes on top, wrapped it in wax paper, and served. Richman had difficulty just holding the six-inch pyramid of food together without the contents falling out of the breaded lid. 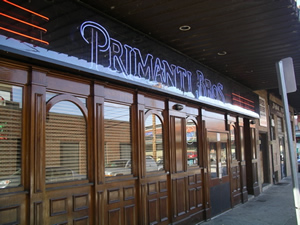 Celebrities make a point to treat themselves to the Pittsburgh delicacy when they are in town. The restaurant in the Strip has a wall of caricatures of many of the celebrities that have entered the big wooden doors. During the campaigns for the 2008 Presidential Election, Senators John McCain and Hillary Clinton graced the local restaurant. Movie stars such as Seth Rogan and Michael Keaton have dined there, as well as sports figures including John Madden, Joe Montana, and many of the current and former players from the Pittsburgh franchises. Even Mr. Fred Rogers has stopped by the neighborhood to have a sandwich. Martin Starr, an actor from the movie Knocked Up and the television show Freaks and Geeks visited while filming Adventureland, set in Pittsburgh. "Primanti’s?" says Starr. “Yeah, those sandwiches were incredible, with a little bit of ketchup on the side. ... amazing with the coleslaw and the french fries. Blows your mind.”

After celebrating its 75th anniversary, Primanti Brothers is still going strong. It was recently given the honor of an "American Classic" by the James Beard Foundation; a non-profit organization that explores the way food enriches the lives of Americans and everyone who tries American cuisine. (View the Beard Foundation video on Primanti Brothers as posted on YouTube here) The city itself has honored the restaurant as well, naming the road in front of the original store "Primanti Way." Primanti Brothers began as a small secret in the Strip, and grew into an icon of the city over the years. "I knew (Primanti's) was famous," said Jim Patrinos, "I didn't know it would become iconic."