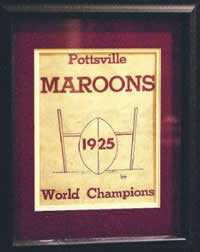 On December 6, 1925, a young football team called the Pottsville Maroons crushed the Chicago Cardinals in what was widely considered to be the 1925 NFL championship game. The Maroons were only playing their first season in the fledgling National Football League, but they had already taken the league by storm, racking up a 9-2 record. The Chicago Cardinals were 9-1-1 heading into the showdown with the Maroons. At the time, the NFL did not have an official championship game. The 1925 championship was simply awarded to the team with the highest win percentage at the end of the season, and Pottsville was clearly the champion.

Despite finishing the 1925 season with the best record in the NFL, however, the small town of Pottsville was not awarded a league title. Because the Maroons scheduled an illegal game shortly after winning the title, the 1925 trophy went to the Chicago Cardinals, the second place team in the NFL. The controversy over this "stolen" crown is a major source of contention between Pennsylvania and the NFL to this day.

The story of the Pottsville football team begins shortly after the First World War. In the early years of the twentieth century, American football was a growing young sport. Battles on the gridiron were becoming very popular across the county. One section of the country that was developing football fever was the Northeastern Pennsylvania coal region. Several coal towns in Pennsylvania, such as Gilberton, Edwardsville, Coaldale and Pottsville, formed football clubs to play in what was known as the "Anthracite League." 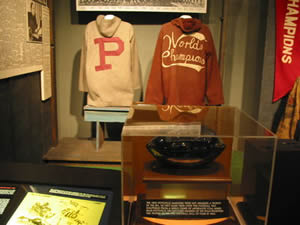 Competition was so strong in the Anthracite League that some teams began to attract national talent. Pottsville was the strongest of the coal teams, due in large part to its ability to bring in some of college football's best players. Local Pottsville businessmen sponsored the team and provided the financial support needed to draw star collegiate athletes. In 1923, Pottsville attracted Benny Boynton, who was regarded as the best quarterback in college football at the time. The team also landed Carl Beck, a stupendous halfback from Penn State. A young reporter named John O'Hara, who would go on to become a world-famous novelist with Appointment in Samarra, covered the team for the local newspaper.

The 1924 season saw the birth of the Pottsville football team's nickname. Just before the first game of the season, owner John Striegel decided the team needed new jerseys and quickly ordered 25 from a local sporting goods store. Striegel told the store owner that the color was not important. The team was sent 25 maroon colored jerseys, and they became known as the Pottsville Maroons immediately thereafter. 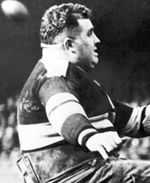 By the end of the 1924 season, Pottsville was quickly becoming a major football powerhouse. The team was also attracting the attention of the recently formed National Football League. Pottsville claimed the 1924 Anthracite League crown after compiling a 6-0-1 record in league play and a 5-0 record in non-league play. Anchored by Hall of Fame tackle Wilbur Henry, Pottsville scored an astounding 274 points that season, while the team's opponents scored a total of seven points all year.

After his team's dominating performance in the 1924 season, Striegel knew his club was good enough to join the NFL. The NFL was willing to grant Pottsville a franchise. Unfortunately, the team did not have enough money at the moment to purchase the franchise from the league. The Pottsville community stepped up, and soon the town had raised enough money to buy a franchise from the NFL. Professional football had officially arrived in coal country.

Pottsville immediately established dominance in the National Football League. In their first professional football game with the league, the Maroons rolled over the Buffalo Bison by a score of 28-0. Pottsville went on to shut out six more teams in their inaugural NFL season. By the end of November, Pottsville was in second place in the NFL standings with a 9-2 record. The Maroons headed into their second to last game of the season with the first place Chicago Cardinals to battle for the 1925 NFL championship.

The game was a crushing victory for the Maroons. The Chicago Tribune wrote, "In the face of a driving attack by the Eastern eleven, the Cardinals curled up and were smeared in the snow on the gridiron at Comiskey Park yesterday, 21 to 7." Elsewhere in the league, controversy was brewing.

The nearby Frankford Yellow Jackets were, in 1925, the top professional football attraction in Philadelphia. Earlier in the season, the Yellow Jackets had upset the Pottsville Maroons at home by a score of 20-0. Believing they were the inevitable 1925 champions, the Frankford team signed a contract with a Philadelphia promoter that allowed the best NFL team in Pennsylvania, whoever it might be, to play a non-league game against a team of former Notre Dame stars. The game would assuredly draw a large crowd and would generate plenty of ticket revenue for the NFL champion. After the Yellow Jackets were beaten by Pottsville later in the season, they lost the right to play the Notre Dame stars.

When the Pottsville Maroons clinched the NFL title, they were eager to cash in on the exhibition game against the Notre Dame team. Instead of playing at the Maroons' tiny home of Minersville Park, the game was scheduled at Shibe Park in Philadelphia. Pottsville expected a large turnout and wanted a full house in a large stadium. There, after a hard-fought and extremely tight game, Pottsville held on to beat the Notre Dame stars by a score of 9-7.

League president Joseph Carr agreed with the Frankford protest. Prior to the Pottsville-Notre Dame match, Carr had warned the Maroons three times not to play the game. Carr fined Pottsville $500, suspended the team's right to the championship, and revoked the Pottsville NFL franchise. After just one season in the NFL, Pottsville had gone from world champions to a disgruntled team in exile.

Once Pottsville had been eliminated from the standings, the Chicago Cardinals were left with the highest winning percentage in the NFL. Chicago, however, refused to accept the title. Chris O'Brien, the owner of the Cardinals, said that would only accept the title if it was clearly won on the field of play. No championship title was officially awarded that year, but the NFL currently recognizes the Chicago Cardinals as the 1925 champions.

In order to keep the exiled Pottsville from joining the rival American Football League, the NFL reinstated the Pottsville franchise in 1926. The team finished with a 10-2-1 record, which left the Maroons in third place for the season. It was Pottsville's final winning season. By 1928, the Maroons were losing money and losing football games. The team finished the 1928 season with a 2-8 record and vanished from Pottsville the next year. The franchise was sold and moved to Boston for one year, where the team was renamed the Boston Bulldogs. With the onset of the Great Depression, the franchise folded for good after just one unsuccessful season in Boston. 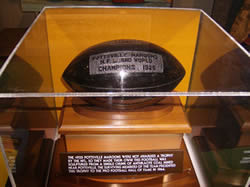 "Coemgenus" - Wikimedia
In 1967, surviving members of the Maroons carved their own championship trophy out of coal and presented it to the Pro Football Hall of Fame, where it can be seen today.

In the years that have followed the spectacular 1925 season, Pottsville residents have tried in vain to officially claim their "stolen" NFL championship crown. In 1964, surviving members of the team carved their own championship trophy out of a chunk of coal and presented it to the Pro Football Hall of Fame. The trophy can now be seen their in the Pottsville Maroons exhibit.

In 1967, the NFL created a special committee to investigate the 1925 controversy. The committee brought the Maroon's claim to a team owners meeting that year, where the owners voted 12-2 in favor of keeping the championship with the Chicago Cardinals.

Pottsville did not give up hope easily. The fight for the title continued all the way to 2003, when Pennsylvania Governor Ed Rendell met with NFL officials to discuss the Maroon's title hopes prior to the 2003 owner's meeting. The owners promptly voted 30-2 against even discussing the matter at the meeting. The only two owners that voted in favor of the measure were from the Philadelphia Eagles and the Pittsburgh Steelers. Paul Tagliabue, the NFL commissioner at the time, said he believed Pottsville "was a championship caliber team that ran into an unfortunate conflict with the league's rules." He claimed that it would be impossible to award the Maroons the championship at this late date.

Governor Rendell was furious. He wrote an angry letter to Tagliabue calling the NFL owners a group of "cowardly barons." Rendell berated the National Football League and declared he would have no more communication with league officials until they grant the Pottsville Maroons the 1925 title. The governor ended the letter saying, "I am closing with the wish that every NFL franchise except for the Eagles and the Steelers lose large quantities of money."

Ghosts of the Gridiron
The Pottsville Maroons finished their first season in the NFL with a dominating 10-2 record.

The Pottsville Maroons may never regain their "stolen" 1925 championship, at least not in the near future. For a team that folded more than 75 years ago, the Maroons have still managed to generate a great deal of interest. Pottsville residents are still hopeful that someday the NFL will relent and award them the title they believe rightfully belongs in mining country.