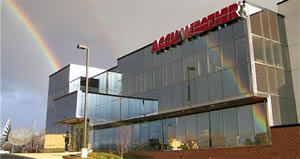 accuweather.com
A beautiful rainbow descends near the AccuWeather headquarters in State College.

To save lives, protect property, and help people to prosper, while expanding AccuWeather as a healthy and profitable business.” That’s a lofty mission statement. Can a weather company actually save lives? According to Dr. Joel Myers, founder of AccuWeather, the company predicted many storms that have destroyed buildings but harmed no one because of AccuWeather’s forecast. In fact, Congress cited AccuWeather as the best forecast for Hurricane Katrina in New Orleans, Louisiana, stating “Accuweather issued a forecast predicting the target of Katrina’s landfall nearly 12 hours before the NHC (National Hurricane Center) issued its first warning, and argued the extra time could have aided in the evacuation of the region.” (USRN)

Nestled in the outskirts of State College, Centre County, lies a large reflective building. Big red letters spell out “AccuWeather.” Inside, one will find 23 radio booths, a large operations room, and a TV studio. This is where weather predictions for the state, country, and even abroad come from. Dr. Myers started AccuWeather in 1962 as a graduate student at The Pennsylvania State University and is surprised that AccuWeather grew to be as large as it is today. In fact, in November of 1996, Dr. Myers needed to move AccuWeather from its original home near the campus to its current location on the outskirts of the borough because he needed more space to expand the headquarters. “He outgrew the borough no matter how you slice it,” Zoning Officer Herman Slaybaugh told Ana Alaya. Dr. Myers’ success was also proved by the numerous awards he has won. 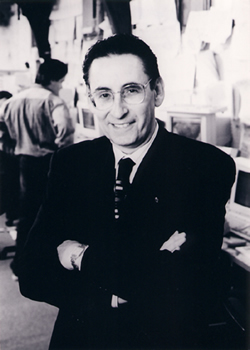 PA Assn. of Broadcasters
Dr. Joel Myers has predicted the weather and made a profit doing it for decades.

In 2004, Dr. Myers won the National Weather Association’s Operational Achievement Award, which “recognizes him ‘for over 42 years of pioneering operational weather support services, products, and techniques contributing to the applications of meteorology and the advancement of the science.” Also, he was recognized in 1997 as one of the 528 greatest entrepreneurs in American history in Entrepreneur Magazine’s Encyclopedia of Entrepreneurs. Dr. Myers’ interest in weather that enabled him to create a service that has become an integral part of many lives and businesses can be traced all the way back to his childhood.

Dr. Myers was quite interested in weather patterns as a young boy. He “used to stand by the window when it snowed.” He maintained a diary of weather conditions when he was only seven years old and would provide his aunt with forecasts by age 11. When he was just 14, he created weather reports and sent them in to the weather service. “Sometimes they used them.” Dr. Myers said. All of the Myers brothers are now in the business. “I was fanatical about weather and they shared it with me,” Dr. Myers explained. “I loved weather forecasting and loved business, [I] put the two together. [I] wanted to make money.” Dr. Myers now spends more time on marketing the company globally as his brother Barry has become the company’s CEO.

AccuWeather began “as a seasonal business for ski areas, natural gas companies, and cities for snow.” It was important during the period of their startup for AccuWeather to provide the most accurate forecasts. They were also the first weather service that didn’t come free. There was much doubt that AccuWeather would prove a successful business. Dr. Myers was “told it was impossible. [They said] how can you get 20,000 prospects before 100 customers.” He kept working hard and following his dream. Luckily he had employees early on in his career that aided in his success. “They believed in my dream and shared it with me.”

Dr. Myers shares the success of his dream through an array of philanthropies. In fact, he donated $2 million to his alma mater to build a weather center. “One of the most critical needs is to keep up to date with technology. That means replacing computer and other information systems every three or four years, just to keep pace with changes in the state-of-the-art,” said William Easterling, dean of the College of Earth and Mineral Sciences. “The weather center also serves as a place to nurture camaraderie among future generations of Penn State meteorologists, a place where they can develop the friendships and shared experiences that contribute to the unique, lifelong bond among our alumni.” 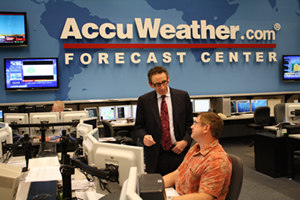 Even with rapidly growing commercialized weather companies like Weather.com on the scene, AccuWeather is not worried. According to Dr. Myers, they “are always working on new creations,” though very few of them get patented. Some of their patents to date include The FirstWarn, Screencrawler, The Accuweather Fax, AccuPop, and StormRisc. “The company had to be vigilant, to fend off advances from The Weather Channel on its traditional media and corporate weather businesses.”

In some cases, however, AccuWeather does not have to compete. In May of 1996, AccuWeather acquired their rival, The Weather Source, which provided forecasting services for hotels. Other acquired rivals include WeatherScan, WeatherLink Software and Total Weather.

“He is clearly one of our great alumni who has held a long and productive career and has done well for himself and the field of meteorology,” William Brune, meteorology department head at Penn State said of Dr. Joel Myers. (Causgrove) Still in business after 47 years, AccuWeather now competes with other commercialized weather services. AccuWeather’s future forecast? Bright and sunny.