The Sweep of Time 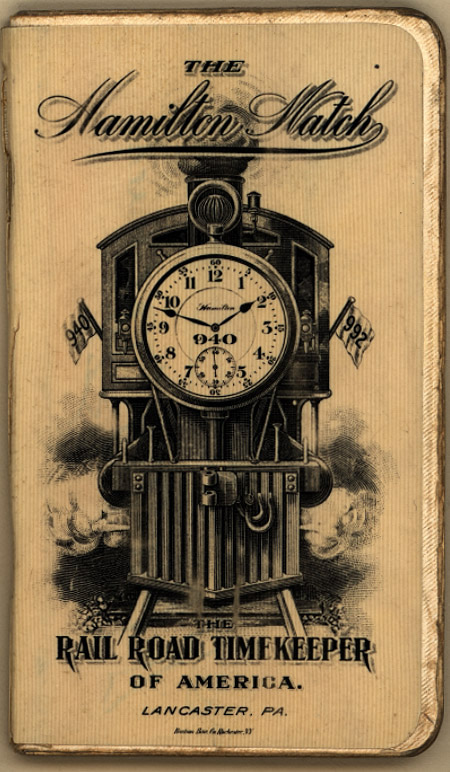 Duke University
See full citation below.
Hamilton Watches pioneered the railroad watches that made the trains safe. They would go on to develop many other innovations in personal timekeeping.

No matter what happens in life, one constant is the ebb and flow of time. It governs our day-to-day lives, and in some industries such as public transportation, people live and even die by the clock. In one instance, in 1891, a horrible train disaster occurred, changing the face of the railroad industry forever. Two trains collided due to one conductor’s faulty timepiece, killing nine passengers. This tragic event resulted in a regulation that timepieces satisfy construction codes before being to be considered ‘railroad watches.’ Only a few watch manufacturers during this period were up to the strains and precision that the job demanded. One of these manufacturers, The Hamilton Watch Company, not only made exceptional rail watches, but eventually would revolutionize the way the world tells time.

The illustrious history of the Hamilton Watch Company started in 1892 in Lancaster, Pennsylvania. From its inception, the company was notable for creating high quality watches on the cutting edge of technology. Originally branded as “The Railroad Timekeeper of America,” the company prided itself on its ability to create watches that kept time with uncanny accuracy. In the latter part of the 20th century, many consumers were wary of buying watches due to accuracy issues. The mechanics of the internal movements within watches were usually never in question, the cogs and springs that forced the time to change were usually made in such a way that, when the gears were wound, the time would change correctly. The quality in question for most watch manufacturers was the individual watch’s ability to maintain accurate time over a long period, without adding milliseconds or seconds every hour or so. Thus, when The Hamilton Watch Company branded itself as a company that manufactured timepieces that were utilized by an industry that relied on accuracy, the railroad business, their sales and company allure was built. By 1930, Hamilton Company catalogs included lines of fabulously decadent wristwatches in addition to its flagship pocket watches. Their main demographic now wasn’t necessarily an ‘average Joe’ rail worker, but a person of stature who could afford a watch that was encased in ‘precious metals.’ 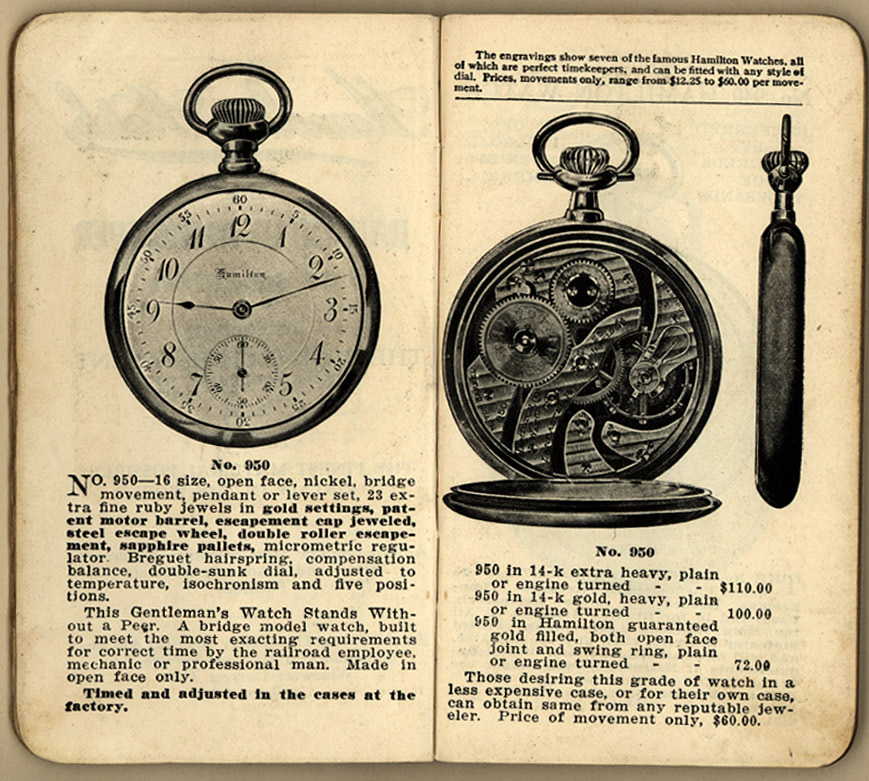 The lot on which The Hamilton Watch Company sat was one square city block in Lancaster, Pennsylvania. To ensure the utmost quality when designing timepieces, they were an in-house operation that saw the watchmaking process from start to finish. Keeping operations in-house ensured quality every step of the way. In the early stages of a watch’s new design, a team at the research and development laboratory on company grounds would plan out the process step by step. By utilizing what they had learned from trial and error from their successful projects, they were successful in revolutionizing the world of watches. Up until The Hamilton Watch Company designed the first electric watch, The Ventura, wrist and pocket watches were wound. In order for the internal movements of the watch to continue functioning, it was necessary for the wearer to periodically wind the timepiece. The world’s most accurate watch was nothing if the operator didn’t keep up with winding.

Within the walls of the Hamilton complex, the research and development laboratory started an exciting new project. The year was 1946, America was had survived World War II and from the experience came new technologies. During the war, miniature batteries were developed and post-war manufacturers in various industries recognized the benefit of these portable power cells. The first electric timepiece made at the plant was created by researcher Arthur E. Fillinger; however, it was not designed as a wristwatch. In order to hone and perfect the method of creating an accurate electronic timepiece, it was first made on a larger scale as a desk clock. For several years Fillinger experimented with numerous components, although the majority of prototypes ran extremely hot due to the internal coils used in the manufacturing process. 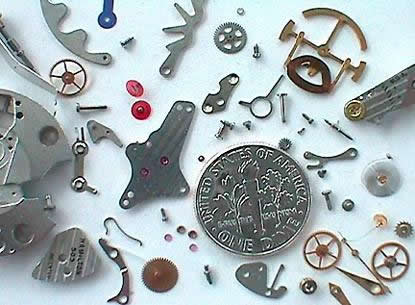 René Rondeau
Hamilton Watches carried its meticulous craftsmanship developed in making hand-wound watches into the new technology of electric watches. Note the ten cent piece to determine the scale of the parts used in this watch.

In 1948, and several patents later, came the Hamilton’s version of an electric desk clock and was presented to an annual sales conference. In this model there were several inherent flaws that made Fred Koehler redesigned the product with a whole new movement in 1950. He was able to take the design of the desk clock and improve it, as well as design a new movement that had the accuracy of a pocket watch, but was only a little larger in size. In 1952, Dr. John Van Horn was familiar with and excited about the project from his research position at Hamilton as a senior physicist, and was eager to see the project’s development. He took the reins of the electric watch project in May 1952 along with James Reese and Phillip Biemiller. The requirements laid out for the team was to create a watch that was roughly the same size as a conventional watch with the same time-telling accuracy as a desk clock, and a battery life of at least one year.

In the 1950s, Hamilton made all of the internal components of their timepieces within the facility. This is different from the way most watches are manufactured today, with many components used for internal movements being outsourced to independent companies. René Rondeau, a Hamilton watch historian and author, has dedicated what he calls the “happiest years of his life”studying Hamilton’s early electrics. When asked about the craftsmanship and design of the first models of electrics, he had nothing but wistful, positive things to say about the company and its watches.

Back in the day, Hamilton made everything in their watches. They made their own alloys, rolled their own steel, formed their own hairspring; they created “boules” of synthetic ruby, then cut, formed, and polished their own jewels; they made their own screws, dials, solid gold dial markers, and everything else that went inside the watch. The only thing they didn’t make was the case. Those were manufactured by other companies. A solid gold Swiss ‘manufacture’ watch costs thousands or tens of thousands of dollars. A solid gold Hamilton, with a superb 19 or 22 jewel movements, made entirely in-house, can be had for a few hundred. Clearly people don’t realize the quality that is in these vintage watches, or realize that they vastly exceed most modern ones. 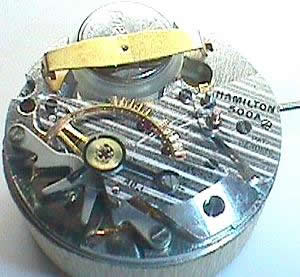 René Rondeau
The addition of the battery to the watch made a lot of the springs and cogs of older models unnecessary.

By 1954, the team developed two prototypes, the PM-1 and the PM-2. Both held up well under the strain of Hamilton testing. The main problem with these watches was not with the internal components or design, however, but with the lack of a suitable power source. Batteries before this time were prone to leakage and did not possess the ability to deliver a steady, unwavering power stream. As a result, the National Carbon Company (now known as Energizer) teamed up with Hamilton’s research teams to create a battery that would hold up to the demands of a wristwatch. With several more watch prototypes designed to coincide with the new battery, one final model was passed for the first round of production.

The main concern of the marketing and public relations arm of Hamilton was to get the first electric watch out to the American marketplace. The members of the research team did not approve of the haste and pressure the marketing department was putting on the project. It was everyone’s goal to create the first entirely electric watch, but the problem was that the internal coils and magnets were yet to undergo long-term testing. The research team suspected that, out of the first few batches of these Hamilton Electrics, a large number would fail. 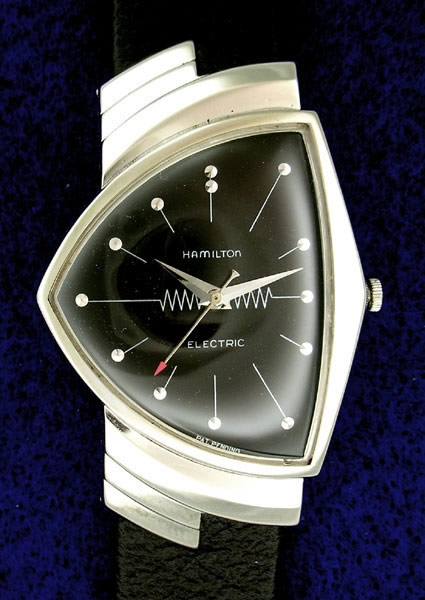 On January 3, 1957, over 120 reporters showed up for the official release of the first electric watch. Amidst gasps from the audience, the first major renovation in motorized time telling in over five hundred years was presented. The styling of this new watch, The Ventura, reflected the space-age dreams of the time period. The casing of the watch is reminiscent of the cars of the era, fashioned to look like rocket ships and space stations. The Ventura’s iconic case was designed by design consultant Richard Arbib with curved lines and dramatic panache. Its original strap was two tone leather and gold, giving it a stream-line look that would draw a glance from anyone to the wearer’s wrist. In today’s world it would be hard to imagine how big a deal this was, but before The Hamilton Watch Company produced the first line of Venturas, every watch had to be wound at a specific interval. The watch’s futuristic design was backed up by a very creative advertising campaign that played along to its sleek, innovative design. One tagline on a print advertisement said, “It’s the perfect gift for the man who looks to the future!”

It was only a matter of time for the first batches of Venturas to come back to the factory with problems. With any new model of a manufactured product, the first run always has unforeseen bugs and glitches that prevent the product from functioning perfectly. This is assumed by any producer, but it was expected by Hamilton with the Ventura. They were in such a rush to get the watch out into the marketplace that they sacrificed finding the perfect set up and composition for the internal movements. In classic Hamilton fashion, models and figures were drawn up to combat the inferior quality of the first batch of watches. It was not long before another line of more prestigious, advanced Hamiltons with better quality magnets and coils to hit the market. Subsequent models after the first batch of electrics such as the Ventura, became even more sophisticated and durable.

With the steep price of the electric watches, customers were naturally upset if their product stopped working correctly. Jewelers were not able to fix the watches and had to ship them back to Lancaster to be repaired by trained professionals. This inspired the Hamilton Education Program, a system of mail order tests and projects for jewelers throughout America to learn about the electric watches. Up to this point, jewelers had no experience working with the internal motion of electric timepieces, so this Hamilton initiative helped the industry come accustomed to the new technology.

Little about early Hamilton Electrics is known by most watch wearers today. Most do not understand how the important step of eliminating the winding mechanisms revolutionized the way people tell time. This jump from winding watches to independently powered electric watches in 1957 took a little over five hundred years to design, all thanks to a company built on a humble city block in Lancaster, Pennsylvania. The allure and mystique of these beautiful and innovative electric timepieces will have watch collectors chasing them for years to come.