A Symbol of Home from a Far Away Land 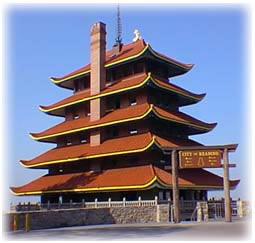 D.P. Reinert, Pagoda Skyline
Completed in 1908, the Pagoda has become a Reading icon.

As visitors come into the center of Reading along Penn Street, they are surprised by an extraordinary sight. An elegant red building graces the hill in front of them. It confidently stands out above the trees, watching over the city below. That it's an elegant building isn't the surprise; what's surprising is that it's a pagoda!

Sitting high atop Mt. Penn, the Pagoda has puzzled residents and visitors to the city of Reading, Pennsylvania, for the last one hundred years. People often ask, "What's that doing here?" Reading Mayor Tom McMahon says "Visitors to Reading will invariably ask about it and we are all proud to trek up the hill and show off our slightly funky icon to the amazement and amusement of our guests." Its unusual architecture makes it an unexpected sight to visitors, but for the locals, it is a symbol of home.

Its story starts in 1906 with William Abbott Witman, Sr. Witman was a businessman and politician in the Reading area. He wanted to be mayor of the city, but two election losses convinced him that his stone quarry atop Mt. Penn, considered an eyesore by the city residents, was the cause of his unpopularity at the polls. Witman wanted to build something to cover the quarry. He got the idea for the Pagoda from a postcard shown to him by his friend Charles Matz, a soldier recently returned from the Spanish-American War. He hired Matz and his father, James, to construct the oriental-style building, and planned to use it as a hotel resort. According to an article in the Historical Review of Berks County, Witman intended the Pagoda to be a replica of the palace used by the Japanese Emperor while he was in exile in 1450, but he may have copied many of the details from a Japanese tea garden at Coney Island, New York. 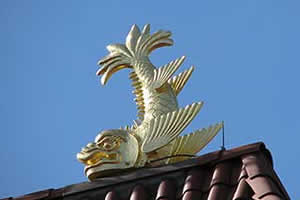 Pagoda Skyline
Images of dolphins were reputed to ward off fire.

Construction of the Pagoda was completed in 1908 at a total cost of $50,000. The building stands seven stories high and 620 feet above the city. Five overhanging rectangular red roofs with upswept eaves at the corners extend from each of the upper levels. Each roof recedes two feet from the one below it. Two gold dolphins with a gargoyle-like appearance sit on the top roof. Legend has it that dolphins, known as shachihoko, could protect a building from damage, especially fire. A torii gate, which looks like an elaborate version of an American ranch entrance, stands at the front of the building. Witman's objective to cover the stone quarry was accomplished, but his plan for the resort never materialized because the county denied his request for a liquor license. The county's rationale for the denial was that the winding roads up to the Pagoda were unsafe for the possibly intoxicated drivers that would travel them.

With his source of revenue slashed, Witman was unable to afford the loan on the building, and Farmer's National Bank foreclosed on it. Jonathan Mould, a bank director, acquired the property in 1910, and in 1911, sold it to the City of Reading for one dollar. The municipality has owned and the maintained the Pagoda ever since. 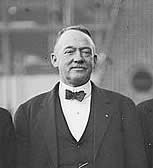 People have frequently used the Pagoda for gatherings, events, and celebrations over the past century. Two popular automobile races, the Pagoda Hillclimb in June and the Duryea Hillclimb in August, are held each summer along Duryea Drive, the road that leads up to the Pagoda. Both races are Sports Car Club of America events and draw large crowds to the Pagoda. Area residents bring in the New Year each year with a fireworks show at the Pagoda. Even the popular movie director M. Night Shyamalan used the Pagoda as a filming location for his upcoming movie The Last Airbender. The Pagoda will serve as an ancient temple in the movie, and it will be used as a school for the children in the cast while filming is taking place.

Reading area organizations identify strongly with the Pagoda. The Reading Police Department and Fire Department's uniform insignias contain an image of the Pagoda. The Reading Phillies, the city's minor league baseball team, wore a patch depicting the Pagoda on the left sleeve of their uniforms in the 2008 season, and a local long-distance running athletic club pays tribute to the building by calling themselves the Pagoda Pacers.

The Pagoda also had an important practical use in the past. A spotlight signal was affixed to the top of it and was used to communicate Morse code messages to the city below. Because the signal used light instead of sound, the signal operators had to make a few adaptations to the code to make the system work. A white light from the Pagoda roof indicated a Morse code dash, and a red light represented a dot. The signal was used to direct firefighters, to relay World Series and prize fight results, and to convey emergency messages to the public. 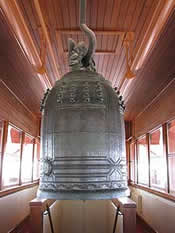 The Pagoda has one more interesting feature. A Japanese bell hanging in the top floor has a story behind it as intriguing as the Pagoda itself. The bell was cast in 1739 in Obata, Japan, by a man named Mikawaya, who, along with 47 other men, presented the bell to the Buddhist temple, Shozenji, at Yakuosan, now part of Tokyo. Witman ordered the bell in 1907 through the A.A. Valentine agency of Broadway, New York, while the Pagoda was under construction. The bell left from Japan, traveled through the Suez Canal, transferred to the Reading Railroad in New York, and arrived in Reading on May 5, 1907. The bell has an inscription of the donors' names and a verse translated from Japanese:

The gong sounds from high on the peak of Yakuosan,
Down in the valley the gong resounds low and deep,
With the moon on high it sounds clearly in the heavens,
With the flowers into the land of the dead it peeps,
It will recall the dreams of the six realms.
All over the lands, all Buddha lands, all over the cosmos,
This sound will leap.

Exactly how the bell left Japan and how much Witman paid for it are unknown. However, Akio Sashima, who was a Japanese student at Albright College during the mid 1990s, did some deeper research on the bell. He was able to trace the origin of the bell back to the Yakuosan-Choshozenji temple, located in the city of Hanno. A short time later, Akio hosted visitors from Hanno, and they got a chance to tour the Pagoda and see the bell that originated in their town.

The Pagoda recently marked its 100th birthday. Quite a lot has changed in Reading over the past century, but the Pagoda has withstood tests of time and continues to amaze everyone who lays eyes on it, from long-time residents to first time visitors.