Take a Peep Inside 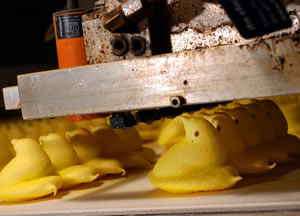 Chicago Tribune
The final stage of Peeps’ manufacturing passes the sugar-coated Peeps through the conveyor belt. Today, the Just Born plant produces millions of marshmallow Peeps in a day.

How many different ways can marshmallow Peeps be eaten? Some people enjoy them fresh out of the packaging, while others prefer them stale and dry. How about warming them up in the microwave until they burst or freezing them to make a "peep-sicle?" There is no wrong way to eat a Peep and thousands of people across America indulge their creative side with the wildly fun marshmallow candy. The ever-popular marshmallow Peep has been satisfying consumers since the Just Born Company opened in Bethlehem, Pennsylvania in the 1950s. Peeps are ubiquitous during the Easter holiday when the shapes of marshmallow chicks or bunnies in bright, fun colors fill the Easter baskets of millions across America.

The tradition of Just Born candy started when Sam Born emigrated from Russia to the United States to fulfill his desire to create chocolate treats. Candy-maker by trade, Sam Born used advanced technology to introduce several inventive ideas to the candy market, including chocolate sprinkles and the hard chocolate coating on ice cream bars. In response to this thriving candy success, Born opened up a small retail store in Brooklyn, New York in 1917. Here Born created fresh candy daily and marketed his treats with a front window sign that stated "Just Born." This sign let customers know when the candy was finished and invited them to come inside to enjoy the fresh treats. In 1932, the Just Born Company moved its headquarters to an empty factory in Bethlehem, Pennsylvania. The company acquired the Rodda Company of Lancaster, PA, a company responsible for a line of jellybeans and marshmallow Easter Peeps, in 1953. Thus began the evolution of the Peeps phenomenon. 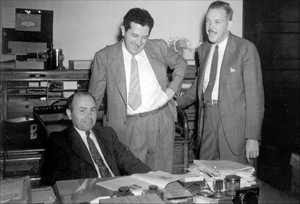 Just Born.com
Company founder Sam Born with his brothers-in-law Jack and Irv Shaffer in the Bethlehem factory in 1932. Just Born has been a family-owned company for three generations.

In the early stages of Peeps production, the marshmallow candies were tediously and individually hand-squeezed through pastry tubes. This laborious process required 27 hours for the creation of a single Peep. When Sam Born's son, Bob, joined the company as plant manager and revolutionized the marshmallow-forming process, production time was cut down to six minutes per Peep, allowing the plant to produce over 3.8 million marshmallow confections per day. This production improvement has permitted further diversification of the Peep line, allowing Just Born to offer Peeps year-round—snowmen for Christmas, pumpkins and bats for Halloween, and yellow tulips during the spring. This advancement has allowed the Just Born Company to become the world's largest manufacturer of marshmallow treats. The manufacturing process of Peeps begins when the ingredients are mixed in a large kettle to create a marshmallow slurry. This slurry is then placed into a mixer until it becomes light and fluffy in texture. The bright colors of the Peeps are created through colored sugar, mixed together until the color is even. Next, a special machine produces the marshmallow shapes, which are squeezed onto conveyor belts covered with the colored sugar. The candies then move through a tunnel that blows the colored sugar around to fully cover the Peeps. The eyes and other details are added to the Peeps last, right before they are packaged and prepared to ship to stores all over the country. Although this process only allows for one marshmallow shape to be produced at a time, many different Peeps shapes can be produced in a single day.

Peeps, which have been the number one non-chocolate Easter candy in the United States for more than a decade, have become a staple in many Easter baskets. Christine Salmon, who grew up near Bethlehem says, "Ever since I can remember, Peeps have filled my Easter basket along with hundreds of shelves in local stores. The bright pink and yellow colors have always caught my eye and the holiday just does not feel complete without them." In order to keep Peeps fans happy, the Just Born company has constantly expanded on its offerings, introducing Peeps decorating kits and Peeps inside chocolate eggs at the Easter holidays, and new shapes and colors year-round. 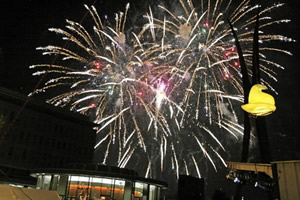 ArtsQuest
A tradition begun in 2005, Bethlehem lowers a fiberglass illuminated Peep to ring in the New Year.

A crucial part of the Peeps story is the new lives they take on after being shipped to shelves. Peeps have increasingly been used in new and innovative ways, such as the topping on a cappuccino or as part of a fondue. Yet even these tasty new ways to try Peeps are only the tip of the iceberg. Peeps have become a cultural phenomenon, honored with their own float in the 2003 Thanksgiving Day parade. Bethlehem, home of the Just Born Company, honors the Peep during its New Year's celebration. Rather than watching the crystal ball drop in New York's Times Square, Bethlehem residents wait to see a four-foot, twenty-five pound fiberglass Peep ring in the New Year. While waiting for midnight, audiences can enjoy their Peep-themed gift bags, which include all the ingredients for Peeps s'mores.

Peeps have transcended their status as just a food product; in fact, they have their own Internet fan following. There are an impressive ninety websites dedicated to the marshmallow candy, including a national fan club and official website, sponsored by the Just Born Company, which offers souvenirs, history, and recipes. Other websites include parodies on movies or television shows such as "Lord of the Peeps," or Peeps interacting with X-Files characters. "They've developed a real personality over time," states Greg Barratt, the company's Vice President for marketing and sales. "They're colorful, obviously. They're fun. They're squishy." 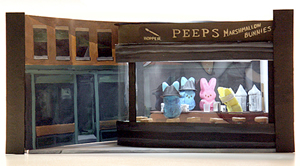 Peeps lovers everywhere have been offered a new way to play with their favorite treat via the Washington Post's Diorama Contest. The contest, which has been running for three years, invites competitors to make a diorama of a famous occurrence or scene. Themes can be either historic or current, so long as all of the characters are played by marshmallow Peeps chicks or rabbits. In 2009, the newspaper received over 1,100 submissions. The 40 semifinalists submitted dioramas, which depicted scenes ranging from the "Miracle on the Hudson," to "Peeptanamo" Bay, to an imagination of a medals ceremony at the "Olympeeps." The winning submission, which re-created Edward Hopper's "Nighthawks" painting, took 45 hours to assemble.

The tradition of the Just Born Company has grown immensely over the years and Peeps have attained near celebrity status. They will continue to appeal to people in more ways than one: decorations for a wreath, toppings on a pizza, sculpted into a masterpiece, or simply enjoyed as a sweet, sugarcoated candy. With recipes and contests devoted to Peeps, it seems the next step is their own store. The Just Born Company will be opening the first Peeps & Co. store in National Harbor, Maryland. Here, customers will be able to purchase Peeps paraphernalia ranging from t-shirts to pillows to pens—and even including Peeps-themed china. There is something about the fluffy, bright-colored marshmallow Peeps that has captured the hearts, stomachs, and imaginations of America. As the obsession with Peeps continues to grow, the Just Born Company will continue to offer new styles of Peeps, while consumers will create even more innovative ways to enjoy them. When it comes to Peeps, the possibilities are truly endless.