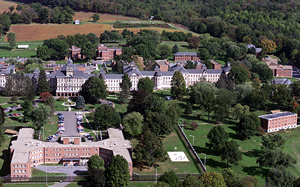 Driving down Market Street in Danville, Montour County, a massive structure from the late nineteenth century comes into view. With its palace-like façade and massive grounds, the building is both impressive and deserving of respect. The first and most obvious question coming immediately to the mind of the viewer is “What is the function of this stunning and slightly mysterious piece of architecture?”

Well, the best answer to that question would be that its function differs dependent on time. But the basic and initial function of the Danville State Hospital when it was built in 1869 was to provide a sanctuary for the mentally ill and act as a participant in each patient’s recovery.

Due to overcrowding in Pennsylvania’s first state hospital for the insane in Harrisburg, the General Assembly felt it necessary to construct two additional hospitals in the state of Pennsylvania. Legislation was passed and Act 49 of April 13, 1868 advised the building commissioners to construct a “Kirkbride Building” as the third state hospital in Pennsylvania. The building was to comply with the standards proposed by The Association of Medical Superintendents of American Institutions for the Insane, an organization founded to improve the treatment of the mentally ill. 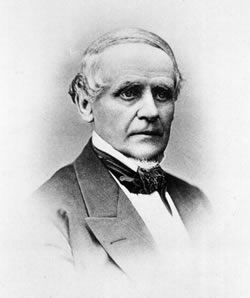 National Institutes of Health
Dr. Thomas Story Kirkbride brought Quaker religion to bear on the care for the mentally ill with his popular facility design.

Commissioners spent a considerable amount of time visiting different places in Pennsylvania to choose the ideal location for the hospital. The site eventually chosen was a farm owned by the founder of Danville, Daniel Montgomery. The farm was near the Susquehanna River, furnishing fresh spring water, as well as a railroad, providing transportation. Within the farm, a supply of stone, clay, and lime would aid in the construction of the hospital. The price tag on 250 acres of land and all of the amenities of its location was $26, 600. Once the location was purchased, next came the design and construction of the “Kirkbride Building.”

At a time in the United States when the government recognized the need for institutionalization of the mentally ill, Dr. Thomas Story Kirkbride became a pioneer. His philosophy about psychosis influenced him to construct an asylum based on the Moral Treatment, a treatment of the mentally ill with kindness and empathy.

Dr. Kirkbride was born on July 31, 1809 in Morrisville, Bucks County. The son of Quaker parents, Dr. Kirkbride was raised on the foundational beliefs of the Quaker faith. The faith focuses on the possibility of God’s presence and action in every moment of life. Quakers also emphasize social testimonies such as the Peace Testimony, the Testimony of Simplicity, and the Testimony of Equality.

The Peace Testimony opposes war and seeks expressions of love and justice in a world of conflict. The Testimony of Simplicity acknowledges that God wishes to have center and order to life and seeks a world of material simplicity. The Testimony of Equality recognizes the importance of brotherhood and sisterhood and the belief that God loves all people. Quakers are also taught to love and respect those considered inferior or alienated by society.

In addition to his religious beliefs, Dr. Thomas Story Kirkbride also believed that the design of the asylum building held a great amount of power. The structure of the building itself, along with landscape influenced behavior and cured disease due to “environmental determinism.” The belief that environmental determinism could cure the darkest and most frightening human aliments led to the rapid expansion of the mental hospital system across the United States in the mid to late 1800s.

From his book On the Construction, Organization and General Arrangements of Hospitals for the Insane, with Some Remarks on Insanity and Its Treatment, Dr. Kirkbride states that:

Having now shown that insanity is a disease of comparative frequency in all communities; that it is one from which no class or condition can claim exemption; that among its most prominent peculiarities is the fact, that as a general rule it cannot be treated as successfully at home, as in institutions specially provided for the purpose, it may be added that these institutions, too, must necessarily be of so costly a character that in only a few localities can private means be expected to provide them; and as already said, for a very large proportion of all those who are thus afflicted, the different States must be looked to not only for the provision of the hospital buildings, but for the means for properly carrying out their care and treatment. 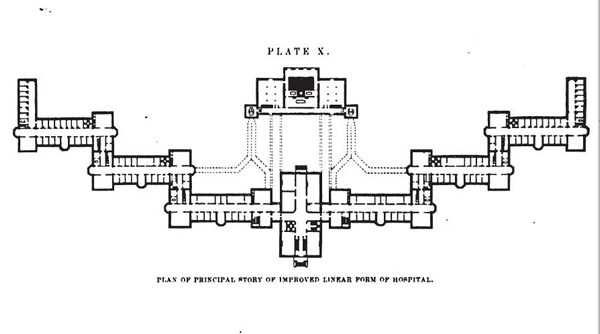 On the Construction, Organization and General Arrangements of Hospitals for the Insane, 1880
Kirkbride's 1880 book, On the Construction... thoroughly detailed all aspects of both buildings and grounds to be used for mental facilities.

Dr. Kirkbride was very detailed about the design of the asylum and fully believed in its healing ability. The design of the asylum can be described as having a cheerful and comfortable appearance with ornamented grounds including trees, shrubs, and flowering plants. The attractiveness of the asylum is meant to impress upon the patient a desire to reside in the building. The basic form of the building consists of a central structure flanked by two wings, resembling the anatomy of a bat.

The wings of the Kirkbride building prove advantageous in many ways including separation of the sexes, maximum amount of light and ventilation in patient rooms, and segregation of patients according to symptoms of illness. Males are housed in one wing while females are housed in the opposite wing to ensure both comfort and protection. Each wing is then subdivided by ward according to symptoms. The better-behaved patients reside in the upper floors closer to the central administrative structure and the more excited, less rational patients reside in the lower floors farthest from the central administrative structure.

Looking at the building from an aerial view, the wings of the building to not extend straight out but rather in a stepwise fashion. This arrangement allows each patient’s room access to windows and consequently fresh air, sunlight, and a view of the ornamented grounds.

Along with design, Dr. Kirkbride believed that management of the asylum was essential in curing mental illness. He thought that removing an individual from the outside world and immersing them in a more ordered world would revert them to sanity. The individual would be free of the over stimulation and stresses thought to cause insanity. They would restructure their daily regimen to include harmony and balance, achieved by exercise or some form of interaction with nature.

Under Dr. Kirkbride’s guidance, asylums rose in popularity but eventually became overcrowded and notorious for ill treatment and poor hygiene. As time progressed, new medicines and methods of treatment were discovered and need for large state hospitals declined. Near the end of the twentieth century, “deinstitutionalization” was the common view of many people in the United States.

Deinstitutionalization, the exact opposite of Dr. Kirkbride’s philosophy, practiced moving patients out of hospitals and back to a home care environment. State hospitals for the mentally ill across the United States saw diminishing patient population in the 1970s through the 1990s. Danville State Hospital was one of the institutions affected by deinstitutionalization with a fall in patient population from 2,801 in 1955 to 103 in July 2010.

Many of the “Kirkbride Buildings” were closed or demolished during the past years, but Danville State Hospital still stands and is fully functioning. Though the practices in the hospital are different from when it was established in 1868, its history is conserved in its architecture.