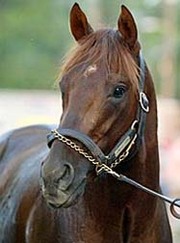 Smarty Jones powered down the backstretch at the 2004 Preakness Stakes, finding his stride and pulling ahead as the excited atmosphere at the track intensified. As Smarty Jones crossed the finish line, the record-setting crowd went wild. This impressive horse from humble Philadelphia beginnings won the second leg of the Triple Crown by the largest margin in history, 11½ lengths, and made his way to the winner's circle amid wild applause. He was the clear favorite going into the Belmont Stakes, and racing experts hailed him as the next great winner of the triple jewels. Though the colt fell short on his shot at Triple Crown glory, he still left an impressive mark on the Philadelphia racing scene.

Smarty Jones is a chestnut stallion born on February 28, 2001 at Someday Farm in Chester County, Pennsylvania. He is owned by Patricia and Roy Chapman and was bred on the farm by his owners. I'll Get Along is his dam, and he was sired by Elusive Quality. Smarty Jones' pedigree includes impressive horses such as Secretariat, Count Fleet, and Man O'War. This spunky colt was named for Patricia Chapman's mother. Much like her mother, a smart aleck child who grew into a strong-willed woman, Smarty was a flippant foal that became a strong willed horse with impressive speed and determination. Originally, Bob Carmak was set to train the colt, but was unable to do so after tragedy befell his family. Due to this misfortune and Roy's failing health, the Chapmans decided to downsize, moving to a smaller farm with only four of their horses.

After moving their base of operations, they enlisted the help of John Servis for Smarty's training. As a two year old, Smarty was saddled and ridden for the first time. He began training as a racehorse, showing a lot of promise. In July, John began starting Smarty in the starting gate. Smarty was afraid of the gate and reared, smashing his head on it. He fell to the ground, unconscious, with blood coming out of his nostrils. After regaining consciousness, he was rushed to the vet, where he was diagnosed with a broken skull. Swelling around his left eye bones meant the horse was unable to see out of that eye for several weeks. A speedy recovery allowed him to spend just three weeks in the hospital. He spent another month recuperating on the farm before beginning training again. By November of the same year, Smarty was ready to begin racing. 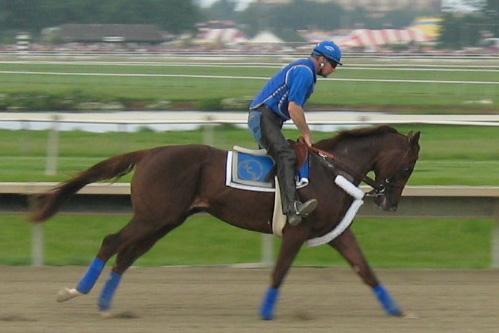 Smarty Jones ran two races as a two year old, winning his first and second starts by seven and fifteen lengths, respectively. A jockey named Stewart Elliot from Toronto became Smarty Jones' rider. Elliot began his career as a jockey at age 16. Now, at age 39, he has over 3,300 career wins under his belt. He began riding at Philadelphia Park in 1981 and has since ridden at tracks up and down the east coast.

As a three year old, Smarty Jones began his year successfully, winning the Arkansas Derby, the Southwest Stakes, and the Rebel Stakes, among others. Going into the Kentucky Derby he was undefeated, the first horse with a perfect record to run in nearly thirty years. On May 1, 2004, he swept the field, making Steward and Servis the first debut pair (jockey and trainer) to win in nearly 25 years.

A flurry of excitement erupted in Philadelphia racing as fans cheered for him going into the Preakness Stakes, the second leg of the Triple Crown. The week before the race, the Philadelphia race track was full of fans and well wishers, with about 4000 people coming to watch the morning workouts. Normally, there are forty to fifty people at the early runs. Fans flocked to watch his fifteen minute run because they felt personally connected to the successful Smarty Jones, born in the area. Their excitement was warranted. Racing experts across the country projected the success of this extraordinary colt.

On May 15, 2004, Smarty Jones won the Preakness in a record-setting run, beating the field by 11½ lengths. He was the clear favorite going into the Belmont Stakes. As the race approached, the mood in Philadelphia was hopeful. Racing commentators called him "the second coming of Secretariat" in a hopeful prediction of the race to come. Unfortunately, he came in a close second to a long shot named Birdstone, disappointing thousands of fans. After the race, many people accused several jockeys of riding, not to win for themselves, but to prevent Smarty from winning.

Regardless, Smarty Jones had a lasting impact on Philadelphia racing, despite his failure to with the Triple Crown. He renewed an interest in racing for Philadelphia fans, and united Philadelphians behind him. As his success grew, he brought people to the track in droves.

Smarty Jones was retired to stud after the Belmont Stakes at age three as a result of bruising in his ankle bones. In his career, he earned $2,613,155 in addition to a $5,000,000 bonus from Oaklawn Park Racetrack. He currently resides at Three Chimneys Farm in Midway, Kentucky, home to many other legendary racehorses. His first foals were born in 2006 and will begin racing soon!