Thoughts on the Making of Pioneer Church

Pioneer Church began with a restoration project with which I was involved at the Old Zion Church in Brickerville, Pennsylvania. Old Zion, an historic landmark building now open just a few times a year, has a long and colorful history and one which typifies the uses to which early churches were put. Not only called to service as a place of worship, Old Zion was a general meeting place, a school, and, during the Revolutionary War, a hospital. While in use as a school students would write their names on the walls up in the balcony. Many of these same names can now be found on beautifully carved headstones in the church cemetery.

In the early 1980's Old Zion underwent some significant restoration and preservation. One part of the restoration project involved replacing a Victorian altar with a replica of the original wineglass pulpit. This pulpit, which rises to the height of the balcony, needed to be painted to match the old white paint found on the other wooden surfaces inside the church (pews, modesty boards, balcony paneling, etc.). The old painted surfaces have a wonderful mellow patina built up over the years through exposure to wood smoke, dust, and "touching" by generations of families in the church. My job, along with the restorer who taught me the art of paint restoration, was to paint the new, bare wood pulpit and make it look as if it had been there for a century or more. Courtesy of www.burbachfamily.org
Visitors to the church inspect the partially-restored interior.

I would arrive at the church early in the morning, open the huge old door with a massive skeleton key, and have the place to myself for an hour or longer. After setting up for the day's work I often had time before the other restorers arrived to wander about the large room absorbing the essense of the place (Old Zion is basically one large room with a balcony around three sides). The light in the church is breathtaking as is the view out the two story windows to the graveyard and valley beyond. The sense of all the lives that passed through Old Zion, the history of the place, wrapped itself around me in the same way that early morning mists rising from the valley often would.

I spent a good bit of time exploring the church building. One morning I discovered some newspapers from the early 1900's in the small dirt sub-cellar. An article in one of the papers gave some history of Old Zion including the tidbit that it had been a stop in the Underground Railroad aiding runaway slaves on their quest for freedom. I became intrigued to know more of the church's past.

Thus began several years of research on the church. I longed to turn the special-ness of this place into a children's book but found I was far too "close" to Old Zion to do justice to the writing of such a story so I turned my notes over to Carolyn Otto. Carolyn produced a beautiful manuscript that captured the sweep of time I longed to see in writing. Then it was my turn. I did more research on paintings from the different time periods covered in the text. My goal was to have the paintings in Pioneer Church mirror the styles that would have been seen at the times discussed in the story. 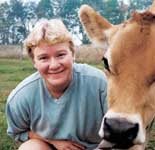 Courtesy of HarperCollins Megan Lloyd has used Pennsylvania scenes and her own farm animals to illustrate over 35 children's books including Pioneer Church.

After three years of painting, Pioneer Church was finally done. It was a labor of love and, I hope, a tribute to a very special place where the past is still quite present.

There are special places like Old Zion all across the country. Finding a place that speaks to the heart, that captures the essence of "home" and makes us feel "rooted", a place where we can palpably feel a part of the sweep of history...where we can be still and know ourselves to be connected to a real place is, I believe, critical to the development of our humanity. I hope children will be encouraged to go outside, to explore their own territory, to discover their own "place" in this world.