A Tradition Born of the Mid-Autumn Moon 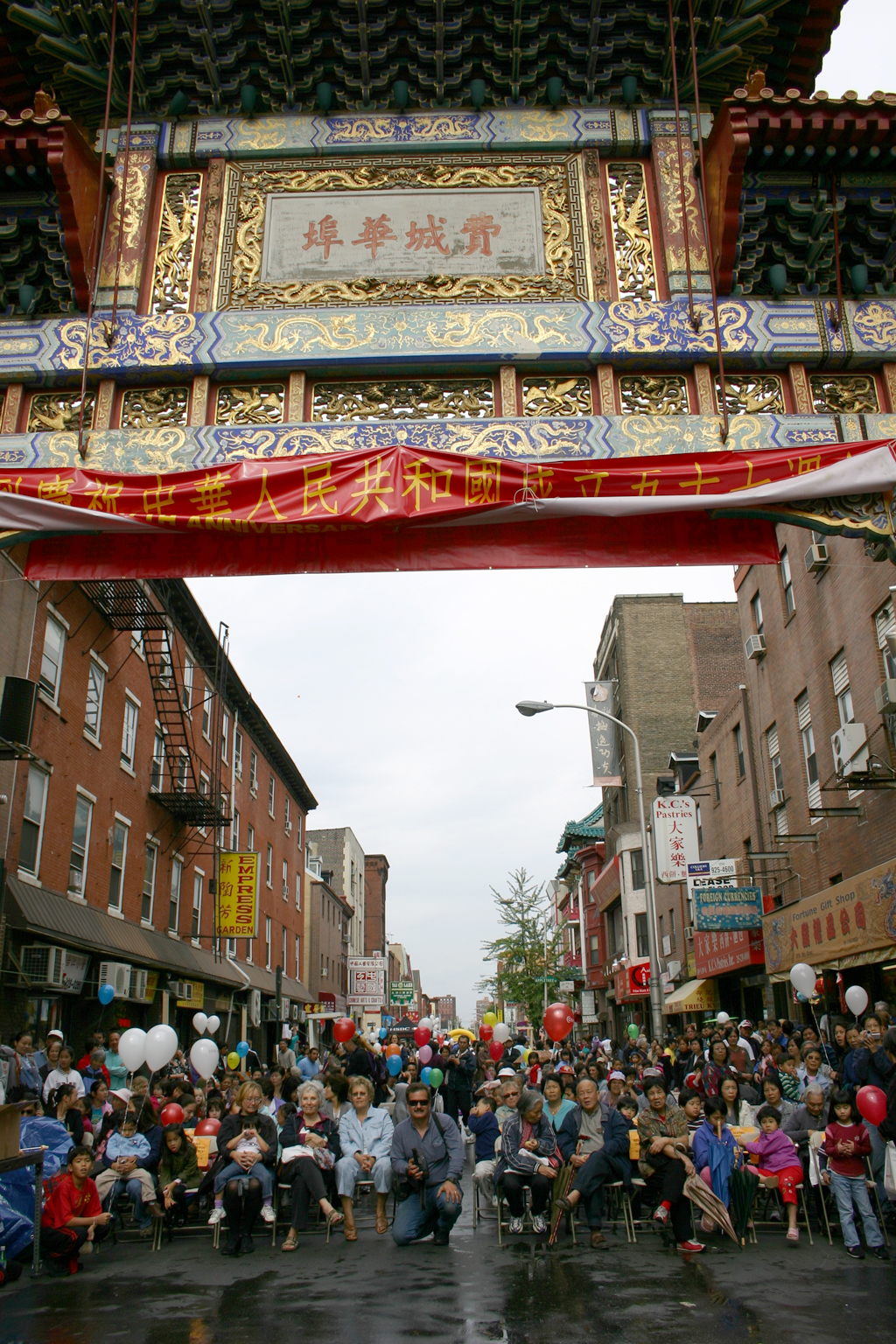 Bret Flaherty and Joan May Cordoba
Mid-Autumn Festival goers enjoying a performance under the gate.

Fifteen years ago a legend was retold of a great archer named Hou Yi who bravely shot down nine of the ten suns that plagued the earth with his bow and arrow. He became an instant hero and as a reward for his service to the earth the Goddess of Western Heaven gave Hou Yi a pill that would give him immortality. Hou Yi accepted the pill, but asked for another to live an immortal life with his beautiful wife, Chang’er. However, the Goddess of Western Heaven did not grant him his request so he returned home with the single pill. He gave this pill to his wife to preserve until he could find another for the both of them.

One day while Hou Yi was out hunting, Chang’er was attacked by one of Hou Yi’s courtiers who found out about the magical pill of immortality. Frightened by this, she instantly swallowed the pill to prevent him from possessing it. Simultaneously, she floated to the sky, landing on the moon to be closest to the earth. Hou Yi returned home to find that his wife was gone. Saddened, Hou Yi called out to his wife and saw a figure on the moon that resembled Chang’er shifting around.

This legend was honored fifteen years ago by a group of immigrant students who found themselves homesick in a foreign land. With the Mid-Autumn Festival approaching, they desired to bring their traditions from China to their new home in Philadelphia. With the idea in mind they collaborated with Asian Americans United to start a Mid-Autumn Festival tradition of their own in the small Chinatown community of Philadelphia. The moon has a significant meaning to the Chinese culture; it embodies “peace, love and family reunification.” Traditionally the Chinese celebrate the Moon Festival which is often called the Mid-Autumn festival in memory of the legend of Hou Yi and Chang’er. It is then where family and friends gaze upon the moon reminiscing about our family, and the world is “united in peace under the same moon”.

The legend goes on to say that Chang’er asked the Jade Hare that lived on the moon to make a pill so she could return to earth to be with her husband and presently the hare is still pounding herbs to make the pill. Hou Yi had built a palace on the sun “representing the male aspect of Yang, in contrast to Chang’er’s new home on the moon which represents the female aspect, Yin.” Each year, on the fifteenth day of the eighth moon, Hou Yi visits his wife on the moon that is why the moon is peculiarly round and bright. 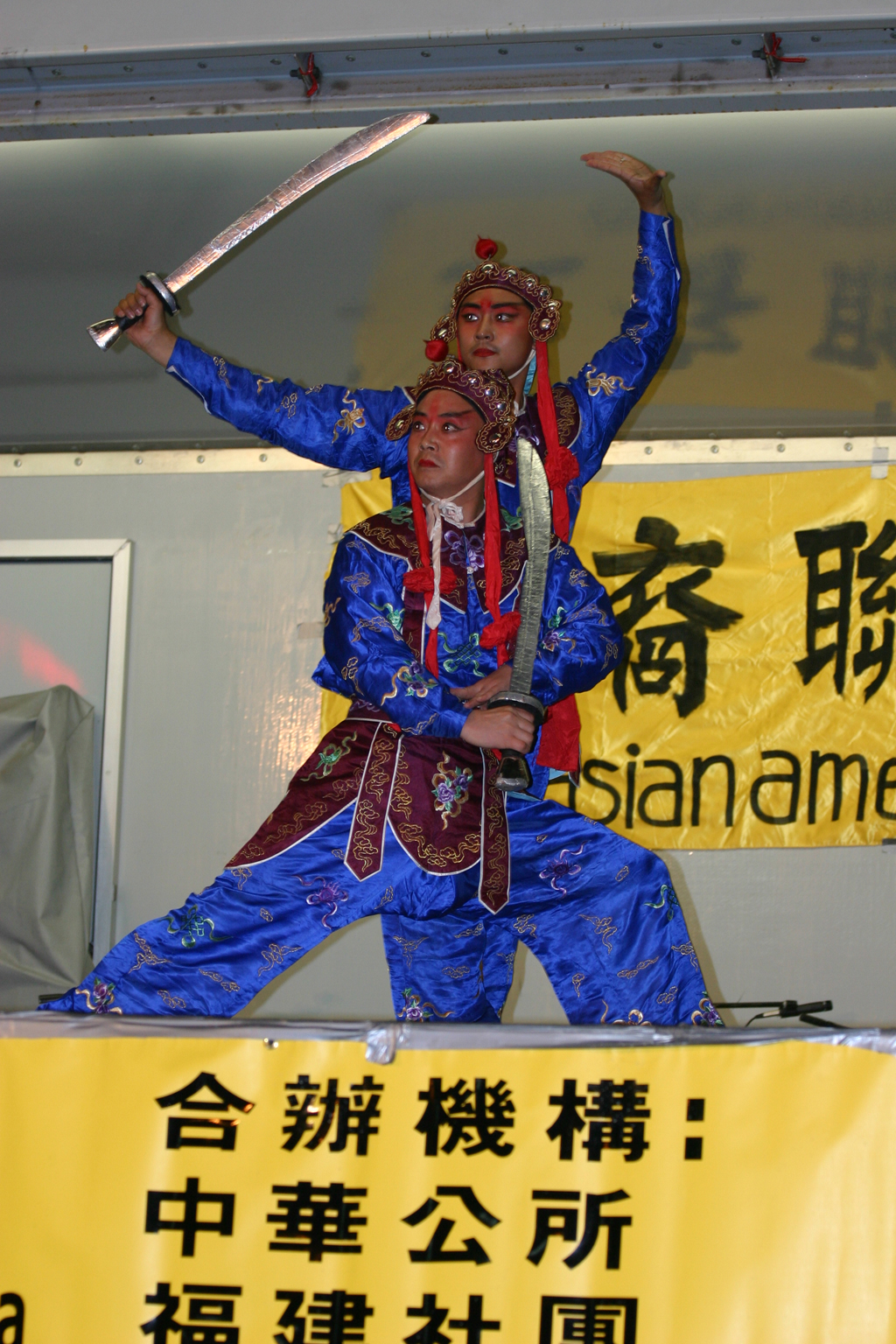 Bret Flaherty and Joan May Cordoba
The Mid-Autumn Festival offers community members a chance to see arts that they seldom get to see in this country. Here the Philadelphia Chinese Opera Society performs a Beijing opera excerpt.

It was then where Andy Zeng and his friend Bai Wei Wu played the roles of Hou Yi and Chang’er in front of hundreds of spectators in the parking lot of Holy Redeemer Church and School, the first Asian American school established in 1941. In a Philadelphia Daily News article Andy explains that he and his friends “designed the festival for the elderly in Chinatown.” When Andy was a little boy in china his grandfather who passed away when he was 8 told him the legendary story and when he came to the United States he wanted to honor his grandfather by bringing the celebrated tradition to Philadelphia’s Chinatown. “When I help old people, it honors my grandfather,” Andy said, through translation. “I want the elderly to be happy.”

The first Mid-Autumn Festival was a small event on September 27, 1996. It included a lantern parade that began at the Friendship Gate to the Holy Redeemer Church. Here the reenactment of the legend took place along with a tai chi demonstration, moon cake eating contest and a traditional gazing at the moon. This event marked the beginning of a new tradition.

In 2001, the Festival extended beyond its usual proximity, with its church parking lot and onto the streets on Chinatown, closing down approximately two city blocks. This move was made by the executive director Ellen Somekawa of Asian Americans United, who, after months of protesting the development of a new Phillies baseball stadium from being built north of Chinatown, won the battle against city officials. The Festival’s new location was ultimately a “political stand for the community while reclaiming their physical and cultural space in the city.” 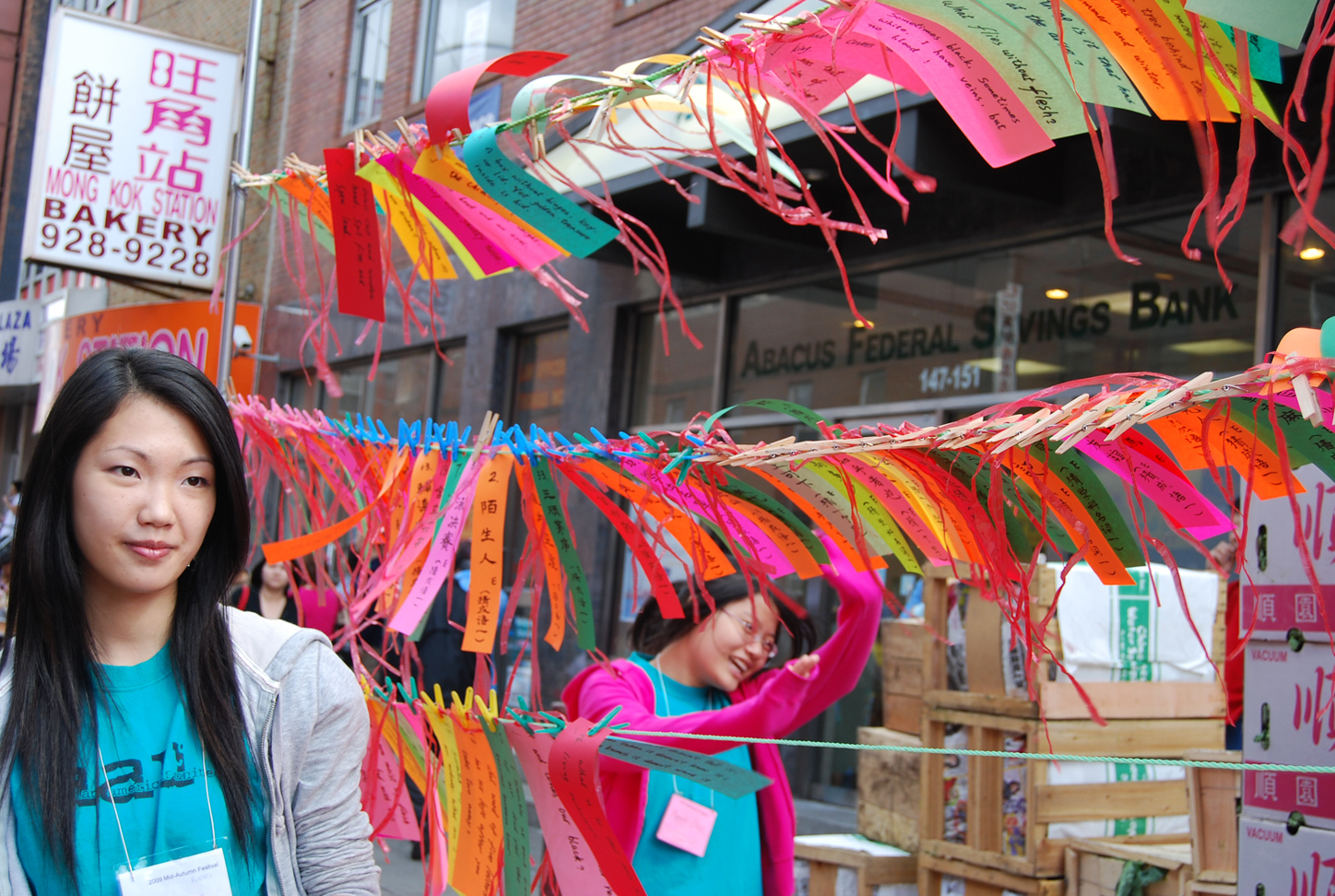 Bret Flaherty and Joan May Cordoba
Lantern Riddles are a traditional activity in China.Festival-goers guess the answers to the riddles on the colored papers and win small prizes.

Growing in popularity since its debut fifteen years ago, today the Festival draws thousands of visitors to the community. Asian Americans United, the main sponsor of the event, has supported the Festival until it has become a significant part of the community, attracting over a hundred student volunteers, visitors from outside the city and extending invitations to other community organizations to participate in the Festival. Past programs included performances by the Mei Mei Dancers of South Jersey, cultural performances by local high school organizations, an appearance by the Monkey King, an iconic Chinese mythical character, and carnival games for children. This festival has become more than a day of celebration, but also one of cultural awareness. In the 12th Annual Mid-Autumn Festival, Mei Lin, 9 and Lily, five members of the Mei Mei Dancers, an all-girl dance group consisting of adopted individuals from China, performed for the festival’s audience. “It’s a thrill for our girls to be dancing in the center of Chinatown,” said Fran McElhill, parent of the performers. “It gives them a perspective on their roots. And they’re performing with other Chinese groups, which gives them legitimacy as Chinese Americans.”

2010’s 15th annual Mid-autumn festival drew in multitudes of individuals to the historical Friendship Gate that hovered over an erected black stage decorated with red lanterns. The streets were crowded with children participating in carnival games that included fishing, horseshoes, and a moon-bounce. “The games are fun and I get to experience different things and see performances on stage,” exclaimed Mary, 10 as she was one of the triumphant winners of a ‘lantern riddle’ game. Along with carnival games for children, the event held several cultural craft tables that focused on oriental themes. Children had the opportunity to create beautiful art from paper, making lanterns, prints, origami and calligraphy, just to name a few. 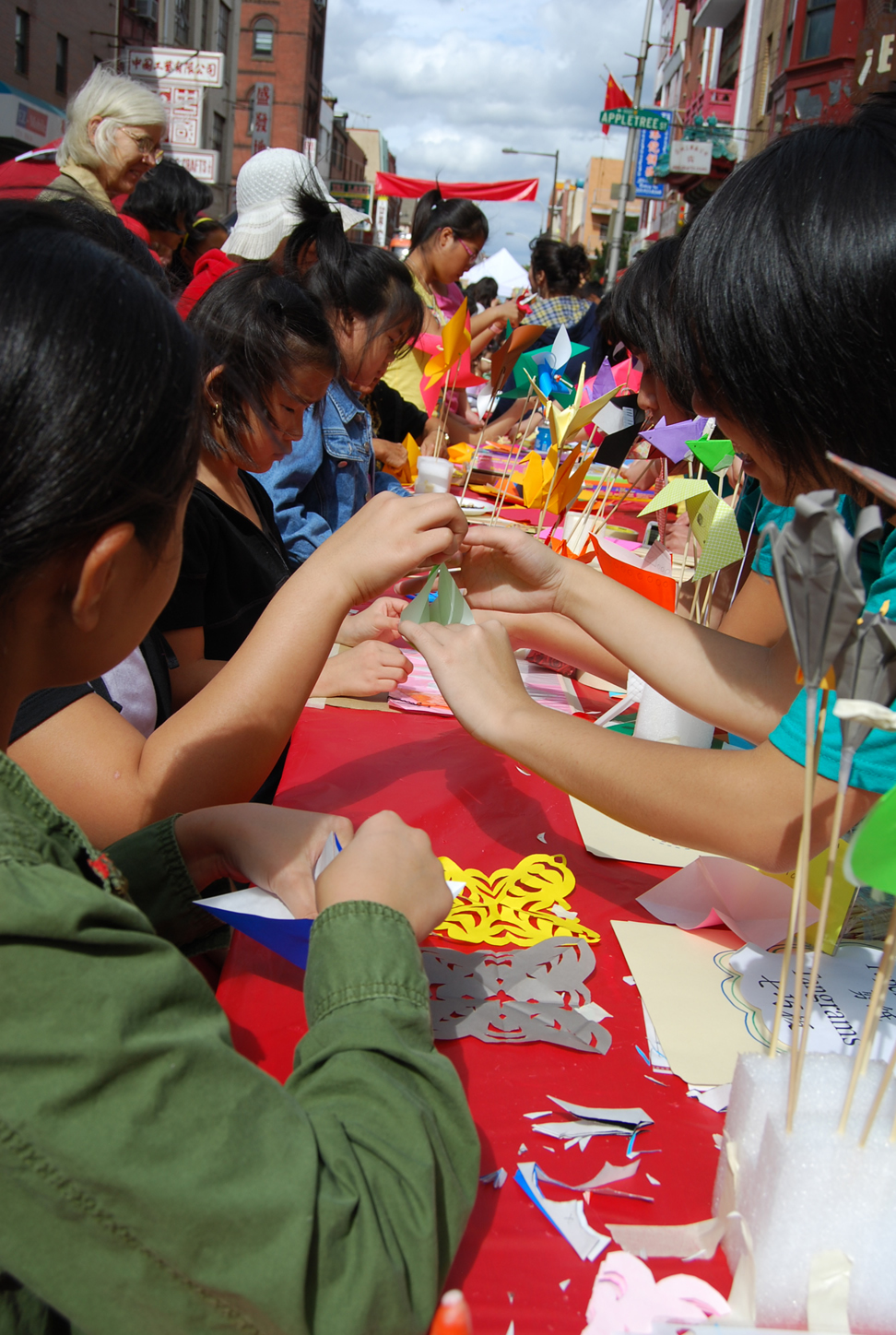 Activities for children are not the only attraction that appeals to participants of the event. Its featured performances are also quite appealing. The community shares its unique culture with the city through dance and song. the Philadelphia Chinese Opera Society performed five pieces during the 2010 celebration. Lisa Vu of LaSalle University enjoyed the cultural performances featured at the event. She was pleased to see a Ribbon Dance performed by a local high school Asian Student Association.“It’s nice to see that the younger generation is still in touch with certain traditions, like dance,” she said. Grace Duong of Temple University is a repeat volunteer for the Festival. She admits that her participation in the festivities is largely due to the goals of the festival: spreading Asian awareness and promoting the community.

The Festival has reached far beyond its initial intentions; it has become a beacon for the Asian community in Philadelphia. The non-profit Asian Americans United utilizes the Festival as a channel of communication to the community, spreading cultural awareness through the various activities and performances displayed throughout the Festival. In addition, the Festival provides a forum for community issues and achievements. The Folk Art- Cultural Treasure Charter School founded in 2005 started its petition to build and fund the school during a Mid-Autumn festival and most recently a ‘peace pledge’ was being promoted throughout the festival, individuals who signed promised to abstain from violence were given a peace sticker.

This one idea of a small community event has escalated to a city-wide celebration, unifying generations, families and friends. The Mid-Autumn festival has become a tradition of its own as it was set out to be.

The Center would like to thank Ellen Somekawa of Asian Americans United for her assistance with this article.