It is a quiet, cool morning in Rothrock State Forest near State College, Centre County, in the fall of 2011. The surrounding trees bear their mosaic of orange, red, and yellow, and John Fegyveresi, an avid ultramarathon runner, is 30 miles deep in the woods. He struggles to maintain his composure as he stops at one of the many aid stations along the race route to refuel with snacks and liquids. He chats briefly with race supporters and fellow runners at the station while he tries his best to keep smiling. Fegyveresi spots another runner whom he has raced in the past. They start to run together despite his pain. Fegyveresi is breaking down, but he knows that he doesn’t have time to worry about his fatigue. He still has 20 miles—nearly a full marathon—left to run. 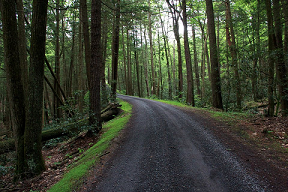 Fegyveresi is running the Tussey Mountainback ultramarathon race. He and over 100 other endurance-craving athletes are hoping to finish the 50-mile course in a personal goal time, or even to win the 50-mile road race national championship outright.

Some may picture an autumn weekend in State College highlighted by a Penn State football game and its associated festivities. The town and area lives and thrives on the revenue that Penn State football brings on a consistent basis. This weekend, however, has a different tone. There is no home game, and the town is quiet and tranquil. What most people in State College do not know is that there is a national championship taking place less than fifteen minutes from downtown State College. Hidden in the woods of Rothrock State Forest at the base of the Tussey Mountain ski resort, the 50-mile road race national championships, hosted by United States Track and Field (USATF), are about to take place. Runners from all over the country, and some from abroad, have gathered to compete for the national 50-mile road race title.

An ultramarathon is defined in the running community as any running race that is longer in distance than a marathon (26.2 miles). Typically, the shortest standard distance for ultramarathons is a 50 kilometer race, or 31.07 miles. Some races are hundreds of miles in length. While some races are standardized by distance, others are measured by a time limit when runners run as far as possible in the time allowed, as Diana Saverin noted in the Pittsburgh Post-Gazette. Some races last 24 hours, while others may continue even longer than that. Many ultrarunners say that they began the sport of ultrarunning because of their love for the scenic trails and the serenity of the outdoors. Others admit that they enjoy the community associated with ultrarunning. Whether you are an elite runner after a win or a beginner trying to make it to the finish, the camaraderie is universal, as John Schumacher observed in the Sacramento Bee.

Keely Henninger, a student at Penn State University, explained her experience as an ultrarunner, “I wasn’t the crazy one. We were all crazy, and we were running for the sake of running.” Henninger ran her first ultramarathon at the 2013 Tussey Mountainback, finishing in second place. “The runners in the race were so encouraging, even happy when I passed them. They were eager to chat, which took the pressure off,” continued Henninger. The Tussey Mountainback beckons to those runners who love the aesthetic element of ultramarathon running. 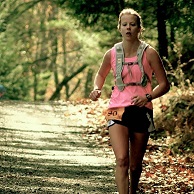 Mike Casper and Steve Bodner founded the Tussey Mountainback race, which began in the fall of 2000. Two avid marathon runners themselves, Casper and Bodner wanted to organize a race that took advantage of the beautiful roads of Rothrock State Forest during a time when the leaves are changing colors. “We were interested in bringing something to the area that would utilize these picturesque roads out here,” said Casper in a 2003 interview with the Centre Daily Times. The 50-mile course winds through the scenic fire roads of the forest, passing through Whipple Dam State Park, Alan Seeger Natural Area, Penn Roosevelt State Park, and around Colyer Lake and the Bear Meadows Natural Area. Despite the beauty of the surrounding landscape, it is coupled with several ascents and descents that make for a challenging course. Casper warned in a 2013 interview with the Centre Daily Times that the race “isn’t for the faint of heart.”

For those who do not wish to take on the challenge of running 50 miles alone, the race provides a relay team option. A relay team can range anywhere from two to eight runners who then manage the race collectively. Some teams have their own history with the race. Casper mentioned in his interview with the Centre Daily Times that one of the most unusual teams is “The Old Men of the Mountains.” Ninety-three-year-old George Etzweiler leads this group of senior runners that has a minimum member age of 65. Most years, they attempt to gather a team that has the highest possible average age of runners. This is one of many teams that compete every year.

George Etzweiler (far left) and The Old Men of the Mountains.

Participants range in age from pre-teens, to college students, to these elderly individuals. These runners epitomize the type of race that Casper had envisioned when he co-founded the race. “We sort of designed this event so you can be a recreational or casual runner, and you can have fun out there,” he notes. Casper also admits that the option for relay teams to tackle the distance in dispersed segments has generated more interest in the race.

In the inaugural year, 91 runners participated in the race. Only one person completed the full length of the 50-mile ultramarathon course, while 15 relay teams combined to trek the distance. In the second year, 36 relay teams and 4 ultramarathoners completed the race. The race has evolved significantly since its beginning years. In 2004, the Tussey Mountainback was named the 50-mile road race championship by United States Track & Field (USATF). In 2013, over 100 relay teams and 152 ultramarathon individuals competed in the Tussey Mountainback.

Despite the growth of the Mountainback race, the sport of ultrarunning has garnered little national publicity. Many do not know that the sport of running exists past the distance of the standard marathon. Henninger competed in the Mountainback as her first ultradistance race. She noted in a personal interview that that the beauty of the course itself should draw hundreds of participants. “It is important to remember that the sport and popularity of ultrarunning is still growing,” Henninger adds. “There aren’t as many crazies out there, so I don’t expect as many runners as a marathon or other typical race.”

Although the race lacks local public acclaim, its mystique lures runners from around the country to the beautiful woods of Rothrock State Forest every year. Whether it be John Fegyveresi, Keely Henninger, George Etzweiler, or 2013 Champion Matt Flaherty, there will be runners at Tussey to take on the National ultramarathon challenge. Someday, you might even find yourself trotting on the gravel roads deep in the forest.