A Weapon of Technology: The Soldering Gun 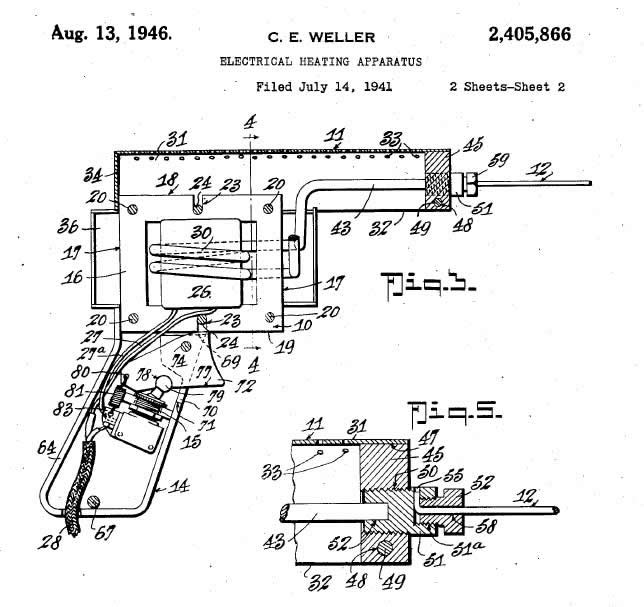 Some men like to wait around for things to happen. Carl E. Weller was not one of these men. Hailing from Easton and working as a radio repairman, Carl Weller had to use a soldering iron as a part of his everyday routine, but he felt that the soldering iron did not heat up fast enough. In 1941, using his knowledge of electronics, he created a new way to heat the tip of the soldering iron, thus inventing the soldering gun.

The soldering gun was such an important invention that it led Hubert Luckett of Popular Science magazine to say that “the instant-heat soldering gun is one of the rarities—a hand tool that was truly a new and needed invention.”

A soldering gun is used much in the same way that a soldering iron is used, mainly to solder things together. Soldering is a process in which two or more metals are joined together by melting a solder on them. Solder is usually tin- or lead-based so that it melts at a lower temperature than the two metals being joined together. A soldering iron is a tool that heats up when electrical current runs through it. It looks a lot like a screwdriver, but when the tip is hot, the heat can be transferred to metals by touching them together.

Welding is similar to soldering because involves joining two or more metals. The difference between the two processes lies in the fact that in welding, the two base metals are melted and joined together. With soldering, only the solder itself is melted. Welding is also generally done at much higher temperatures than soldering. Soldering is mostly used when dealing with electronics and wiring, when plumbers put together copper pipes, or when autos need repair.

Like many men in his trade of radio repair, Weller was generally off put by the fact that he would need to leave the soldering iron in his workshop on all day, since it took too long to heat up. This also was a major problem when he was on house calls doing a job that required soldering. Too much time was wasted waiting for his iron to heat up. Carl Weller managed to succeed where his predecessors failed, however, by developing a quick heating soldering tool, the soldering gun. A colleague, Al Kittinger, said “[Weller] was an American pioneer. No job was too small for him; there was nothing he couldn’t solve.” Weller seemed almost destined to make the soldering gun.

The key features of the soldering gun that make it stand out from the soldering iron, are its use of a transformer, direct heating with electrical current, and a trigger. Carl Weller loved guns, which may explain his decision to include a trigger and to shape the device like a gun. Part of the reason the soldering iron took so long to heat up was that the wires in a soldering iron needed to heat up first, before the energy could even reach the tip of the iron. This resulted in wasted energy and wasted time.

The addition of the transformer allows the soldering gun to heat up much faster than a normal soldering iron. A transformer is a device that allows alternating current (AC) voltage in a circuit to increase or decrease. Voltage and current have an inverse relationship; if voltage increases, current decreases, and vice versa. The transformer that Carl Weller featured in his soldering gun rapidly drops the voltage, which created a sharp rise in the current going through the circuit. When current moves through something with resistive properties, the material that is resistive heats up. When a lot of current goes through it, it heats up really fast. 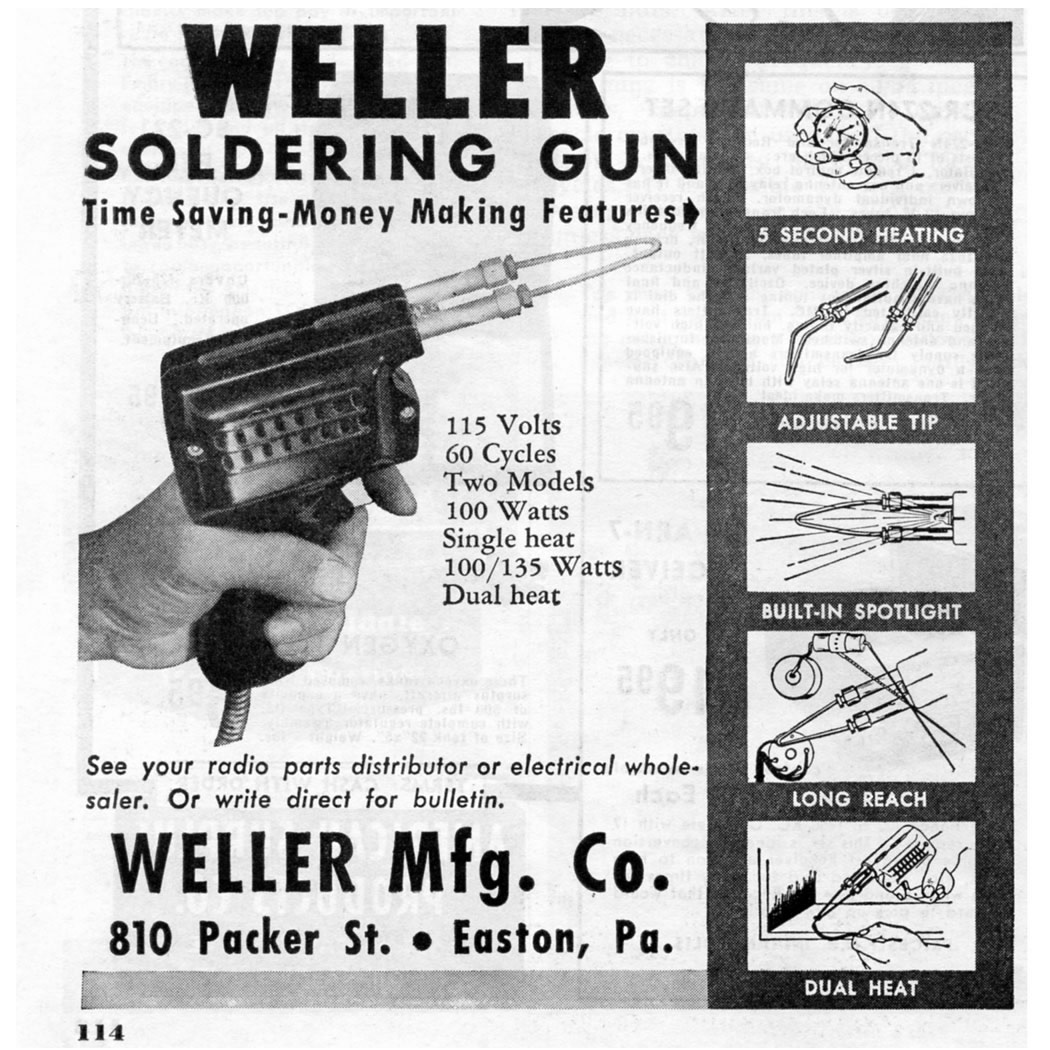 Because he saw great potential in his new product, Weller tried to sell his idea to large manufacturing companies, but they shunned his idea, considering it impractical. Weller, not one to give up easily, then built 274 soldering guns by hand in his basement, using up all of his resources. Weller sold the guns to other radio repair shops. In 1945, thanks to great feedback from his peers, Weller started a manufacturing company, not so cleverly named, The Weller Manufacturing Company, to produce more. The company was an overnight success, and it eventually became a multi-million dollar business after branching out to the sales of other tools along with the soldering gun. In 1970, Weller Manufacturing Co. was sold to Cooper Tools. Cooper has decided to keep the brand name and make it a subsidiary, since the Weller name has always been associated with high quality tools.

After some years, Weller improved on his soldering gun by making it lighter weight and using easily interchangeable tips to allow for multiple temperature levels to be used for whatever soldering challenges might be run into. The tips are a key factor in the design of the soldering gun, since the tip generally takes up a much smaller area than the rest of the circuit. The smaller the cross sectional area of a metal, the higher resistance it has. This is very important, since it allows most of the heat energy to go to the tip and not to the rest of the tool.

Recently, soldering irons have matched the soldering gun in terms of how fast they heat up. However, the soldering iron is still at a disadvantage to the gun when power consumption is a major factor in the soldering process for certain tasks. The fact that the soldering gun so easily turns on and off due to its trigger system, will ensure that this tool won’t be replaced any time soon. The only way it could be replaced in this regard is if a smart soldering tool is invented that somehow knows exactly when it should turn on and off, but that may well prove too complex to develop for most common applications.

The soldering game was changed completely by the invention of the soldering gun. It created a more competitive market and more importantly it allowed the users to have a wider range of tools to complete a wider variety of tasks. And all thanks is due to a small time radio repairman from Easton, PA.