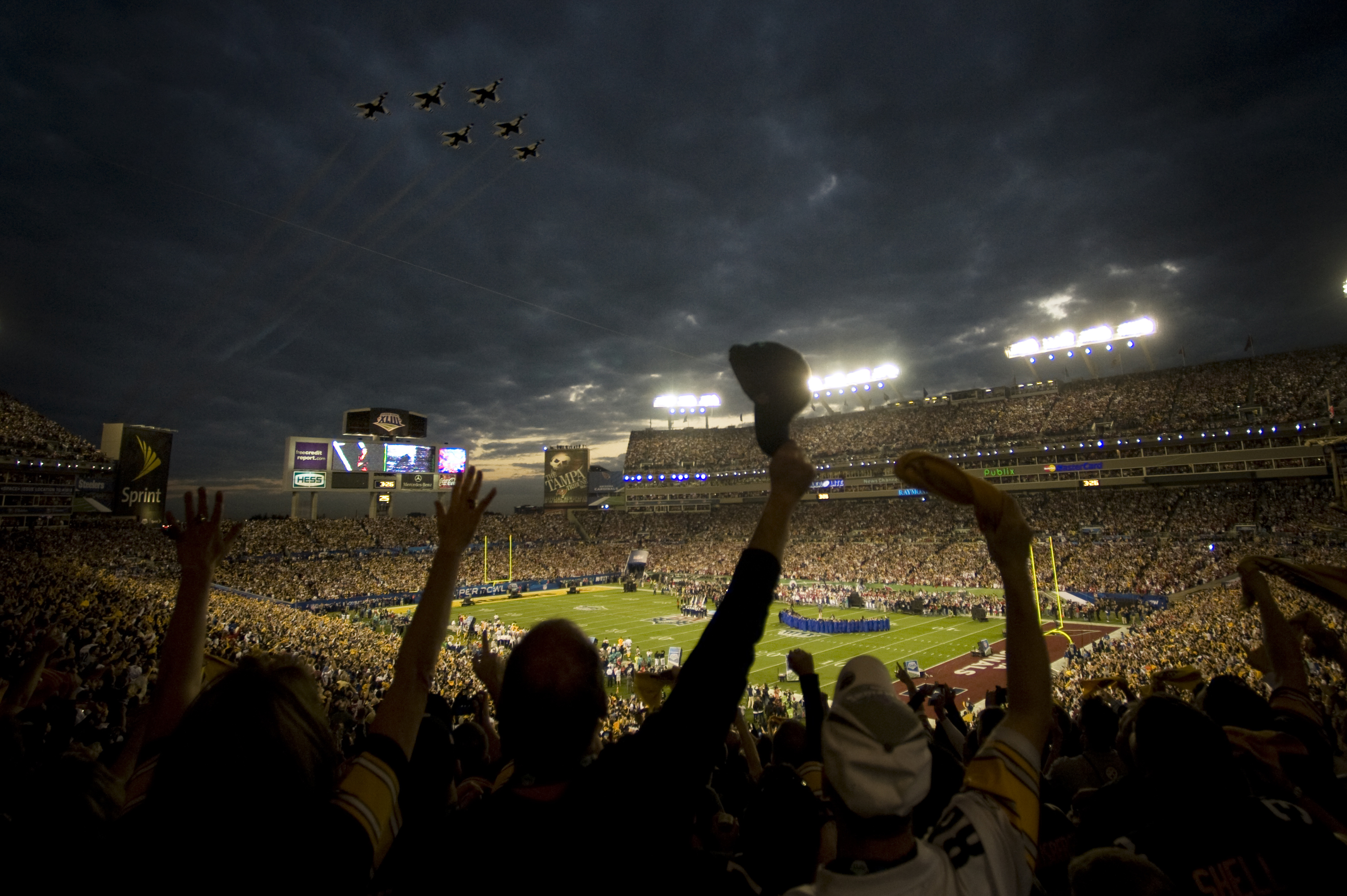 Staff Sgt. Kristi Machado - U.S. Air Force
The nighttime kickoff of Super Bowl XLIII is hardly amazing today. An 1892 game in Mansfield, however, was the very first played under the lights.

On September 28, 1992, the Kansas City Chiefs defeated the Los Angeles Raiders 27-7 on Monday Night Football. Even though this particular game had no lasting impact on the sport of football, thousands of fans watched it game in person, while millions more viewed America’s most popular sport from home on their television sets. Two decades following its inception, Monday Night Football had become a staple of American television and was the weekly culmination for the National Football League’s offerings to its fans. This show brings together America’s greatest passions – football, primetime entertainment, and innovation. Surprisingly, a century before this game to the day, a much smaller audience in a small town in Pennsylvania also thought football might be better viewed—under the lights.

One hundred years before that September Monday Night Football game, another football game was played on a Wednesday night, and became, according to many sources, the first night game in American football history. Mansfield State Normal and Wyoming Seminary played at night, using the innovative new technology of electric lights. The game was played in Mansfield on September 28, 1892, just 13 years after Thomas Edison had invented the light bulb.

Back in the 1890s, the Great Mansfield Fair was held in Tioga County. The Centennial Night of Football Souvenir Program described the fair as the region’s largest annual social occasion that showcased unique events and exhibits. The 1892 fair would be unique compared to past fairs for one main reason: for the first time the electric light would be seen in the northern region of Pennsylvania. Edison’s recently founded company, General Electric, announced before the fair that it would be bringing the Thomson-Huston machine to Mansfield as an exhibit of electric lights. 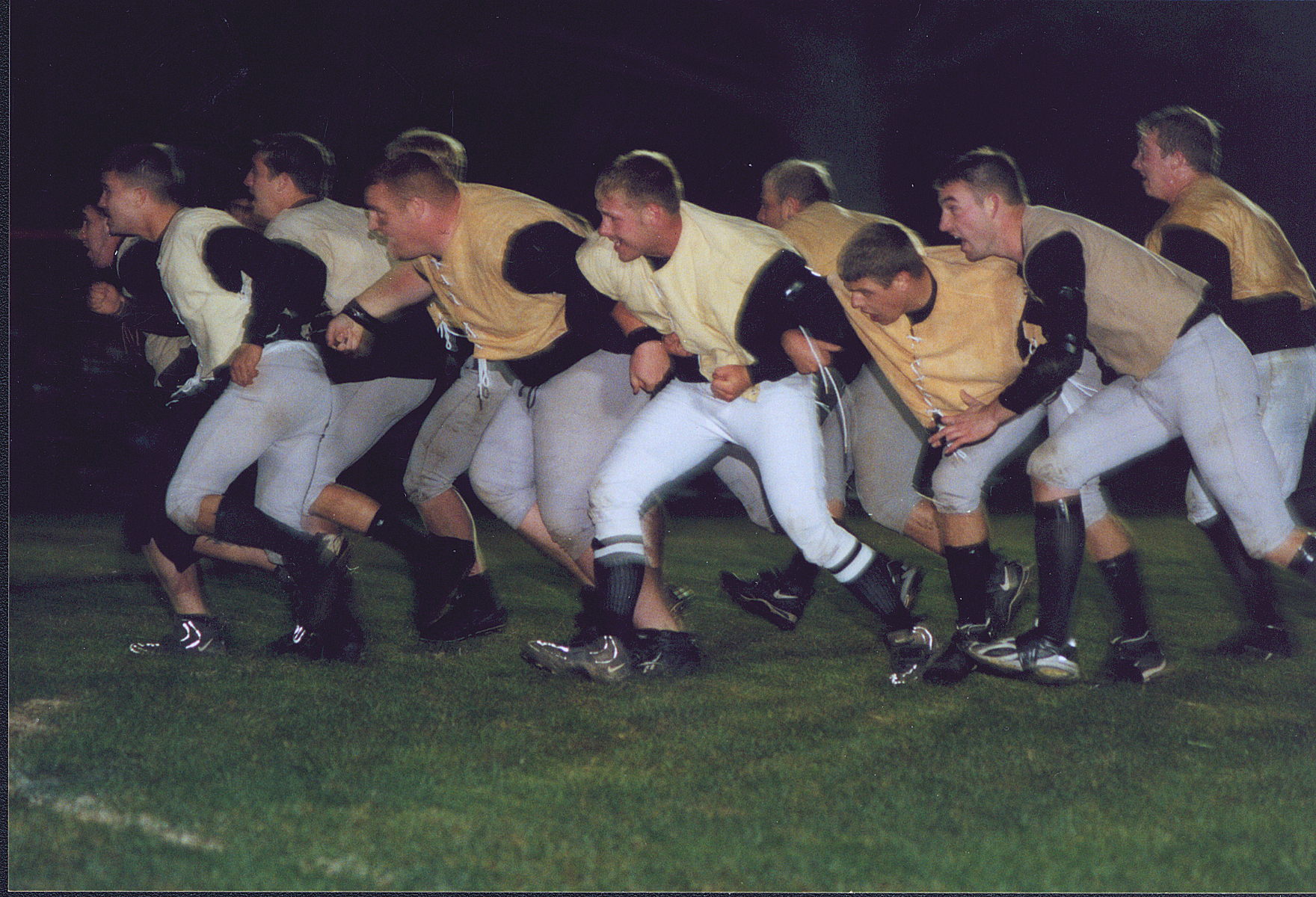 Mansfield University of Pennsylvania
Re-enactors of the first night football game rush in the now-banned wedge formation. Legal in 1892, the wedge with its linked arms was prohibited after too many players were injured in its wake.

The Thomson-Huston machine had a 30-light capacity. Its generator contained miles of insulated copper wire, and the machine weighed a whopping 4300 pounds. The outdoor lighting was the main attraction for the fair in 1892, and Mansfield’s football manager, Professor S. E. Sprole, knew it would draw record crowds to Mansfield. He decided that it was a perfect occasion to show off his team and the new sport of football.

At this time in history, football was still in its infancy, much like the electric light. It had not yet become a popular national sport and was really just beginning to gain notoriety. In 1891, Mansfield State Normal had created its first football team and. Professor Sprole, along with his team, decided they could use the buzz around the electric lights in Mansfield to show football to the masses by playing a game under the new lights.

The game began during the twilight hours at 6:45 pm to take advantage of the small amount of natural light left in the sky. As one could imagine, the lighting was very poor for the game, and some lights were even posted on a pole in the middle of the playing field. The field was also not up to modern standards. According to the Mansfield Centennial Game Souvenir Program, the field “was full of holes, butternuts, pebbles, and ‘animal residue.’” There were also foggy conditions that night, making the game even more dangerous for the players. 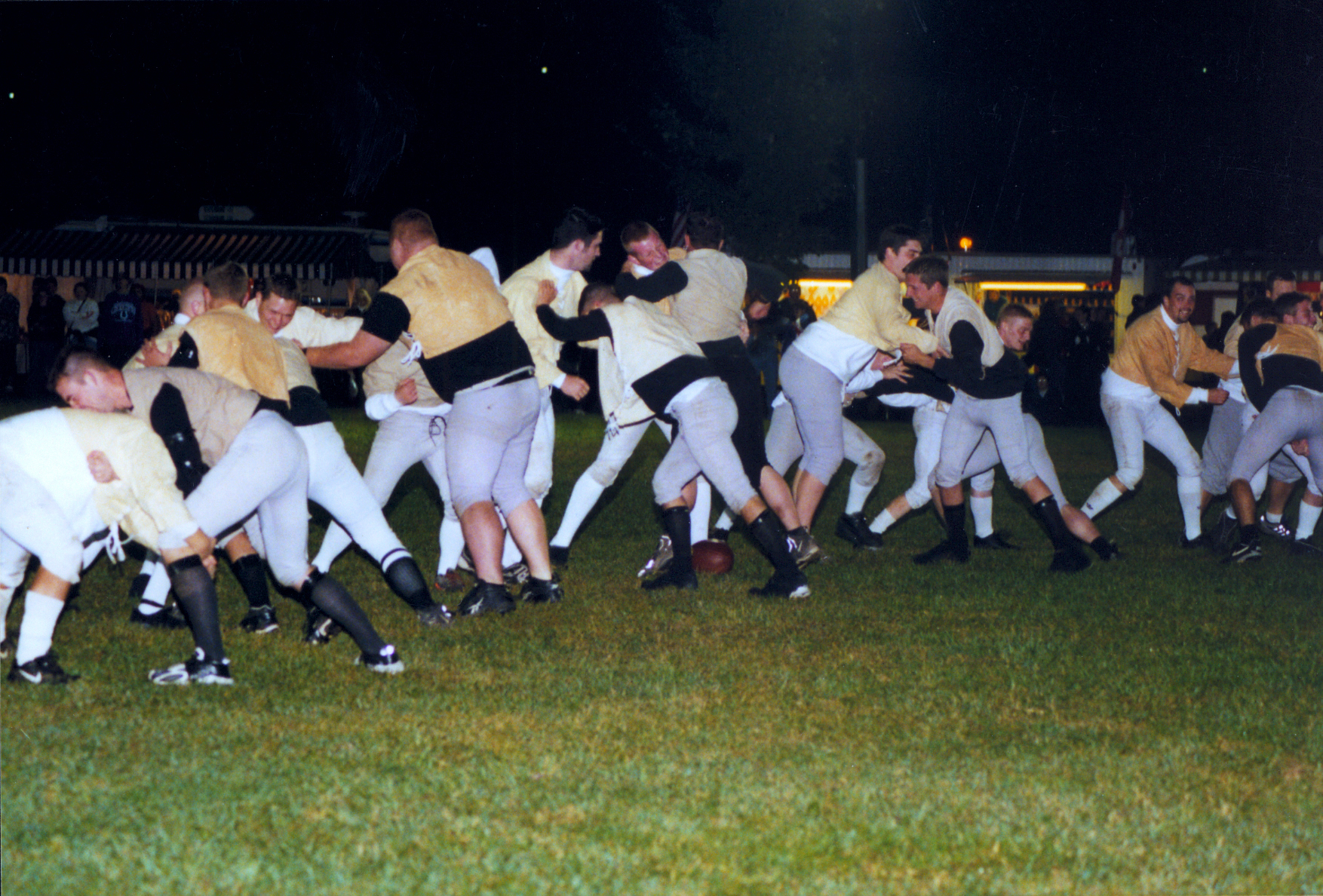 Mansfield University of Pennsylvania
Battles along the line of scrimmage could be particularly vicious in the days before the first legal forward pass in American football in 1906.

The equipment used by the players was just as poor as the playing conditions. There was essentially no protective equipment used during this time period, except for some small padding around the knees. This was 20 years before the invention of the football helmet, so some players rather ingeniously actually grew their hair out as a natural form of protection. As far as uniforms for the game, Wyoming Seminary wore white uniforms in hopes of reflecting some light, while Mansfield wore black uniforms which made most players nearly impossible to see given the lighting conditions.

Mansfield started the game with the ball and had a solid opening drive, but failed to score. After this, neither team could do much offensively, mostly due to the poor visibility. After only a few drives from each team, the referee decided it was “inconvenient to continue” the game. Even by the standards of the day, the game was clearly too dangerous to continue playing. This historic event ended in a very unexciting 0-0 tie.

The game was commemorated afterward by a fireworks display at the fair. Spectators had just witnessed the first ever night football game, although no one in attendance was aware of this.  Shortly after the game, Wyoming Seminary asked for a rematch, but it was not until a hundred years later that this challenge was finally accepted. 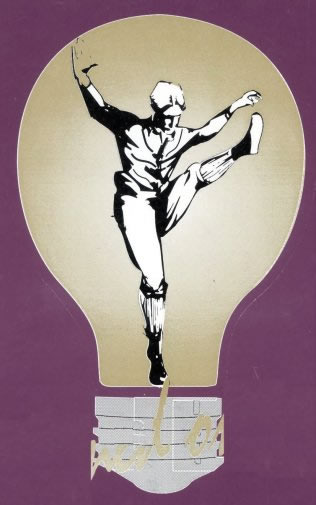 Mansfield University of Pennsylvania
The nighttime kickoff of Super Bowl XLIII is hardly amazing today. An 1892 game in Mansfield, however, was the very first played under the lights.

A century later, the town of Mansfield decided to commemorate the event by holding their “Fabulous 1890s Weekend,” which would feature a re-enactment of the First Night Football Game. The Mansfield Chamber of Commerce decided this would be a great event and designed the fair using an 1890’s theme. According to the fair co-chair Dennis Miller, other events at the Fabulous 1890s weekend included “living history demonstrations, hot air balloon rides, music, entertainment and the motorless parade.” The town of Mansfield and Mansfield University support this now annual event. The town has become so involved in this event that even local businesses have renovated their buildings with an 1890s theme in mind.

The reenactment of the game was designed to be as similar as possible to the original game. Vintage uniforms and playing equipment were outfitted to participants and the game was even played with a light pole right in the middle of the playing field. Members of Alpha Chi Rho fraternity of Mansfield University put together the inaugural reenactment game, but the event has expanded every year since.  Along with the reenactment, Wyoming Seminary’s football team played a club team from Mansfield University that evening in a real game in an answer to the century old rematch request.

Although the great majority of football historians, along with the Football Hall of Fame, agree that Mansfield was the site of the first night football game, there is one other game, which occurred a decade later, that some claim was the first. In Elmira, New York a professional game was played between the Philadelphia Athletics and the Kanaweola Athletic Club, as Diane Janikowski recounts.  This game claims to be the real first night football game since the Mansfield game was called early and never completed due to poor lighting. While Elmira is the first night game to be finished, most historians and football organizations, including the Hall of Fame, continue to recognize Mansfield as the original site of night football in America.

Night football is arguably the greatest advancement the sport has ever seen. Although many games are still played during the day across the country every fall weekend, there is something special about night games. The best part of the week for any high school student is going to the football game on Friday night. A blockbuster film and a network television series have been centered on “Friday Night Lights” and high school football. College football teams play their most important games of the season at night and save their average games for the afternoon kickoffs. The NFL’s premiere program has been Monday Night Football for over four decades now, not to mention the success of primetime football on Sunday nights. The largest television event of the year is the Super Bowl, a football game played at night. Football can be played at any time of day, but the sport really shines when it is in the spotlight at night.

Players and coaches for both Mansfield and Wyoming Seminary were visionaries. They knew they had a sport which could be in the mainstream with some promotion. They saw that they could use lights to, literally and figuratively, put a spotlight on their new sport. Football and lights have had an inseparable relationship in the past 120 years. We can thank a few players and coaches from a small town in Pennsylvania for what football has become today.