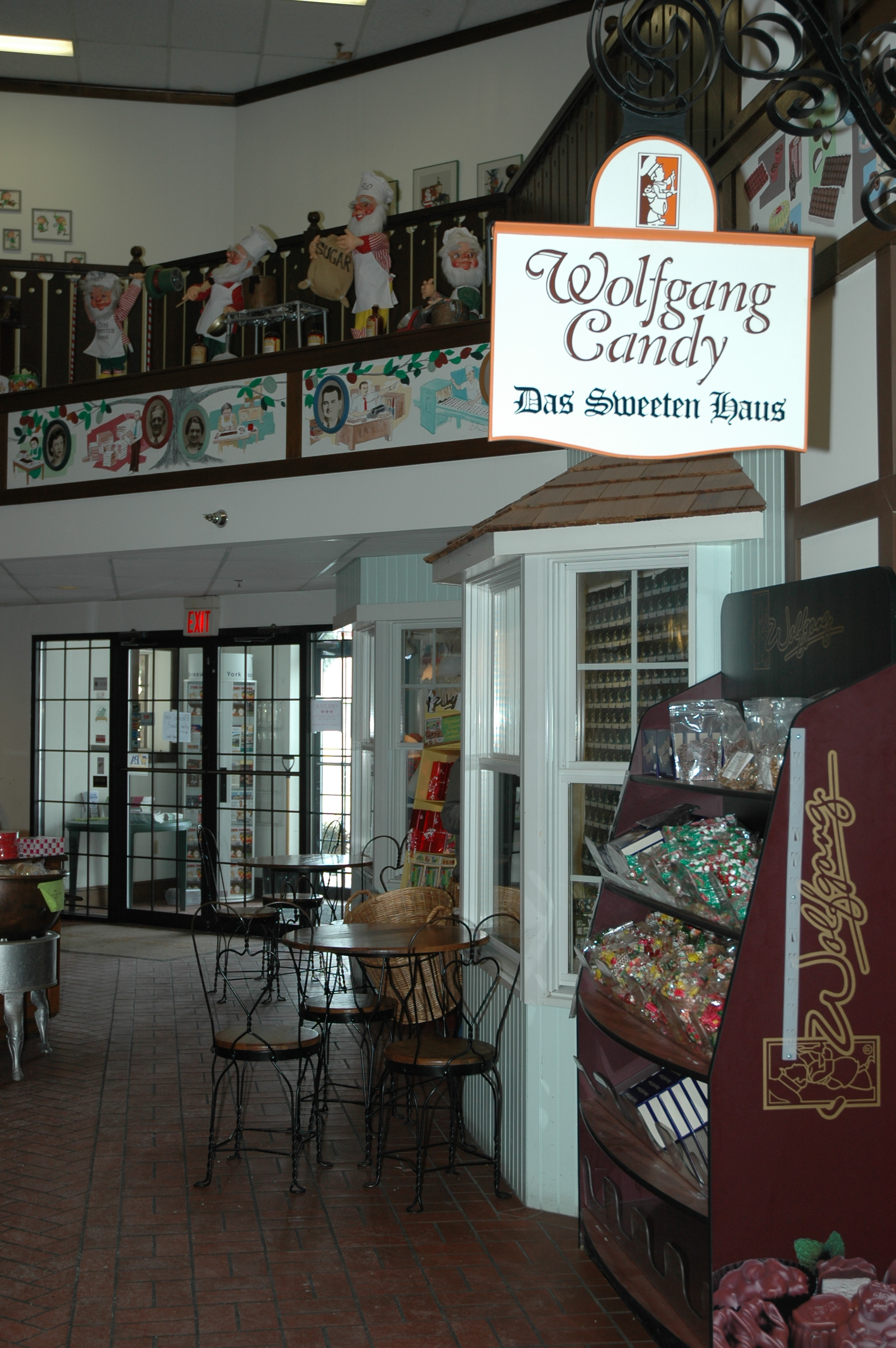 Kelsey Pinker
Wolfgang Candy's Das Sweeten Haus welcomes those with a taste for nostalgia and for good candy.

Peanut butter puffs, coconut creams, pecan turtles…so much to be seen, smelled, and tasted! Nestled in the small town of York, sits the four generations old Wolfgang Candy Company. Though many may not recognize the name, Wolfgang’s candies are familiar to almost anyone who has sold candy for a fundraiser. Food Network’s own Top 5 named Wolfgang’s one of tastiest tours in the country. This chocolate factory is a step back in time to a world of sweet indulgence.

Wolfgang Candy is a gem in the state of Pennsylvania. The factory has hardly changed from the time it opened in 1921. Boxes of chocolates are still packaged by hand and machines have not replaced many other tasks. The company features a walking tour in which guests are able to enter the plant and see the candy-making process first-hand. Once the tour is complete, groups are escorted to the Das Sweeten Haus, the museum and candy shop. Here visitors learn about the history of the company and see how the company has evolved. The candy shop features an old fashioned soda fountain where chocolates, ice cream, and floats are served to guests, as well as family photos and other marks of the company’s development. 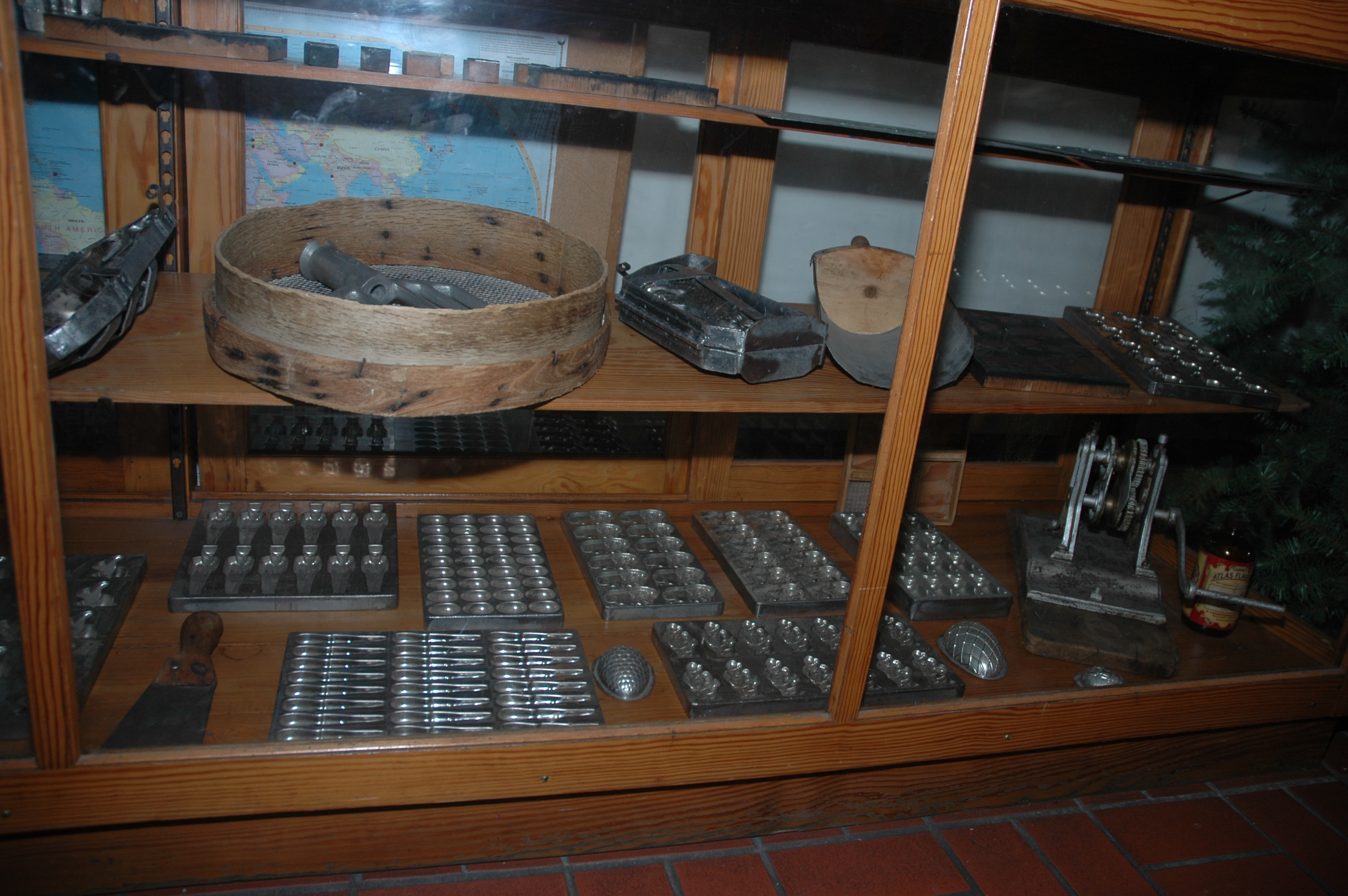 Kelsey Pinker
Vintage molds and other candy-making equipment are on display in Das Sweeten Haus.

Helping the local community as a major partner in fundraising, Wolfgang Candy stands apart from most companies. Sharon Hernes Sliverman, author of Pennsylvania Snacks: A Guide to Food Factory Tours, reports that a whopping 97% of company’s business is created from fund-raising efforts. Silverman also states that over 2,000 organizations sell Wolfgang’s candy in 26 states. From Michigan to North Carolina and from Pennsylvania to Maine, Wolfgang facilitates fundraisers for organizations ranging from small clubs to large corporations. The company allows up to 50% of the revenue produced from goods sold to benefit the organizations. Acting as a fair, profitable fundraising partner, the company affects not only the members of these organizations but also the local communities. Currently, many elementary, middle, and high schools rely on selling Wolfgang’s products as their main fundraiser to elevate their academic learning environment.

Wolfgang not only makes its own chocolates, but it also makes customized candies for organizations. The company offers a wide variety of options for companies to make treats exclusive to themselves including the ingredients used and the type of packaging. Wolfgang also supports local causes to help raise funds. The company’s website features charitable baskets of sweets that customers can purchase to benefit organizations, such as the local food bank. In 2004, Wolfgang made a special chocolate bar called the MOOSE bar for former pitcher of the New York Yankees Mike Mussina. The proceeds from these candy bars then went to the Mike Mussina Foundation, which benefits local children’s charities in his hometown Montoursville, Lycoming County. Since Wolfgang is privately owned, they are able to produce what they want when they want, another characteristic that makes them unique.

Today Wolfgang Candy has expanded from the original Das Sweeten Haus to three neighboring buildings. Aside from growing into a larger space, however, not much has changed. The same recipes used when the factory was opened in 1921 are still used today. However, both temperature and humidity regulating equipment are state-of-the-art to aid in the creation of optimal chocolates. The company prides itself on the quality of their product and leaves nothing to chance. 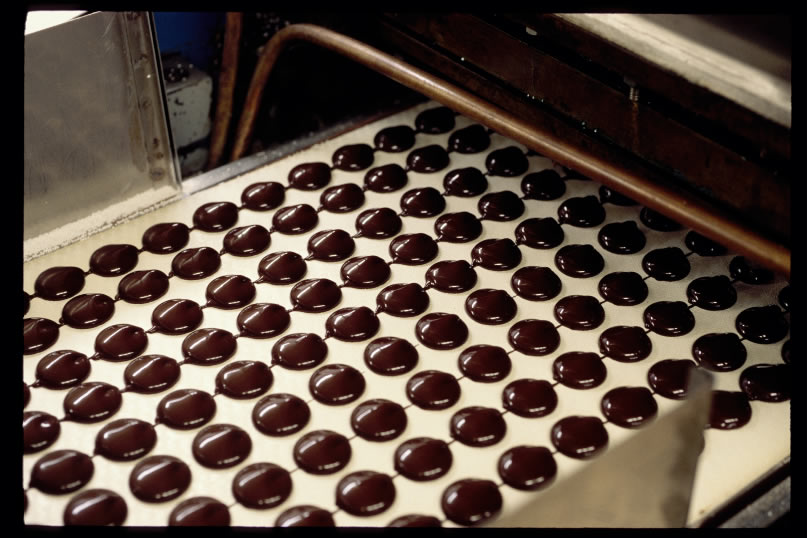 York County Convention and Visitors Bureau / VisitPA.com
Enrobers drench candies in chocolate and bring them to workers on a line for packaging.

Wolfgang Candy opens its doors to tourists four days a week. This tour has also been filmed by the Pennsylvania Cable Network. The PCN video tour, narrated by Wolfgang’s own Rob Wolfgang, featured peanut butter puffs, coconut creams, milk chocolate caramels, and mint creams. While leading the tour, Wolfgang showed each candy in a different stage of production. Starting to make peanut butter puffs, candy makers demonstrated initial steps. Molten sugar is seen boiling in a copper kettle until a precise temperature is reached. Then the liquid is poured onto a cooling table and manipulated by hand until it is the proper consistency. Leaving this room Wolfgang guides visitors to see how fillings are made. The coconut cream filling is mixed, cooled, and cut into the precise shape. Nearby liquid caramel is placed into cornstarch molds prior to chocolate coating and mint creams are first coated on the bottom first to ensure no cracking. The enrobers, used to encase the candies in chocolate, have a constant waterfall pouring on to the treats making this section of the tour mouthwatering.

The tour then moved to the packaging stage where it felt like the “Job Switching” episode of I Love Lucy, in which the hapless Lucy works in the local candy factory filling boxes. Staff members worked alongside each other removing the chocolates from a conveyor belt and placing them into boxes. The boxes are then weighed before being wrapped and placed in the trademark Wolfgang sleeve. Unlike Lucy, however, the workers do not scramble to keep up with the belt of candies by eating those they cannot put in boxes! 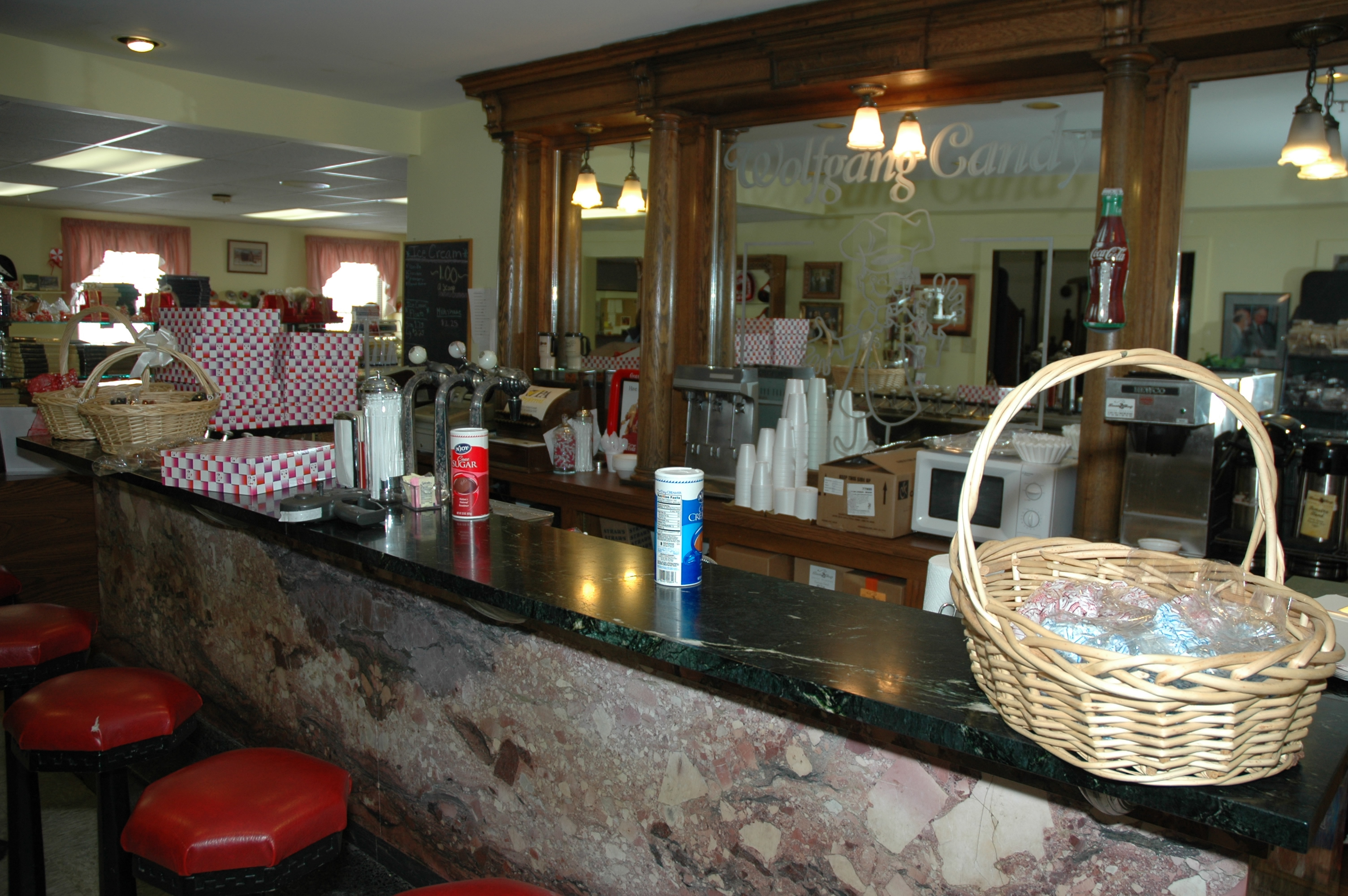 Kelsey Pinker
Visitors can get an old-fashioned soda and many other products inside Das Sweeten Haus.

While the equipment is very modern, the atmosphere in Das Sweeten Haus glories in the company’s past. Its museum displays receipts the company has collected, dating back to the early 1930s and 40s. Various displays showcase vintage equipment, candy tins throughout the years, and - most impressive - a 1926 Ford Model T that features Wolfgang advertisements on its sides. The walls of the museum contain panels that depict the company’s history and the Wolfgang family tree beneath a quartet of puppet candy makers. The candy shop hearkens back to older days, featuring an old-fashioned soda fountain that is still working, making floats for visitors. Here customers can satisfy a sweet tooth and purchase the candy that Wolfgang makes on a daily basis. One perk of visiting the Das Sweeten Haus is the ability to try the candies sold in the fundraising catalogs, as well as buy the company’s “seconds,” or sweets that didn’t quite pass the “aesthetically pleasing quality” test, at a discounted price.

The Wolfgang Candy Company is known for a spectacular product produced with love.  Customers will be sinking their teeth into their childhood when eating these old-fashioned hand crafted candies. The next time a child comes knocking on the door to sell Wolfgang Candy remember, not only will the revenue help their cause but taste buds will also benefit.