Whooo, Whoooo! All Aboard to Steamtown! 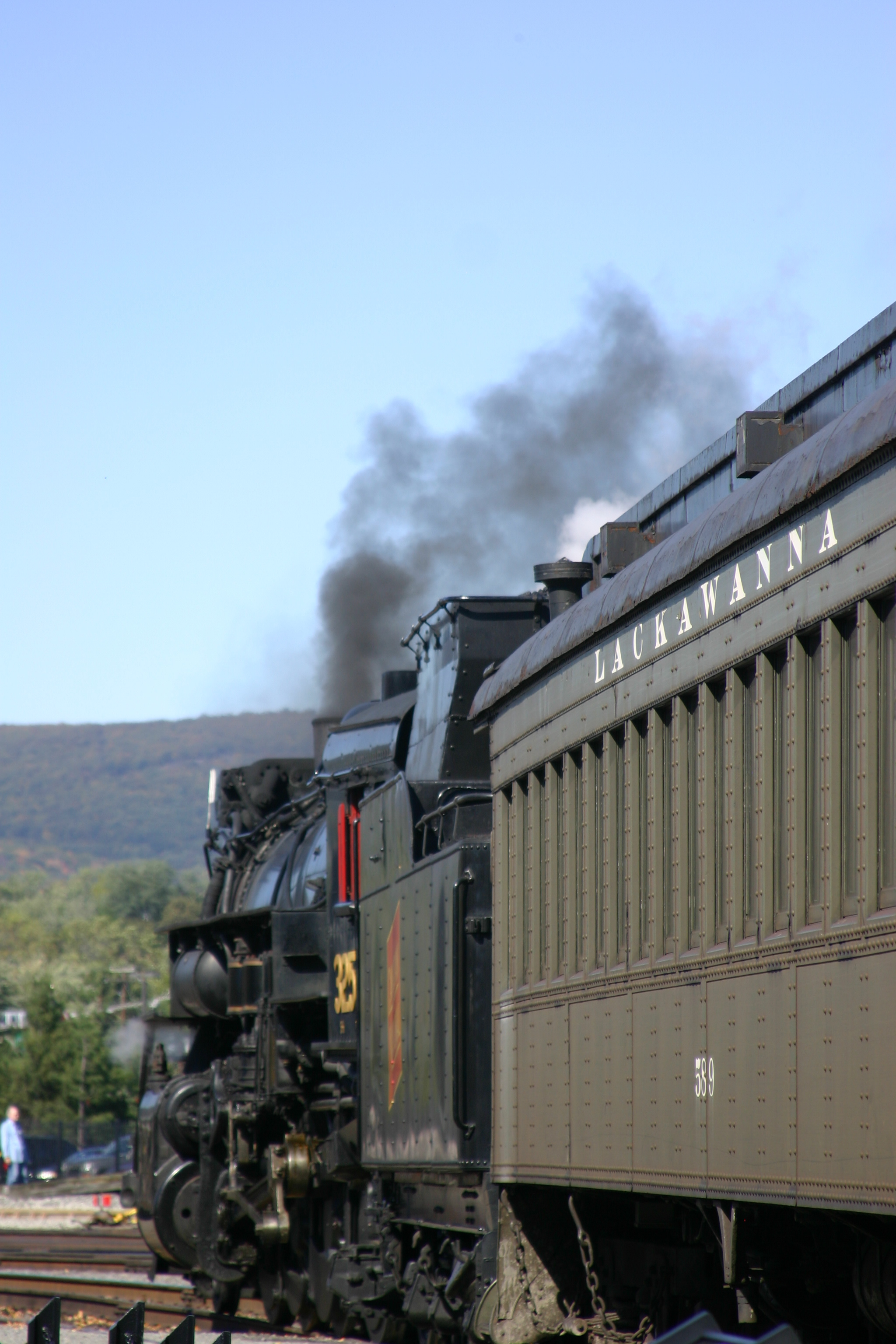 Catherine Caterson
The Short Limited excursion train returns to Steamtown and prepares to enter the turntable.

All aboard! Step into the Scranton Limited and take a step back in time. Marvel at the exquisite wood paneling, and remember, spitting is prohibited. Listen for the “Whooo, Whoooo!” of the engineer’s whistle. Sit back, relax, and feel the raw power of steam locomotion as two whistles signal the beginning of your journey to a bygone era.

Steamtown National Historic Site is one of only a few sites in the country to feature steam locomotion and its history as a living museum. It is one of the largest collections of its kind, with the Union Pacific “Big Boy” locomotive, weighing in at 1.2 million pounds, as its centerpiece. If you are looking for short and long excursions throughout northeastern Pennsylvania that are fun for the whole family, look no further than Scranton, Lackawanna County.

Steamtown began in 1966 as Steamtown USA in Bellows Falls, Vermont. Millionaire F. Nelson Blount was an avid collector of railroad cars and steam locomotives, having spent his childhood “watching and riding the steam trains of the New Haven Railroad and dream[ing] of the day he would own and operate steam locomotives.” He sensed the era of steam locomotion was ending, and made his first purchase after earning a small fortune in the seafood industry. Steamtown was the culmination of his dream for a place where children and families could share his love of rail transportation, and it was billed as the “world’s largest operating rail museum.”

Mr. Blount’s collection was the largest private collection in the U.S., consisting of more than 100 pieces of rolling stock from both the United States and Canada. It included 35 locomotives and 30 pieces of additional equipment and rail cars. Jim Boyd, the editor of Railfan magazine, states that this collection contains pieces that are “…no longer obtainable anywhere…which any museum would give a right arm for.” Excursions were offered, attendance was rising, and plans for expansion were made. Passengers could even partake in a two-hour trip while enjoying the comfort of dining in President Franklin D. Roosevelt’s own dining car “The Mountaineer.” 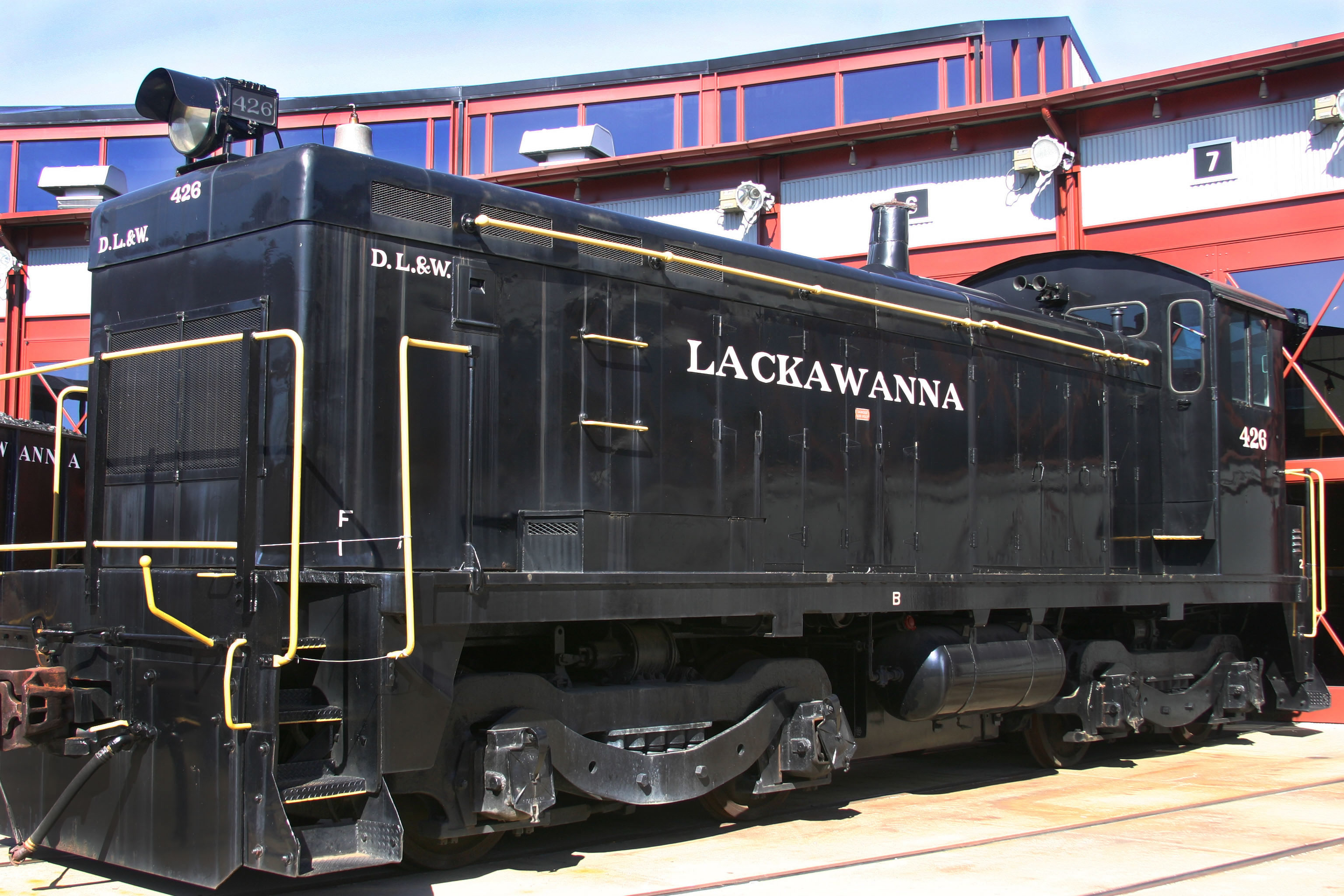 Like any museum, Steamtown USA faced several challenges. Laws in Vermont banned billboards on interstate highways, which limited Steamtown’s advertising potential. It was not allowed to even put a small sign on the near-by highway directing visitors to the park; as a result, many visitors passed by Steamtown without knowing it was there. Tragedy struck Steamtown in 1967 when Blount perished in a plane crash. After Blount’s death, Steamtown USA fell on hard times. Attendance plunged to 17,000 in 1981 from a previous high of 65,000. Many of the pieces were aging rapidly, as there was no outdoor shelter to protect the trains. Several of the pieces were sold to keep Steamtown afloat. In 1984, the Foundation faced bankruptcy and began looking for a new home.

Several sites were considered for reestablishing Steamtown USA. At the time, 20 million people lived within a 100-mile radius of Scranton, and it could be accessed by the Northeast Extension of the Pennsylvania Turnpike, as well as Interstates 80, 81, and 380. Both New York City and Philadelphia lay only about two hours away. This prompted estimates of two-hundred thousand to four-hundred thousand visitors in the first year of operations. These estimates greatly exceeded the best year of attendance in Vermont, which peaked at about 65,000. The nearby Lackawanna Station was transformed into a 150-room luxury hotel, the Radisson, in anticipation for Steamtown USA’s move to Scranton, which would boost the economy and revitalize downtown. 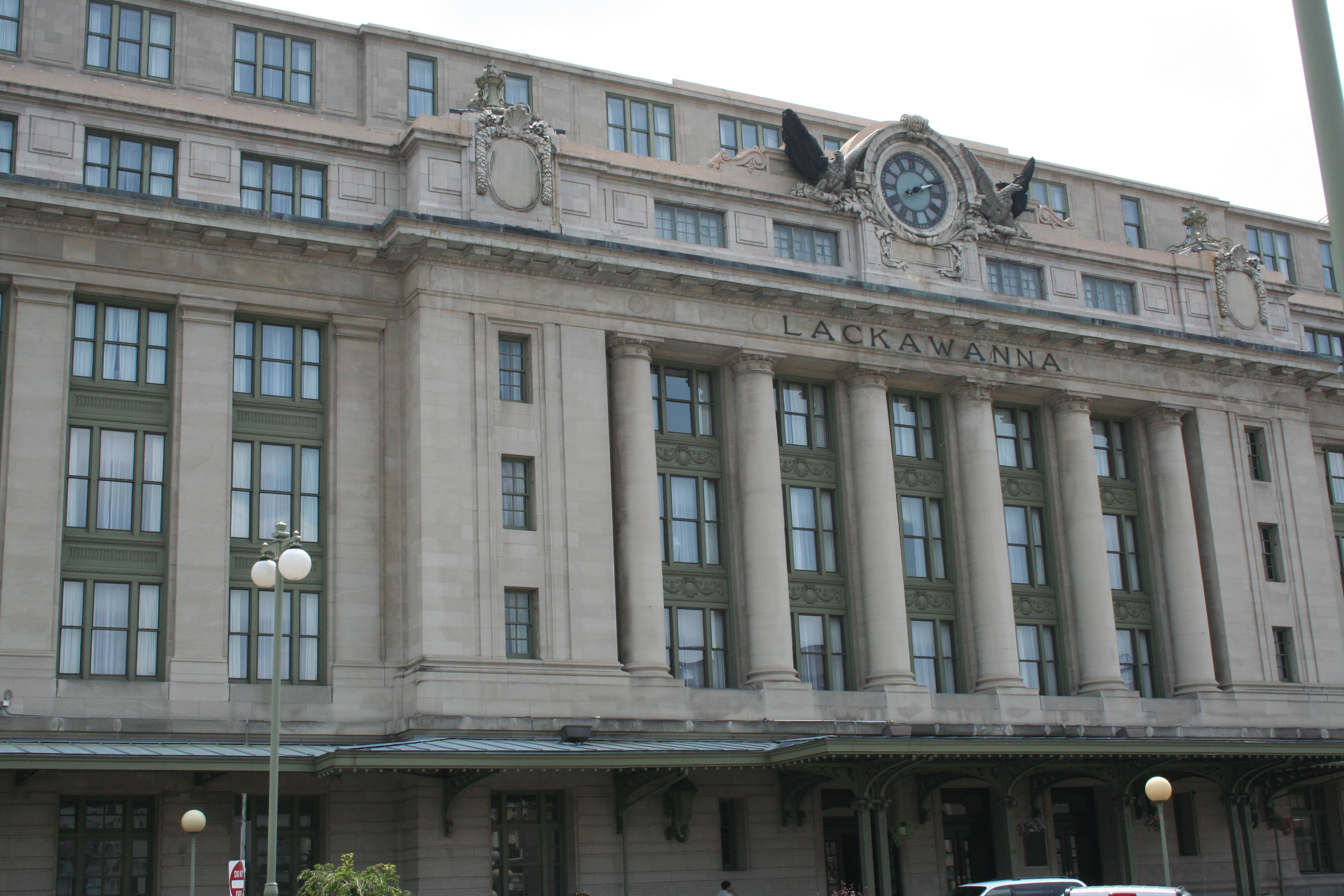 tomdobb / flickr.com
The exterior of the Lackawanna station, now home to a Radisson hotel.

Scranton was chosen because of its rich railroading history. It is located in an area laced with anthracite coal, which produced coalmines, innovative iron works, and a dense network of railways to transport it all. At the turn of the century, five railroad companies had major yards that ran through the Scranton area. Many of these railroads were created solely to serve the ironworks and coalmines and the immense amount of products they produced. Coal replaced wood as a main heating source and steam trains began replacing animal-powered transportation. Coal from Scranton was transported to far away cities, which was made easier by steam locomotion. Scranton cannot escape its ties to railroading past and was a great choice for a steam locomotive museum. Scranton was also able to offer Steamtown USA tax-free status and a “virtually intact railroad yard, storage sheds, and repair shops” from the old Delaware, Lackawanna, and Western Railroad.

According to park historian Pat McKnight, “Preserving steam locomotion is important because it played a major role in developing the United States as we know it today. Railroading helped us expand into the Industrial Age and move across the country.” In addition to preserving the history of America,

Railroads tied America together. In a way they are a microcosm of the country - the products they carried, the people who worked on the lines, and the towns they traveled through all have a story and provide insight into people’s lives. They provide a technological history, too. Modern inventions and buildings from the height of the Railroading age are still standing.

This is evidenced by Steamtown’s current administrative building, which was constructed for the DL&W Railroad in the early 1900s.

James Gillespie, once the general manager of Steamtown, feels that “almost everyone over a certain age in the country has had an involvement in the steam era.” Steam engines provided many practical and romantic roles, such as carrying people into towns to sell their goods or go to work, across the country on a honeymoon or to start a new life or soldiers off to war. Many people viewed riding the train as a step into adulthood. One early patron of Steamtown, 96 year-old Katherine Edwards, recalled getting married when she was 20 years old and riding the train from Elmhurst, Pa, to Scranton. She even met her husband at a train station, as young adults would go to the Elmhurst station after it closed to socialize. After seeing a 1984 article about Mrs. Edwards in the Scranton Tribune, one couple was inspired to hold their wedding on the train to Elmhurst, feeling “it would be a nice idea to start off our lives the same way.” 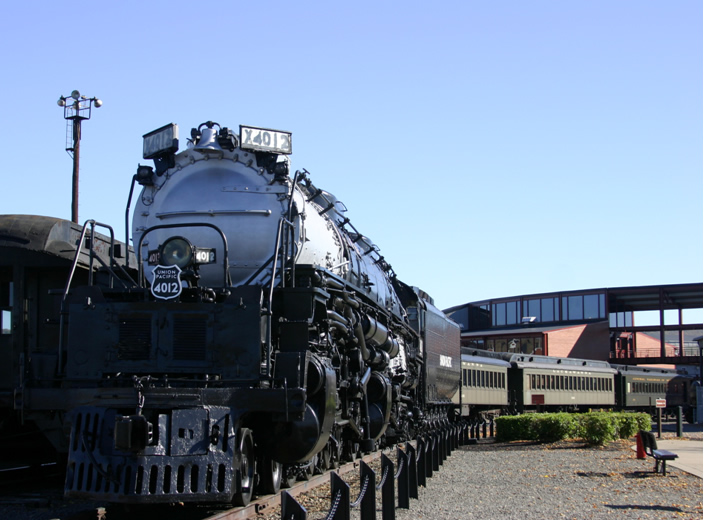 The Steamtown Foundation began moving over 100 pieces to Scranton in 1984. This cumbersome move involved transporting the non-functioning collection 285 miles, using a special train and tracks owned by three different companies. The centerpiece of Steamtown was the Union Pacific No. 4012, or 4-8-8-4 “Big Boy.” It is the largest steam locomotive ever built and features a 4-8-8-4 wheel configuration. Originally, 25 of these locomotives were built, and the one at Steamtown is one of only eight that remain. The Big Boy weighs in at an astounding 1.2 million pounds, is 133 feet long, and can travel at speeds of up to 80 miles per hour. The sole purpose of the Big Boy was to power through the tough mountainous terrain of the western United States. This locomotive logged over one million miles hauling freight trains through the Sherman Hill Divide in Wyoming to Utah before retiring in 1962.

The relocation of Steamtown was not without major controversy. Due to the way funding was procured, Steamtown is considered to be one of the largest pork-barrel projects in recent history. In 1986, U.S. Representative Joseph M. McDade attached a $20 million amendment to a multi-million dollar bill that set all federal discretionary funding for that year. This was done during a deal in the final hours before Congress recessed, and authorized the rail yards and Steamtown collection as “Steamtown National Historic Site.” This only made it possible for the National Park Service to take over the privately-owned Steamtown. McDade viewed this act as “the only way for Steamtown to meet with its serious financial problems.” Once discovered, McDade’s “back-room” deal was not taken well. Don Phillips, a writer for the Washington Post, criticized McDade for a measure that placed Steamtown “into the same category as Abraham Lincoln’s birthplace, Ford’s Theatre, and Rev. Martin Luther King Jr.’s grave.” He also disapproved circumventing the National Parks extensive process for creating parks and sites. Many felt that Congress was wasting money on a collection of little historic value, while ignoring “better collections such as the B&O Museum in Baltimore and the St. Louis Museum of Transport.” The bill for restoring Steamtown’s collection was only expected to grow.

Steamtown officials countered this argument, saying that Steamtown is a living museum featuring over 50 miles of track for excursions through northeastern Pennsylvania. Pat McKnight also argues that “there will never be one true National Museum for steam locomotion, as there are too many places with too many stories to tell. It would be impossible to fund or build them all. Steamtown also offers insight into history that can be translated into other similar places.” William Penn Mott, the Parks Service Director at the time, had previously said, “Nowhere in the United States do we tell the railroad story. We need to tell the story of railroading somewhere and [Scranton] would be the ideal spot. You’ve got the land, the buildings, the equipment.” 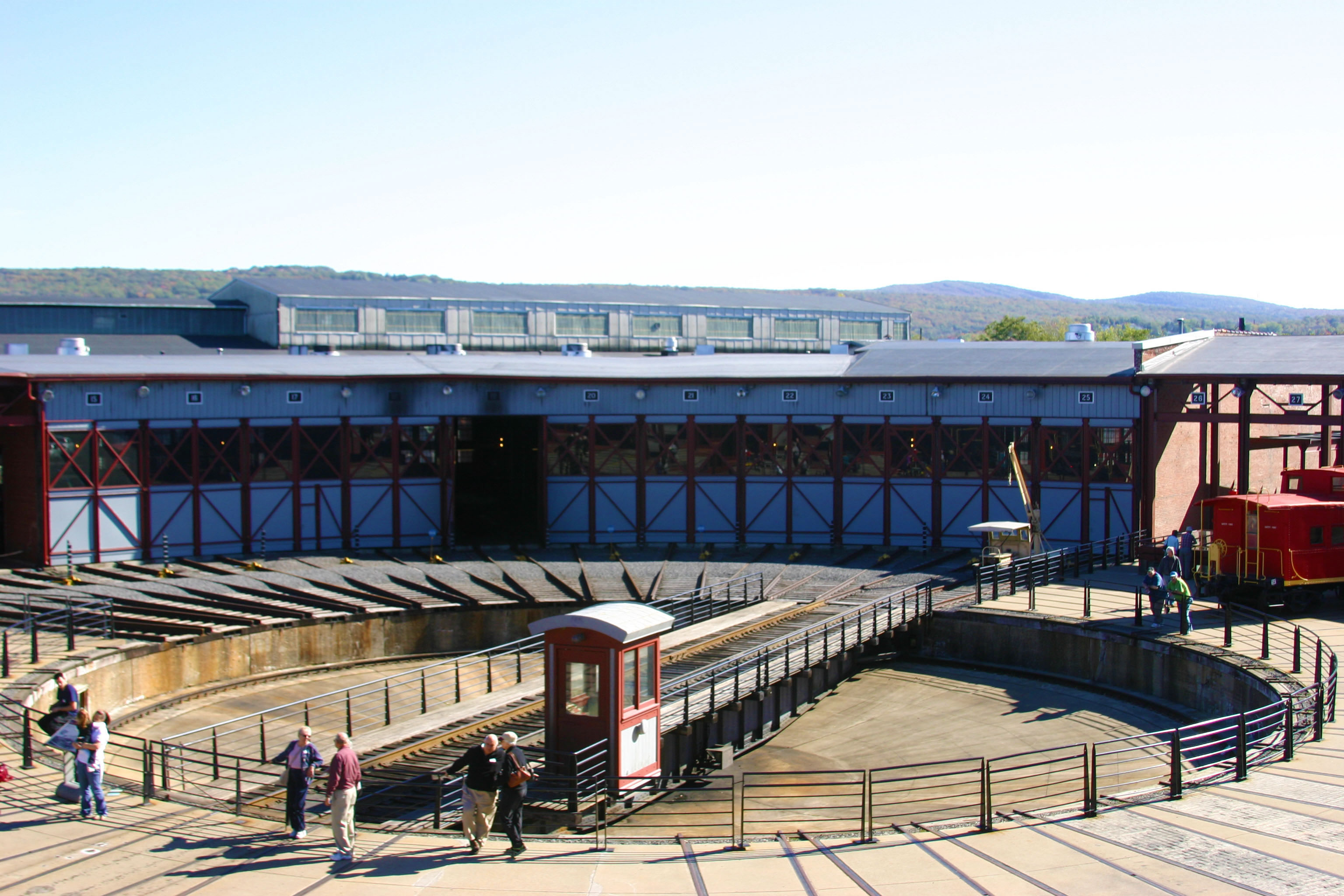 Catherine Caterson
The turntable inside the roundhouse redirects engines to appropriate tracks.

Shortly after this controversy, Steamtown sank into a $2.2 million debt. This was due, in part, to the gross overestimate of potential visitors. Many people were not willing to make the two hour drive – only 59,800 people of the anticipated 170,000 visited Steamtown in 1987. Attendance estimates were counting on many visitors coming from a popular nearby vacation destination, the Poconos; however, few people made the trip. Estimates placed per rider spending at $300 per person. Steamtown was forced to sell about 20 pieces of equipment to help reduce its debt and satisfy county funding requirements. Officials felt the only way for Steamtown to survive with its attendance rate was for the National Park Service to completely take over. In 1989, Steamtown gave Lackawanna County over $800,000 to take possession of Steamtown’s collection and settle debt with its creditors. Lackawanna County promptly donated the collection to the National Park Service, which has since run Steamtown.

After a rocky beginning, Steamtown has enjoyed growth and stability over the past several decades. Attendance has increased to about 100,000 visitors per year, which is a great accomplishment for an attraction that faced multiple foreclosures. Partnerships with Delaware Water Gap National Recreation Area and the Canadian Pacific Railway have allowed Steamtown to expand into hours-long excursions to the Water Gap and over the Nicholson Bridge in Nicholson, PA. Seasonal excursions, such as the Holiday Express, sell out months in advance. Steamtown can expect to enjoy relative peace and prosperity for many years to come.