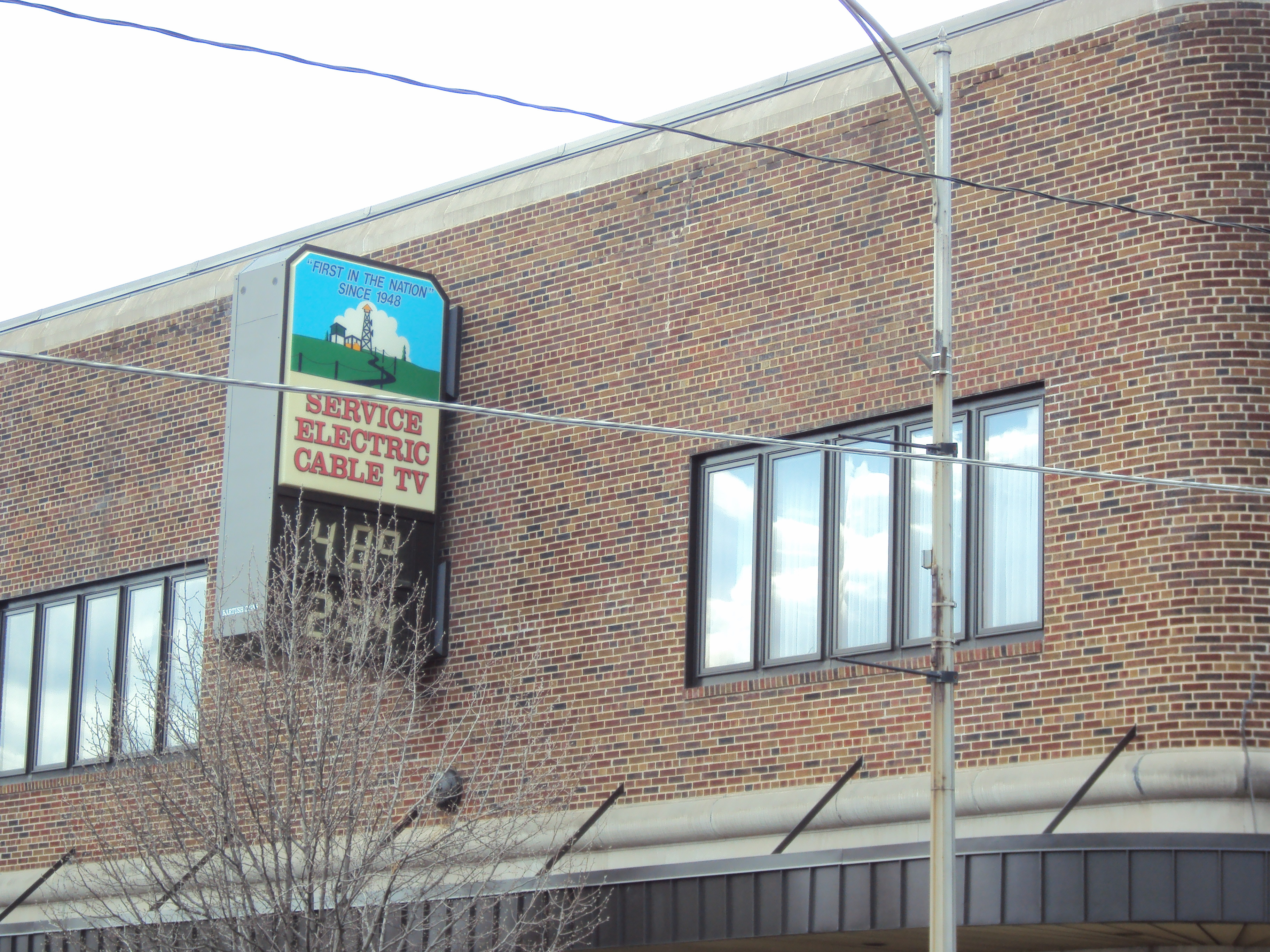 Asmall, secluded valley in Pennsylvania seems a strange place for a communications revolution. Yet the sprawling mountains that cut across the Pennsylvania heartland set the scene for a momentous technological advance—an advance that has revolutionized the way America, and the modern world, communicates. In its time this technological breakthrough was called “Community Antenna Television,” but now it is known as cable TV.

The valley cradles a tiny town called Mahanoy City in Schuylkill County. And like much of America during the 1940s, the people of Mahanoy City received their TV through broadcast antennas. These antennas transmit TV signals wirelessly from large cities in the area. Unfortunately for the people of Mahanoy City and other isolated areas, their beautiful mountain ranges made it almost impossible to get a decent TV signal over traditional antennas. But that all changed when a local man set out to find quality TV signals where none thought possible. That local’s name was John Walson. In the 1930s, before pioneering cable TV and running his own business, Walson was an appliance salesman. In an interview with Mary Mayer for The Cable Center, an organization charged with archiving the history of cable TV, Walson discussed his fourteen years of working with the Pennsylvania Power & Light Co., where he worked as a repairman. Walson credited this work with developing his interest in communication poles and electric appliances.

Later, in 1945, when the Pennsylvania Power & Light Co. decided to leave the appliance business, Walson made up his mind to use his expertise and experience to get into the electronics industry himself. In the same interview with The Cable Center’s Mary Mayer, Walson revealed he bought a franchise from a Williamsport company, the Lara Electric Co., and began selling appliances. 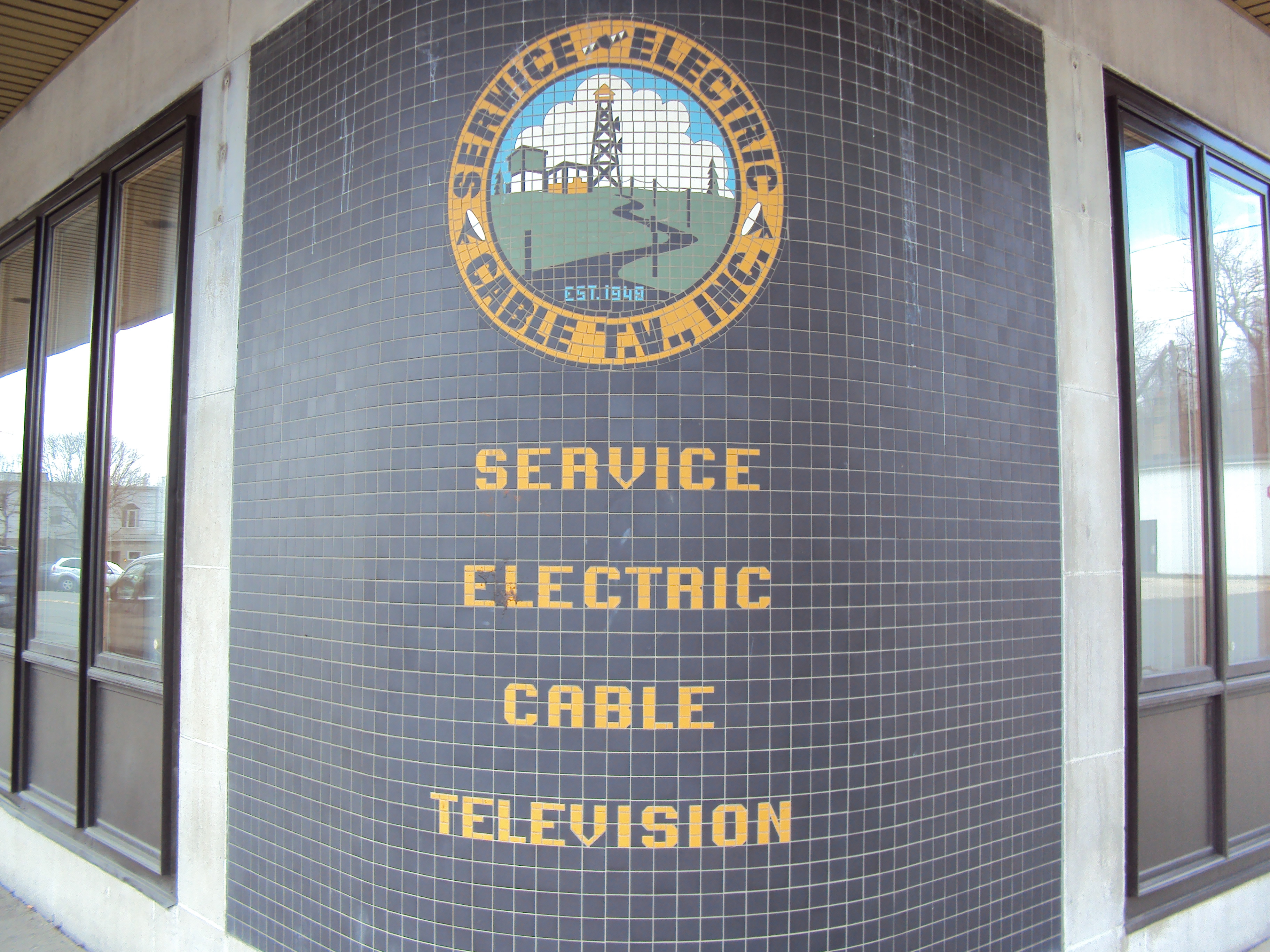 Drawing on his past experience, John Walson was an instant success, quickly becoming one of the busiest salesmen in Schuylkill County. His achievements motivated him to expand his product line. In 1947, Walson expanded to Mahanoy City, but struggled to sell TV sets to the local customers who could not get reception in town. Not only were customers dissuaded from purchasing TVs due to poor reception at home, but poor reception in Walson’s store made it almost impossible to demonstrate his merchandise.

The problem with the system was that the high mountains around Mahanoy City absorbed all of the TV signals, leaving the region in a shadowed area of poor coverage. Signal quality deteriorates without a direct line between antennas, which is why phone calls drop in tunnels and elevators. In the case of TV, this shadowing effect causes poor channel reception and fuzzy images.

As reported by the Boston Globe’s Hank Klibanoff in a 1981 article, for John Walson “[the situation] was simple. If he could improve reception on the new gadget called TV, he could increase sales.” So what did Walson do? According to the same Boston Globe publication “Walson put some Army surplus wire into his truck, drove up to New Boston Mt., jammed a 70-foot utility pole [with an ordinary antenna on top] into the ground and strung wire from the pole to his store in downtown Mahanoy City. The reception was great and the reaction quick. Sitting in lawn chairs in front of Walson’s windows, residents marveled at the clear images that traveled 80 miles from Philadelphia’s three TV stations.” This was the beginning of a fundamental shift in how people watched TV.

In spite of the momentous nature of the event, Walson made it sound easy. In his own words, he said in his interview with Mary Mayer: “In June of 1948, I went to Philadelphia and bought some [heavy-duty] twin-lead cable from Reliance Merchandising, … This twin-lead cable was run from the top of the mountain from an ordinary antenna and amplified every 500 [feet] with a top-of-the set booster which is a broadband amplifier.” 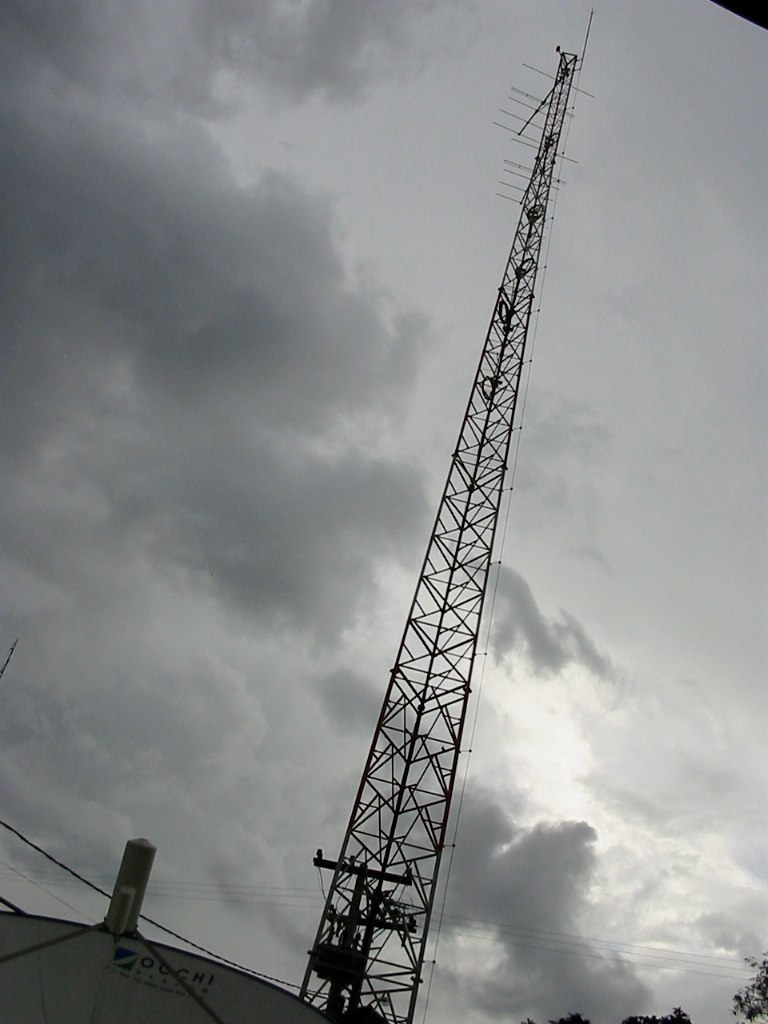 Joao Brando
An antenna similar to this one brought TV signal in from the mountains around Mahanoy City.

The antenna, mounted on a tall utility pole and placed in a clearing atop a nearby mountain, captured clear signals from Philadelphia. Since it was so high, it escaped the shadowing caused by the uneven terrain in Schuylkill County. Then the twin-lead cable or wire, which is almost identical to the wires that carry small currents in our homes, transmitted the signal down to the customers with the aid of amplifiers that periodically boosted the signal. Walson told the Cable Center that “One of the things that got me interested in going into cable TV in a large way was the crowd that gathered in front of my store when I brought the three channels down on an experimental basis in 1948. When I first put those three channels on, the street was completely blocked with viewers, people watching the pictures in the window....the old people stood right in front of the store, and they used to stay there until 12 o’clock, until the stations went off the air.”

After Walson’s improvements, all customers had to do was pay a small fee for cable connection to enjoy improved reception. Because the system required all of Walson’s customers in the community to share a single antenna, it was called Community Antenna Television, or CATV, for short. The venture was a booming success and word of CATV spread quickly. Soon, young entrepreneurs all over the state of Pennsylvania and the country were racing to enter the business.

One such notable entrepreneur was George Gardener, another Pennsylvania native. His story is documented in the book Blue Skies, A History of Cable Television (2008) by Patrick R. Parsons. Beginning in 1951 and using an electrical generator, an antenna, and a TV set, Gardner and his associates searched for service along the mountains near Yeagertown, Mifflin County. According to Parsons, “The set was needed because there were no readily available testing meters to indicate when a signal had been captured. You simply had to carry the set up the mountain, erect the antenna, fire up the generator, and hope for a picture. You had to look for the signal at night because the picture displayed on the TV screen was too faint to see in the daylight.” Transporting, resetting, and searching, Gardner finally found a signal on the mountain, “…and the evening that he did, he and his friends watched Channel 13, WJAC-TV, out of Johnstown, Pennsylvania, about 100 miles to the west.” Running cable down the mountain, he set up a demonstration TV set and began selling his cable service, the Lewistown Antenna Television.

Despite CATV’s surging popularity in Schuylkill County, the system was still far from perfect and many years from becoming the cable TV of today. In fact, cable TV remained a regional phenomenon for two main reasons. For one, the successful CATV systems of the late 1940s only offered the channels that were freely available to residents who could access broadcast TV. This limited CATV to mountainous or remote areas where the geography prevented residents from accessing free TV over traditional antennas. 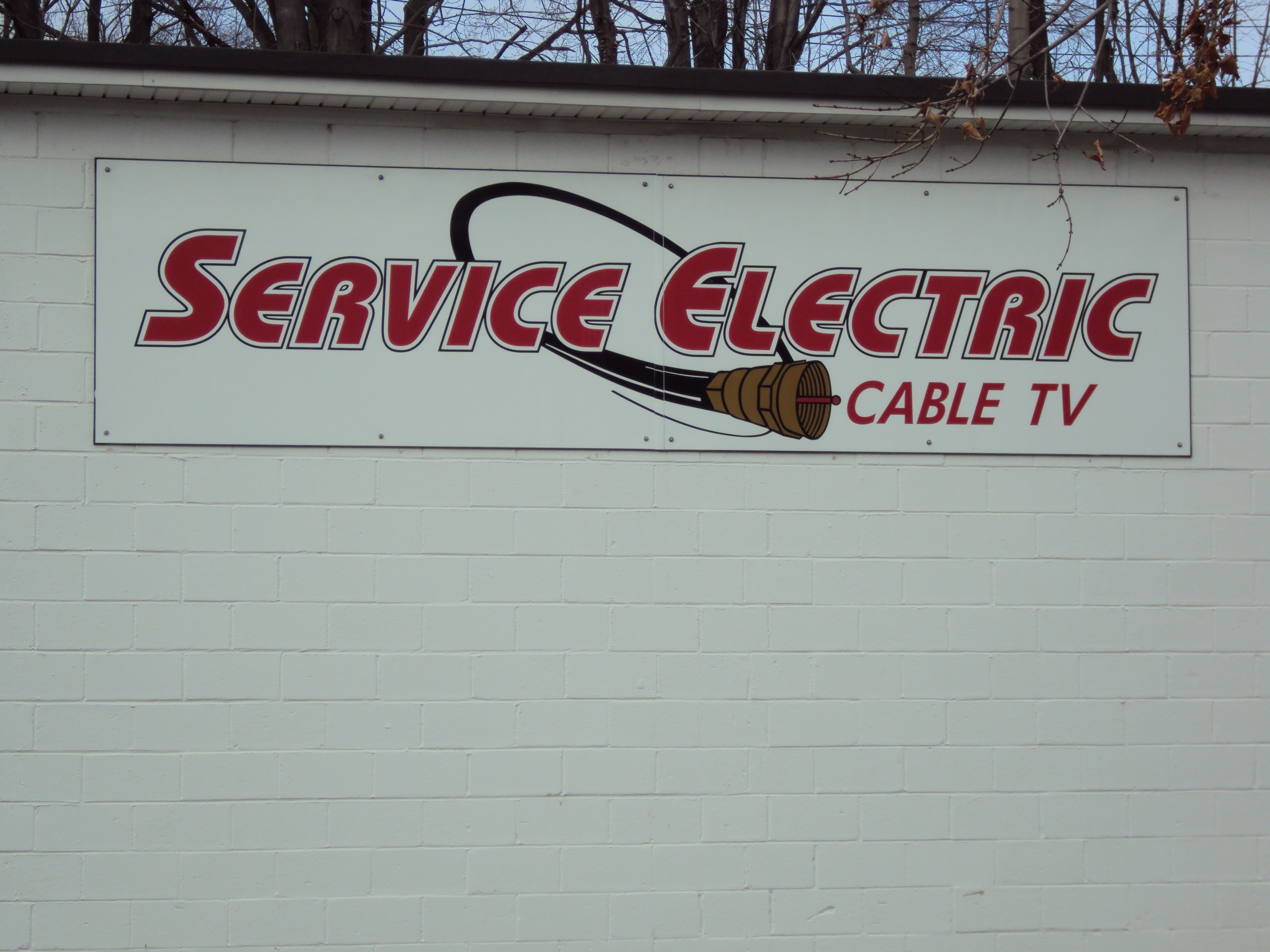 Second, the electronic cables used often introduced unwanted noise and their performance varied with the weather, making CATV unreliable. In his interview with The Cable Center, Walson commented that the original twin-lead cables produced poor signal quality when it rained. He even joked that of the "725 to 727 customers connected to [the company’s] twin-lead cable. [They] would have 725 calls [when it rained]."

By adding more antennas and making each antenna larger, CATV systems advanced to picking up more and more channels from sources farther and farther away. By 1950, the users of Walson’s CATV system were getting three channels from Philadelphia and two from New York. This was a notable upgrade from the three channels available in most American cities. But CATV did not stop there. The industry kept improving the antennas and amplifiers to facilitate additional channels at break-neck speed. In an interview with David Phillips for The Cable Center, Milton Shapp, the 40th governor of Pennsylvania and another local cable pioneer, remembered that “We started with three channels, then went to five, then to seven, and then we went to thirteen. I remember when we went to seven channels. There was no doubt in our mind that was all we were ever going to need. I mean, who wants more than seven [channels]?” 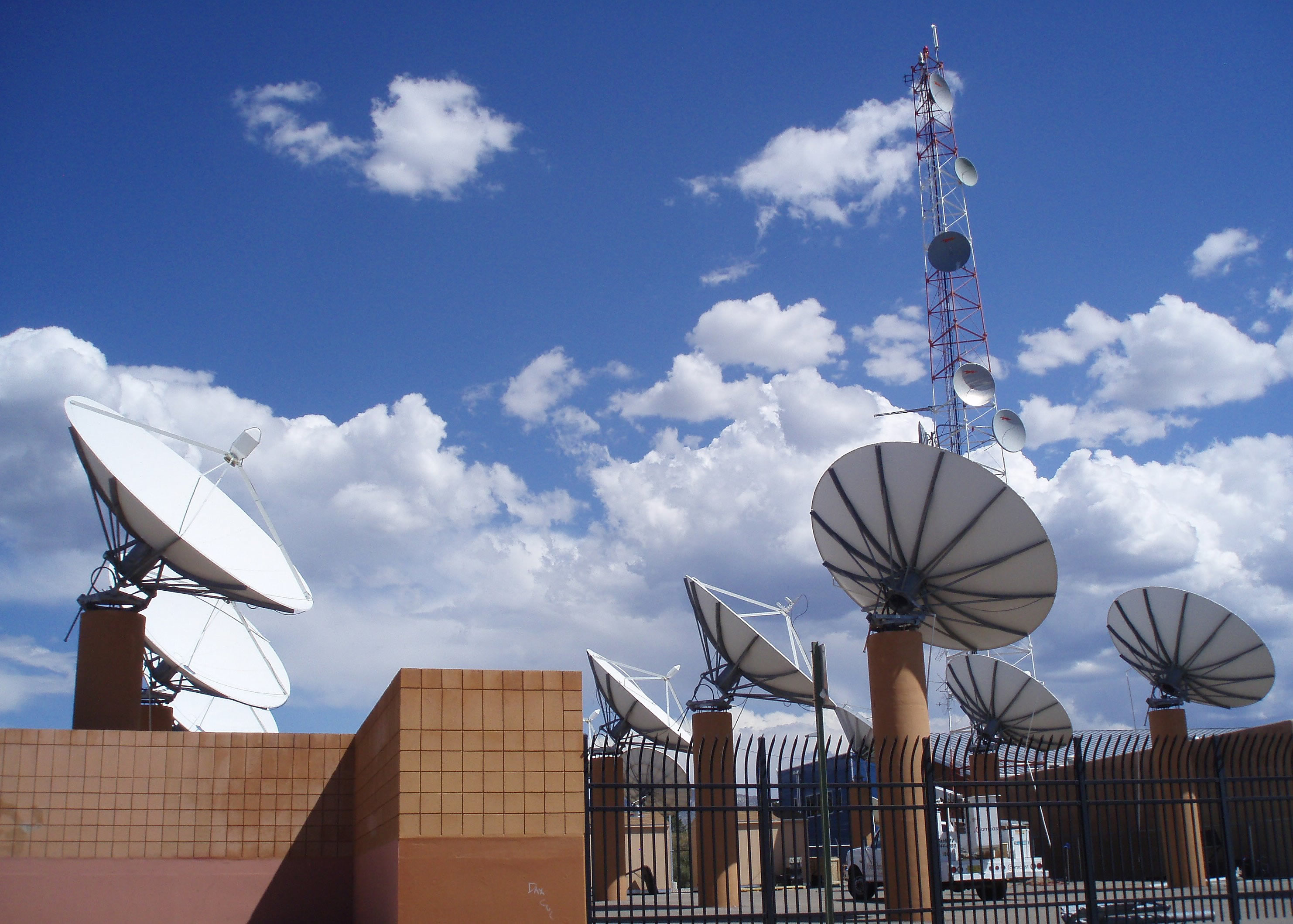 cjc4454
Cable companies can now bring in satellite signals from all over the world.

By replacing old twin-lead cables with coaxial cables, Walson and others in the industry were able to offer superior service. These coaxial cables used hollow cylindrical conductors to surround and protect internal wires from the environment and noise. This provided customers great reception in all weather, including rain. Over time, the internal copper conductors of these coaxial cables were replaced with aluminum for improved efficiency, allowing CATV systems to run signals further and provide service to more people.

Fueled by consumer demand and rapid technological advances, CATV began its steady march across the country and into our living rooms. CATV added more channels, features, and users every month for the next forty plus years, morphing into the cable TV of today.

According to The Federal Communication Commission (FCC), today’s cable systems “offer a wide variety of  programming networks, including news, weather, business information, movies, sports, general and special entertainment services, and programming designed for specific audiences, … offer programming on an on-demand and pay-per-view basis, and increasingly are allowing their subscribers to access programming on mobile devices. Over 90 percent of all cable subscribers have access to systems that offer a full-range of telecommunications services, including high-speed Internet access and telephone service.” 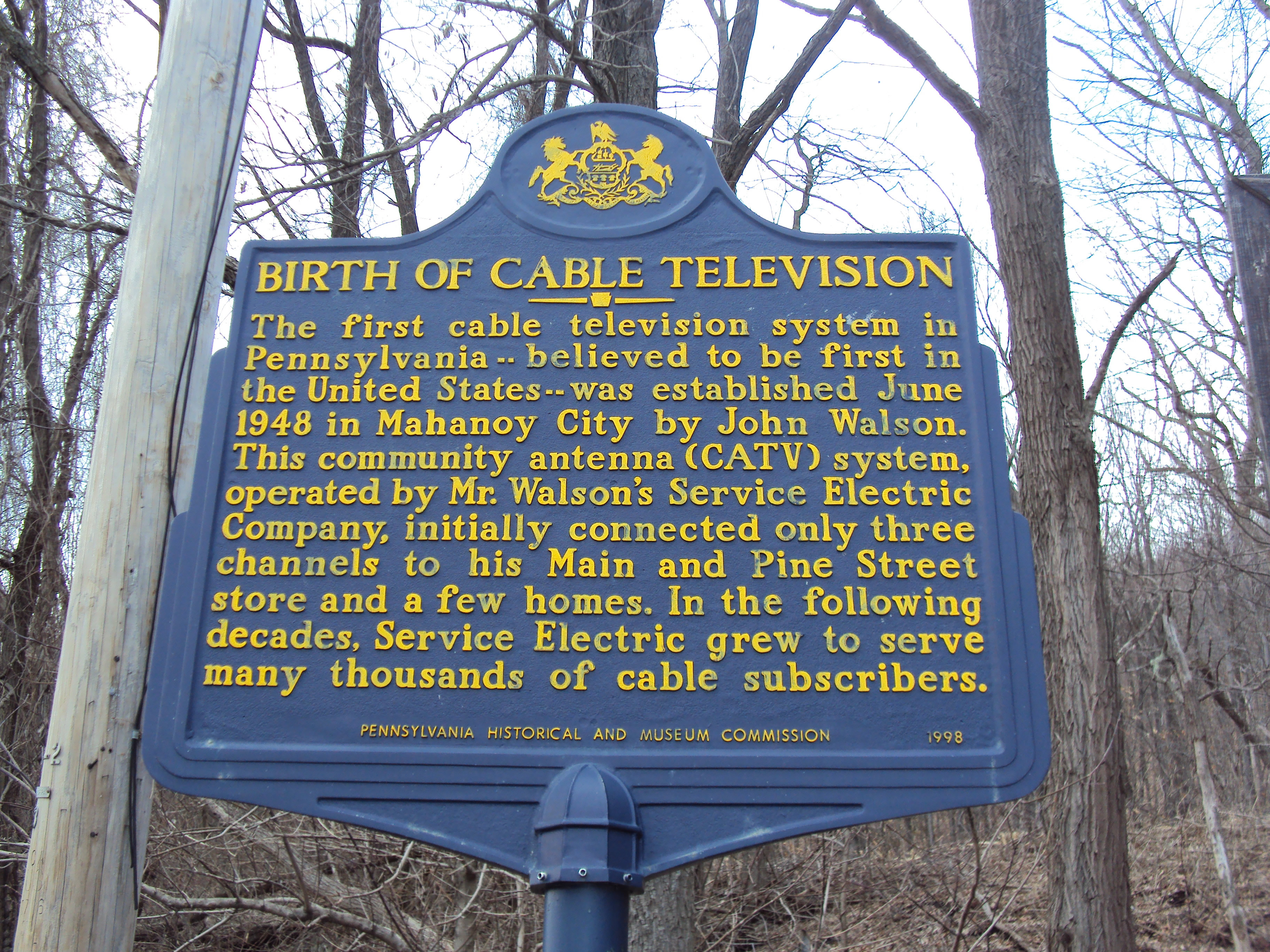 Alyssa Murphy
The State of Pennsylvania marked the birth of the cable television industry with this sign.

Cable TV plays a huge role in our access to news, learning about distant cultures, and connecting with pasts of the country and the world we have never before seen. The very fabric of democracy, politics, has been irrevocably changed by the 24 hour news cycle - an outgrowth of cable TV. Multi-billion dollar entertainment industries employing thousands have sprung up across the globe.

In line with its progressive history—originating in a small Pennsylvania valley to becoming an industry now represented by establishments such as the Rockefeller Center in Midtown Manhattan—cable TV continues to remain competitive, evolving to meet modern day needs and achieve customer satisfaction.