Wooden Pillows and Celibacy: Life at the Cloister

Jan Stryz, Michigan State Univ.
This silhouette, the only known image of Conrad Beissel, reflects his lack of regard for earthly vanities.

To most people, one meal and six hours of sleep each day sound like torture. Yet for the members of the Ephrata Cloister, these hardships represented an earthly sacrifice in exchange for an eternal paradise. The Ephrata Cloister, now a national historic landmark in Lancaster County, was once home to a thriving German religious commune. The Cloister, formerly referred to as the Camp of the Solitary, was one of the first religious communes in the United States. In 1732, Conrad Beissel, an immigrant from Germany, founded this mystical settlement of Protestant Sabbatarians after fleeing from Germany to escape religious persecution.

Conrad Beissel began his spiritual journey in Germany, when he converted to Pietism in Heidelberg. Pietism, a product of the European religious renewal, stressed "experiential faith" and ethical improvement, two qualities Beissel would later employ at Ephrata. Beissel soon had to flee Heidelberg when he faced legal troubles for his religious activities. After arriving in the colonies in 1720, Beissel settled in Conestoga, where he was baptized and later named the leader of a congregation. During this period, Beissel began certain religious practices that would come to typify the beliefs at Ephrata, such as observation of Saturday as the Sabbath and the promotion of celibacy over marriage. In 1732, Beissel gave up his leadership role and sought solitude at Cocalico Creek. Beissel's popularity kept him from being alone for long; members of his congregation followed him, beginning the settlement that would one day be known as Ephrata. 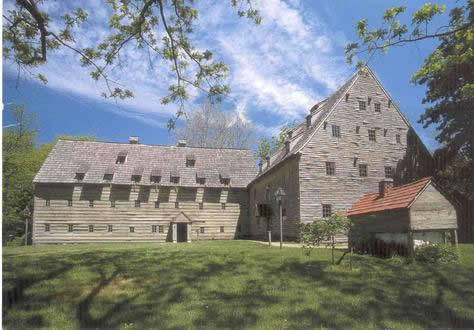 Unorthodox Traveler, IgoUgo.com.
The meeting barn at the Ephrata Cloister is typical of the commune’s architectural style. The low doors on Ephrata buildings reminded members that “the door to heaven is small.”

The name Ephrata, which to Beissel meant suffering, stemmed from Beissel's reading of the story of Rachel's death on the way to Ephrath or Bethlehem in Genesis 48:7. When Beissel's solitude was disrupted by his followers, he saw the community growing around him as a sign of struggle. Beissel believed that this trial, which would undoubtedly cause suffering, was a mark of the Church and could bring followers closer to God. Beissel believed another way to prepare his followers for eternity in paradise was to live earthly lives of self-denial. This self-denial was manifested in nearly all the followers' daily activities at the cloister. Members of the cloister followed a vegetarian diet, composed mostly of food grown in gardens throughout the cloister. The sparse meals generally consisted of bread, barley meal, and vegetables. In addition to the restrictions placed on what food members could eat were the restrictions placed on when they could eat it. Members were only allowed to eat in the evening, after a day full of mending, gardening, cooking, and other laborious tasks.

In another show of self-denial, the comfort of a bed was exchanged for a bench and a wooden pillow in sex-segregated communal houses. Sleep was limited to six hours each night, from 9 p.m. to midnight, and again from 2 a.m. to 5 a.m. From midnight until 2 a.m., members of the cloister attended a mystical midnight matins that featured Beissel's preaching, where worshippers were once again divided by gender in separate meetinghouses. Beissel chose this time because he believed that, if Christ should return, it would be in the middle of the night.

Ephrata is also renowned for its architecture, another form of Beissel's devotion to austere living. The buildings at Ephrata traditionally had low doorways and narrow cells and halls. Beissel purposely planned the tiny doors to teach members that "the door to heaven is small," and the narrow corridors to show "the narrow way to paradise through ascetic living."

An adherence to celibacy was another form of self-restraint at the cloister. Members of the cloister were divided into three main orders: the Householder group, formed of married couples with families, the Sisterhood, which was comprised of female unmarried celibates, and the Brotherhood, formed of male unmarried celibates. Only the Brotherhood and Sisterhood were allowed to become full members of the cloister, revealing Beissel's promotion of celibacy over marriage. A final distinctive mark of Beissel's followers was the observation of a strict dress code. Male and female members alike wore white hooded robes that extended to their feet. These habits included a "pointed monk's hood" for the males, and a rounded hood for females. 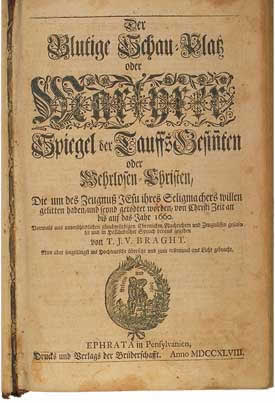 Beinecke Library, Yale Univ.
Printed at Ephrata, this is the title page of The Martyr’s Mirror.

Although by today's standards the life at Ephrata seems full of privations, the commune was in fact a safe haven for members trying to escape the horrors of religious persecution or for women hoping to avoid the life-threatening dangers of childbirth. Beissel's followers were also rewarded for their self-restraint with multiple outlets for artistic expression. Singing choral hymns, composing music and poetry, and printing paper were all accepted creative outlets for Ephrata members. The works created at Ephrata were not only for the enjoyment of its members, but also for all colonial Americans. The printing press at Ephrata was responsible for printing the largest book in the colonies, the Martyr's Mirror, which made it possible for colonial Mennonites to learn about their religious heritage. The Mirror, which describes the persecution of the early Anabaptists, remains so important to the Amish today that they regard it as second only to the Bible.

Ephrata's communal style of living peaked between 1745 and 1755. During this decade, approximately 300 people were members of the settlement or Householder families; however, this prime period was not to last. Attacks from both inside and outside the commune contributed to critically weaken the foundations upon which Ephrata was built. According to Jeff Bach in Voices of the Turtledoves, Beissel's conflicts with Israel Eckerlin were the first sign of trouble for Ephrata. Eckerlin, an administrative head within Ephrata, "steered members in a direction that was at odds with Beissel's vision of a separatist, severely ascetic lifestyle." Although Eckerlin was banished from Ephrata in 1745, his disputes with Beissel had planted doubts that weakened Ephrata at its core. After Beissel's death in 1768, the community began to crumble. The waning community then suffered an attack of typhoid in 1777 that killed a third of the commune, a disaster from which Ephrata never recovered. Ironically, it was the followers' strict adherence to celibacy that kept the commune from re-populating after the outbreak of typhoid, thus leading to the eventual abandonment of Ephrata. In 1814, the last four followers incorporated themselves into the German Seventh Day Baptist Church, closing the book on Ephrata's period as a commune. Although the Ephrata Cloister is uninhabited today, it comes to life again with visitors from all over the country. Daily tours allow visitors to view seven historic buildings from the Cloister and to see tour guides dressed in the distinctive monastic dress of Beissel's followers. Many of the buildings at Ephrata are original structures from its period as a commune, including the bake house, where Beissel's followers baked the bread that formed an integral part of their diet, as well as the carpenter's house, one of the oldest remaining structures. Conrad Beissel's house, constructed in the 1740s, still stands. The house, built between the houses of the Brothers and the Sisters, was used to hold meetings and welcome guests. Saron, the Sisters' House, is also still standing. This three-story building contains a kitchen, workrooms, and twelve sleeping chambers, which still contain hard wooden benches like those the Sisters slept on. Visitors can also see the Saal, or meetinghouse. There was a Saal each for the Brothers and the Sisters, and they were often used for lessons and scripture readings. The Academy, or the school on Ephrata grounds, is also open for visitation. Students at the Academy were schooled in subjects as diverse as chemistry and astronomy, before the school was opened to the public in the mid 1800s. 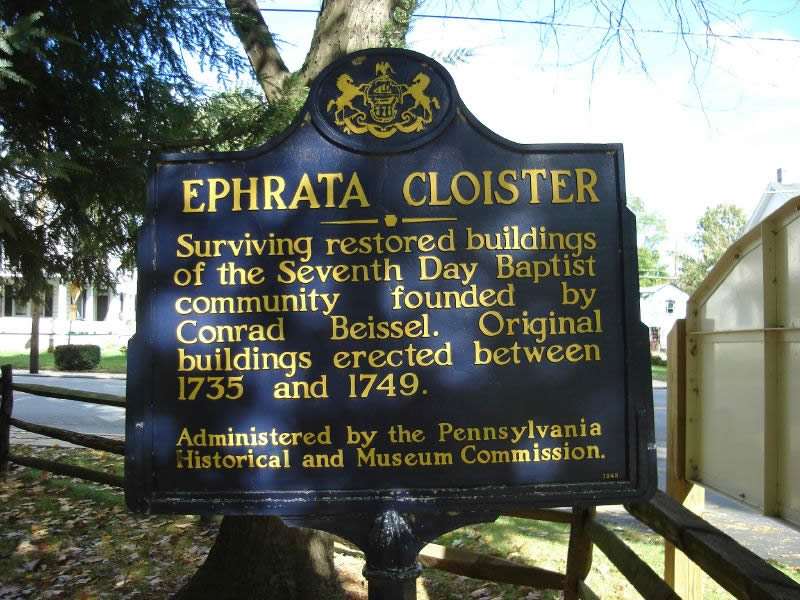 BreathLess'56, Flickr.com.
The Ephrata Cloister, founded in 1732, is colonial America’s most famous commune as well as a national historic landmark.

To supplement the tours of the buildings and grounds of Ephrata, the cloister offers an extensive calendar of events to allow visitors a hands-on feel for what life at the commune was like. Year-round events offer the opportunity to sample foods that were served at Ephrata, to learn about how the distinctive monastic robes were made, to watch the techniques used to construct Ephrata's buildings, and to attend concerts of original Ephrata music. Visitors who fall in love with Ephrata can take a piece of it home with them; the on-site museum store offers Ephrata-inspired artwork, jewelry, and music. Budding historians can visit the Shady Nook Book Corner, which keeps Ephrata's publishing history alive. Ongoing research continues to educate visitors and history lovers alike about the legacy of Beissel and his followers.

Conrad Beissel could not have imagined the new direction Ephrata would take after his death. Ephrata, the isolated commune, now welcomes in visitors from all over the nation. What Beissel had pursued in the name of spiritual solitude has turned into a tourist attraction that attempts to share the values of Beissel's followers with future generations through the music, artwork, and books produced at the commune. These efforts, no matter how honest their intent, have reduced the complex aims and ascetic lifestyle of Ephrata to a set of strange customs visitors can sample for a day. The monastic robes and strict diet religiously observed at Ephrata have become quaint idiosyncrasies tourists can try on for size. In what is perhaps the greatest irony in view of Beissel's beliefs, the cloister that renounced worldly possessions now has a gift shop.