For the music lover, Philadelphia has no shortage of venues for shows and performances. However, often times the setting takes away from the performance rather than adding to it. In large stadiums, like the Wachovia center, booming speakers exasperate eardrums while columns and pillars block sightlines. Midsize clubs, such as the Tower Theatre, are standing room only, leaving the feet aching and blistered. Typical bars and cafes, like Chris’s Jazz Café, offer seating, food and drink, but noises from the kitchen and bar disrupt performances, and patrons leave with clothes smelling like ashtrays. And woe be to anyone brave enough to use the repulsive bathrooms at any of these sites. But all this is different at one Philly music venue. World Cafe Live combines exceptional musical acts with an atmosphere unmatched in comfort and quality.

Located on the edge of the University of Pennsylvania campus, at 3025 Walnut St., World Cafe Live is combination restaurant, music hall and radio studio. The downstairs is dubbed Downstairs Live, a three tiered hall, which normally allows for 350 people seated, but can hold 650 standing if the act calls for it. Upstairs Live is a café style area that comfortably seats 100 and contains a stage which usually features local acts and emerging artists. Both spaces provide high quality food and beverage, and the establishment has remained smoke free since its opening in 2004. The building also houses the studios and business offices of Penn’s public radio station, WXPN, which features interviews and performances of acts on the nationally syndicated radio program World Café. But the unusual partnership between the non-profit radio station and the for-profit restaurant goes back much further than the venue’s opening. 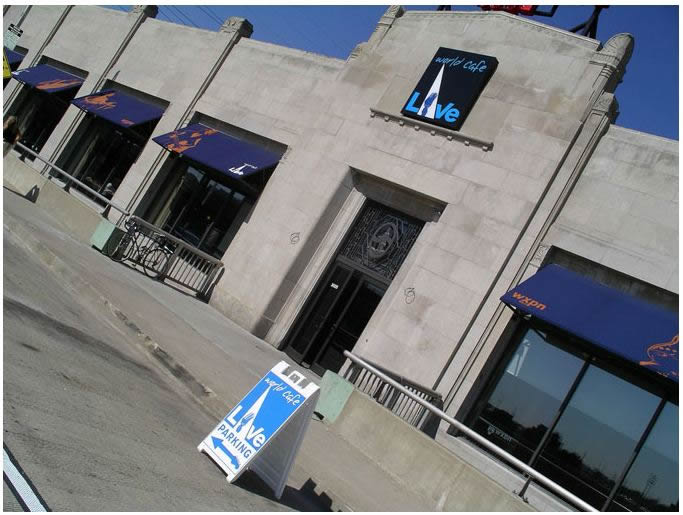 Long before there was World Cafe Live, there was WXPN. Since the 1970s the member-supported radio station had been broadcasting out of run-down buildings on Penn’s campus. Though it was only a small, student-run operation, the station began developing a loyal following. In 1991, radio DJ David Dye began airing World Café, a program which consisted of interviews and live performances from eclectic and sometimes obscure songwriters, folk artists and indie bands. Despite the fact that he was broadcasting out of a small, makeshift studio on the third-floor, Dye’s program became a hit and is now syndicated in over 170 cities nationally. But operation was a great hassle. During one performance, the Wallflowers were forced to carry a grand piano up two flights of stairs. WXPN was in desperate need of new facilities.

This is where World Cafe Live founder Hal Real came in. An entrepreneur, previously an attorney, previously a jazz-pianist, Real was eager to turn his love for live music into a business plan. He recognized the desire for an upscale music venue, and the opportunity to capture a market. Real said, “There are 80 million people over the age of 30 in this country, and most of them love live music. But they have no place to go.” In 1998, the longtime WXPN supporter had an epiphany while listening to Dye’s World Café program. He would capture an audience for his venue by partnering with the radio station and adopting the valuable brand name World Cafe Live. Real contacted Dye and WXPN station manager Vinnie Curran and proposed his idea. Though he gained their support, Real found it much more difficult to convince the real decision makers: the tangled bureaucracy of officers and trustees at the University of Pennsylvania. After years of negotiation and searching for a location, in 2002 Real was able to secure a site and an agreement from Penn. The location: the Hajoca Building on 31st and Walnut—an abandoned toilet factory. 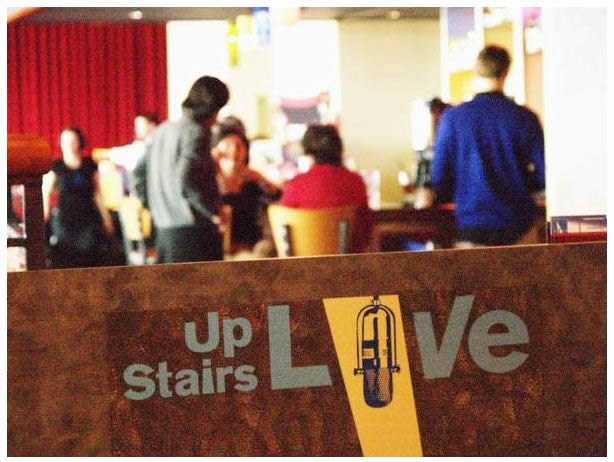 World Cafe Live
Upstairs Live has an intimate cafe and live radio broadcasts and performances throughout the week.

The building was chosen not for its “soot-encrusted windows, dank cement walls, [and] water logged ceilings,” but for its easy access from center city and closeness to Penn’s campus. Every part of the new building was designed with music performance in mind, heeding both the artist and the listener. When people saw a music performance at World Cafe Live, Real wanted them to remember not only the music, but the atmosphere as well. The acoustics of the building allow for three acts to be playing simultaneously, one downstairs, one upstairs, and one recording in the WXPN studios, without any cross contamination of noises. Even ice makers and air conditioners are positioned so that no noise pollution spills into the performance area.  Pillars and obstructions were removed to ensure that patrons have a clear view of the stage, regardless of where they are sitting. David Shultz, architect at DAS Architects and Designers, the firm that was contracted for the renovation of the Hajoca building, explains, “Because the space is wide and shallow, nobody is more than 60 or 70 feet from the artist. Most places you never get to see the eyeballs of the performer; you can see them here.” Even the surrounding area was renovated to accommodate parking for 200 cars. The sum of all the efforts offers patrons great food, a comfortable atmosphere, and music quality that journalist Mike Pollock of Out and About magazine describes as “like wearing headphones”

With so much thought in the design of World Cafe Live, it is no surprise that the venue is a hit with both performers and audiences. The stages have showcased musicians from all genres and skill levels, ranging from local amateurs to emerging artists to world class acts. International stars Wycleff Jean, John Fogerty, Akon, and Edwin McCain, among others, have all graced the Downstairs Live stage. The performers can especially appreciate the atmosphere and quality. Drummer Woody Sutton, who has played several times at World Cafe Live, said, “You walk in and it’s a place you want to be. It’s not like, ‘What’s up with the bathrooms.’ or ‘Don’t touch the walls.’ You walk in and you feel at home.” Booking agents at World Cafe Live also seem to have a knack for identifying underground artists who are likely to breakthrough into the mainstream. James Blunt, Matisyahu and K.T. Tunstall all played at the venue before they went on to become pop sensations. Part of the reason for their successes is the fact that playing at World Cafe Live can get a song broadcast throughout the Philadelphia area on WXPN, or nationally on Dye’s World Café radio program. 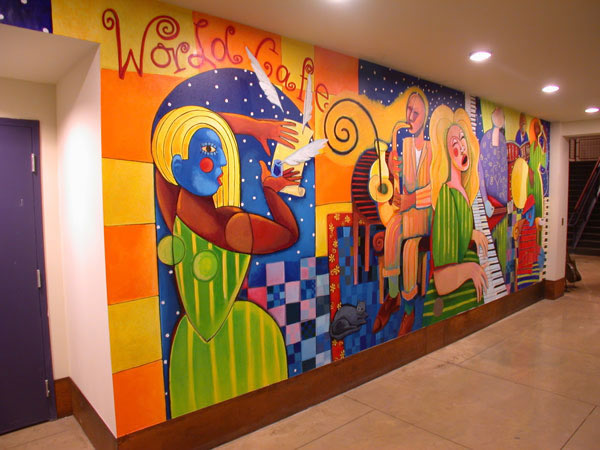 Disillusioned by corporate landscape of big record labels and media conglomerates, Real is particularly proud of the chances World Cafe Live gives to local musicians, saying, “Most stations are owned by three companies; there are five real record labels left. Where is the next Bob Dylan going to get played and heard?” Every Monday night on the Upstairs Live stage is an open mic night called ‘Philly Rising.’ Singer/songwriter and Philadelphia local Bill Butler plays at Philly Rising regularly. About the venue he said, “You go to some (other bars) people throw beers at you. Not here. It’s nice that if you take the time to write a song…people listen to you sing it.” Playing at the open mic may also give talented artists publicity beyond the immediate audience at the show. The staff at World Cafe Live pick the most exceptional acts and invite them to a perform at ‘Cream: The Best of Philly Rising.’ This contest, held on the first Friday of every month, is a tremendous opportunity for aspiring professional musicians. Winners are given five hours of studio recording time and are frequently invited to open for more established acts.

Real is also a philanthropist dedicated to bettering the city of Philadelphia and inspiring youths with the gift of music. One of his programs was MusicLab, an educational program designed to inspire children to continue their musical development. Tom Emmi, education director at World Cafe Live, said, “the program seeks to serve students in the region who receive little or no formal music education in school.” These sessions have also been recorded and sent to public schools around the region as a 30-minute instructional DVD. Though not a part of World Cafe Live anymore, it marks the sort of programming Real has run over the years. The acoustic perfection of the music hall and high quality recording devices used to film the sessions have made the DVDs the next best thing to attending the program in person.

Any music lover would be remiss not to visit World Cafe Live at least once, either in Philadelphia or their second venue in Wilmington, Delaware. Customers will receive excellent service, dine on first-rate cuisine at affordable prices, and see an excellent show. They may even witness the birth of the next music superstar. In a torrent of seedy bars, packed nightclubs, and corporate arenas only interested in the bottom line, World Cafe Live remains a beacon of quality for music venues worldwide.

The Center would like to thank World Cafe Live for its help in illustrating this article.