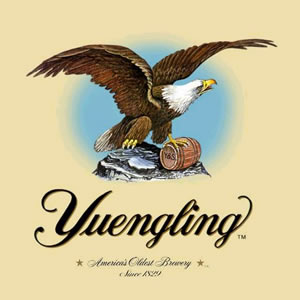 bdonaldson/scu.edu
Yuengling Brewery of Pottsville boasts of being the oldest brewery in the country.

Many American families can trace their ancestry back to the European nations of Germany, Ireland, and England. When these families came to America centuries ago, they brought with them a range of unique cultures and customs. One in which they all share is beer. Each of the three European countries mentioned ranks among the top six countries in the world for annual beer consumption per capita. Likewise, the United States comes in a respectable no. 8. This hefty habit has sustained the production of beer as a major industry in the United States. Of all American breweries over the centuries that have come and gone, there is not one more revered than the D.G. Yuengling and Son Brewery. Spanning over 180 years of family business, and among six generations, D. G. Yuengling’s brewery not only survived the Prohibition Era, but also boasts the title of “America’s Oldest Brewery.”

The history of beer can be traced back to as early as 4300 b.c. in Babylonian, Egyptian, and even Incan cultures. The adaptation of hops into what we know as the present-day form of beer came about during the early Middle Ages (500-1000 a.d.) Since then, the evolution—and popularity—of beer has been exponential. William Penn, the founder of Pennsylvania, even owned and operated a brewery. Before the 1800’s, beer was really “ale,” a method using a top-fermenting brewers’ yeast. It was not until the 1830’s that the lager style of beer, in which uses bottom-fermenting yeast, was created by Bavarians Gabriel Sedlmayr of Munich and Anton Dreher of Vienna. 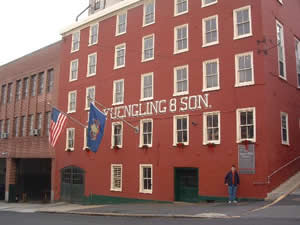 mafisc/tripadvisor.com
The Yuengling Brewery on Mahontongo Street is a must-see in Pottsville.

In 1823, a German by the name of David G. Jüngling immigrated to the United States from Aldingen, a town in the Kingdom of Württemberg, Germany. After anglicizing his name to Yuengling, he established the Eagle Brewery in 1829 on Centre Street in Pottsville, Schuylkill County. In the 1850’s, other German immigrant brewers such as Anheuser, Busch, Miller, Coors, Stroh, Schlitz, and Pabst introduced cold maturation lagers to the United States. The modern era of brewing then began in the late 1800’s with commercial refrigeration (1860), automatic bottling, pasteurization (1876), and railroad distribution.

It was not long before the Yuengling’s Eagle Brewery experienced disaster when a blazing fire completely destroyed its plant and headquarters in 1831. The quick reconstruction of the brewery on its current location on South 5th and Mahantongo Street was an early sign of the company’s lasting resilience. Although David’s first son, David Yuengling Jr., left Pottsville to establish the James River Steam Brewery in Richmond, Virginia, his second son, Frederick Yuengling, became a partner of the Pottsville operation in 1873. To reflect the new partnership, the company was renamed D.G. Yuengling and Son Brewery.

Frederick ran the brewery until his death in 1899, and the family’s legacy was passed on to his only son Frank. Before the turn of the 20th century, the operation expanded with the addition of three breweries in the cities of Saratoga and New York City, New York, and Trail, British Columbia. Frank ran the company for the next 64 years, weathering their most difficult challenge to date—Prohibition. 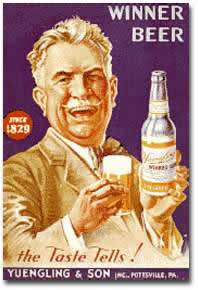 In 1919, the 18th Amendment was ratified, which outlawed the sale or production of alcohol. The Prohibition Era forced many American breweries out of business. Frank predicted the Prohibition would be short lived and strategized to insure his company’s survival throughout the tough era with four near beer recipes (Yuengling Specialty, Yuengling Por-Tor, the near beer version of the Celebrated Pottsville Porter, and the experimental cereal brew, Yuengling Juvo) and a dairy constructed adjacent to the plant which sold ice cream and other dairy products up until 1985. Near beer was a malt beverage that did not contain enough alcohol to be considered a true beer, and was therefore legal to produce and sell. The tough fourteen-year Prohibition Era ended in 1933, and the brewery celebrated by making the “Winner Beer” and sending a truck full of bottles to President Roosevelt to express its appreciation. The brewery then began a large modernization program, in which included “a new building for fermentation and storage, a new boiler house and brew house, as well as new loading facilities.” The company resumed brewing its original beers until Frank’s death in 1963.

The company was then managed by his sons, Richard L. and F. Dohrman. The country saw national breweries take off in the 1950s and ‘60s, and this, coupled with a decline in local demand, posed new challenges for the management. The company continued the modernization program by replacing the old copper kettles with new stainless steel ones. Dick Yuengling Sr. praises the hard work of his father and uncle, “If it wasn’t for their loyalty to the business during that very difficult time, the company wouldn’t be here today.” The year 1976 marked a special time for Americans, as it was the 200 year anniversary of the signing of the Declaration of Independence. In celebration of the Bicentennial, the Yuengling family was rewarded as their brewery was placed on national and state registers as “America’s Oldest Brewery.” According to current president Dick Yuengling Jr., “It was the celebration of the Bicentennial that generated renewed interest in us.”

Yuengling.com
Yuengling has remained in the family through several generations.

In 1985, Richard (Dick) L. Yuengling Jr., bought the company from his father. The sales-boost that the Bicentennial generated was proving to be too little for the company to survive on, so Dick had to try new risky ideas to help the company avoid a tragic failure. Dick invested the majority of the company’s earnings in updating equipment. The modernization which had began more than 50 years prior was finally starting to reap benefits. Dick claims, “Changes we’ve made over the past few years are beginning to pay off for us. New packaging, increased advertising, and an exceptional distributor/wholesaler network have helped us capture the attention of consumers who are looking for a unique top-quality brew from a small brewer.”

Two years later, the company, thriving under its new America’s Oldest Brewery slogan, reintroduced the Yuengling Traditional Lager, which had not been produced for decades. The decision for reintroduction came from the increase in demand for heavier beers. This beer has served as the flagship taste of Yuengling since then and has developed a unique niche among all beers. There are over 1,000 different lagers, but D.G. Yuengling and Son is so widely known that anyone who orders a “lager” in some areas will get Yuengling’s one-of-a-kind Traditional Lager. According to the company, their lager is famous for its “rich amber color and medium-bodied taste.” Before 1990, two more recipes were produced: the Premium Light Beer and Yuengling’s Original Black and Tan.

Beers consumers have mixed opinions about Yuengling’s traditional product. Travis Edwards of the United Nations of Beer relates the quality of the lager to that of Keystone Light, and says “the beer itself should never be seen outside of college refrigerators, which lack the ability to have standards.” His review was met with striking criticisms. One reviewer labeled Edwards a “micro brew snob.” In fact, Yuengling is not a beer to be judged by beer lovers. In a review by Mike Barkacs, Yuengling Traditional Lager is “about as American as you can get.” The beer is not something to look at and admire, he continues, “the flavor is not complex. It’s not going to lead to discussions about whether or not you can taste the plum undertones. This is a beer you knock back while wolfing down burgers and dogs hot off the grill, tossing a ball around, or just lounging around watching everyone else do all that.” 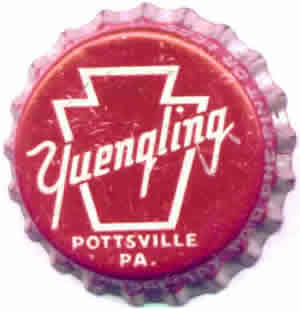 TheBottleCapMan
A Yuengling bottle cap from the past, reflecting the beer's Pennsylvania roots.

Still at the helm of the brewery today, Dick has continued to grow his company since taking over. David A. Casinelli, Vice President of Sales and Marketing, said in a brochure, ‘‘Over the past few years, we have made significant financial commitments to advertising. Our primary goal has always been to maintain our regional prominence while having the ability to expand into new urban markets.’’ In 1999, the company acquired Stroh Brewery in Tampa, Florida, expanding its market even further. Dick announced the company’s plan to build a new plant to keep up with the growing demand. The new plant was completed in 2000 and is currently located in Port Carbon, Schuylkill County. The family owned brewery has kept the headquarters in the same town since 1829, and the same structure since 1831, which serves as a testament to the brewery’s dedication to the local market and their rich history. Although the company has not expanded in the last few years, it says that its plans for expansion “are based upon our production capabilities and our ability to properly introduce and service retailers and customers in any new market. Such decisions are based on a market by market basis.” The company acknowledges that there is a demand for its beers across the country, but has proceeded cautiously with its expansion, being sure to not forget its customers and markets still loyal to their beer today.