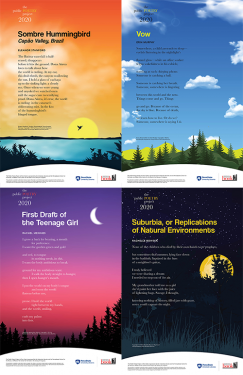 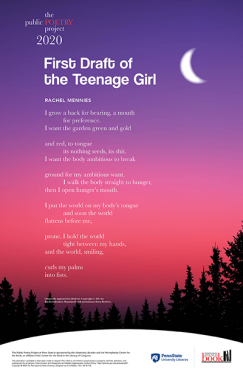 I grow a back for bearing, a mouth
for preference.
I want the garden green and gold

and red, to tongue
its nothing seeds, its shit.
I want the body ambitious to break

ground for my ambitious want.
I walk the body straight to hunger,
then I open hunger’s mouth.

I put the world on my body’s tongue
and soon the world
flattens before me,

prone. I hold the world
tight between my hands,
and the world, smiling,

curls my palms
into fists.

Originally appeared in Berfrois. Copyright © 2015 by
Rachel Mennies. Reprinted with permission from Berfrois.

The inspection of the speaker’s desires leads to a wonderfully ambiguous and evocative closing image.

Rachel Mennies’ poem is fearless and demanding and somehow still sensual at the same time. “First Draft” introduces some extremely complex metaphors and abstractions that open up a narrative that is raw and unfolding at its own speed.

Rachel Mennies reads her poems, including "First Draft of a Teenage Girl" (video) 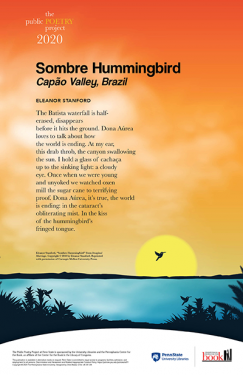 The Batista waterfall is half-

erased, disappears
before it hits the ground. Dona Aúrea
loves to talk about how
the world is ending. At my ear,
this drab throb, the canyon swallowing
the sun. I hold a glass of cachaça
up to the sinking light: a cloudy
eye. Once when we were young
and unyoked we watched oxen
mill the sugar cane to terrifying
proof. Dona Aúrea, it’s true, the world
is ending: in the cataract’s
obliterating mist. In the kiss
of the hummingbird’s
fringed tongue.

The breadth of this illusion of a conversation is astounding, and the poem’s use of line is sophisticated and articulate.

Eleanor Stanford’s poem reminds me that even in beauty, there is an apocalypse waiting to happen. The poem leads the reader through a landscape of a very specific place, and through that specific place opens up into a much more global and even ubiquitous realization that everything around us possesses a delicacy and fragility that makes it mortal. 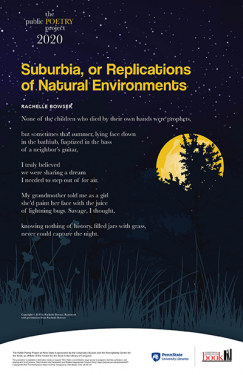 Click to view the poster
Suburbia, or Replications of Natural Environments
Rachelle Bowser

None of the children who died by their own hands were prophets,

but sometimes that summer, lying face down
in the bathtub, baptized in the bass
of a neighbor’s guitar,

I truly believed
we were sharing a dream
I needed to step out of for air.

My grandmother told me as a girl
she’d paint her face with the juice
of lightning bugs. Savage, I thought,

knowing nothing of history, filled jars with grass,
never could capture the night.

The vestiges of religious dogma are skillfully manipulated to cause the child’s failure to evoke so much more, to truly present (in the way Ezra Pound used that word) the image of those fireflies.

Rachelle Bowser enters the poem with an extremely striking line that comprises an entire stanza, and continues to introduce new replications of reality in every stanza to follow. This poem keeps the reader on their toes by moving through layers of time and space before settling on the realization that everything—without exception—is ephemeral. 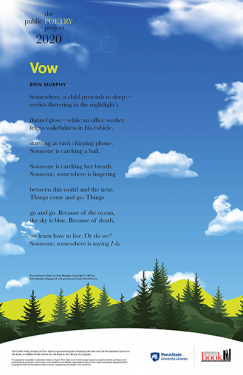 Somewhere, a child pretends to sleep—
eyelids fluttering in the nightlight’s

flannel glow—while an office worker
feigns wakefulness in his cubicle,

startling at each chirping phone.
Someone is catching a ball.

Someone is catching her breath.
Someone, somewhere is lingering

between this world and the next.
Things come and go. Things

we learn how to live. Or do we?
Someone, somewhere is saying I do.

From Distant Glitter by Erin Murphy. Copyright © 2013 by
Erin Murphy. Reprinted with permission from Word Poetry.

This poem’s cast of characters are handled deftly to allow the final assertion to be wonderfully ambiguous.

The way that this poem acknowledges life is both truthful and imaginative. This poem points at a reality that is constantly haunting us like a shadow, a reality that is so often forgotten or ignored or forced away instead of confronted. “Vow” does this work with a striking subtlety and a reassured quotidian that pushes the poem forward every line.